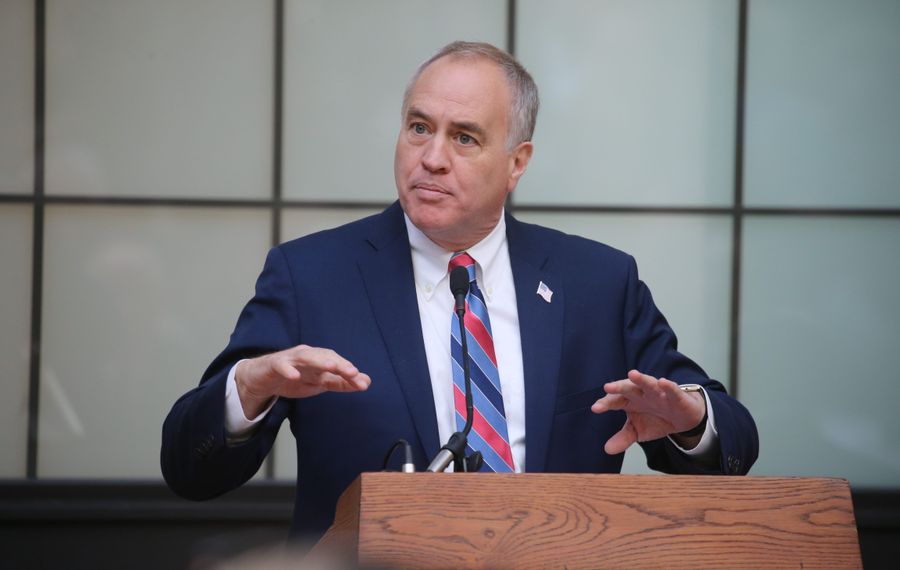 ALBANY – The state’s chief fiscal watchdog has rejected the no-bid purchase of a $12.5 million helicopter intended for the State Police but also to ferry Gov. Andrew Cuomo around the state.

Cuomo administration officials, however, insisted that the purchase effort for the Sikorsky S76-D is still underway and that they are in the process of answering Comptroller Thomas DiNapoli’s questions.

The situation, though, can be expected to further heighten tensions between Cuomo and DiNapoli, whose office last week turned down the plan to use a non-competitive bidding process to purchase a new state helicopter. Cuomo and DiNapoli have had chilly relations for years, and the comptroller has issued several scathing audits and reports pertaining to Cuomo administration agencies.

The contract requested for a Sikorsky S76-D helicopter came from the State Police, which said it was needed to provide state-of-the-art emergency response and law enforcement missions, as well as to transport Cuomo. State Police described it as the only helicopter on the market today that meets various mission needs.

Cuomo administration officials said the state will save nearly $4 million by purchasing a used model of the S76-D over a new model or used-though-not-flown model.

"This helicopter is the first to be purchased by State Police in nearly 15 years, will be done so at a significant savings to taxpayers, and be able to fulfill a ‎greater range of missions, as well as have a greater capacity than the aircraft it's replacing. We met with the Comptroller's Office last week (to) ... address any and all of their questions. We're in the process of providing additional documentation and have every reason to believe this ‎purchase will be approved," said Beau Duffy, a State Police spokesman.

Thomas Mungeer, president of the New York State Troopers PBA, said the agency is operating a rapidly aging air fleet for "far too long." He said the new helicopter will bring the agency's air fleet back up to full strength. "To us, this is an issue of public safety plain and simple, and red tape shouldn't hold this up," he said.

But DiNapoli’s office declined to approve the purchase partly because it said the State Police failed to explain how the aircraft’s interior could be modified from its present “deluxe VIP interior group” configuration to an interior for specific law enforcement or rescue missions.

“It is unclear how this helicopter could be efficiently used for these other missions,’’ the state comptroller’s office wrote to the State Police in a letter dated Nov. 29.

Administration officials dismissed those concerns, noting that the cabin configuration does not change when a police helicopter is used to search for missing people or fleeing crime suspects. Nor does it change for vehicle safety and speed enforcement missions or for locating illegal marijuana farm operations in rural areas.

Moreover, they said the Sikorsky, unlike the 13 other helicopters in the State Police fleet, has the capacity – with a range of 378 statute miles – to cross the state without re-fueling. And that will permit pilots on search missions to remain in the air for longer amounts of time than the current fleet, they said.

A copy of the rejection letter, along with a redacted contract and sales brochure records, were obtained by The Buffalo News under the state’s Freedom of Information Law.

After the Nov. 29 rejection letter was received, a conference call was held involving the comptroller’s office, State Police and the Office of General Services, Cuomo administration officials said. The administration said it came away confident that the helicopter’s purchase will be approved when it supplies DiNapoli’s office with additional information, such as an appraisal of the helicopter to show that the state is getting a good deal with the aircraft it selected. Administration officials said several other aircraft were evaluated and the State Police determined the S76-D model would fit a broad range of uses.

Cuomo now uses one of the State Police’s Bell 430 helicopters. Four were purchased during the Pataki Administration in 2001 and 2002 for $5 million each.

The governor uses the helicopter for shorter flights, such as between Albany and an airport near his home in Westchester County or from a helipad in Manhattan to events on Long Island. On longer flights, Cuomo has a State Police turboprop airplane at his disposal, which he used to attend events in Hornell and Rochester earlier this week.

The Sikorsky helicopter would be much faster and quieter than the Bell 430 Cuomo uses, according to Sikorsky. The helicopter has additional features to fly in bad weather, according to company information. The S76-D helicopter is sold around the world for a variety of uses, including executive transport as well as search and rescue missions, medevac and for transporting oil platform workers.

Besides sophisticated flight and safety systems, the helicopter's cabin also features a 15-inch LCD monitor, wood veneer sidewall trim and custom upholstery with "French stitching.'' Funding for the helicopter purchase was approved in the 2013 state budget. The specific aircraft the State Police wants is a used, demonstrator model. It was built in May 2013, has flown 335 hours and is currently kept at the Dutchess County airport near Poughkeepsie.

In its rejection letter, the comptroller’s office said that the State Police originally said it wanted to purchase the Sikorsky because of an “increase in incidents” and lack of certain technology on the Bell 430 models it now owns. In an amended request, the agency said the helicopter is needed as a replacement for a Bell 430 model that was heavily damaged during a forced landing in 2012.

The comptroller’s office said the agency failed to explain “how rapid changes could be made to the interior of a helicopter from executive configuration to missions such as rescue or medevac.’’ It added that $12.5 million cost justification was “insufficient” to ensure that the state is getting a helicopter with a “reasonable” price.

It noted, for instance, the contract failed to provide a list of the lifespan and costs of some parts that might have to be replaced at some point soon on a helicopter built three years ago. The fiscal office said additional costs for items the State Police might want for the aircraft could drive up the overall price tag beyond the $12.5 million purchase price.

The Sikorsky sales document for the model states that the interior cabin can be reconfigured from its present use. It does not address the concerns DiNapoli’s office raised about what might be involved with such a reconfiguration.

In a September letter to the comptroller’s office, the State Police warned about the safety of its aging Bell 430 fleet, considered the agency’s aviation workhorses and noted that there has been an increase in emergency landings with them in the past year. The agency has not purchased a helicopter since 2002.

In March, the most recent month available for the governor’s public schedule, Cuomo used a state helicopter for 12 separate flights.