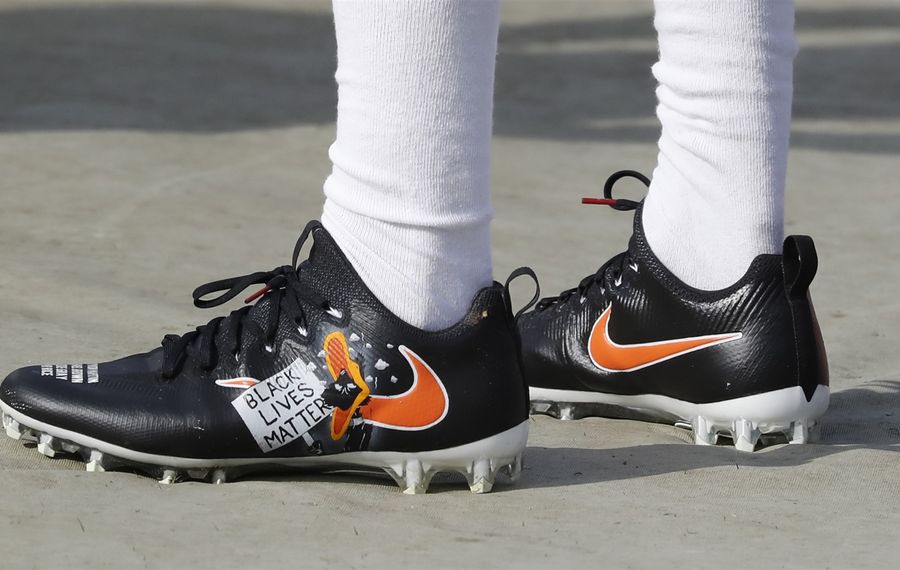 NFL players were allowed to wear customized cleats this weekend during the league's "My Cause, My Cleats" campaign. While one member of the Bills insinuated he was talked out of wearing cleats in support of the Black Lives Matter movement, at least two others went ahead with their designs.

Bills safety Corey Graham, a Buffalo native, wore blue cleats with a picture of Trayvon Martin on the toe and the words "Black Lives Matter" along the side. They also featured the dates of Martin's birth and death on the heels.

I present you with the pair of cleats for #20 of the Bills, Corey Graham. First pair of shoes done that aren't Vans or canvas 😂 A nice pair of #BLM shoes with Trayvon Martin on the front for awareness week. Check them out this Sunday on the big screen 😈😈😈😈😈 #Bills #BuffaLove #BuffaloBills #Sports #CustomShoes #awarenessweek #Angelus #AngelusPaint

Some people wrote in the comments that they were unfollowing Brown after his post. "[T]hank u guys for your support thus far. Regardless I never wish death on anyone. Sorry if u think anyone deserves that," Brown replied.

[View all photos from the Bills-Raiders game here]

The News' Tim Graham reported last week that several other players initially planned to wear Black Lives Matter cleats but didn't end up wearing them, for various reasons. Some of the players were injured. Linebacker Lorenzo Alexander changed his mind because he and his wife feared backlash for their children at school.

"The team was actually behind it, which was surprising," Bills outside linebacker Lorenzo Alexander said. "But you don't want to distract from what we're trying to accomplish here."

Alexander was among the Black Lives Matter group but decided to switch after discussing it with his wife. They feared backlash for their children at school.

"When you look at the news and see social media, crazy stuff is happening, especially with the turmoil our country's in right now," Alexander said. "So I backed off from it.

Graham reported that receiver Marquise Goodwin "insinuated the plug was pulled on him."

"I'm very disappointed," Goodwin said. "I wanted to take a stand. I wanted to show I feel that people are hurting in the world, people who are suffering. I can't turn a blind eye to it.

"At the same time, I've sacrificed a lot to get to where I am, and I don't want to watch it go down the drain. I appreciate there's a time and a place to speak out, and I want to do that in a respectful manner."

But Corey Graham was undeterred.

Fabes Sole High customized two pairs for Graham, who noted he received zero pushback about his cause.

"It's important," Graham said. "I'm not going to kneel during the national anthem, but when the NFL gives you an opportunity to wear something with meaning, when you got people getting murdered without accountability, you want to bring awareness.

"This is an issue that needs to be addressed."