More than 40 residents of the Elmwood Village area turned out Monday night, mostly in opposition, as the city Planning Board took public comment on a proposed $30 million condo project on Elmwood Avenue.

While most remained silent during the hour-long public hearing, more than a dozen people testified before the seven-member board, with opponents outnumbering supporters by a 2-1 margin. Both sides targeted the same factors, but from opposite viewpoints.

Critics focused their attention primarily on the size and scale of the proposed building, which they said did not belong on Elmwood and would harm the more intimate character of the neighborhood. They also attacked developer Chason Affinity Companies for ignoring the wishes of the community.

"The project makes no attempt to respect the needs of the community," said Laurie Stillwell of Preservation Buffalo Niagara. "Preservation is not only about protecting a single building, but about preserving the overall form and character."

Ironically, those in favor cited the very same scale as among the benefits of the project, bringing more needed residents and retail space to the street. Supporters also praised the developer for taking time to listen to and work with neighbors, and for designing a project that they said would improve the street.

"I’m not aware of any developer or architectural firm that has done so much to address the concerns of the residents around the proposed project," said Anthony Krayna of Jersey Street, a former city assessor. "They've gone out of their way to make something so attractive."

"This project is actually very sensitive. The building is also economically and socially responsible," said Alex Bitterman, a longtime homeowner on Granger, who chairs the Department of Design and Architecture at Alfred State College. "No development in the last 20 years has been this responsible or responsive to citizen requests and feedback."

In the end, a representative of the project team said the comments were generally expected. "It’s the same refrain: the building’s too tall," said Steve Carmina, principal of Carmina Wood Morris PC and architect on the project. "People plant themselves in the height of the building, which is the root of the argument they make to say the building is bad. But the height is good. There's smart density and there's dumb density. This is good density."

But the manner in which the comments were delivered was a pleasant surprise. "It was very polite. I don’t remember being at a public hearing like this with this many people and having such politeness," he said. 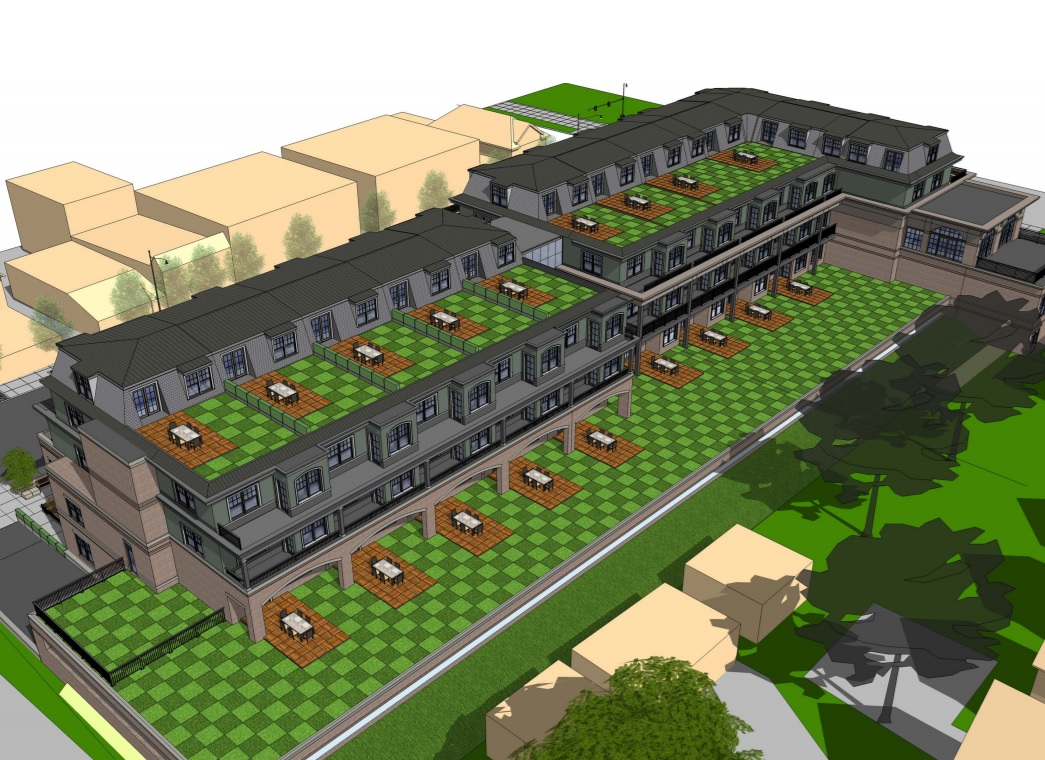 An aerial view of the backyard roof terraces at the proposed development at Elmwood and Forest avenues.

The family-owned Chason Affinity wants to construct a new five-story brick-and-brownstone building at 1111 Elmwood Ave., on a 1.1-acre stretch of 12 properties from Pano's Restaurant to just below Forest Avenue. The project calls for up to 50 for-sale condominium units, including seven walk-up townhomes, concentrated on the south end, plus three 2,500-square-foot retail storefronts on the ground floor of the north end. The one-, two- and three-bedroom condos would range in size from 1,400 to 3,100 square feet, but prices have not yet been determined.

"The intent of this project is to bring people and vibrancy to an area of my neighborhood that has been sorely lacking for some time," said Steven J. Ricca, a land use attorney at Bond Schoeneck & King, who represents Chason and also lives in the Elmwood Village. "We're here to meet a demand that is undeniable."

The design features a significant amount of brick as well as pre-cast concrete bands and accents, in different patterns, with a mansard-style slate roof featuring dormers to echo the look of other nearby buildings. The top two floors are actually set back further from the street than the lower three levels, in a bid to reduce the visual impact on the street, while they tier down along Forest and next to Pano's Restaurant on Elmwood.

Even so, it's been controversial because of its height, and because it requires the demolition of 12 structures – nine houses on Elmwood, one in an alley and two on Forest, where the building wraps around the corner. Opponents argued that those structures are historic, and should be renovated and reused, not taken down.

"The developer believes this is insignificant and that these structures have no meaning historically," said Arthur Giacalone, a land-use and environmental attorney, and frequent critic of many development projects. "They do. They are part of a neighborhood that has been intact for more than a century."

And despite the effort to appease neighbors through the setback, materials, greenspace and architectural design, critics say the scale of the project simply doesn't belong on Elmwood, where residents have advocated strongly for a limit of no more than three stories for any new development in the low-rise area. "This is so out of proportion that it cannot be treated as something consistent with the Elmwood Village and what the Elmwood Village stands for," Giacalone said.

They also say it would violate the current Elmwood building standards and the proposed Green Code, which includes such a cap but has not yet taken effect. "I think Mr. Chason and his group have done a wonderful job, and it’s a beautiful building," said Martin Littlefield of Argyle Street, chairman of the Elmwood Village Working Group. "But under the law, it’s required to be a three-story building and 40 feet."

Chason previously proposed an eight-story, 240,000-square-foot hotel with 120 rooms and street-level retail on the site in 2011, but that was shot down after strenuous neighborhood opposition and a lawsuit.

As part of the approval process, Chason submitted a draft environmental impact statement. A comment period on the project and statement extends until Dec. 19, but the environmental review is likely to last into January as the final report is prepared. The project also needs three zoning variances and a restricted-use permit from the Common Council for demolition in the Elmwood Business District. If approved, work could begin in the spring, lasting 18 months.