A red ale with strong traditional roots, one that until recently had been available in only a few pubs in Ireland, is now available in a North American city.

Luckily for beer lovers, it’s nearby.

“Buffalo is the only other place on the planet where you can get it,” Ian Hamilton, a former Guinness beermaker, said of Sullivan’s Maltings Irish Ale.

Hamilton is part of a small group of Sullivan’s Brewing Co. officials who have spent the past week or so in Buffalo, getting to know the city, its taverns and its craft breweries.

They came at the invitation of Michael Meade, a 1987 Canisius High School graduate who has become a major cog in the plan to return brewing to Kilkenny, Ireland, but in the meantime is behind the arrival of Maltings to several local taverns in his hometown.

“I believe in doing all that we can to continue giving our region a shot in the arm and helping contribute to the renaissance of Western New York,” he said.

Sullivan’s Maltings Irish Ale is now available on tap at Blackthorn Restaurant and Pub, Conlon’s Bar & Grill, and Doc Sullivan’s in South Buffalo; Coles, Colter Bay, Gabriel’s Gate, and the Lenox Grill near or along Delaware or Elmwood avenues in the city; and Brennan’s Bowery Bar & Restaurant in Clarence. It runs $5 to $7 per pour. 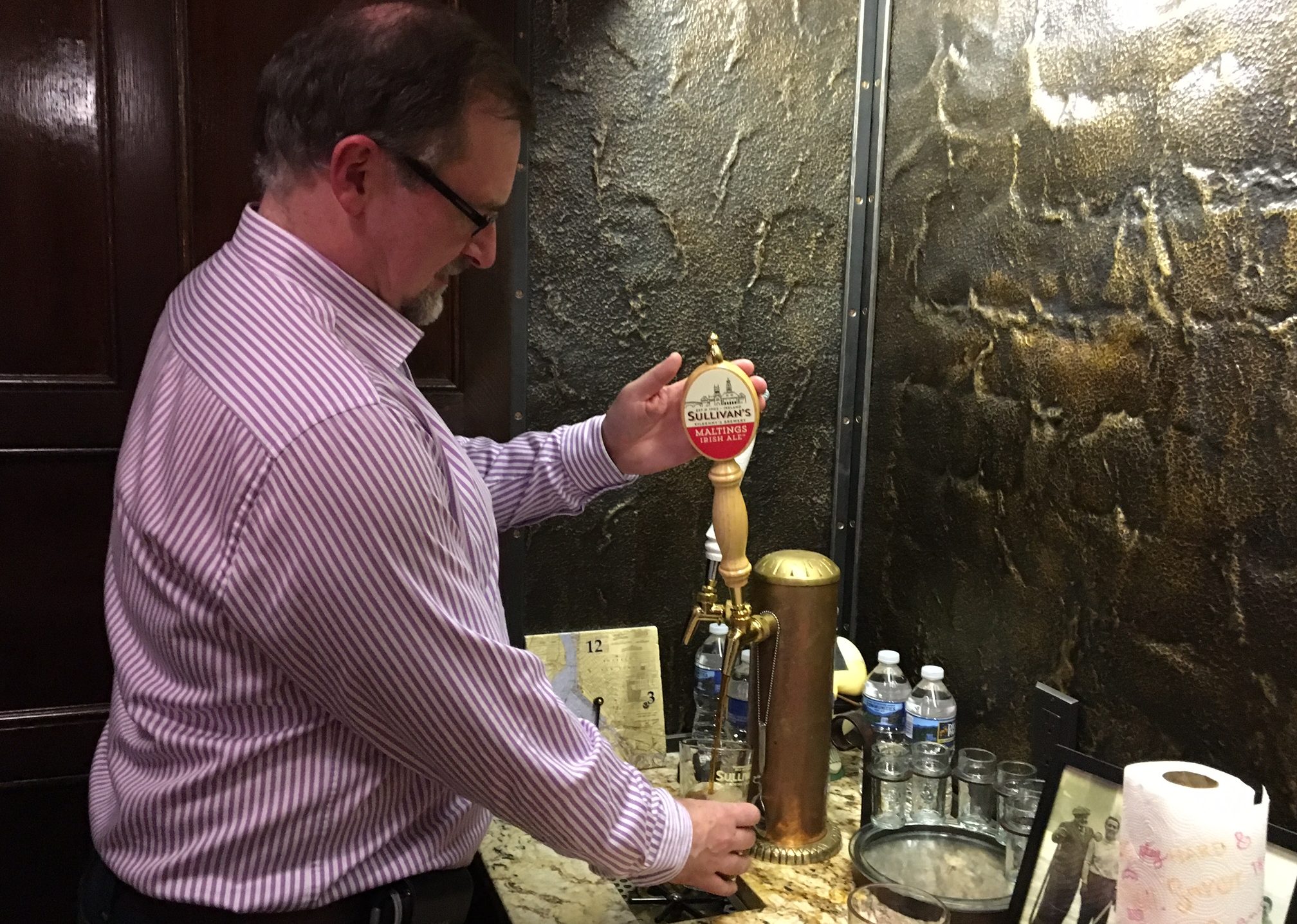 Sullivan's Brewing Co. Master Brewer Ian Hamilton pours a pint in Buffalo of a beer he designed and brewed for a new Kilkenny beer venture.

The Irishmen involved in the venture shipped beer to Buffalo – in recyclable plastic kegs – and will keep sending it from overseas as demand dictates. The goal is to bring the beer into the Great Lakes states, said brewing company CEO Alan Quane, who has worked for nearly three decades in the confections and brewery industries, including from 1991 to 2003 in Toronto.

“But it has more complexity, more body,” Hamilton said, because of its rich biscuit and subtle caramel notes.

Members of the Smithwick clan are working to build a permanent brewery in County Kilkenny’s principal city, but they already have crafted the new ale and made it available in trendy entertainment districts in Dublin and Kilkenny.

And now Buffalo beer-lovers can have a pint in their own backyard.

On Saturday, Meade opened his Delaware Avenue brownstone – the former Stella Lowry House – for the first official tasting of the new Sullivan’s brew.

There’s a reason that’s the name and not Smithwick’s, and it’s the kind of yarn best told over a pint. Or two. 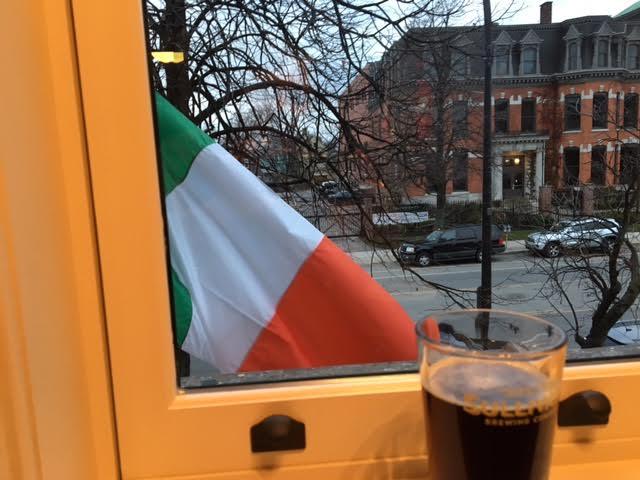 Kilkenny has been known as the cradle of Celtic craft brewing since the 13th century, when Franciscan monks brought beer from Italy to the Emerald Isle at a time when poor water quality gave them good reason to offer an alternative beverage. The Sullivan family started making beers in the southeastern Irish city in 1702; the Smithwick family in 1710.

Competition between the two breweries was keen but cordial. Members of the two families became close friends, and in some cases even spouses. They helped many a Kilkenny family survive the Great Famine of the 1840s and ‘50s.

A controlling Sullivan family member wagered away that family's brewery on a horse race in 1918 and the Smithwick family soon after came to the rescue by taking control of the Sullivan’s workforce and rights to the brewing company’s name.

In 1965, the Smithwick family sold its company – including its name and trademark – to Guinness, which kept open the Kilkenny brewery until 2014, when it consolidated its Irish operations to Dublin. The Smithwick family, however, kept control of the Sullivan’s brewery name.

When descendants Paul and Dan Smithwick decided to jump back into the family business earlier this year, and return a brewery to their city, they revived the Sullivan name for the enterprise.

The owners are in the midst of choosing a site for a new brewery on the outskirts of Kilkenny. They aim to open next year. Meanwhile, Hamilton is brewing Sullivan’s Maltings Irish Ale under contract at the Boyne Brewhouse in Drogheda, County Meath, about 110 miles to the north, above Dublin.

Sullivan’s will become a 30-hectoliter brewery – roughly the size of Western New York craft beermakers that include New York Beer Project, 12 Gates and, before its recent expansion, Big Ditch.

Meade, managing director at Citi Bank, lives in New York City most of the year but visits Buffalo at least once a month. He travels regularly to Ireland, where he owns a cottage in County Limerick. He has invested in other Buffalo ventures, including the former Coffee Culture.

When he got wind of the Sullivan’s brewery project, he asked to become involved – and brought in 14 investors to help, including two other Canisius High School alums. 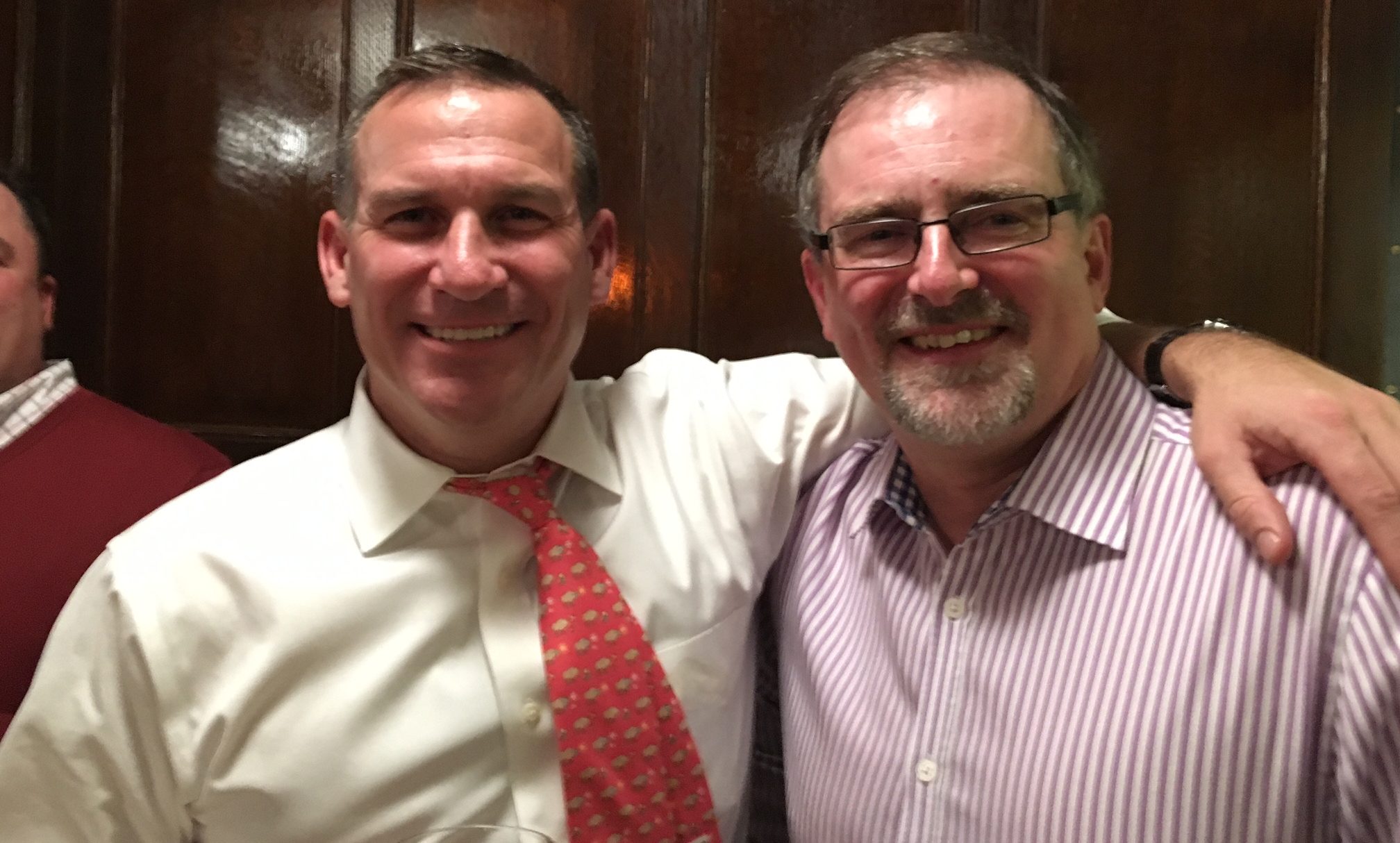 Buffalo is a natural conduit into the U.S. market for a Kilkenny-based ale, Hamilton and Quane said, and not only because of Meade’s involvement – though it helped.

The city of Kilkenny – with a population about 20,000, in a county of nearly 100,000 – boasts a reputation as a spot with hardworking sports enthusiasts. Its hurling team is a perennial Irish powerhouse in a traditional Gaelic sport that includes elements of lacrosse and baseball.

Like Buffalo, Kilkenny fell on hard times in recent decades and is on the front end of a revival.

Hamilton for more than three decades has brewed red ales, stouts and Budweiser for Smithwick’s and Guinness in Europe and Africa. He liked what he’s seen – and tasted – during visits in recent days to the Big Ditch, Flying Bison, Resurgence and Thin Man breweries.