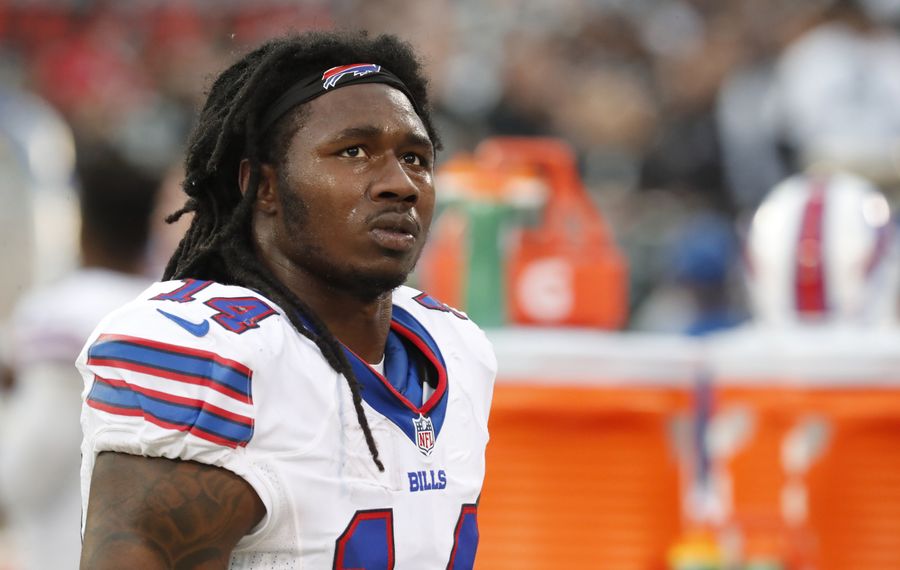 When the Buffalo Bills revealed this year's promotional slogan, all I could think of were the ways it would backfire.

It's a double entendre. The fan base is unfailingly loyal, and the team sure does love to hand off.

As does the pain.

You have to go back a lot of years to remember when the Bills regularly thrilled their fans. The last of the Super Bowl years is nearing its silver anniversary. They are on the verge of missing the playoffs a 17th straight season.

But the Bills are running the ball better than they ever have. Statistically speaking, the 2016 Bills run it better than when they fed O.J. Simpson, Thurman Thomas, Cookie Gilchrist, Joe Cribbs, you name it.

The Bills once had Marshawn Lynch, Fred Jackson and C.J. Spiller on the same roster. This year's Bills are more productive than they were.

We were reminded again in Sunday's disturbing 38-24 loss to the Oakland Raiders that the Bills' offense can't continue to live in the 1970s and expect to thrive in today's NFL.

Did you know the Bills have recorded five straight 150-yard rushing games, their longest streak since Simpson ran behind the Electric Company back in 1975?

Did you know the Bills have scored 23 rushing touchdowns, also the most since 1975? The Bills have played 12 games, yet they're approaching ground attack records that were set when the NFL played a 14-game schedule.

While it's true the Bills have won half of their games, they have a solitary victory over an opponent with a winning record. That was against the New England Patriots' third-string quarterback.

Good teams beat the Bills, and in games like Sunday's or against the Patriots with Tom Brady, the Bills show they aren't within sniffing distance of the NFL's top teams.

The Bills went into Week 12 with a lopsided percentage of their offense coming from the run.

The average NFL team derives 30.2 percent of its offense by running. The Bills lead the NFL at 47.1 percent. Next closest are the dreadful San Francisco 49ers at 41.2 percent.

But the receiving corps is scrawny. As mentioned in this space before, Bills General Manager Doug Whaley has done his team no favors by forcing it to evaluate Taylor's contract this way.

Taylor made mistakes Sunday. He was inaccurate in the second half, but he also began with eight completions on nine attempts for 102 yards. He didn't throw his second incompletion until 7:26 before halftime even though his top two receivers, Robert Woods (knee injury) and Charles Clay (stayed back for the birth of his first child), didn't play. Neither did Percy Harvin, absent a second straight game because of migraine headaches.

Watkins, still playing through foot discomfort, had two receptions for 32 yards on Buffalo's first two plays. The rest of the game Watkins made one catch for 6 yards despite being targeted seven more times. He has missed a lot of practice, and the lack of chemistry with Taylor was obvious.

LeSean McCoy, in addition to a game-high 130 rushing yards, led Buffalo with seven catches for 61 yards. Marquise Goodwin had four receptions for 35 yards.

Nobody else caught more than one pass.

The Bills are so good at running the ball that a scrapheap discovery such as Mike Gillislee can run eight times for 49 yards and two touchdowns.

But after Gillislee gave the Bills a 24-9 lead with 9:01 left in the third quarter, the Raiders finally figured out how to take away the run.

The Raiders zipped through the Bills' defense -- an abysmal punt unit offered no help -- with 29 unanswered points over the final 20:17.

The Bills' offense is built to run deep, nice and methodical, slow and steady. They're not designed to rally late, underscored by offensive coordinator Anthony Lynn's leisurely pace in the closing minutes.

Lynn's predecessor, Greg Roman, also was a dawdler. That leads me to believe unhurried is how Rex Ryan coaches it, the way Whaley's roster is built.

They're also running behind the rest of the NFL. You wonder if they'll ever catch up.

At the end of the third quarter and into the fourth quarter, Oakland held a 21-6 edge on Buffalo.

That would be an ugly margin if we were referring to just points.

Alas, that was 21 points for Oakland, six offensive plays for Buffalo. Over those six plays, the Bills gained 6 yards.

Mack, the University at Buffalo monster, got off to a pedestrian start. Mack looked helpless when, one play after McCoy ripped a 54-yard run on the first play of the second half, Taylor faked a handoff to Gillislee and ran right around Mack for a 12-yard touchdown.

But Mack's final stat line showed his impact. He had seven tackles, one for a loss, a strip-sack and a fumble recovery on the Bills' final possession in addition to the tipped pass that turned into a Nate Allen interception.

The Raiders were 0-72 over the past 15 years when trailing by at least 15 points.

And the Bills still haven't won in Oakland since 1966.

Position coaches generally are overrated. They're only as good as the material at their disposal.

Take, for instance, Oakland quarterbacks coach Todd Downing. I'm sure he's been helpful to MVP candidate Derek Carr, who finished 19 of 35 for 260 yards and two touchdowns (should have been three, but Michael Crabtree dropped one) and no turnovers.

Downing also coached EJ Manuel in 2014. That was Doug Marrone's last season, when Buffalo had to sign Kyle Orton off the street right before the season began.

Brady won his 201st game, an NFL record for regular season and playoffs. He's playing at an MVP level, so expect that number to soar well past Peyton Manning's mark.

How far back must the Bills go to count up 201 victories?

October 1991, when Brady was 14 years old and the Bills were working toward their second Super Bowl appearance.

Also worth noting: A knee injury sidelined Brady 15 games in 2008.

With four games left, the Bills are 6-6. They are ninth in the AFC and two games out of the second wild-card spot entering Monday night's game. The Indianapolis Colts also will be 6-6 if they beat the New York Jets.

The AFC West remains in control of the wild cards. The Kansas City Chiefs and Denver Broncos won Sunday. So did the Baltimore Ravens and Pittsburgh Steelers. Each is 7-5, keeping the second-place AFC North team in better standing than the Bills.

The Bills remaining games are against the Steelers at home, the Cleveland Browns at home, the Miami Dolphins at home and the New York Jets at the Meadowlands.