The fate of Buffalo's Central Terminal could be shaped as much by the people who would live there as by those catching trains.

Indeed, while Toronto developer Harry Stinson envisions the return of trains to the abandoned art deco marvel he wants to redevelop on the East Side, his plan doesn't depend on them.

Stinson recently received a six-month extension as designated developer by both the City of Buffalo and the Central Terminal Restoration Corp., which owns the former station, to fine-tune his plan, woo investors and negotiate property transfers.

Can Stinson succeed? It's such a daunting challenge that no one until now has seriously attempted it since the last Amtrak train pulled out of the Central Terminal in 1979.

Much must happen for this project to become a reality. Still, Stinson, who has had successes in Toronto and Hamilton, remains confident. The project carries a $150 million to $200 million price tag over a five-year time frame.

"It is the most exciting project I’ve ever been involved in, and I can’t wait to get started," Stinson said. "I think it’s viable. The members of the team are good, they’re competent, they’re credible, and they would not be doing this publicly if they thought it wouldn't work."

"I have rarely been involved in a project that has had so much of its own momentum, and where people are openly enthusiastic," Stinson said.

Those who are pulling for him to succeed are encouraged by how a lot of things that once seemed unlikely in Buffalo – from rehabbing the Richardson Olmsted Complex to reviving the waterfront – have occurred in recent years.

The next four to six months will likely determine if Stinson can scale what many see as Buffalo's last mighty mountain to climb – a train station he likens to "a movie set." 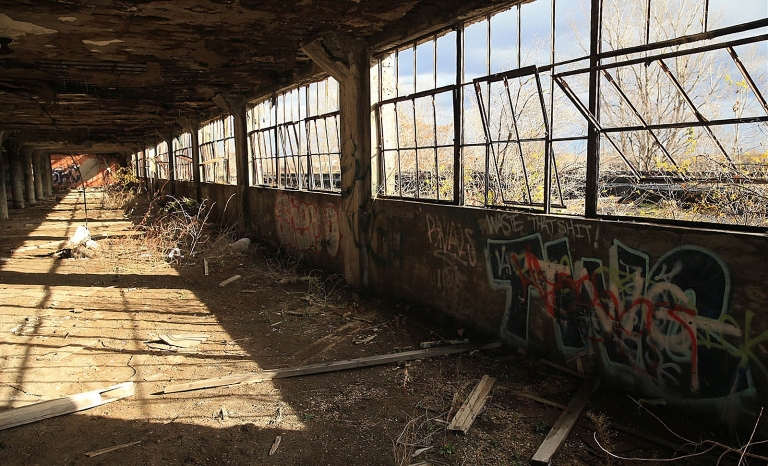 Loft-style housing would be in what remains of the former Railway Express Agency Building. (John Hickey/Buffalo News)

The project has two main parts: reusing the Central Terminal, as well as building row houses and lofts in the area around the terminal tentatively called Buffalo Central.

The station's 17-story tower would be used for commercial office space. The four-story baggage building would become a 179-room hotel. And the concourse would feature entertainment/event spaces, for weddings, receptions, trade shows, parties and other large gatherings. Retail stores and restaurants, including the recreation of an art deco restaurant, would be part of the mix. 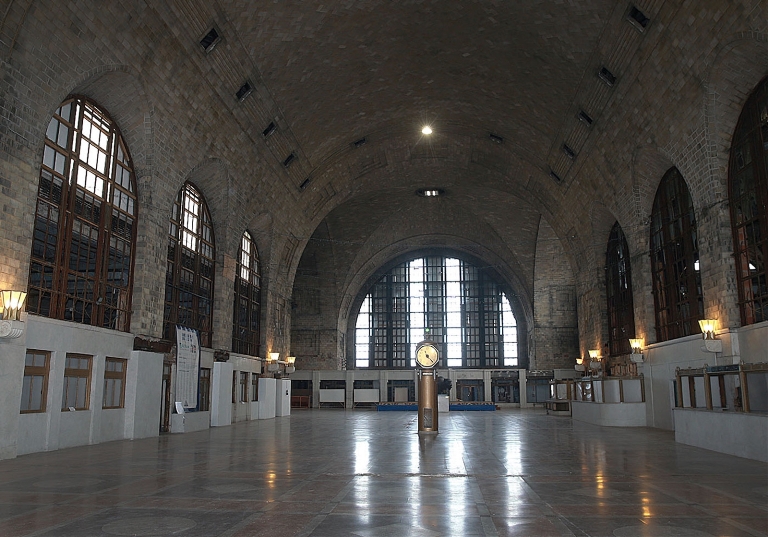 Developer Harry Stinson envisions the Central Terminal as a transportation hub, with a shuttle service connecting people to downtown, the Medical Campus and the airport. (John Hickey/Buffalo News)

Stinson's plan also calls for a transportation hub for trains, buses, vehicles and taxis.  A shuttle service would connect people to downtown, the medical corridor and the airport.

If successful, Stinson's plan would make full use of one of Buffalo's architecturally significant structures. Potentially thousands of construction jobs and hundreds of permanent jobs would be created. Many now consider Buffalo to be going through a renaissance, and it could be the time has arrived for the Central Terminal's second act.

But the surrounding Broadway-Fillmore neighborhood, with too many dilapidated and boarded-up homes and streets pockmarked with empty lots, has been a deterrent for investment. It could be so again. 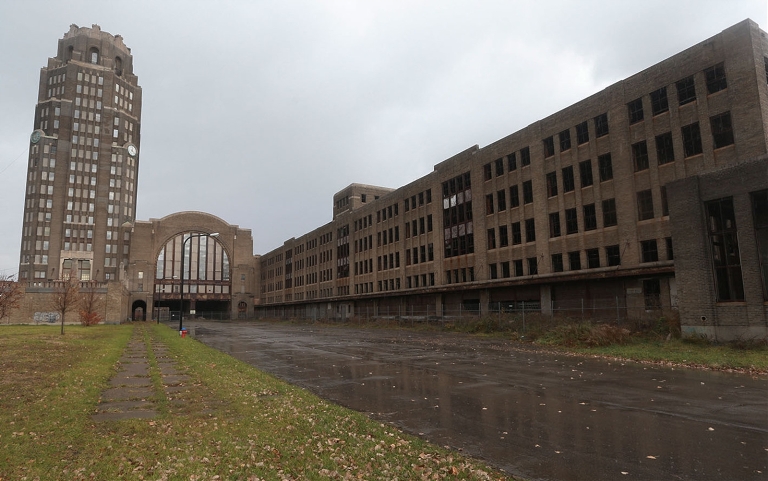 Designated developer Harry Stinson has plans for the Central Terminal, which include a hotel in the baggage building, right. (John Hickey/Buffalo News)

The neighborhood's  nearly three-mile distance from downtown and the challenge of developing a 523,000-square-foot brick and masonry complex – the size of nine football fields – has discouraged development in the past. So has the extensive stabilization and restoration work that's needed.

The focus on housing is a new component. The plan calls for a high-density, low-rise neighborhood of  418 one-, two- and three-story residential units in new and existing buildings.

Row houses would be built as a more modern version of the worker houses in the neighborhood.  The former shed-like REA Express Building that stretches along Curtiss Street, near an area where the city dumps snow,  would have 120 residential lofts. And 94 lofts would be built by the shipping and receiving rail platforms. There would also be 84 one- and two-bedroom flat-style apartments.

A two-story baggage building has been set aside for commercial businesses, including a potential food market to complement the nearby Broadway Market.

"The key to this whole renaissance is the use of the land and the environment around the terminal," Stinson said. "Whether it’s the restoration of the Broadway-Fillmore neighborhood or re-purposing of some of the industrial lands, we have to address the area. The more population that’s there, the more Broadway-Fillmore will revive."

Tree-lined streetscapes would be recreated, and a recreational green space established adjacent to the tower for use by the neighborhood.

Prices would range from affordable to upscale, with the target audience being urban professionals, empty nesters and others moving in from the suburbs, and small families.

The developer counts on the synergy of a residential component to be a catalyst for the Central Terminal's renewal, and to make the project financially sustainable. Stinson's vision also calls for infrastructure and other improvements to be made in tandem in the surrounding neighborhood. 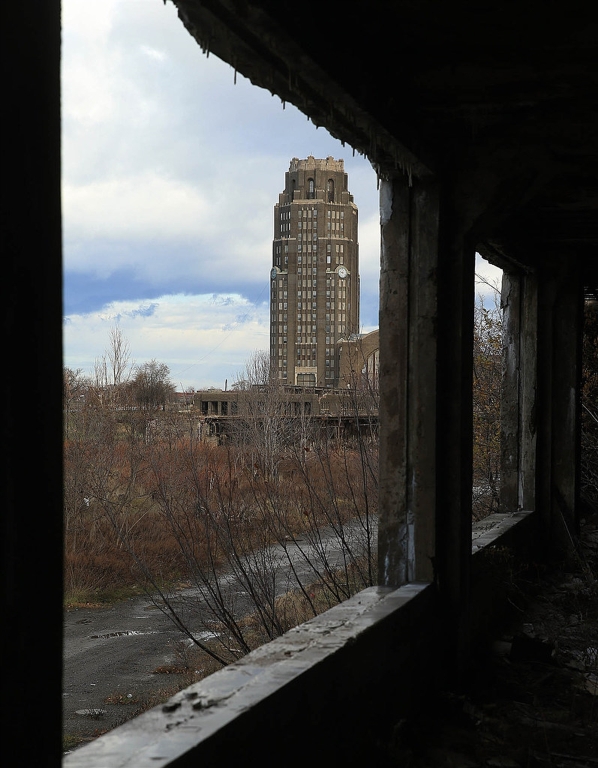 Revival of the area around the Central Terminal will be key to the success of his project, developer Harry Stinson says: "You don’t like being a pioneer in the middle of nowhere." (John Hickey/Buffalo News)

"The first thing people bring up is the neighborhood, because it looks a bit forlorn," Stinson said. "You travel through some derelict areas to get to it, and that causes people to hesitate. You don’t like being a pioneer in the middle of nowhere."

But Stinson sees potential in the neighborhood.

"When you’re from out of town, you have to look at things on their own merits – and you actually have to go and look at them," Stinson said. "There are people who have opinions about the neighborhood who haven’t been there in decades, so they perhaps have a jaded view. I saw this in Toronto and Hamilton. I've been through it time after time in other areas that were uncannily similar."

The project would benefit from historic tax credits for the Central Terminal, which is on the National Register of Historic Places, and from brownfield tax credits, since significant environmental remediation would be necessary. Together, the tax credits would offset about 25 percent of the project's total cost, according to Adam Walters,  a partner with Phillips Lytle.

"I think this project is incredibly doable," Walters said. "I look at Larkinville as the example, a significant investment outside of the downtown core in an area that everybody viewed as long neglected. I see nothing but opportunity and success. I think the time is right, and Buffalo is ready."

Stinson and his team have held a number of community meetings on the East Side.

Stephen Fitzmaurice, an adviser for Stinson, said most residents came to the meetings fearing the project will be a gated community, and they left expressing encouragement and excitement.

"We show them we're not building McMansions," Fitzmaurice said.

Marva Threat, president of the Greater East Side Fields of Dreams Block Association, which covers an 11-block area near the station, said the group was encouraged by what it heard.

"What they showed us was very interesting," Threat said. "We felt it would be good for the community."

Stinson has had success developing condominiums, beginning in the early 1990s in Toronto with the Candy Factory Lofts, High Parks Lofts and 1 King West.

He's also had failures. Stinson's 1 King West hotel and condominium went into receivership in 2007, triggering a controversial court battle with theater impresario and former partner David Mirvish. He bought the Hotel Niagara in Niagara Falls several years ago, but despite predictions of success proved unable to get the necessary financing for a project minuscule in scale compared to what he's attempting with the Central Terminal.

More recently, Stinson developed the Stinson School Lofts in downtown Hamilton, where he is involved in three other housing projects.

Fitzmaurice, the former chief operating officer for One HSBC Center, is on the development team that also includes the architectural firm Carmina Wood Morris architectural firm, Phillips Lytle law firm, LiRo Group for environmental engineering, Cannon Heyman and Weiss for historic tax credits and Bolton St. Johns for government relations. Those hired by Stinson are respected and well-connected, and should be a major asset in moving his project forward.

But the project looms as a Herculean challenge. It would be for any developer, and only a year ago Stinson threw in the towel on the uncompleted Hotel Niagara.

His prospects at the Central Terminal will come down to whether he can attract the investors to help bring his vision into reality. 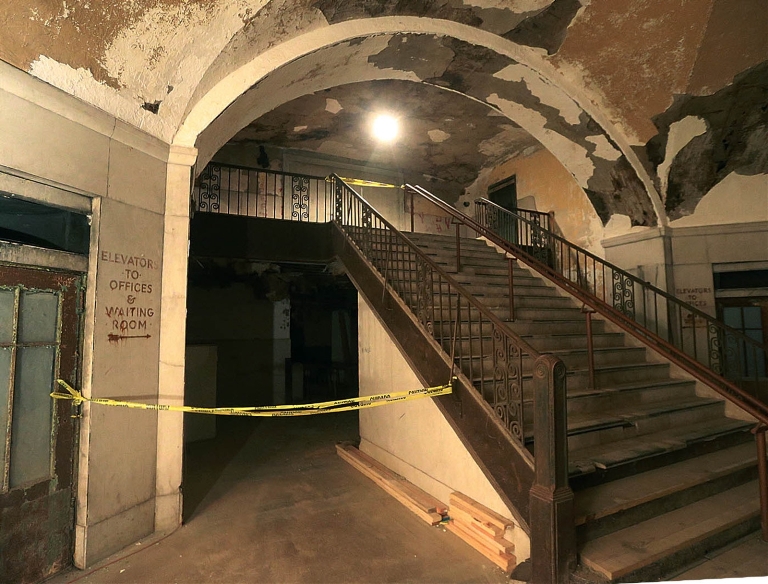 The Central Terminal has long been considered one of Buffalo's most architecturally significant buildings. The art deco train palace opened in 1929, built by esteemed railroad architects Alfred Fellheimer and Steward Wagner, who also designed the art deco Cincinnati Union Terminal. Visitors to Buffalo from other parts of the United States, and other parts of the world, often make the trek to see it.

"Every time I’m there, there are people knocking on the door trying to come in," Stinson said.  "These are people who come from all over. It really is a destination."

The building has an undeniable "cool" factor. Bringing activity and sparkle back to the Central Terminal would be a major event for a city that prides itself on being an architectural mecca and markets itself as one.

"Going to the Central Terminal will be no different than going to a show at Shea’s, where the theater is a part of the show," Stinson said.

"There is no way this can be financed based on good will and letters of intent," Stinson said. "You can’t finance something you don’t control."

Both the city and the restoration group say they're working in lockstep.

"We are satisfied with the progress, and to be involved in this level of discussion," said Paul Lang, an architect on the project who is also vice chairman of the Central Terminal Restoration Corp.

His voting rights have been restricted by the group to avoid a conflict of interest.

Brendan Mehaffy, who heads the city's  Office of Strategic Planning, said the developer has benchmarks to meet over the next six months. They include financial components, and a market study that will support the developer's confidence in the owner-occupied and rental units, since their success is considered necessary for the overall project to succeed financially.

"Everybody wants to see the Central Terminal be redeveloped and that area redeveloped, and at the same time we also need to make sure we have a plan that can accomplish that," Mehaffy said.