A female University at Buffalo student survived a stab wound in the chest during a robbery just after 5 p.m. Thursday near South Campus and police are trying to determine if the assailant also committed other knife-point robberies in the last month on the campus and in the University District.

All but one of the victims were female students.

All of the incidents involved a man with a knife.

Five of the incidents took place in the last two weeks.

The robberies happened during the day or early evening – none late at night.

And in at least two of the cases, including the stabbing on Thursday, the suspect was a short black man wearing a camouflaged jacket with a green trim. Police are looking at the possibility the same man may be responsible for some or all of the incidents.

“This level of crime is unusual for our university," said Gerald W. Schoenle Jr., UB’s chief of police, in a statement Friday. "We understand the stress that these types of situations generate for members of the campus community and we are certainly available to speak with anyone who has concerns for his or her safety."

UB police announced Friday that they have started a special detail around South Campus and Buffalo authorities said additional city police would be on patrol in the area.

Buffalo police also circulated surveillance photos of two men in connection with the Nov. 21 incident – including one of a man wearing a camouflage jacket.

“Police are following up on a lead," Mayor Byron W. Brown told reporters Friday. "They do have a lead in this attack. Someone who wears a camouflage coat."

The mayor assured that “Buffalo police are taking the incident extremely seriously, have upgraded police patrol and presence. Presence of police and patrols has been increased, and will remain increased as we are following up on leads in the attack.”

Thursday's stabbing took place just after 5 p.m. in the 100 block of Lisbon Avenue in the University District, an area where many UB students live in houses and apartments.

Police reported that the victim, identified as a 20-year-old female student, was found in the backyard of a residence on the 100 block of Lisbon Avenue. She had been stabbed in the chest.

Police said she was robbed and that the suspect is "a short black male" who was wearing a "distinctive" camouflage coat with lime green trim.

Buffalo and UB police said a man in a similar coat robbed another female UB student at about 7 p.m. Nov. 21 at an apartment complex on LaSalle Avenue, near Cordova Avenue, about two blocks from Thursday's stabbing. Police said in this case, the student was unloading items from her car when she was confronted by a man who displayed a knife and demanded property. The man reached into the car and took the woman's purse and iPhone, then fled, possibly toward Camelot Court. No injuries were reported. 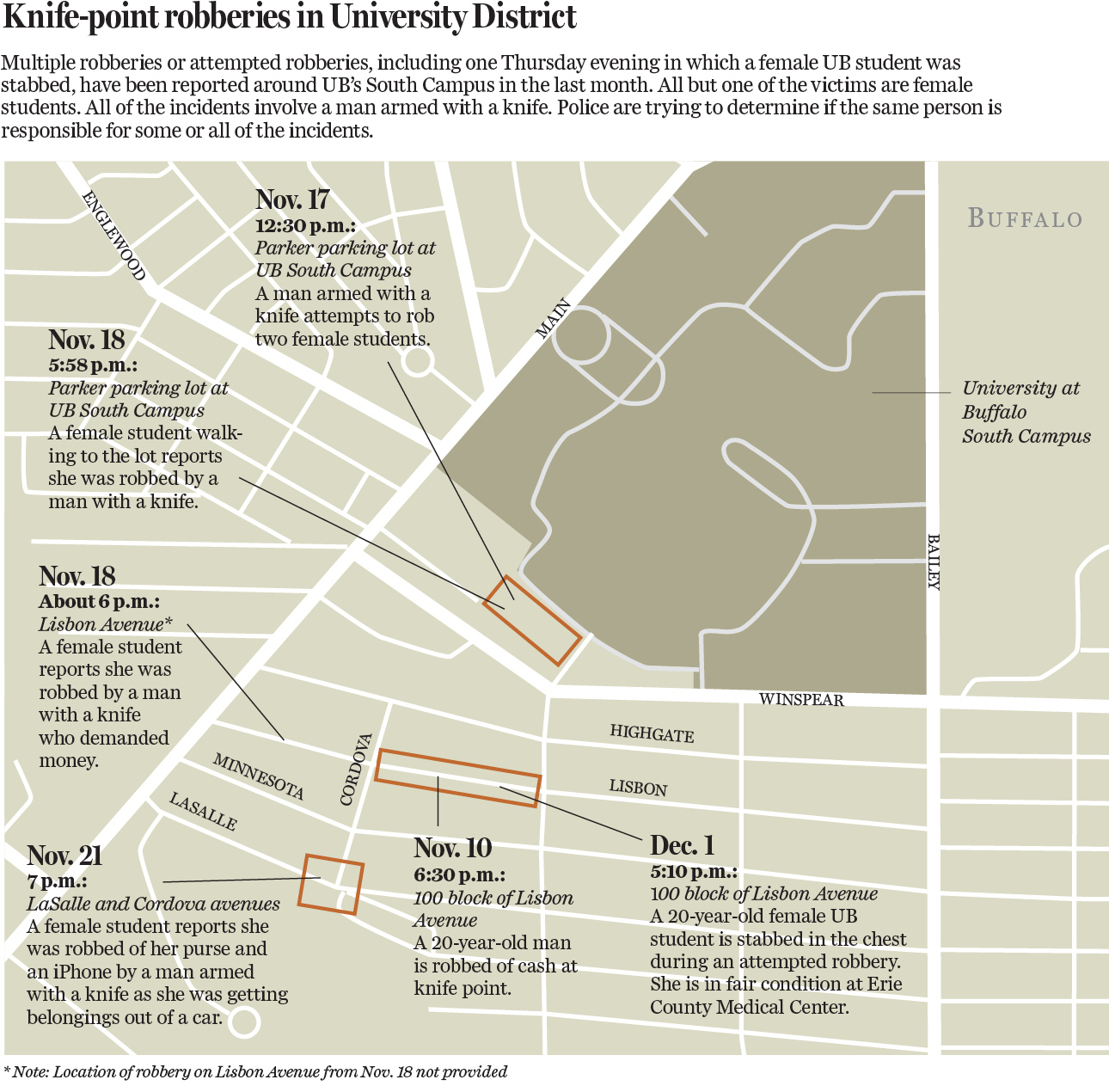 The two incidents followed a series of similar robberies and attempted robberies.

In many of the incidents, the robber was described as a short, black man armed with a knife.

On Friday, UB police sent out a fresh round of alerts to the university community about the incidents and said the department was meeting with members of the South Campus community, including those who study, teach and work at the dental, nursing and architecture and planning schools.

They also urged people to walk in groups and take advantage of university transportation.

“We all have to do our part to keep safe,” Schoenle said. “University Police is patrolling heavily on campus. Anyone travelling on campus should stay vigilant, try to avoid walking alone and, if in doubt, call the UB police.”

Anyone with information about any of the off-campus incidents is asked to call the Buffalo Police Northeast District at (716) 851-4416. For any incident on campus, call the University Police at (716) 645-2222.