NIAGARA FALLS, Ont. — Almost a century ago, a huge crowd – estimated at 30,000 – was on hand to see the 90-minute inauguration of the lighting of Niagara Falls.

In 1925, a Niagara Falls reporter wrote: "The scene was one of almost incredible grandeur. The falls almost seemed to glow into life under the artistry of the directors of the giant searchlights."

The response was nearly the same Thursday when a smaller – but no less enthusiastic – crowd lined Niagara Parkway as the bi-national Niagara Falls Illumination Board stepped into the 21st century with a nearly $3 million upgrade.

But the move from Xenon searchlights to an LED lighting array is unlike any that could have been imagined back in 1925.

As the sun went down, the Falls went dark, as the crowd awaited the big reveal. After a brief ceremony and a drumroll the lights, which have been nearly continuous on the waterfall since 1925, went up in full LED mode – and were welcomed by an almost reverent hush.

"Look at the definition. You can see the individual plumes of water," said Niagara Falls Mayor Paul A. Dyster. "We've hit our target. We were looking for color and movement derived from nature – sunrise, sunset, aurora borealis."

[Gallery: A look back: 300 years of Niagara Falls]

"I'm thrilled," said Mark Thomas, western district director for New York State Office of Parks, Recreation and Historic Preservation. "The richness of the colors is fantastic. Being able to project multiple colors at the same time – this is exactly what we envisioned."

Thomas, who was given the honor of "flipping the switch" for the change, is chairman of the Illumination Board and finishes his two-year term at the end of this month.

"For the last three years the Illumination Board has been working diligently on this," said Thomas, before the event. "We are dealing with 20-year-old lighting and some of it dates back to post-World War II. It was really time to do an upgrade."

In this case, the colors are much more focused and dramatic than they ever have been with illumination that is three to 14 times brighter – depending on the color. Additionally, the maintenance- free lighting will reduce energy consumption by 60 percent and the upgraded lights will have a 25-year life span, compared to the old lighting which had a 1,900-hour life span.

The 21 searchlights have been replaced by 1,400 individual luminaires broken into 350 zones of control across both falls. Each individual zone is equipped with red, green, blue and white LED luminaires. When used together, these lights will mix to create color combinations. 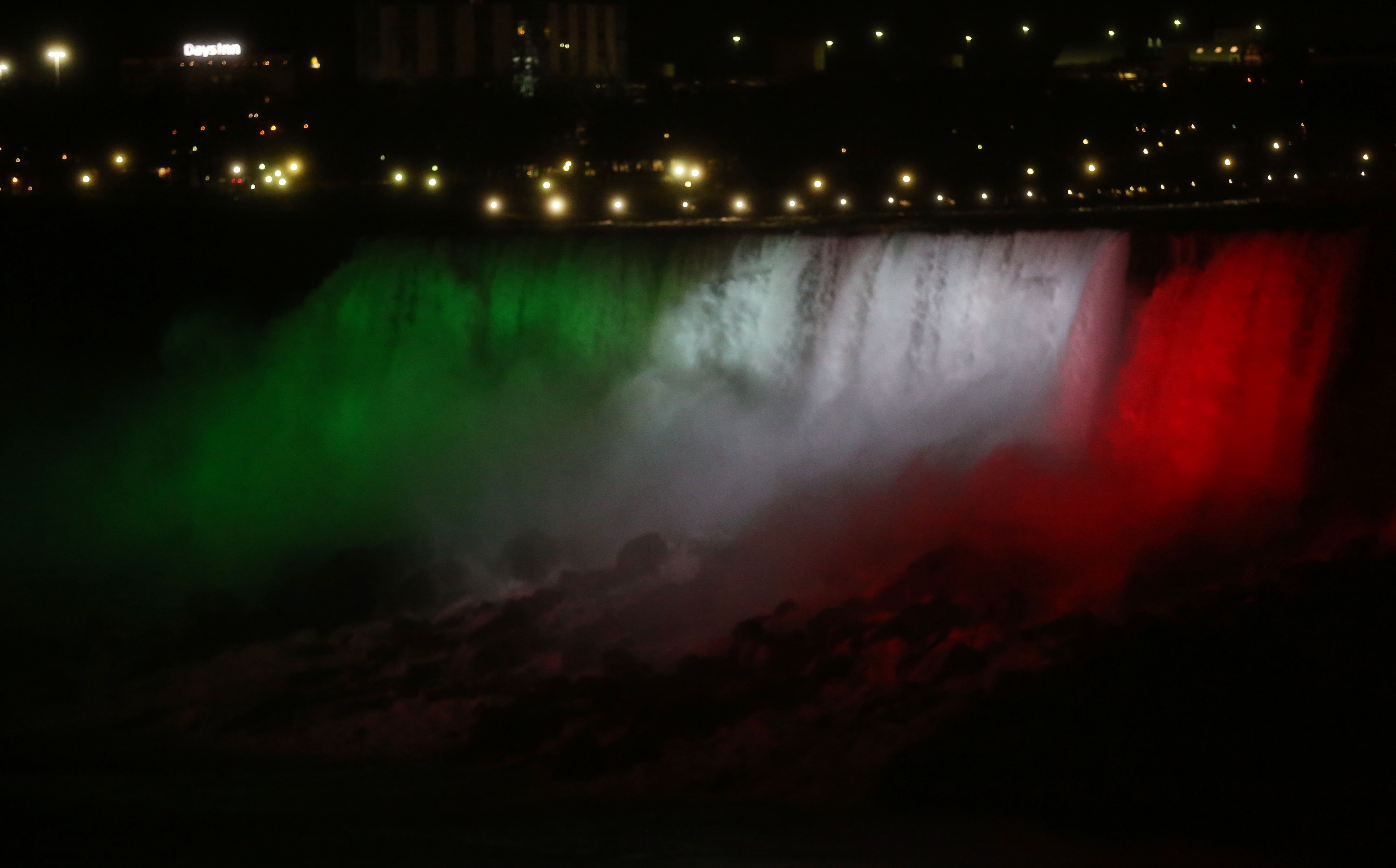 Ed Gesch, president of ECCO Electric, said visitors are going to see evenness across the falls that they have never seen before.

“What you used to see on the falls for illumination was the impression that the waterfall was there, but what you are seeing now is the intensity and clarity. You are actually seeing the water fall. You are getting the impression of depths of the falls – you are left with the impression if you threw a drop of water over the falls you would able to see it go down," said Gesch.

At that time, they installed 24 carbon arc searchlights on the upper level of the Ontario Power's spillway building – what is now known as the Illumination Tower. A major advance in 1974 introduced a Xenon system, which produced a much brighter light.

Thomas agreed saying the old lights could not penetrate the mist and had a limited range of colors.

The new LED system will allow any color of the spectrum, as well as varying shades of those colors, said David Adames, chief operating officer of the Niagara Parks Commission in Ontario.

"LED technology was part of our aim," said Thomas. "Companies had to come in and bring in a demonstration of what they could do. The minimum was double the amount of illumination at the falls – and it's going to exceed that."

Members of the Illumination Board hope the new lighting will also encourage longer tourist stays by offering a spectacular view of the falls that can only be seen at night.

"We believe people will come and stay longer or if they get here later in the day they will be able to enjoy it in the evening," said Thomas.

Lisa Vitello, chair of the Niagara Falls Tourism Board, said the next step will be to make the New York State park more welcoming at night, something she said is not being done at this time.

The cost to update the lighting was shared equally by both countries, with New York State Parks and the Niagara Power Authority paying for most of the costs for the U.S. side.