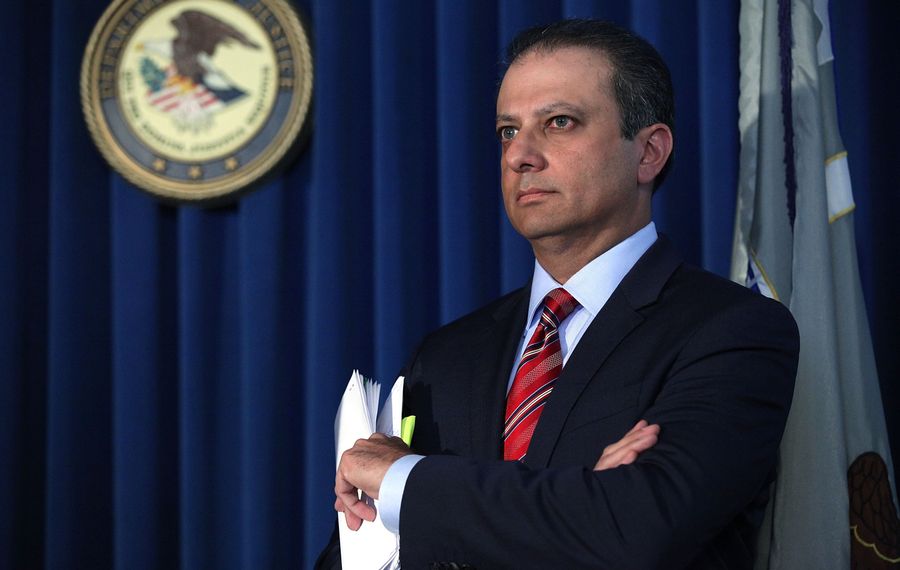 ALBANY – They were five words that shook Albany on Wednesday afternoon.

“I have agreed to stay on,’’ U.S. Attorney Preet Bharara said of his future job plans after meeting with President-elect Donald Trump in Manhattan.

The decision comes as Bharara is in the midst of prosecuting a major Albany corruption scandal and just two days after he appointed a new head of his criminal prosecutions office.

Bharara met with Trump, at the president-elect’s invitation, at Trump Tower in mid-town Manhattan. After, Bharara gave few details, except for a handful of comments that ended more than a year of speculation in Albany about whether the Manhattan-based federal prosecutor would be able to keep his job after President Obama's departure in January.

Bharara called it a “good meeting” with Trump and speculated that the billionaire Manhattan businessman asked him to remain on the job “presumably because he’s a New Yorker and is aware of the great work that our office has done.’’

Like other lead federal prosecutors in 94 federal judicial districts, Bharara serves at the discretion of the president. There are many precedents of new presidents asking federal prosecutors to stay on the job, such as Jimmy Carter did with Gerald Ford’s choice of Robert Fiske Jr. to head the U.S. Attorney’s office for the Southern District of New York – the same office Bharara heads.

The incoming U.S. Senate Minority Leader said Wednesday he was among those whose counsel was sought about keeping Bharara.

U.S. Sen. Charles Schumer of New York, who once employed Bharara as his chief counsel on his Senate staff, said Wednesday the president-elect called last week and asked his thoughts about Bharara staying in his job.

“I told him I thought Preet was great, and I would be all for keeping him on the job and fully support it. I am glad they met and am glad Preet is staying on. He’s been one of the best U.S. Attorneys New York has ever seen,'' said Schumer, who has known Trump for years.

Government watchdogs have openly worried for months that a new president would want their own choice to head the high-profile Southern District office in Manhattan – a post whose office gets major headlines for bringing everything from terrorism to Wall Street fraud cases.

It has been Bharara, though, who turned the Southern District’s office to focus on corruption at the state Capitol – 150 miles up the Hudson River from his Manhattan office.

“Hallelujah,” Blair Horner, of the New York Public Interest Research Group, said when asked to respond to news that Bharara accepted Trump’s offer to stay on the job.

“What Albany has lacked is an independent ethics cop. Until Albany is going to actually create its own independent watchdog, we will have to rely on the U.S. Attorney’s office,’’ he added.

The wild card, Horner said, is whether the new Trump administration’s Department of Justice will encourage Bharara’s office to focus on public corruption cases as much as it has the past four or so years. “We’re not sure if they’ll have different priorities,’’ he said.

But Salvatore Martoche, a former U.S. Attorney of the Western District of New York and former state appellate court judge, said Trump’s meeting Wednesday is significant for both the public’s perception of the incoming administration and for prosecutors in the Justice Department.

Trump, Martoche said, recognizes that Bharara is “in the middle of some very sensitive and important cases and that it would be difficult and probably unwise to do anything to put any obstacles in the way of him concluding those cases before he were to leave office.’’ He cited the major corruption case underway involving a number of people once close to Gov. Andrew Cuomo and several state contracts, including the Buffalo Billion program.

Martoche said he’s confident Trump confidantes like Rudolph Giuliani, the former New York City mayor who ran the U.S. Attorney’s office in Manhattan during the 1980s, counseled the president-elect that “the public needs to be reassured of a continuing faith in the prosecutorial system.’’

As for watchdog groups' worries of Bharara changing the focus of his office’s public corruption probes, Martoche said, “Precisely what Trump is saying is there will not be any movement away.”

“Preet is going to get to finish his work and whether he wins or loses these cases will not be the president-elect’s call, but the juries',’’ Martoche added.

In Manhattan, Bharara told reporters that he was asked to stay on the job both by Trump and in an earlier conversation with U.S. Sen. Jeff Sessions, the Alabama Republican who Trump intends to nominate as his Attorney General. Lead prosecutors in district offices like Bharara report directly to the Attorney General.

Bharara’s investigations have brought down a cast of minor and major players in Albany. They have included former Assembly Speaker Sheldon Silver and former Senate Majority Leader Dean Skelos, who were both convicted on corruption charges.

The decision to stay on the job comes as Bharara’s office is in the midst of a major corruption case against several individuals who have had ties to Cuomo. Last week, eight individuals were indicted in the case, including longtime Cuomo confidante Joseph Percoco and former SUNY Polytechnic Institute President Alain Kaloyeros, who Cuomo tapped to handle major upstate economic development projects. Todd Howe, another Cuomo ally over the years, pleaded guilty earlier and has been cooperating with Bharara’s office in the probe that originally began over the awarding of the Buffalo Billion contract for the SolarCity construction at RiverBend.

Among the others indicted in the case was Louis Ciminelli, head of LPCiminelli, which won the Buffalo Billion contract.

With Trump coming into office in January, there had been much speculation about the future of that corruption case if Bharara was told by the new administration to leave. It is common for new presidents to replace federal prosecutors who head regional offices around the country.

Late Wednesday morning, Bharara took to Twitter himself, noting on his page: “One year ago today, Sheldon Silver got justice, and at long last, so did the people of New York.’’ Bharara’s office successfully prosecuted the former Assembly leader in a corruption case that charged Silver with using his office to personally enrich himself.