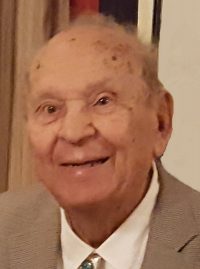 Norman J. Zimmerman of Depew died Friday at Mercy Hospital. He was 100.

Born in Buffalo he attended Seneca Vocational High School. Following High School he went to work at General Motors but the need for electricians at the Curtiss-Wright plant in Cheektowaga was too great and he began working there building planes. His skilled labor was not enough to keep him from combat, and he was drafted into battle.

In 1945, following rehabilitation in England for frostbite, Mr. Zimmerman stayed to help with supplies coming off ships in Belgium because of his experience as an electrician.

When he returned to the U.S. he began work as an electrician at the Pillsbury flour mill on the Buffalo waterfront where he worked for more than 3o years, before retiring in 1978.