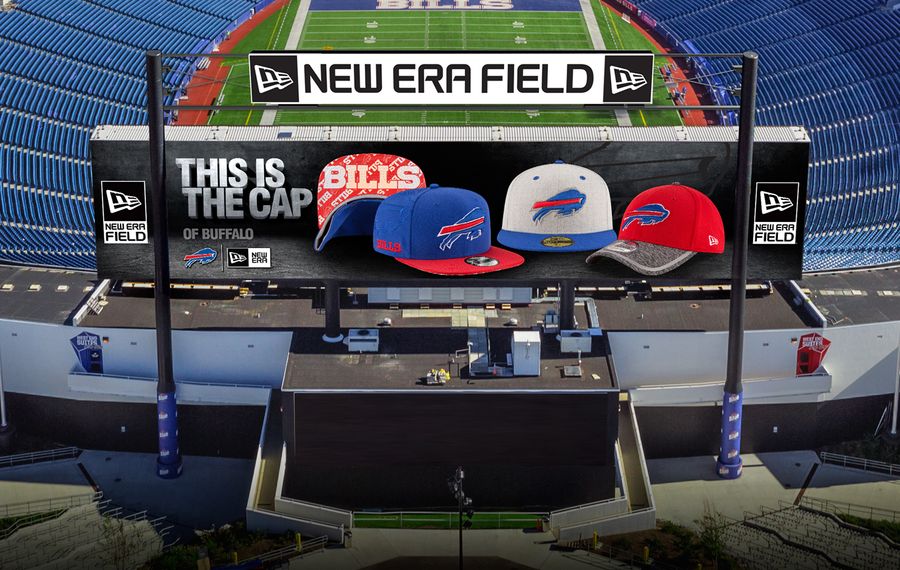 A new season. A new team. A new hope. And a new name for the home of the Buffalo Bills – New Era Field.

Since 1973, when Rich Stadium was built, the Bills have called Orchard Park their home.

Over the years, there have been multiple renovations and changes to the stadium. On Sundays, the celebrations (and groans) can be heard for miles.

And this season, New Era Cap Co. re-energized Buffalo when it released the new name of the stadium to the multitudes of already-excited fans.

This summer, when word got out that the renaming rights to Ralph Wilson Stadium had been acquired by New Era and that the stadium would no longer be known as "The Ralph," fans took to social media as rumors spread. "The Cap" emerged as a popular nickname among fans.

Dana Marciniak, senior director of global brand commuications at New Era, shares the excitement that so many Buffalonians feel.

"I think overall, everything has been really, really positive," she said. "I think people that know our brand know and understand that it does make sense. They understand the history that we’ve had with Buffalo, and the Buffalo Bills, and I think that makes them excited, that it’s a hometown team and not some big brand that maybe isn’t even based here."

Brand awareness has been increasing for the company, which was primarily known for its baseball caps, but recently branched out to other sports.

"Lots of people are really excited when a brand that you don’t expect steps up to the plate and does something like this," Marciniak added.

Chris Koch, CEO of New Era, revisited the subject this past spring with his friend, Bills President Russ Brandon.

Koch and New Era Vice President Paul McAdam were invited to the stadium in June to meet with team owners Terry and Kim Pegula, and a video about both the Buffalo Bills and New Era brought tears to Koch’s eyes.

Out on the 50-yard line, to the company officials’ excitement, New Era Field was born.

There wasn’t much time for touchdown celebrations, as the home opener was fast approaching, a mere six weeks away.

As time ticked off the clock, officials at New Era and Pegula Sports and Entertainment made many decisions, answering the questions that arose. "What’s the logo going to look like? "Are we calling it New Era Stadium or New Era Field?"

"We picked New Era Field because it sounds really intimate and homey," Marciniak said. "Even though there’s 70,000 people in the stadium, it feels more personal."

And one big question remained. "How much signage can we get changed between now and the home opener?"

As it turns out, some but not all will be changed this year with more changes to come next season.

Koch does not take the naming of the stadium lightly.

"I’m very cognizant that New Era has some big shoes to fill with this naming rights deal," he said. "Ralph Wilson is a respected figure in the NFL and in WNY and has been for a very long time."

As he looks to the future, Koch said, "I’m really looking forward to continuing the high standards and the legacy set by Mr. Wilson and sustained by the Bills organization."

Founded by Koch’s great-grandfather, Ehrhardt, in 1920, New Era Cap Co. had its humble beginnings in a small rented property on Genesee Street.

After he was joined by his son Harold in 1932, the two recognized the growing popularity of baseball and brought the baseball cap into the marketplace.

As they say, the rest is history. New Era has gone on to become the dominant name in headgear across virtually every sport in the world.

When asked why New Era chose to put its name on a football stadium, Marciniak said, "I think to educate people about who we are."

Over the years, New Era’s presence has expanded to include multiple sports, such as cricket, rugby and soccer. New Era also has established a presence in diverse venues like the Museum of Modern Art in New York City.

"If there’s a championship cap, we want to be that cap," Marciniak said.

As for New Era Field, there are more exciting changes in store than just the name itself.

Every home game this season will feature an exclusive New Era cap designed by Buffalo celebrities such as Koch and Tyrod Taylor that can only be purchased at the stadium store.

There will also be events such as the "barbershop game," where people can have Bills logos shaved into or spray-painted onto their heads.

"Every game will have some kind of theme like that," Marciniak said. "What we’re trying to bring to the fans is, ‘OK, what is New Era doing this time?’ "

Whether fans call it New Era Field or "The Cap," for Koch, it’s more personal.

"I think my father, David, grandfather, Harold, and great-grandfather, Ehrhardt, would be just as proud and honored as I am," he said.

Bryan Renzoni is a freshman at Clarence High School.