Great Lakes Industrial Development, the property owner of the former Bethlehem Steel building that burned three weeks ago, will pay for some affected residents' cleanup claims and additional analyses of the surface soot and ash that spewed from the blaze, state officials told The Buffalo News.

The state confirmed that follow-up testing would also include an analysis for asbestos.

Nothing that state or company officials publicly said or put in writing Wednesday included the word "pay" as for  how the company would respond to claims expected from affected residents or the additional sampling. But a top state official said the company is on the hook.

"Department of Health has authority to ensure that the company provides an appropriate remedy for the affected neighborhood residents if the company fails to carry out its commitment," said Dr. Howard Zucker, the state health commissioner.

The conflagration - fueled by recycled plastics, boats, antique vehicles and other items in winter storage - started around 7 a.m., Nov. 9 and burned for days. It also forced the evacuation of residents from the nearby Bethlehem Park neighborhood who returned to find their homes covered in toxic soot, ash and debris from the fire.

State officials said they approached Great Lakes about the issue, and the company agreed to provide:

Affected residents, particularly those in the nearby Bethlehem Park neighborhood, can contact the company to report property cleanup claims at 207-8685.

"The commitment we have reached with Great Lakes Industrial Development will greatly assist the residents who have been impacted by the fire and allow them to immediately respond to home cleanup claims and community concerns," Zucker said in a statement.

Great Lakes officials said Wednesday's announcement was motivated by a desire to come forward and help neighbors who found themselves in just as tough a predicament through no fault of their own.

But the company was cautious to point out it was not admitting any liability in the blaze.

"We have felt the gut punch of this devastating accidental fire," Chris Wietig, special projects director at Great Lakes Industrial Development, said in a statement. "We have lost half our facility, most of our tenants and well over 120 jobs have been disrupted - losses we will not likely recover.

"Having said that, we also know that its impact did not stop at our property boundaries," Wietig said. "As we continue our uphill climb regarding work, jobs, debris cleanup and rebuilding at the site and while we have been advised we have no legal responsibility to do so, we look forward to working with the state to help our community and our Lackawanna neighbors in responding to these claims."

That impact included dozens of homes in nearby Bethlehem Park that were covered, or in some cases filled, with soot after the nearby fire.

Some residents wiped soot off of interior walls, kitchen counters, even baby cribs. Others power-washed the exterior or their homes and lawns.

Bethlehem Park residents also reported health impacts from the lingering toxic smoke in their neighborhood after the fire that included respiratory illnesses.

"I think it's a promising start and a significant step forward for a community that's in need of some positive news after a life-altering disaster," said Sen. Timothy Kennedy, whose district includes the neighborhood.

"The fire is out, but community residents living around the Bethlehem Steel plant are struggling with its aftermath in their own homes," said Basil Seggos, the DEC's commissioner. 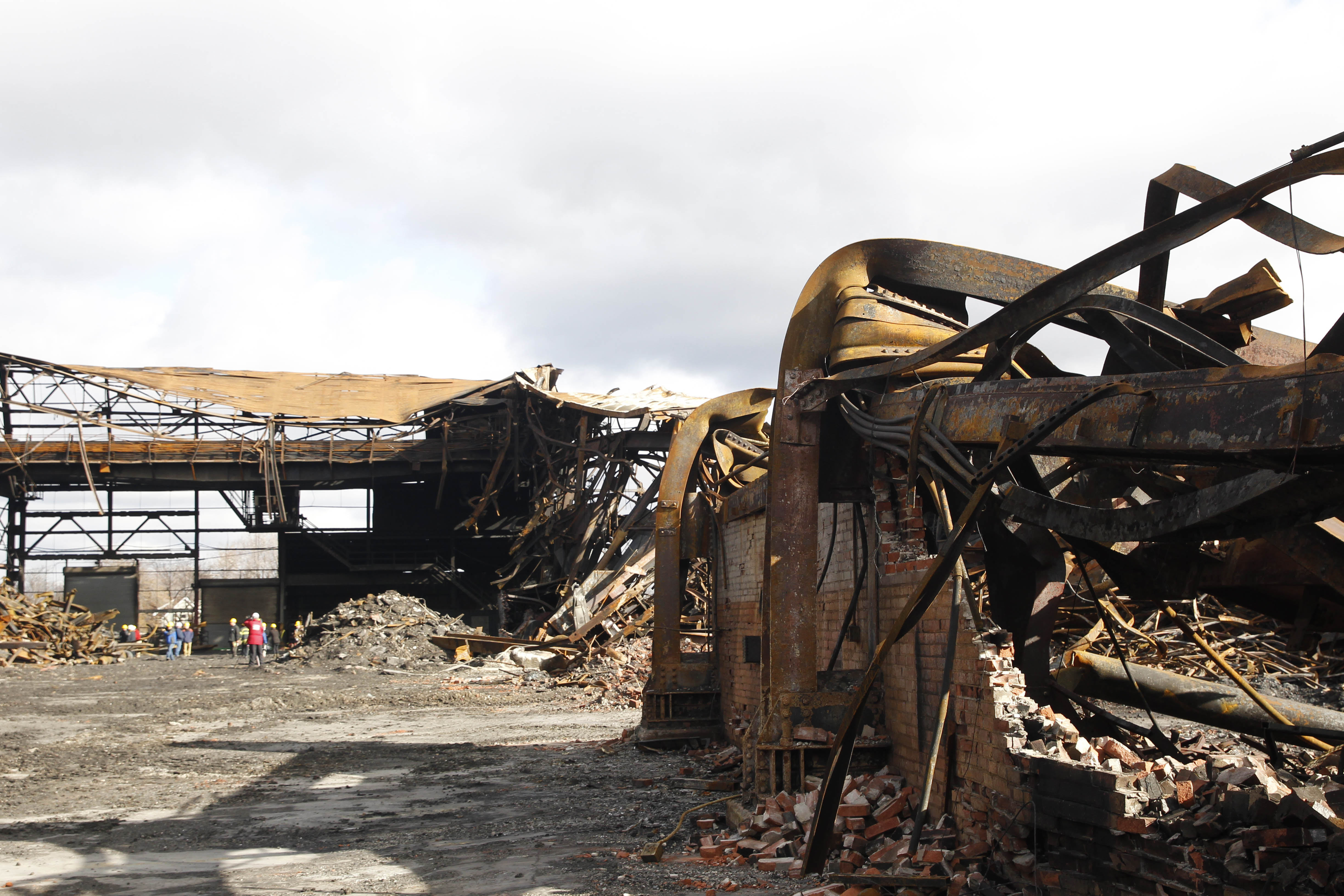 The wreckage of the Bethlehem Steel buildings in Lackawanna that were demolished by fire. (Sharon Cantillon/Buffalo News)

Seggos lauded Great Lakes' efforts "for agreeing to provide peace of mind for its Lackawanna neighbors."

He said his agency, along with state and county health officials, will continue providing updated information about "the nature and extent of the smoke plume."

The state plans to take "representative samples of outdoor surfaces impacted by soot and ash for analysis," according to a statement.

Then, those results will be presented in a to-be-scheduled community question-and-answer session.

The fire consumed about four out of the nine large bays in the complex, or about half of the 1 million square-foot-facility.

Its cause remains under investigation by Lackawanna fire officials.

Besides the hotline, Great Lakes will send residents more information in coming days.

That information will also be available on the company's website at www.steelworksindustrialpark.com.

Company officials advised homeowners to process time-sensitive homeowner's insurance claims and to follow through with them to protect their rights.

Great Lakes moved into the long-vacant Bethlehem Steel building at the corner of Route 5 and Lincoln Avenue in 2010.

"In our eyes, it's been a great success story the company's been proud of," said Phil Pantano, a spokesman for Great Lakes Industrial Development.

What started as an idle remnant of an industrial era gone by in Lackawanna was teeming with a dozen tenants and more than 120 jobs.

It also added millions in tax revenue to the local economy, Pantano said.

"Now, we have to start the long process for figuring out how to move forward.” Pantano said.