A $4.3 million project to convert the former Loew's Theater Warehouse building in downtown Buffalo into 12 apartments is getting more than $161,000 in tax breaks through the Erie County Industrial Development Agency.

The project by developers Amy and Mark Judd will convert the warehouse at 510 Washington St., which has been vacant for 19 years, into one-bedroom and two-bedroom market-rate apartments that will rent for between $1,500 and $2,000 a month.

The building, located in the city's targeted downtown revitalization area, also will include 1,356 square feet of commercial or retail space on the ground level that is expected to be occupied by a commercial bakery operated by Sandra and Paul Wilkins, the owners of Raclettes, a French-styled bistro that opened last spring.

Amy Judd said developing the narrow, landlocked building has been a challenge, not only because of the structure's limitations, but also because of its listing on the National Register of Historic Places, which thwarted some early renovation ideas, such as converting the top floor of the seven-story building into a penthouse.

"It's been a long road, so far," Judd said. "Many of our ideas have been adjusted." 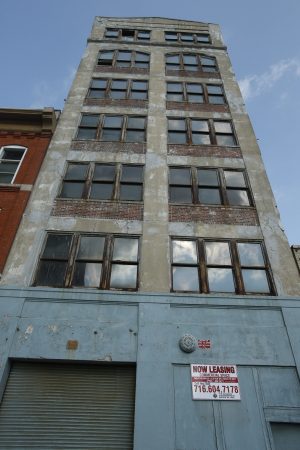 The building also requires extensive infrastructure improvements, including the restoration of water, gas and electric service, as well as the replacement of its elevator and the addition of a second stairway.

"There's a lot of work that isn't pretty, but needs to be done," she said.

The project would restore one of the last vacant buildings remaining in the 500 block of Main Street. It's also one of the tallest on the block. It was originally used to store props, costumes, sets and films, and was later used for document storage by M&T Bank Corp. and Buffalo Place.

Some IDA board members expressed concerns about the need for more affordable housing downtown, noting that many of the housing projects receiving tax breaks from the development agency have been for market-rate units that are out of the financial reach of many city residents.

County Executive Mark Poloncarz noted that the project was expected to generate a nearly 11 percent return on investment for the Judds, even without the IDA tax breaks. Many projects that come before the IDA predict single-digit returns, or even negative returns, without IDA tax breaks.

"I question if it actually needs the IDA's assistance," he said. "It's an interesting project in an older building that is somewhat of an eyesore."

But IDA officials said that return includes the property tax savings that the Judds are expected to receive through a program administered by the City of Buffalo. While the renovation will cost more than $4 million to complete, Judd said the building is expected to have an appraised value of around $3 million once the work is completed.

"The only way this project is going to work is if we approve it as an adaptive reuse project," said Brenda McDuffie, the IDA's chairwoman.

The tax breaks were approved unanimously.