The two young Somali sisters sat at a table in the central registration center signing up for what would become their next big challenge in their journey to America – school.

They came to enroll in the Buffalo Public Schools at an old building on Ash Street, an Ellis Island of sorts for thousands of immigrants and refugees entering an education system that has struggled over the years to keep up with their growing numbers.

Many show up speaking no English. Others may have had little formal education in their home countries. Most encounter vast cultural differences.

The City of Buffalo has taken in thousands of immigrants and refugees in recent years, and it’s reflected in many of its schools. More than 85 different languages are spoken throughout the district, but that number can change by the day.

English language learners now make up 15 percent of the district’s enrollment, and as a whole, they are among the lowest-performing, state figures show. They also are the fastest-growing segment.

All of which constitutes challenges for the new arrivals, as well as for the district expected to teach them.

But last year, Buffalo – forced by necessity and new mandates – began making some long overdue changes at central registration intended to address its large customer base of students from foreign lands.

Chief among them is a new team of multilingual staffers who can speak to the students in their own language – and thus are able to sign them up for school, test their English, detail their prior education, and discuss with parents what to expect in the classroom.

The hope is to better serve this rising population of “New Americans” and better assess them so their teachers know their true academic potential.

“When they see someone that speaks their language, it makes them feel more comfortable,” said Abdi Yakub, one of the new language specialists.

Yakub, a former refugee now raising his own kids in Buffalo schools, spoke in Somali to a father and two little girls dressed in head scarves and matching pink coats.

He asked the older girl her name.

Yakub turned to the sister and asked the same. Her answer was inaudible, but she offered a coy smile revealing a patchwork of missing and baby teeth.

“Right now,” Yakub explained to a reporter, “their father says they have been to school and can write, read and speak English.”

Another staffer escorted the two Somali girls to a different room where he would assess their English by testing their speaking, reading, writing and listening skills.

The test can take anywhere from 45 minutes to three hours and is private, so their father stayed behind in the old gymnasium furnished with a dozen tables and chairs where he continued the process of finding them a school.

He conversed in Somali with Yakub, who stopped occasionally to interpret for a reporter observing.

The father is from Somalia. He fled his country and made the risky journey to South Africa. That’s where he met his eventual wife and where his daughters were born, but where the family did not have permanent residency.

The older girl is 9, attended school in South Africa through the third grade and is a good student, but shy. She had trouble in her old school because kids were taking her work and claiming it as their own.

The younger one is 7, attended school through the first grade and isn’t as strong a student as her sister, but doesn’t appear to have any learning disabilities.

The family was resettled in Buffalo in September.

The girls were anxious about school.

This year was busy. Between July and November alone, Buffalo registered more than 1,100 students classified as English language learners.

In response to their growing numbers across New York, the State Education Department made revisions in its regulations last year forcing districts to improve services for the many multilingual students struggling to make it in the public school system.

That led to changes at central registration, where Buffalo hired a supervisor for multilingual placement and six cultural specialists who speak the top six foreign languages in the district. 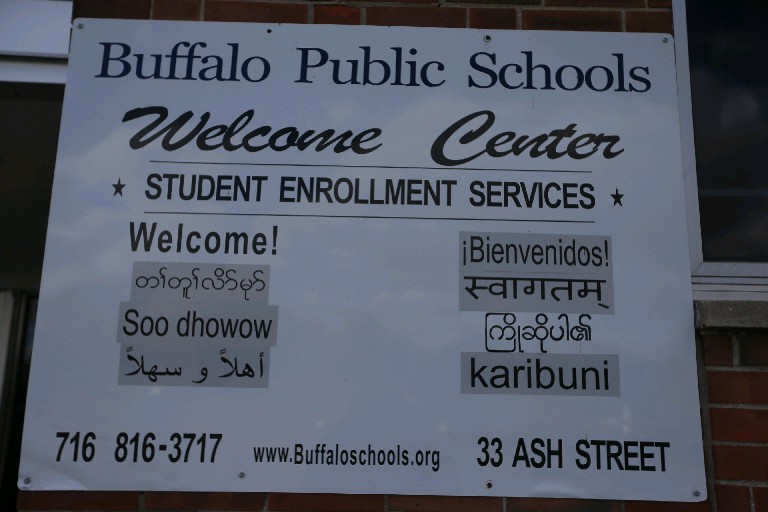 Buffalo schools have hired language specialists to help immigrant and refugees students navigate a system that can be foreign to them. (John Hickey/Buffalo News)

“In the past, we would have done our very best to communicate with the family, either through another family member or sometimes the student,” said Mark Frazier, director of student placement and registration. “We did our best given the circumstances that were given, but definitely recognized the growing need to provide face to face translation services.”

The changes coincided with the arrival of Superintendent Kriner Cash, credited for realigning the district’s multilingual department and recognizing central registration as an important port of entry for foreign students new to the district.

Their numbers have been largely concentrated in roughly a dozen city schools, which has overwhelmed some and contributed to low test scores on which schools are judged.

Buffalo is trying to do a better job of providing teachers with more information about the background and education of these students so they know how best to teach them, said Finune O. Shaibi, supervisor of multilingual student placement.

“They may not know English,” Shaibi said, “but they could be a superstar in their own language.”

That’s why students are now tested in English – as they were in the past – as well as in their native language.

“That’s the difference,” Shaibi said, “before it was about surface-level language proficiency, but we need to properly assess and identify both the academic and linguistic needs of the students.”

Checklist for a new country

Back at the intake session, Yakub briefed the father.

He discussed the importance of school supplies, particularly the backpacks, which should be checked daily for notes from the teacher.

He explained bus pickup and drop off, school lunches, report cards, the importance of attendance and writing an excuse note if the girls are absent. The girls will have school safety drills on occasion, he said, but they should not be concerned. 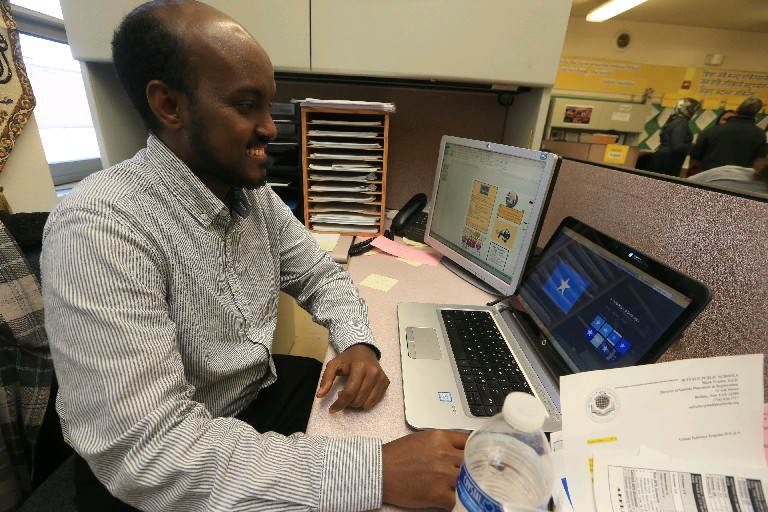 The father sat there quietly, and occasionally nodded, before he questioned Yakub.

Can the girls wear their head scarves with their school uniforms? Of course, Yakub told him.

How do they know what bus to ride? Each has a number, Yakub said.

Has the school lunch meat been prepared according to Islamic halal rules? He didn't know, Yakub told him, but the girls don’t have to eat it if they’re not comfortable.

Yakub went on to explain how the family could choose which school the girls attend, as long as there are seats available.

The father asked about West Hertel Academy, on Hertel Avenue and Military Road, which has a high number of English language learners. The school is close enough to the family’s home for the father to walk the girls back and forth.

Yakub said he would inquire.

“His first priority is they go to the same school,” Yakub explained to a reporter. “The seating can be challenging at times, but we will put our best foot forward.”

Placement can be particularly challenging with older English language learners, who want to attend school, but may not have the time to earn their high school diplomas before aging out at 21. In those cases, they can be referred to other options, such as the district’s adult education or alternative pathways programs.

By this time, the staffer who conducted the testing returned with the girls.

The older girl is at the intermediate level of English, he explained, the younger one a beginner. Both will need two periods of English a day and be assigned a teacher who teaches English as a new language.

The girls will be placed into age-appropriate grade levels – second and fourth – but West Hertel had no available seats in the second grade.

There were, however, spots open at Buffalo Elementary School of Technology on South Division Street. The girls would have to take a bus, the father was told. He agreed.

The father was given receipts to show the school, along with strict instructions to bring a caseworker from their resettlement agency who can help him when dropping the girls off for their first day.

The family walked out.