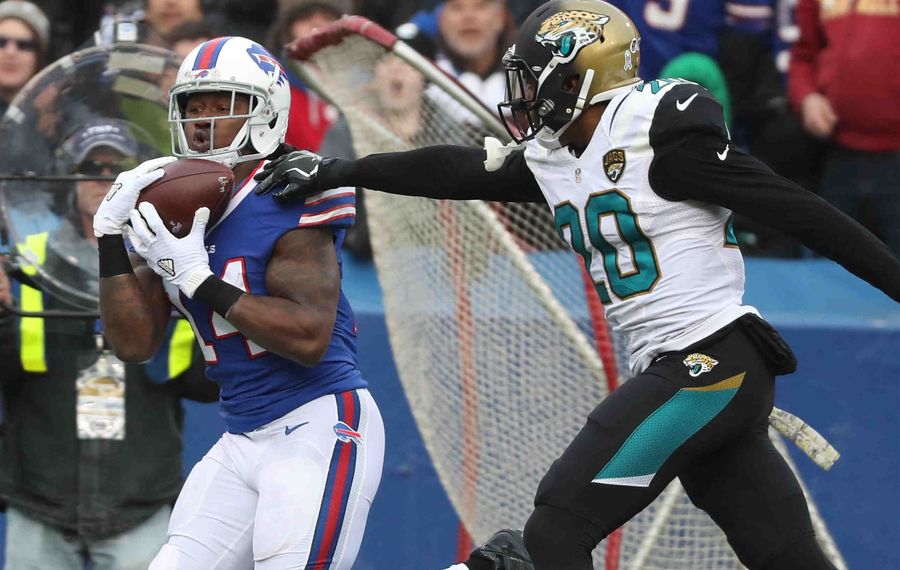 Sammy Watkins didn't have any grand expectations for Sunday's game against the Jaguars. After all, he had missed eight games due to complications from a broken foot. His conditioning wasn't up to par. He didn't quite know what to expect.

"I didn't really care about catching the ball," Watkins said after the Bills' 28-21 win at New Era Field. "I just wanted to feel good. Go out there, block a couple of plays, just get the feel of the game."

But the Bills didn't spend two first-round draft picks so Watkins could feel good about his blocking. They got him to be a playmaker, a difference-maker, the sort of wide receiver who strikes fear in opposing defenses and makes his teammates better.

That's why they put Watkins back on the field as soon as he was eligible to come off injured reserve. They were 5-5, desperate to beat a bad but defensively robust Jags team to keep their playoff hopes alive. With Robert Woods sidelined by a knee injury and Percy Harvin out with migraines, they needed their best wide receiver to make an impact.

Watkins didn't let them down. He eased back into the flow, playing on a shade under 50 percent of the offensive snaps. But he made a big difference. He reminded Bills fans how much the team had missed him and no doubt stirred renewed regrets about what might have been this season if he had been healthy all along.

In the first half, he struggled to find his comfort zone and adjust to the speed of the NFL game. His first catch, a 12-yard out, came midway through the second quarter. It was Tyrod Taylor's longest completion of a dismal first half, in which he completed seven of 12 passes for just 48 yards.

At halftime, Watkins approached Taylor and told him it was time to test Jalen Ramsey, the Jags' fine rookie cornerback, deep one-on-one. The Jags were stacking the line to stuff LeSean McCoy and the running game. They were daring the Bills to throw the ball down the field. What the heck were they waiting for?

"We were getting a feel for how do we play now," Taylor said. "We came to the conclusion that we thought we could get a deep shot on him."

Watkins said he was playing too fast in the first half. In the second, he made a conscious effort to slow himself down when he released from the line of scrimmage.

Late in the third quarter, on first down with the Bills trailing, 14-13, he and Taylor decided it was time to take their shot. Watkins got behind Ramsey deep down the right sideline and Taylor delivered the ball in stride for a 62-yard gain. Three plays later, Taylor scrambled around left end for a 7-yard touchdown to put the Bills back in the lead.

Early in the fourth, after the Jags had regained the lead, 21-20, Taylor went back to Watkins down the right side on third-and-5. Watkins drew an interference call on Prince Amukamara, putting the Bills in business at the Jags' 25. Four plays later, Taylor threw 16 yards to Justin Hunter for the game-winner.

So maybe Watkins wasn't at full strength. Maybe he was mainly interested in getting a feel for the game. But most NFL games are decided on a few big plays, and on those two plays, both leading to TDs, his impact was unmistakable.

Rex Ryan laughed when he was asked how Watkins' mere presence can affect a game.

"Yeah, we've been saying it for a long time," Ryan said. "I know it was a limited role, but he's such a difference-maker. We hope he can play a little more and more, because we certainly need him and we're a different team with him."

They're a winning team, at least for the moment. The Bills are 6-5. Their streaky season line: Two losses, then four wins, three losses, then two wins. They kept their heads above water in the AFC race. They're a game out of the second-wild card spot in the loss column, assuming Denver and Kansas City didn't play to a tie. But they still probably need to run the table to get in.

The question is whether they're anything more than an average team. Beating the Jags doesn't prove much. Next week's game in Oakland will be a better gauge of how good they really are, and whether Taylor is an impostor as a franchise quarterback.

Watkins' return and the resurgence of Marcell Dareus come a good time. It creates  renewed sense of possibility within the team, a feeling that they can compete with anyone if they're healthy. One thing about Ryan's teams is they don't lose belief. They think they're capable of running the table, or winning four of five.

Taylor was dreadful for a half but made enough big plays with his arm and his legs to put a second fourth-quarter comeback on his resume. It was a fairly typical and inconclusive performance by Taylor, who had 166 yards passing for the second game in a row. He had 38 yards rushing. A week earlier, he ran for 39 yards. I detect a pattern.

The difference Sunday was that he made plays down the field to Watkins. It feeds the notion that his critics -- including management -- should judge him when he has a healthy Watkins on the field.

"Absolutely," Taylor said. "Missing Sammy early in the season definitely hurt our offense. Of course, we have other playmakers. But Sammy's presence and what he's been able to do in this league is incredible. It's great to have him back out there making plays. We've got to continue building this chemistry moving forward."

The Bills are now 2-11 in games with Taylor when they trailed by four points at any time in the game. But it's not as if he brought them back by throwing the ball all over the lot. He was supposed to beat Blake Bortles and lead the Bills over a bad team, and he got that done, with big assists from LeSean McCoy and Watkins.

The question remains, how much of Taylor's shortcomings can be attributed to a thin supporting cast and how much is due to his own limitations as an NFL passer? Will seeing him rise up with Watkins on the field convince management that Taylor is worth paying $27 million next season?

Taylor said it's all about wins and losses. But it's not so simple. A skeptic could suggest that having a franchise receiver like Watkins sets the standard even higher for Taylor. Having invested so much in Sammy, how can Bills management settle for a quarterback who's marginal as a passer?

If they commit long-term to Taylor, they might risk wasting more of Watkins' career, assuming he can stay healthy. That's a big assumption, considering that Watkins has had eight different injuries in his first three years in the NFL.

At any rate, it would be hasty to make any judgments based on one game against one of the worst teams in the league. Beating Jacksonville is a very low bar at this point. Taylor has five games left to make his case. With Watkins again healthy, there will be no excuse for him to play to such a low passing standard.