The ill-fated ship had left the Bethlehem Steel Corp. in Lackawanna, heading toward Minnesota to pick up some iron ore when it ran into a horrific storm packing winds exceeding 65 mph and creating 30-foot waves on frigid Lake Huron.

That combination proved deadly for the brittle steel hull of the SS Daniel J. Morrell, a Great Lakes freighter that split in two and sank, killing 28 of its 29 crewmen.

As often happens with national tragedies, the disaster had a strong Western New York connection.

The 28 victims included eight local men – seven from Buffalo, Hamburg, Kenmore, Williamsville and Niagara Falls, plus a South Buffalo native who had moved to Wisconsin.

And the ship had left Lackawanna on a planned route heading from Lake Erie to Lake Huron and, ultimately, to Lake Superior to pick up iron ore in Taconite Harbor, Minn.

Oddly enough, the Morrell had the same number of people on board, 29, as the much more heralded SS Edmund Fitzgerald, which sank in another November storm, on Lake Superior, nine years later. The Fitzgerald has remained a popular subject, thanks in part to the 1976 Gordon Lightfoot song about the tragedy.

The Morrell has no such cult following.

But the real story of the Lake Huron shipwreck was the plight of its lone survivor, watchman Dennis N. Hale, of Ashtabula, Ohio.

Hale, who died last fall at the age of 75, was the only person with a firsthand account of the Morrell shipwreck. He told that story to newspaper reporters, in speeches around the Great Lakes area and in his autobiography, "Shipwrecked: Reflections of the Sole Survivor."

And what a story it was.

Life on the raft

Disaster struck at about 2 a.m. the next morning. Hale was awakened by a loud thump, before the books on his bookshelf tumbled to the floor and the ship’s general alarm went off.

Clad only in his undershorts, he jumped out of bed, grabbed his life jacket and headed to the deck.

That’s when another Buffalo connection entered the story, one that may have helped save Hale’s life, according to Ric Mixter, a documentary producer and good friend of Hale’s.

"Dennis, you’ve got to get something warmer on. We’re sinking," crewmate Norman M. Bragg, of Niagara Falls, told Hale, who grabbed a peacoat that he put over the life jacket.

The ship had broken in two, and Hale somehow managed to jump into a raft, along with three crewmen. The four of them watched sadly as the ship’s bow sank and the stern drifted away into the darkness.

The four shipmates huddled together against the brutal elements, for the start of what would be a 38-hour ordeal for Hale.

At about daybreak, he discovered that two of the other men had died. Then that afternoon, the wheelsman, with his arm on Hale’s leg, told him, "It feels like my lungs are filling up," according to Hale’s wife, Barbara. Hale asked the man whether he could cough. The man started coughing – and soon died. 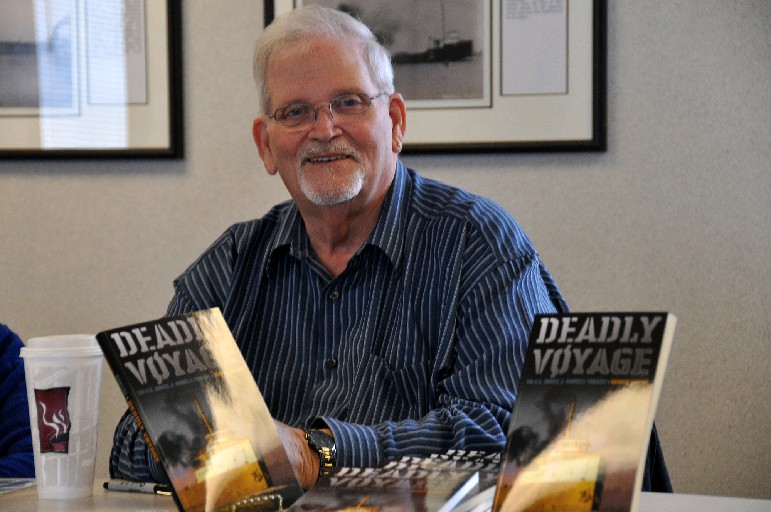 Sole survivor Dennis Hale with the book "Deadly Voyage," which told the story of the 1966 shipwreck that killed 28. Hale died last year.

Clad only in his undershorts, life jacket and the peacoat, and still jammed into the raft with his three dead shipmates, Hale clung to life in the approximately 40-degree water, with air temperatures dipping toward the freezing mark. During his hundreds of speaking engagements over the last 25 years, Hale often recounted the vision he had as he drifted in and out of consciousness aboard the raft.

Desperately hungry and thirsty, Hale wanted to eat the ice off his peacoat. But an elderly man with a white beard implored him not to eat it.

"He said the best analogy he could make was that he had a vision of God telling him not to eat the ice," said Donald J. Morin, vice president of the Saginaw River Marine Historical Society.

Experts have said the ice would have lowered his body temperature further, providing him with less chance of survival.

Finally, the next day, the raft drifted into shallow water close to shore, near Harbor Beach, Mich. At about 4 p.m. Nov. 30, a helicopter appeared overhead.

"He basically was immobile," said Mixter, the friend and president of the Great Lakes Lighthouse Keepers Association. "All he could do was lift his arm to wave at the helicopter. That’s the only way they knew he was alive."

It took the whole helicopter crew to lift the frostbitten Hale out of the raft.

"Because God wants you to be alive," the priest replied, according to the UPI story that appeared in the Dec. 1 edition of the Buffalo Evening News. 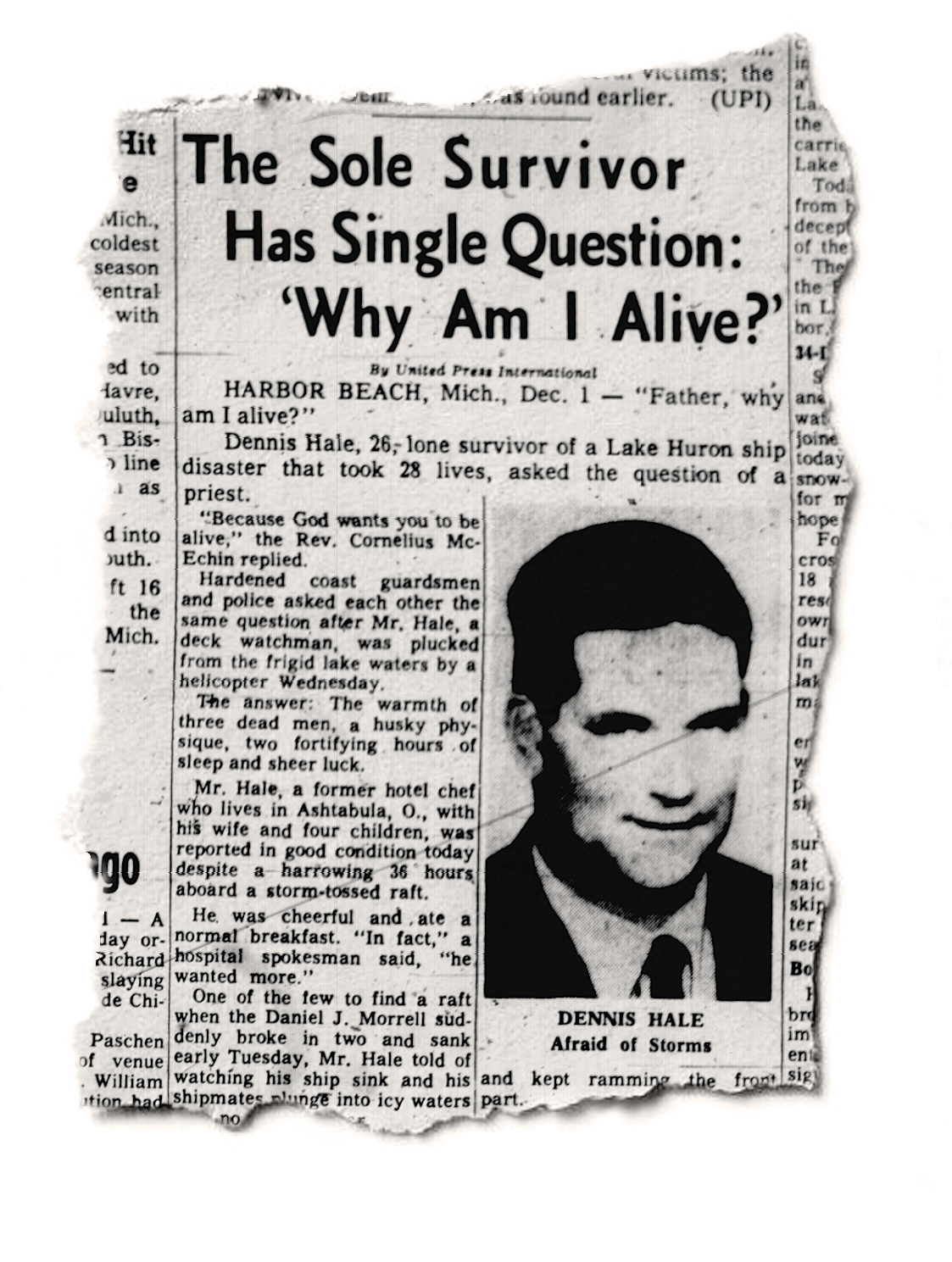 Plenty of theories have surfaced about his survival.

Hale was a heavier guy who withstood a huge weight loss over two days. Wearing only undershorts on his lower body, he wasn’t bogged down by heavy, frozen pants. He didn’t eat the ice off his coat. His life jacket being under the peacoat helped insulate his heart and lungs. He prayed. And he even practiced "remote viewing," picturing himself on a warm, sun-splashed beach.

"Not taking anything away from the guys who didn’t survive, but Dennis was just a true survivor, and that helped," he said. "There was no question he had a will and a survivor’s mentality from birth."

Hale’s mother died during his childbirth. He bounced among various relatives, even hitchhiking several times between Ashtabula and California while in his early teens, according to Barbara Hale.

Those circumstances apparently made him a strong-willed young man.

As a child living with an aunt in Ohio, he used to open his bedroom window in the dead of winter, while covered only by a sheet.

"He told himself he had to stay warm, because he may need to do that some day," his wife said.

After getting into some trouble in California, serving in the U.S. Army, working as a chef, painting bridges and doing odd jobs, Dennis Hale became a deckhand in 1964, riding the Great Lakes freighters and making a strong connection with his crewmates.

"When he became a sailor, he learned the value of family," said Carl W. Jahn, a good friend and lighthouse enthusiast in Michigan. "So the crew on the ship was the first real family he knew. The camaraderie with his crew became his life."

That’s why the first few years after his rescue proved so tough for Hale.

Two developments kept Hale from initially sharing his story with the public.

First, early news reports suggested that Hale survived partly by covering himself with the bodies of his three raft-mates.

"It crushed Dennis to ever think that he used somebody else to shield him from the storm," Mixter said.

And after leaving the hospital and returning to Ashtabula, Hale went to visit the wife of one of his late crewmates.

"She was yelling at him, asking him why he survived and her husband didn’t," Barbara Hale said. "So survivors’ guilt kicked in. That’s one of the reasons why he didn’t talk about it anymore."

His public silence lasted until about 1990, when he agreed to attend a documentary screening about the Morrell. He said a few words about it and felt better.

That gradually led Hale to devote the last 25 years of his life to sharing his story. He even agreed to be hypnotized, to unearth more memories of his 38-hour ordeal. Those who heard Hale’s presentation, including his wife, Mixter, Jahn and Morin, marveled at how he inspired regular people dealing with hardships, convincing them never to give up.

"That was his family."

The Morrell sinking has been blamed partly on its captain’s arrogance in believing his ship could get through the horrendous weather, when a sister ship turned back.

Investigators also later learned that the metal used in such pre-1948 ships – the Morrell was built in 1906 – was way too brittle to stand up to such harsh weather conditions.

"It’s another one of those stories that shows Mother Nature’s strength, that no matter what we build can be broken," he said.

"He didn’t think of himself as a hero," Barbara Hale said. "He said he was put into a situation, and he happened to survive it."

Besides making public appearances, writing his book, contributing to another one on the Morrell and appearing in documentaries, Hale also started his own website, greatlakessurvivordennishale.com, before he died from cancer on Sept. 2, 2015.

Several remembrances of the 50th anniversary are being held this week, including a memorial service Tuesday in Ashtabula, when a bell will be rung for each of the 28 victims, his wife said.

"And now that Dennis has passed, they’ll ring the bell for him too."