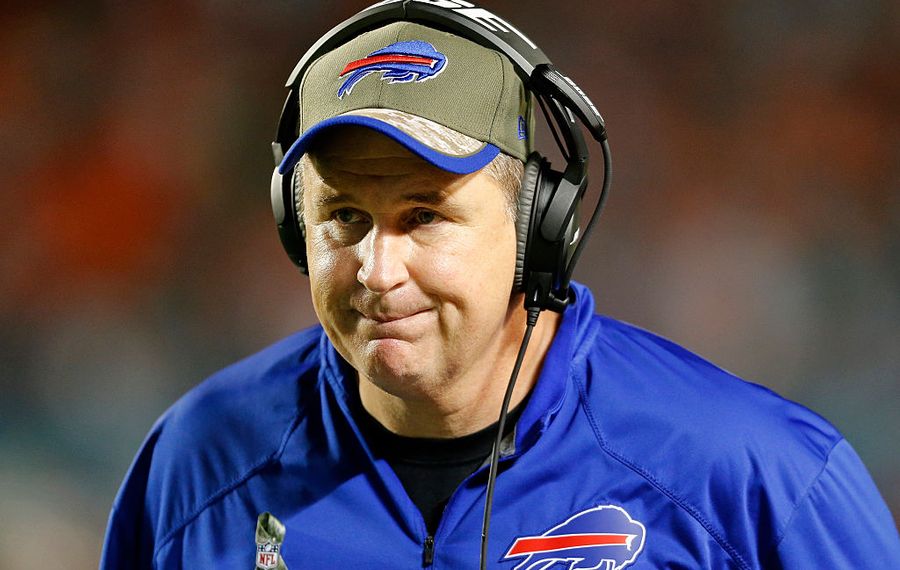 Former Bills head coach Doug Marrone returns to Western New York with his 2-8 Jacksonville Jaguars on Sunday for the first time since taking a $4 million opt-out in his contract and quitting on the team. We are remembering his tenure in Marrone Week.

If there's one thing that can be said for Doug Marrone, the man was a prolific punter.

In Saint Doug's two years with the Bills, they punted from the opponent's side of the field a whopping 39 times – second in the league over span behind only Andy Reid's Kansas City Chiefs.

Marrone's sheepish punting decisions drove people insane. He did it all the time, no matter how important the situation, and his explanations never really made sense.

So in honor of Marrone's return to Buffalo, here's every single time he punted from beyond the 50-yard line, via Pro Football Reference. Try not to get worked up all over again.

The November 2014 Miami game sticks out in memory. Both teams were 5-5 and needed a win to keep their wild-card hopes alive. The Bills worked up a very Billsy 9-3 lead in the third quarter before two Ryan Tannehill touchdowns and a safety on a Kyle Orton intentional grounding penalty in the end zone put Miami up, 19-9. The Bills got the ball into Miami territory with 9:55 left in a game Marrone had called a "must-win" and he punted on fourth and 6.

The Bills got the ball back twice after that and went three-and-out and four-and-out before losing, 22-9, and all but cementing their 15th straight season without making the playoffs.

I said Marrone should act like he's coaching for his job. That punt showed that he's just not aware how grave the situation really is.

After defending punt down 10 in Miami territory in 4th quarter, I've concluded Doug Marrone is a less likable Dick Jauron.

Marrone defended his decision to punt down 10 points with 9 minutes left. Said #bills would have had enough possessions to rally. Fail

What a gutless, pathetic punt by Doug Marrone. #Bills

Down 10 with 9 to go and you punt for 30 yards. Marrone makes me physically ill.

Of course, a punt. Playoff hopes on the line. Gutless. #Marrone #Bills

This punt is Doug Marrone's career in a nutshell

"30 yard net punt" will be on Marrone's gravestone.

And also a great subtweet from former Bill Fred Smerlas:

One other punt that sticks out: Nov. 17, 2013 against the Jets. The Bills are out of the playoff picture but find themselves with a 27-7 lead when Jairus Byrd intercepts a Geno Smith pass at the Jets' 34-yard line. The Bills take over virtually already in field-goal range. C.J. Spiller gains two yards and then EJ Manuel misses Marquise Goodwin twice. And Doug Marrone punts from the 32-yard line!

In the three years since this play, there has only been one instance of a punter punting from closer to the end zone than this (Andy Reid's Chiefs did it, of course). Poor Brian Moorman had to go out and hit a little 19-yard punt. At least Geno Smith had the decency to throw a pick-6 to Da'Norris Searcy on the ensuing possession to give Buffalo some points back.

There are plenty of other terrible punts on that list that you can examine if you have the patience. That's all for me. Here's a meme.

doug marrone: ok. 1st and goal. let's get it to sammy watkins.

-- The full story of Doug Marrone interrogating a reporter at an airport over tweets
-- Remembering 'Saint Doug'
-- The legend of the #Douggernaut
-- Rex Ryan says he wouldn't leave a job like Marrone did; hopes he & Jags have a "miserable experience" in Buffalo
-- Gleason: Two years after Marrone's exit, questions remain