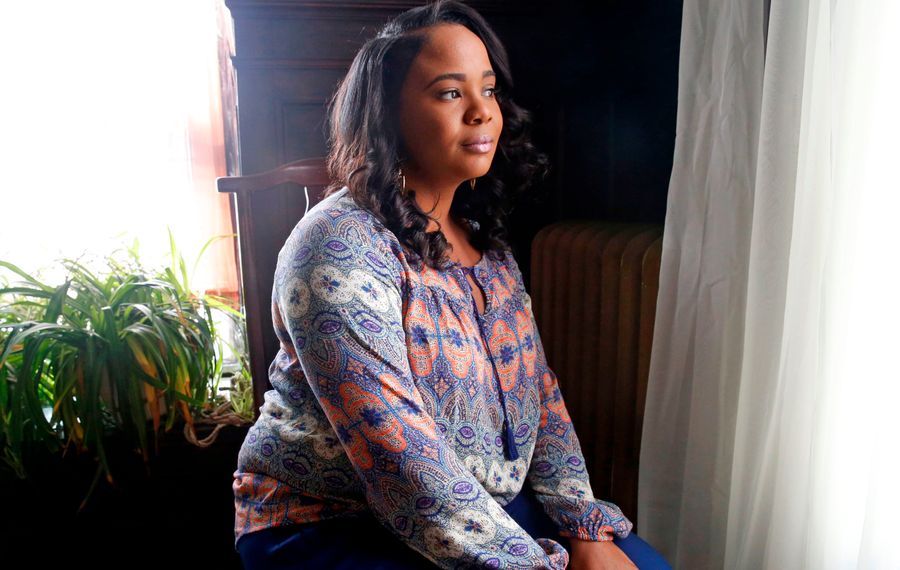 The United Nations estimates that 2.4 million men, women and children globally are victims of human trafficking at any one time.

Buffalo native Kelly Galloway nearly became one of them.

The 31-year-old missionary grew up worshipping with her family at St. John Baptist Church on Goodell Street. Now she works overseas with orphans who live in garbage dumps and toxic landfills, teaches English in rural outposts so remote the villagers have never heard of America, and opened medical camps in Nepal after its 2015 earthquake.

It was near a Nepal coffee shop last February that Galloway was approached by two men while on her way back to the hostel where she was staying.

"One was tall. One was shorter. One of them was really, really nice," Galloway recalled. "One guy was like, ‘Come with us. Let us show you a Nepali good time. We can take you to a club.’"

She declined the offer, but the men continued their pursuit.

Afterward, one of her rescuers told her "those are men that sell girls. If you would’ve went with them, you would not have seen your family again," Galloway said.

She recounted her story at a human trafficking forum this month at the Frank E. Merriweather Jr. Library, and will tell it again at a Dec. 2 fundraiser at The Foundry for RAMP Global Missions, the Lynchburg, Va., Christian humanitarian organization she founded and oversees as president. The organization operates programs in Lynchburg as well as Nepal, Brazil, Guatemala and India.

Galloway lives on $200 a month, has eight employees and spends about three months in each of the foreign countries.

At the December event, she will talk about the safe house she opened in Guatemala and the additional ones she wants to start in Buffalo and Lynchburg for victims of trafficking. Her own near-abduction made her even more passionate about helping others not as fortunate as she was to have escaped.

"I honestly believe God allowed that to happen so I could be more sympathetic and empathetic to victims. I could have been one of the people I saw in the safe houses," she said.

Opening the Guatemala safe house is just one of RAMP’s initiatives since its founding three years ago.

In Nepal, a 7.8 magnitude earthquake killed almost 9,000 people in April 2015, leaving homes and buildings in ruins and families devastated. Galloway realized residents were still living in fear, with many even refusing to enter big buildings.

There was not much Galloway’s team could do to ease the fears, but through a village transformation project they were able to help rebuild homes. RAMP – Reaching As Many People – constructed basic, one-story dwellings made of tin with dirt floors to replace the cloth tents that many survivors were relegated to living in. 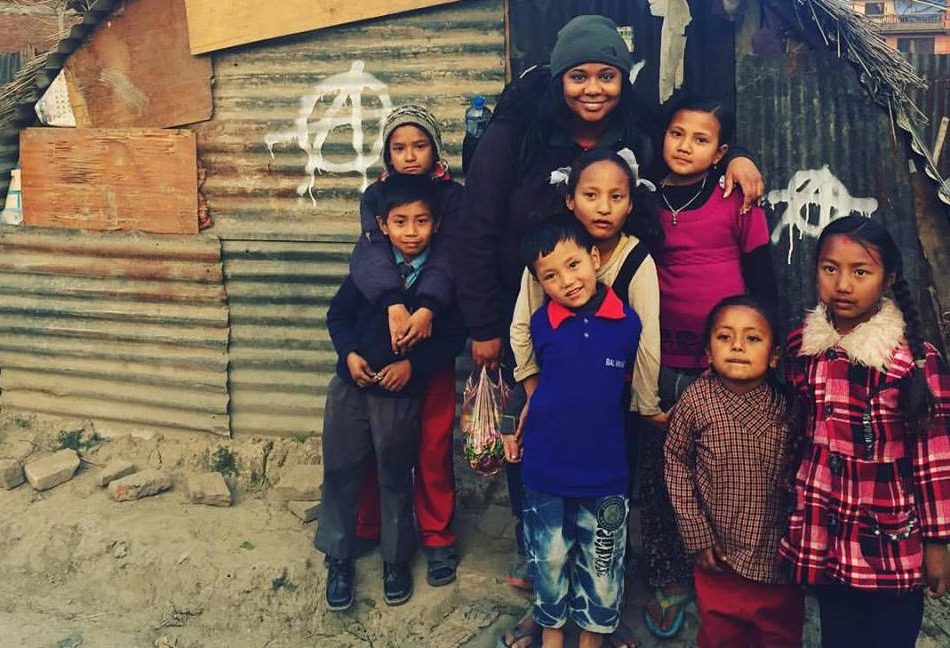 Buffalo native Kelly Golloway and Napalese children in front of one of the tin homes RAMP constructed after the 2015 earthquake. Tree branches on top provide insulation from the sun. (Photo provided by RAMP)

"It cost about $1,000 American dollars to put up these little tin houses. It was better than living in cloth tents," she said.

The villagers tied together tree branches and placed them over the metal to protect against heat from the sun.

"That was their way of insulating their property," she said.

Some 1,000 miles away, Galloway and her group helped build homes for people living in remote villages in South India. Many have never left their tiny communities, Galloway said. And because of the many different languages spoken in India – at least 122, according to Wikipedia – generations of families and community members can’t communicate with others unless they know Hindi or English. And in most cases, people don’t have the money to go to school to learn Hindi or English.

"They never even heard of America. They didn’t even know where I was from. They live in these villages where you have to travel far, far out just to get to them. They have no knowledge of the outside world," Galloway said. "These people stay in their villages. They don’t migrate."

In those villages, RAMP started a seed program in which families were provided enough food for a month along with seeds and gardening supplies so they can plant their own gardens.

"The goal is to make them self-sufficient," she said.

Galloway wasn’t always so committed, even though the spirit of helping runs in the family. She is the daughter of Lynette and Warren K. Galloway, who was the local president of Jesse Jackson’s Operation PUSH.

But as a young girl growing up in Buffalo, Galloway didn’t care much about school or a career or anything else.

It wasn’t that she wasn’t smart. She scored really high on her SAT - almost 1500 - which drew letters of interest from colleges and universities. But her grades did not match, which frustrated her parents and teachers, who knew she was smart.

The problem began years before. Galloway was a happy-go-lucky kid until she reached the seventh grade. That’s when her cousin, Mikel Dickson, with whom she was very close, was shot and killed on Leroy Avenue on Buffalo’s East Side. Dickson was more like a brother than a cousin, especially since her older siblings had already left home for college.

After he was killed in 1998, Galloway became angry with life, angry at the world, angry at everybody, she said. That unresolved anger manifested itself in school.

Then she received an application from Liberty University in Lynchburg, the Christian university founded by Jerry Falwell. She had never heard of the school, but the page with a red stamp that read "fee waived," got her attention.

Applicants were required to complete an essay about a person who changed their life. Galloway wrote about her cousin, Dickson. She mailed the application on a Saturday and received an acceptance letter from the university the following week.

"I just felt like I heard the Lord say, ‘This is your second chance,’" she said. 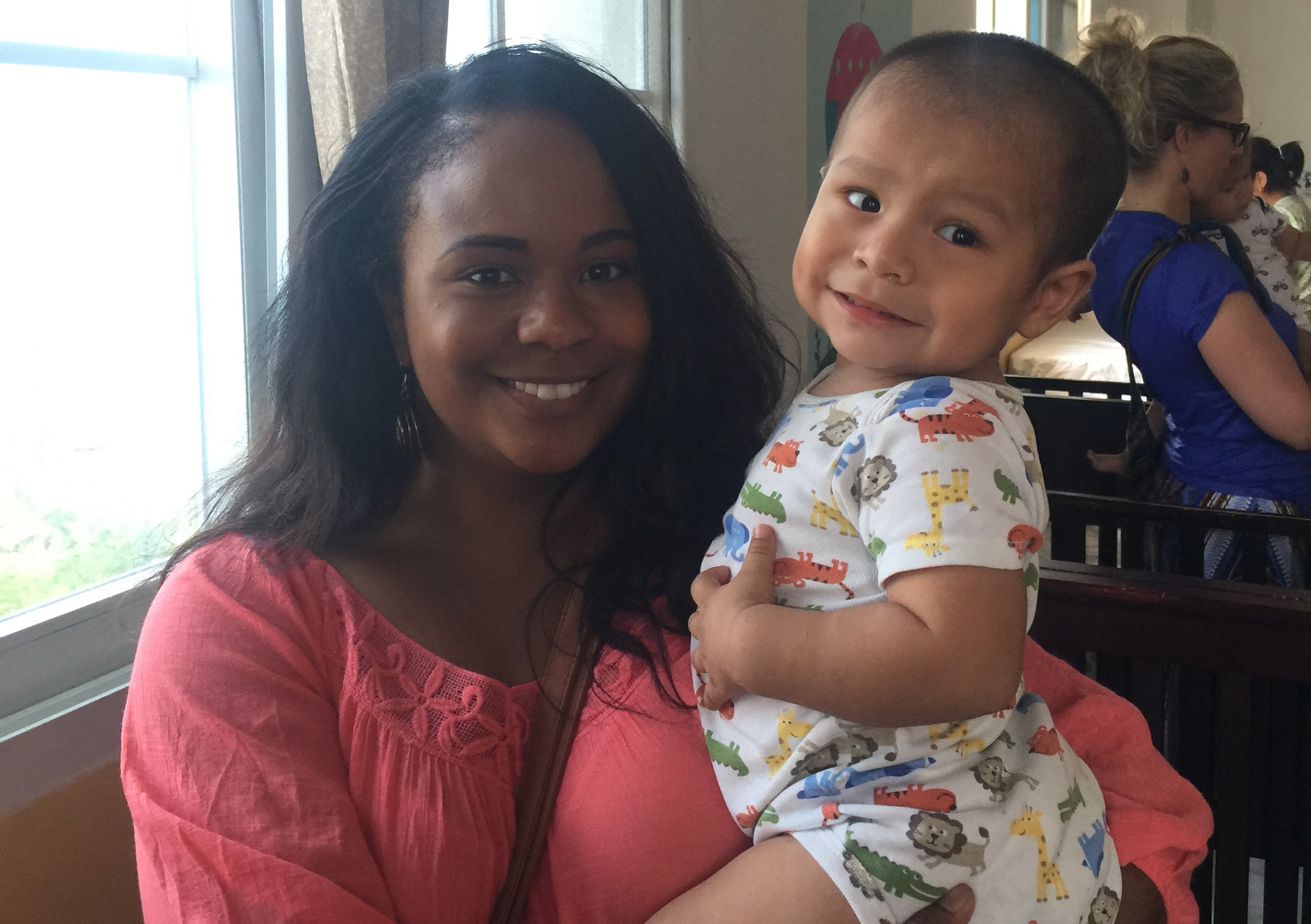 After getting a "second chance," Kelly Galloway founded an international program to help those in need, like this orphan in Guatemala's Hope of Life Hospital.

Despite the fact there were only a few other African-Americans on the Liberty campus, Galloway - who earned a degree in business marketing - said she never felt out of place.

"She was a young lady seemingly trying to find her way, trying to find her calling," said Bishop S.Y. Younger, senior pastor of RAMP Church International. He describes Galloway as an innovator and a strategist who gives 100 percent once she sets her mind on something, but whose transformation was not an overnight process. The seed of helping others was sown in Galloway through the civil rights activism of her father and St. John Baptist Church, as well as her time at Liberty, Younger said.

"That really pushed her. She’s the product of cross-pollination of northern drive and southern charm," he said.

According to the Department of Homeland Security, victims of trafficking often are lured with false promises of well-paying jobs or are manipulated by people they trust. Instead of finding new opportunity, they are coerced into prostitution, domestic servitude, farm or factory labor, or other types of forced labor.

The International Institute of Buffalo has worked – along with investigators, service providers and prosecutors – with more than 600 survivors of human trafficking, said Amy Fleischauer, its director of survivor support services.

"We’ve worked with survivors who have escaped from farms, the hotel sex-work industry, domestic servitude situations, where nannies are not allowed to leave," Fleischauer said. "They’ve also escaped from restaurants, convenience stores, massage parlors, gas stations, construction sites. We’ve had some cases from the New York State Fair. Some survivors are U.S. citizens and some who are males, females. Nine was the youngest, and the oldest was 83."

To gain more insight into the problem, Galloway interned with the international anti-trafficking organization A21 Campaign earlier this year. She worked in its safe house in Greece and with refugees entering the country, who often are targets for trafficking because they are very desperate. While there, she gained a clearer picture of how getting victims ready for the workforce is key to transitioning them back into society.

But even with her accomplishments so far, Galloway says she is not done. Stateside, she wants to open safe havens for the elderly and people with special needs, a rehabilitation center for drug addicts and a place for displaced military veterans to call home.