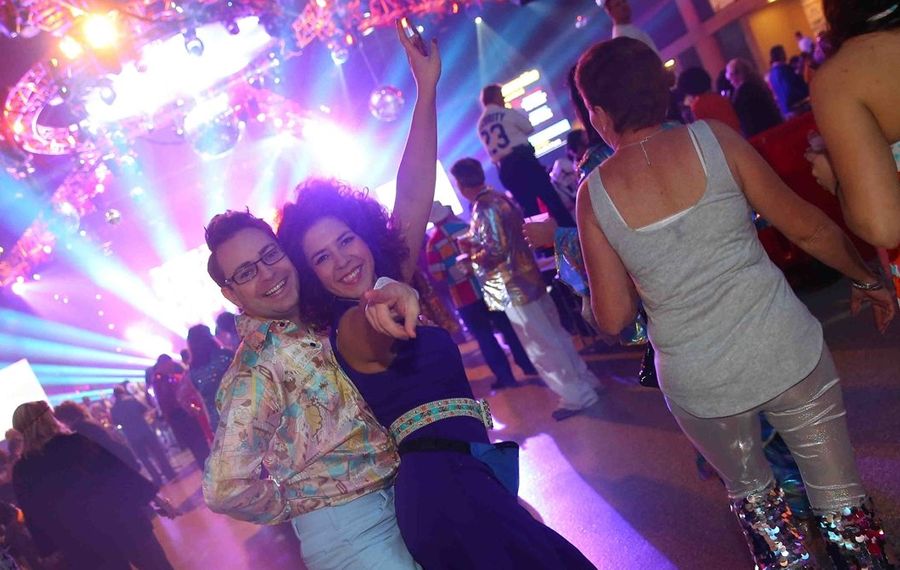 Mirror, mirror, on the ball, who is the fairest of them all?

Buffalo, hands down. Nobody else has a party to rival the World's Largest Disco.

The disco is part of the polyester fabric of our region. It always sells out in advance (this year is no exception). Seven thousand glitzed-out revelers flock annually to the disco, traditionally held at the Buffalo Convention Center on the Saturday night after Thanksgiving. The party has raised $4.5 million for Camp Good Days and Special Times and found its way into the Guinness Book of World Records.

Thrift shops are hopping weeks beforehand, as the faithful rifle through them in search of sequins and glitz. Marty's Formal Wear and other tuxedo companies rent out leisure suits. On the night of the disco, diverse crowds can be can be seen heading toward the convention center in jumpsuits, platform shoes and Afros. Some costumes are authentic. Many are not.

Pietrowski, who is in the insurance business, is an amateur party planner. He credits three people -- businessman Robert Richter, and legendary deejays Dave Gillen and Charles Anzalone -- for helping him get that mirror ball whirling, 23 years ago.

"The great part now is, as some of our customers age out, we're replacing them with their children, and it's fabulous," he said. "I hear from people saying, 'My daughter just turned 21, and she's been dying to go to the disco."

A wave of interest in local history helps boost the bash. The disco boasts airline seats from Club 747 and signs from Mulligan's and the Playboy Club.  Screens flash vintage footage of 1970s Buffalo sports events, old TV commercials, and local newscasts from the disco era.

Celebrities add their own sparkle.

They are announced at the last minute, ever since the year "CHiPS" heartthrob Erik Estrada left Pietrowski in the lurch just days before the event. But they are top notch. The disco has welcomed the stars of shows including "The Brady Bunch," "Starsky and Hutch," "Happy Days" and "Bewitched," as well as Deney Terrio and David Cassidy.

It all adds up to a great escape, said Liz Smith, a local tour director who is attending this year.

"After thinking about it for years, I finally went last year with a friend from out of town who visited me that weekend specifically to go to the disco," she wrote in a late-night text. "We are both tour directors who work hard all spring, summer and fall, and this was a great way to blow off steam at the start of our winter off-season.

"We put together sparkly outfits that we thought fit the bill, but we were so impressed with all the other costumes we saw. We saw wide lapels on the men, and sequins on the women. We especially loved the themed costumes from the mid-'70s, like Princess Leia from 'Star Wars,' a woman with a giant disco ball as a headpiece, and a set of flight attendants in orange retro uniforms."

Most of all, she loved hitting the gigantic dance floor and dancing to a parade of disco hits ending at midnight, as tradition dictates, with "YMCA."

"The music is just so good to dance to," she said. "It's timeless."

"When we play a really good song, you can actually hear the crowd start to roar when the song comes on," he said. "The music makes people laugh and smile.

"That's the greatest part of the event, everyone laughing."