Winter storm Argos affected all of the fishing in the Western New York area. Adapting to those changing conditions and finding places to fish can be a bit of a challenge. High winds on Lake Erie muddied the water up and those turbid conditions flowed through the river system and created some problems. One of the best places to fish was the lower Niagara River from shore along Artpark. Ricardo Davila of Wheatfield reported that shore anglers are still catching trout with some consistency. On Monday, despite the stained water with about a foot of visibility, he did reel in a fair number of lake trout. Remember lake trout are out of season. He did hook into a big steelhead, as well. The fish, combined with the current, was too hot to handle and it spooled Davila. To adapt to the changing water conditions, he changes his presentation. When the water was clearer, he was using in-line spinners. But they weren’t working so he switched to brightly-colored spoons. Instead of a steady retrieve, he lets it drift in the current and flutter down. A few quick jerks off the bottom get the attention of the fish. Some of the fish are hitting right near the shoreline. Chartreuse, yellow and silver have all worked between two-fifths ounce and two-thirds- 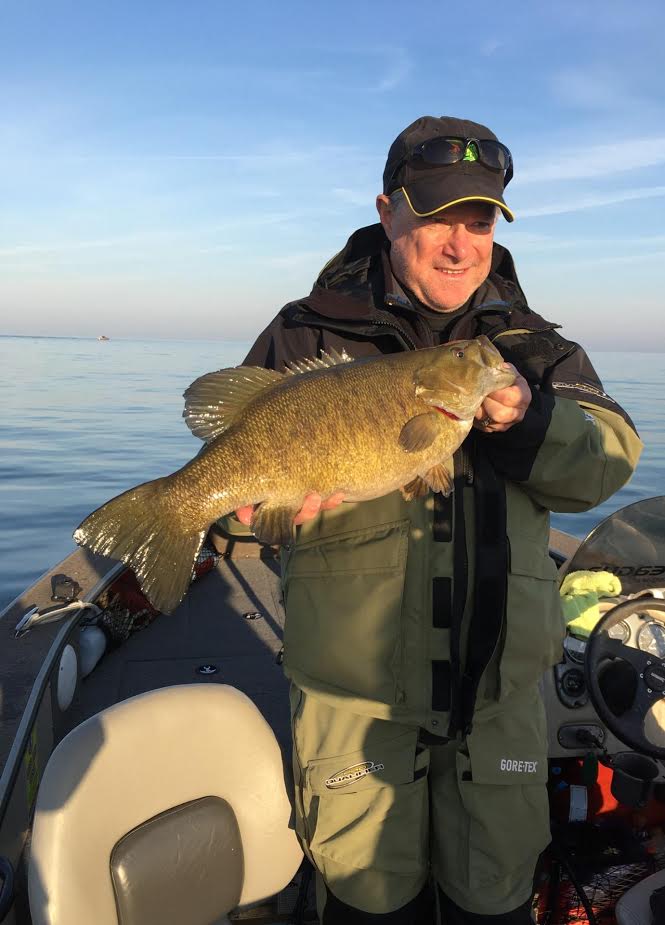 Larry Cabral of New Jersey caught this 6=pound, 7-ounce smallmouth on Saturday morning on the Niagara Bar while fishing with Capt. Jeff Draper of Grand Island with a Kwikfish.

ounce sizes. Working the shoreline, moving from one spot to another, has also helped to improve the number of hook-ups. The boaters have been shut out of the action since Argos blew through over the weekend. Just prior to the heavy winds, boaters were doing well on trout along Artpark by drifting Kwikfish or MagLips off three-way rigs. That same set-up was working on the Niagara Bar for Capt. Jeff Draper of Grand Island on Saturday morning. Larry Cabral of New Jersey managed to catch a lunker smallmouth that tipped the scales at 6 pounds, 7 ounces. It was a silver K-9 Kwikfish with a long leader (5 to 7 feet long). Because the water was so clear, he was using 8-pound test fluorocarbon Seaguar line. They were in 18 feet of water. After a few bass they ran up to Artpark to catch trout and even a walleye. Clear water is not the case now. That said, guides will be heading back out in boats starting Wednesday and Thursday. In the upper river, musky will be a popular target with the closing of musky season on Nov. 30.

If the tributaries have water flow, there will be some fish in them. Johnson Creek has been producing some brown trout and a few steelies. Ditto for 18 Mile Creek and Burt Dam. The Oak Orchard River is another popular spot right now. Eggs or egg imitations are working, as well as streamers and woolly buggers. With clear conditions make sure to downsize your line, hook and bait. Single egg presentations may be needed to get a trout to take a bait. With rain in the forecast, it could help pull some more fish into these tributaries. Keg Creek has a beaver dam at the mouth; Four Mile Creek also has flow issues and no opening for fish to enter at. Wes Walker at The Slippery Sinker in Olcott is also reporting some fresh salmon are still arriving on the scene 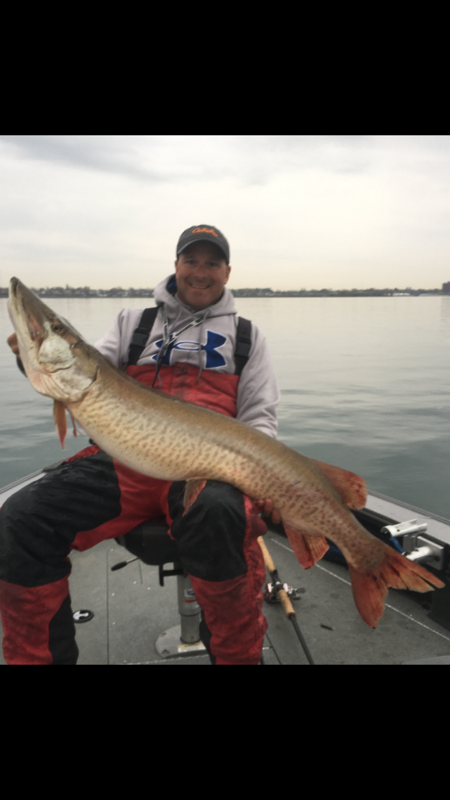 Capt. Chris Cinelli of Grand Island managed to catch this monster muskellunge in the upper Niagara River, a 48-inch fish that would probably tip the scales at over 35 pounds. He caught it as last week's Fishing Beat was ready to come out.

Most of the tributaries in the lake are low and clear right now according to Danny Colville with Colville Outfitters in Hamburg. Because of that, fish need more water to make their move. The upper stretches of Cattaraugus Creek can be good if you are willing to walk. Colville likes presenting different baits like soft plastics and small jigs. The lower end of the Catt has been producing good numbers of fish, but only a few fish at a time have been making the run up. That could change if we get some rain. If you want to target fresh fish in the system, white jigs, streamers and roe bags top the list for Colville. The Buffalo tribs (Scajaquada, Smokes) are getting a few fresh trout showing up but good numbers are staging and getting ready to make their run. We just need a good rain to trigger the masses. Some brown trout have started showing up in the small to medium-sized tribs. Because of the clear conditions, Colville recommends single eggs or micro jigs. The new soft plastic beads seem to be out-producing the hard beads at times so you might want to add some to your fishing arsenal. No one has been able to get out on the main lake for perch or bass in a while and the first winter blast has forced many guys to put boats away for the winter. If you still have access to a boat, though, try trolling a creek mouth for trout with a stickbait.

Walleyes are still being caught from Ashville Bay to the bridge in 10-15 feet of water according to Craig Robbins. Use No. 11 or 13 jointed stickbaits in black and silver or perch colors. Musky trollers are pulling oversized crank baits from the Bell Tower at Chautauqua Institution to the northeast corner of Warners Bar. Focus on 8 to 20 feet of water. Remember that musky season closes on Nov. 30. That will be it until the end May when the inland season reopens for those fish. The regular bass season also closes Nov. 30, but the catch-and-release season takes over at that point, artificial lures only, until the regular season reopens on the third Saturday in June. Mike Sperry at Chautauqua Reel Outdoors reports perch are still active from boat and shore. Use a small jig tipped with a minnow and fished under a float. Walleye are also being caught in the northern basin by jiggers, but not in the numbers seen previously.

Catches and Hunts of the Week