The gleaming subway station taking shape at the base of the new University at Buffalo Medical School on Main Street may prove just what the commuter doctor ordered.

Though scaffolding and construction equipment still surround the outside of Metro Rail’s Allen-Medical Campus Station, a reconstructed inside is already curing growing pains on the burgeoning downtown complex.

More than 17,000 people are expected to work at the Buffalo Niagara Medical Campus in the years ahead, and now a $4.4 million station sporting the latest transit amenities and a big city feel is greeting commuters who won't have to worry about finding that rare place to park.

“It’s bright, it’s open, and we’re excited about what it all means,” said Thomas George, the Niagara Frontier Transportation Authority’s director of public transit. “I think it looks really slick and will tie into the whole medical theme.” 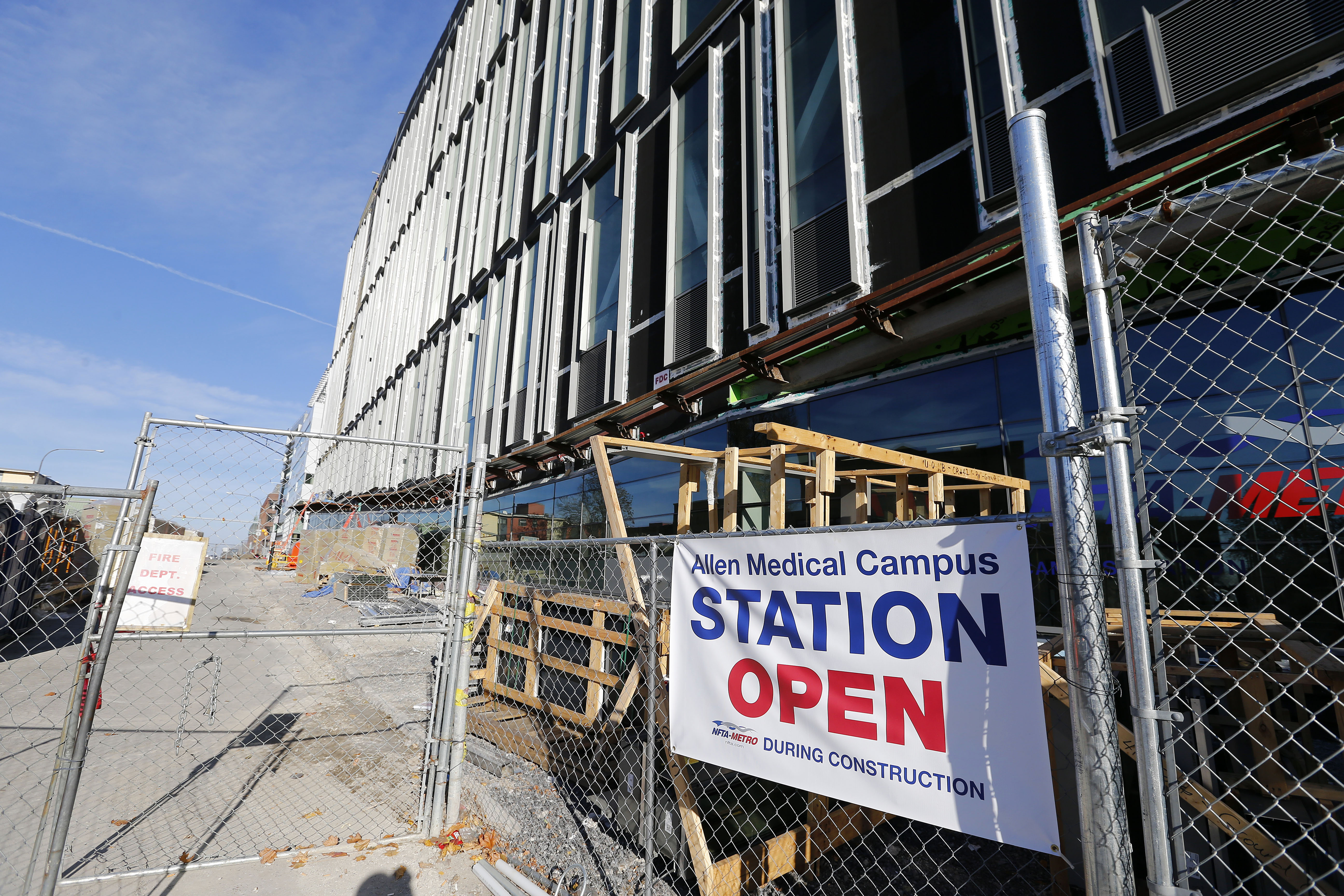 The $375 million, eight-story med school – officially dubbed the Jacobs School of Medicine and Biomedical Sciences – is slated to open next fall. More than 2,000 medical students, residents and faculty will work in the state of the art facility, and future doctors and other Medical Campus employees alike will arrive and leave every day via Metro Rail.

The complex rises above the new rail station, and significantly enhances the Medical Campus goal of promoting the use of transit for its thousands of employees.

"We're really looking here at urban redevelopment," said Medical Campus President Matthew K. Enstice. "This is the true transit-oriented development our community has been talking about for years."

Commuters like Dynasty Hall were already impressed Friday by video screens announcing arrival of the next buses and trains, and by an interactive kiosk similar to those in New York City subway stations that provide system maps for riders, information on how to purchase tickets, and neighborhood attractions.

“It’s nice, it’s bigger, and way better,” said Hall, who was en route to her job at Queen City Manufacturing.

George believes the new station – the first major overhaul of any subway stop since the system opened 30 years ago this month – will fit nicely into the medical school and campus. A sculpture titled “Gut Flora” resembling the double helix of DNA will soon be mounted near the main entrance. And by the time the 9,500 square-foot station is completed early next year, a “grab and go” similar to the Hudson News stands in the New York City subway will sell snacks, beverages and newspapers.

An escalator and elevator will transport students and faculty into the medical school, while stainless steel walls are slated to be unveiled soon. George said the new state-of-the-art fare collection featuring turnstiles will be installed on the mezzanine when ready in 2018. And landscaping will adorn the outside.

For now, the new video screens that will eventually appear in all stations are guaranteed to prompt either an urgent dash or a slow meander to trains below. As George explained the new screens, they showed the next inbound train was due at Allen-Medical Campus in four minutes.

“When I look up at those screens, I know I had better run like the dickens because one is due, or heck, I’ve got time to get something at the stand,” he said.

“It’s a platform we can build on,” he added. “This is the showcase for all our new technology throughout the system.”

Metro Rail normally ferries about 24,000 daily riders through the 6.4 mile system, and officials expect the 2,100 using Allen-Medical Campus Station to increase significantly upon completion. Studies are under way for possible Metro Rail extensions through the Delaware, Lackawanna and Western Terminal at the foot of Main Street, and another through Amherst to UB's North Campus.

NFTA officials are enthused about the new Allen-Medical Campus look, George said, even as the system ages. A new escalator in the Delevan-Canisius College Station, he said, represents the kinds of expenses that will continue to challenge the 30-year-old subway.

Medical Campus officials, meanwhile, always have maintained that Metro Rail allowed construction in the downtown core without the need to build huge and expensive parking garages. They planned sky bridges and subway connections to provide a “coatless environment,” while new housing and development like that springing up around Allen-Medical Campus is already taking shape.

George forsees use of the LaSalle Station park-and-ride lot increasing when the medical school and campus are completed, and predicts the day when new development will rise above other Metro Rail stations too.

“We’re excited to be a part of the medical campus and to be relevant in the growth of this community,” he said. “And in our business that’s key – the need to be relevant.”