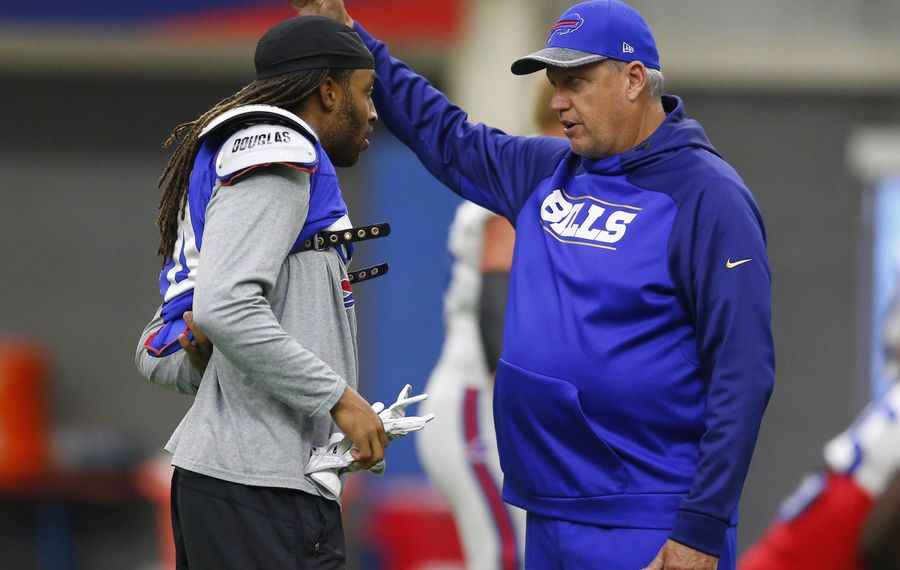 Say what you will about Stephon Gilmore.

No, he isn't playing consistently well. No one in a secondary that has allowed an NFL-leading seven completions of 50 yards or more falls into that category.

Yes, Gilmore is making more than $11 million and entered the season wanting to be the league's top-paid cornerback.

If you choose to point to those factors as reasons for his lacking the credibility to blame the problems with the Buffalo Bills' secondary more on the scheme than on the players, fine.

But Gilmore is hardly a novice when it comes to discussing the intricacies of his position.

Since joining the Bills as a first-round draft pick in 2012, he has played in four different defenses. He has been part of ones that primarily allow the coverage load to be shared amongst the defensive backs and ones that, like the current scheme, require the DBs to carry it individually.

On Wednesday, after Rex Ryan pointed a finger directly at the secondary's inability to make opponents fear throwing "vertically" against the Bills as the main reason their defense has let the team down on the way to its 4-5 record, Gilmore quickly pointed one back at Ryan and the rest of the defensive coaches.

Translation: If you're constantly putting defensive backs out on an island, don't act surprised when an occasional tsunami washes them into the ocean. That has happened with Gilmore, Ronald Darby, and Nickell Robey-Coleman.

Ryan responded by making his top talking point of the week the potential to shake things up by possibly going with new starters to replace Darby (Corey White) and Robey-Coleman (rookie Kevon Seymour), and more rotation at safety where one change was made on the roster (Duke Williams released in favor of veteran free agent James Ihedigbo).

Gilmore's job is apparently safe, which is probably why he felt emboldened to publicly address the situation from a strategic standpoint when Ryan addressed it from an execution perspective.

Maybe Gilmore has already concluded there is little chance he will be with the Bills when his contract expires after the season. He likely realizes they won't meet his money demands. And Gilmore and his agent certainly will make their feelings clear that he does not want a one-year franchise tag, should the Bills somehow decide it's a good idea to keep him as part of a defense that puts the highest premium on cornerbacks.

How it all plays out remains to be seen.

What seems to be clear, however, is that once again, a veteran player is speaking out about Ryan's core strategy.

Last season, Mario Williams was the loudest voice in a front-seven choir that sang an unhappy tune about the scheme's complexity and having to drop into coverage and play containment rather than simply having the freedom to tear after the quarterback. That, on top of his hefty salary, is why Williams is playing for the Miami Dolphins.

If things continue to go south for the secondary, history could very well repeat itself with Gilmore because this likely won't be the last time he has something to say about how he and his fellow Bills defensive backs are required to play.