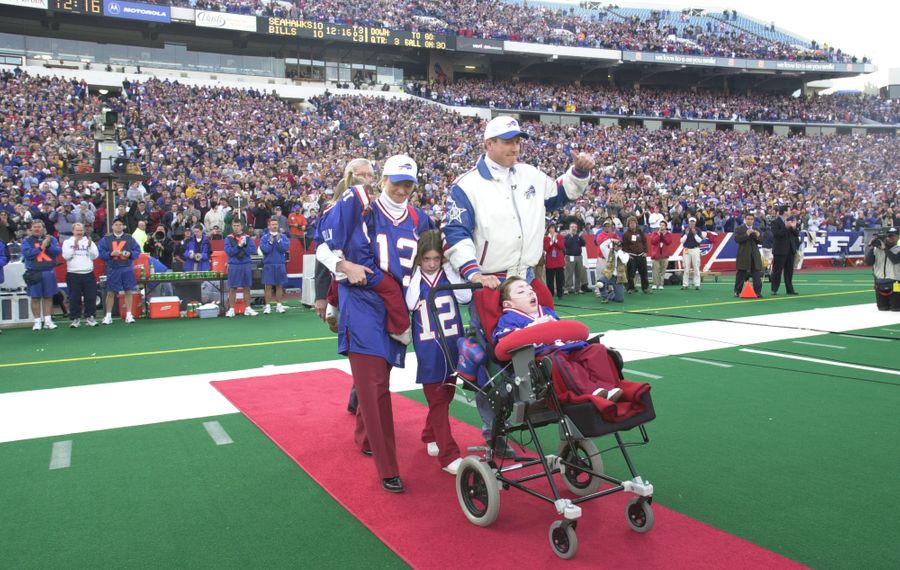 Jim Kelly had a memorable 11-year career as quarterback of the Bills.

That was recognized this date 15 years ago, when he was placed on the Bills' Wall of Fame. Additionally, his No. 12 was retired by the team that day, making Kelly the first player in franchise history to receive the honor.

As great and unforgettable as the Pro Football Hall of Famer was on the field, this time, Kelly gave Buffalo fans a lasting memory while not in uniform.

A ceremony commemorating Kelly's career took place at halftime of Buffalo's eventual 23-20 loss to the Seattle Seahawks on Nov. 18, 2001, at Ralph Wilson Stadium. By the time the second half began, Kelly's name and number was stamped high in the stadium, alongside the other Bills greats on the Wall of Fame. 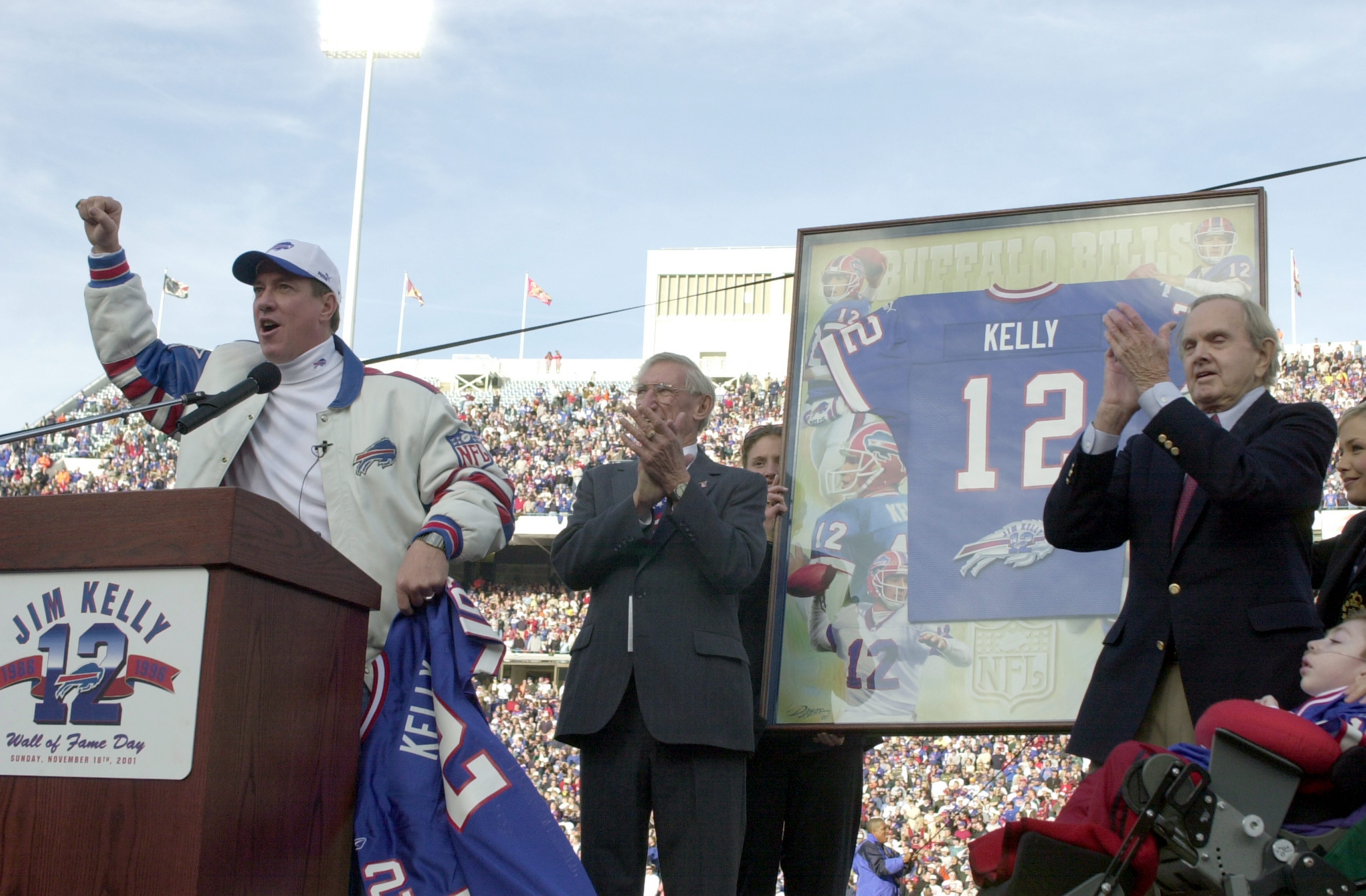 Kelly created many notable moments for fans during his playing days — and that didn't stop post-retirement as he gave a moving speech nearly five years after his final snap. His halftime words might be more fondly remembered than some of the great passes he made during the late 1980s and '90s.

Kelly, undoubtedly, was a hero to more than a few onlookers. Thing is, the former QB's hero was in attendance, too.

Near the end of his speech, an emotional, choked-up Kelly expressed exactly how much his son, Hunter, meant to him. Hunter, who after being born was diagnosed Krabbe disease, a rare, often fatal degenerative disorder that affects the nervous system, was 4 at the time and Kelly's inspiration. Kelly called him his "soldier" and "hero" in front of the large gathering that included the late Ralph Wilson and former teammates.

Hunter died in 2005 at 8 years old, long after a doctor told the Kellys that Hunter likely wouldn't live to see his second birthday.

Emotional Kelly basks in the glow of his son

Buffalo Bills fans were celebrating along the Thruway when Jim Kelly was ushered into Western New York in 1986. They embraced him, they criticized him, they idolized him for 11 years. Sunday, they cried with him.

Kelly joined an elite group of players Sunday when the Bills placed his name on the Wall of Fame in Ralph Wilson Stadium and retired his No. 12 jersey.

Kelly made yet another comeback when he spent 20 seconds regaining his composure when his appreciation turned toward his 4-year-old son, Hunter.

Hunter suffers from Krabbe disease and has been his father's inspiration since Kelly retired after the 1996 season.

"I've been waiting for this a long, looong time," said Kelly, his voice cracking. "I dreamed about what every dad dreams about -- playing catch with your son, going fishing, hunting, throwing the ball.

"My son was born on Valentine's Day, Daddy's birthday. He won't be able to do what Daddy does. But with my son, so many kids are going to benefit from him.

“Today, that name up on that wall symbolizes the strength, the courage, the toughness of my son, my soldier, my hero, Hunter. I love you, buddy."

Kelly was honored during halftime of the Bills' 23-20 loss to the Seattle Seahawks. He became the first player in team history to have his jersey number retired. O.J. Simpson was the last Buffalo player to wear No. 32, but his jersey was never officially removed from use. 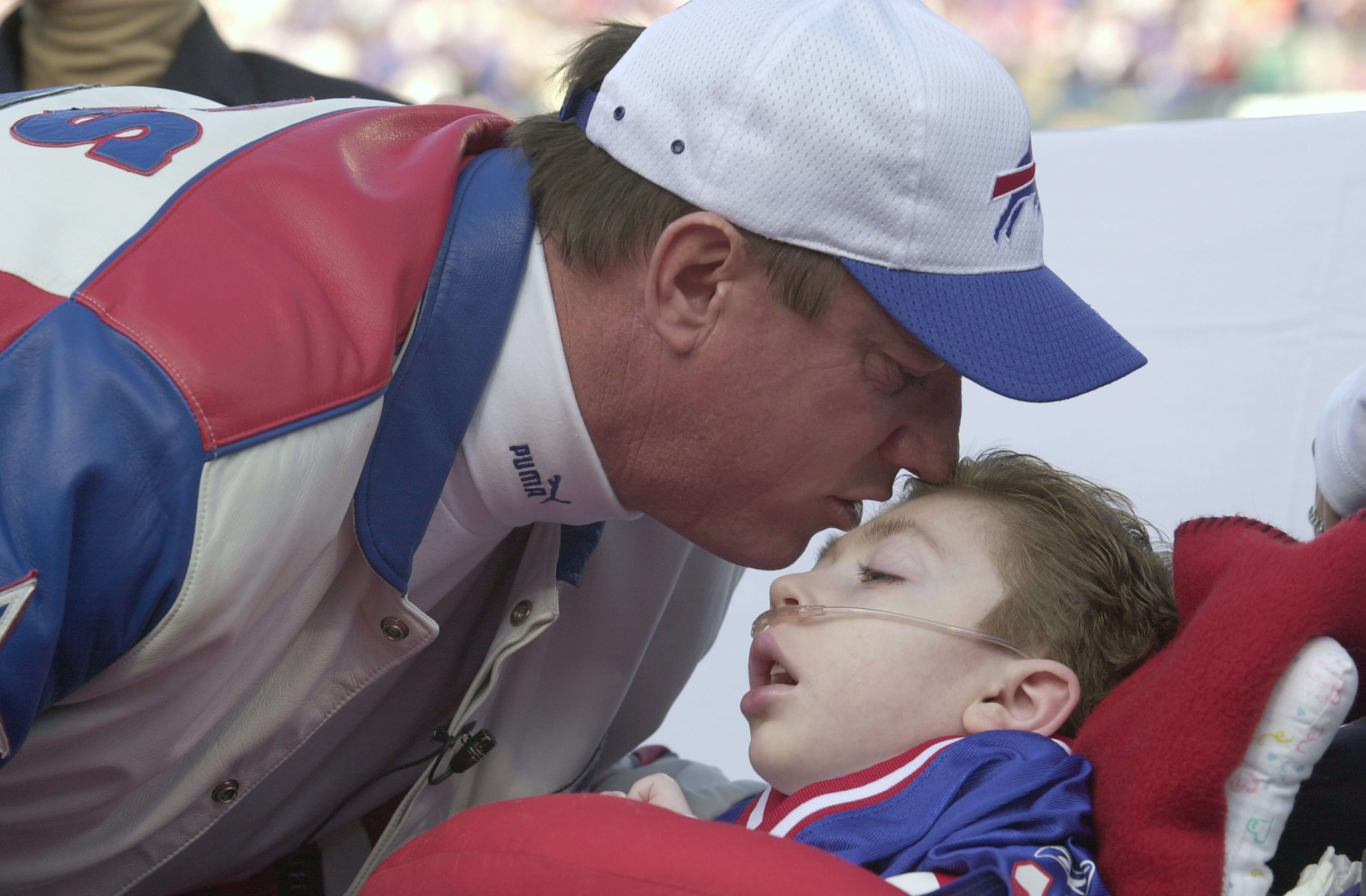 Kelly is widely regarded as the best quarterback in team history after guiding the Bills to four straight Super Bowls. He'll be eligible for the Hall of Fame in February.

Owner Ralph C. Wilson Jr. made the jersey announcement Sunday. Kelly raised his jersey to the fans before using it to blanket Hunter, whom Kelly pushed in a stroller toward a makeshift stage.

Kelly also was flanked by his wife, Jill, and their daughters, Erin and Camryn. Fans chanted, "Kel-ly, Kel-ly, Kel-ly," after he was introduced and again when his number was retired.

"Wow," Kelly said. "I can't say enough … This is the greatest day that could have ever happened in my life. It took everybody pulling together in this city. This is one big family. Thank you very much. I love you all."

Wilson also presented Kelly with a 2002 Chevrolet Suburban and a ring commemorating his place on the Wall of Fame. Wilson also gave Jill Kelly a pendant as part of the ceremony for her husband.

The Bills had a 50-foot inflated balloon bearing a picture of Kelly as the backdrop for the festivities. A banner with the No. 12 was spread across two sections on the visiting side between the 40-yard lines.

Hundreds of fans wore old No. 12 jerseys. Kelly watched most of the game from a suite with former teammates.

Among those who made the trip in his honor were Steve Tasker, who called the game for CBS, Kent Hull, Andre Reed, Shane Conlan, John Kidd, Will Wolford, Don Beebe, Pete Metzelaars, Jim Ritcher, James Lofton and Mark Pike. Thurman Thomas was unable to attend because his father was ill.

"He has great charisma," Lofton said of Kelly. "I don't know if it's because he's from a big family or always wanting to be the star, but he really was. He was the focus of our team. He was the catalyst. He was great in the clutch."