Here are some dishes you won’t find in many college dining halls: tacos made with soy-based chorizo and cheese, as well as peppers, onions, black olives, jalapeños, black beans and avocado; spinach and potato salad in a lime agave dressing; mac and cheese made with sweet potatoes instead of pasta, and soy cheddar. These are among offerings at Pitchforks, a new vegan food station in the main Economou Dining Hall at Canisius College, which suddenly finds itself at the forefront of institutional plant-based cuisine.

“This is better than my sister, Lindsey, who’s on her 40th veggie burger at her college in Pennsylvania,” said senior English major Marissa Mykietyn, 21, president of the Canisius Veg Club, who worked with former club president Rachel Pawleski and Chartwells campus dining hall chef Jennifer DiFrancesco to put together the Pitchforks concept.

The station opened to students, staff and the public at the start of this school year. Its rotating lineup of vegan comfort and street foods launched a Canisius-based, three-year effort by Chartwells – the school’s dining operation management company – to push more vegan, sustainable and fair trade foods.

Chartwells has seen a 400 percent increase in sales year over year from the vegetarian station it replaced, said John Tychinski, director of dining services. 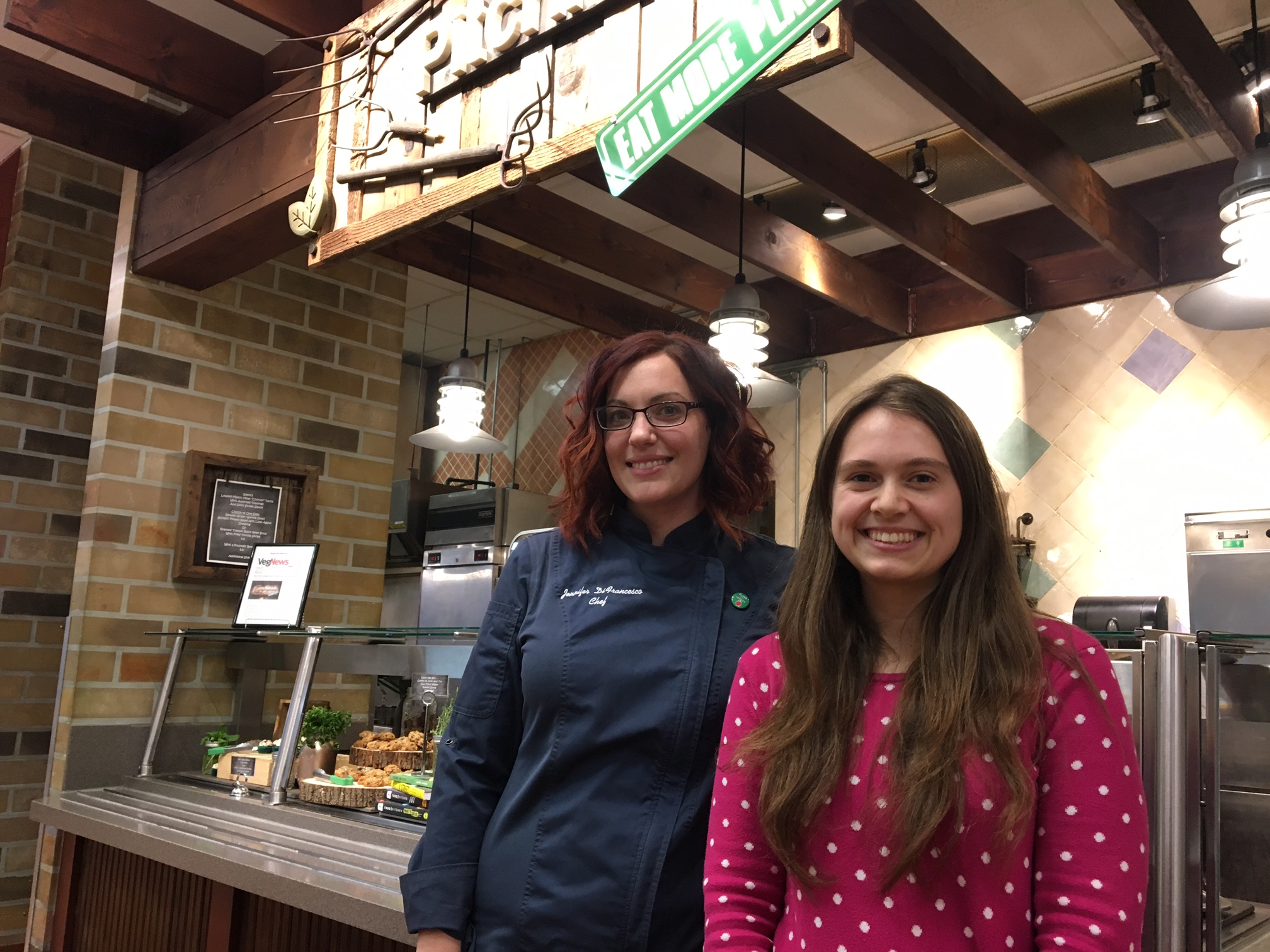 Canisius dining chef Jennifer DiFrancesco and Veg Club President Marissa Mykietyn were among those who put together the Pitchforks concept.

Jennifer DiFrancesco, dining chef at the school, developed the Pitchforks concept with help from the Veg Club and Canisius culinary chefs Glenn Szymanski, who is vegan, and Anna Rand, who is vegetarian.

“I wanted to see what staff and students saw as a vegan menu,” DiFrancesco said.

She also reached out to The Humane Society of the United States and Stefanie Heath-Higgins, the society’s local food policy coordinator, and Ken Botts, a vegan chef.

“They were a wealth of knowledge,” DiFrancesco said.

As they developed the concept, organizers also went to some of Buffalo’s best vegan and vegetarian hangouts, including Grindhaus, Perks and the Lexington Food Co-op. 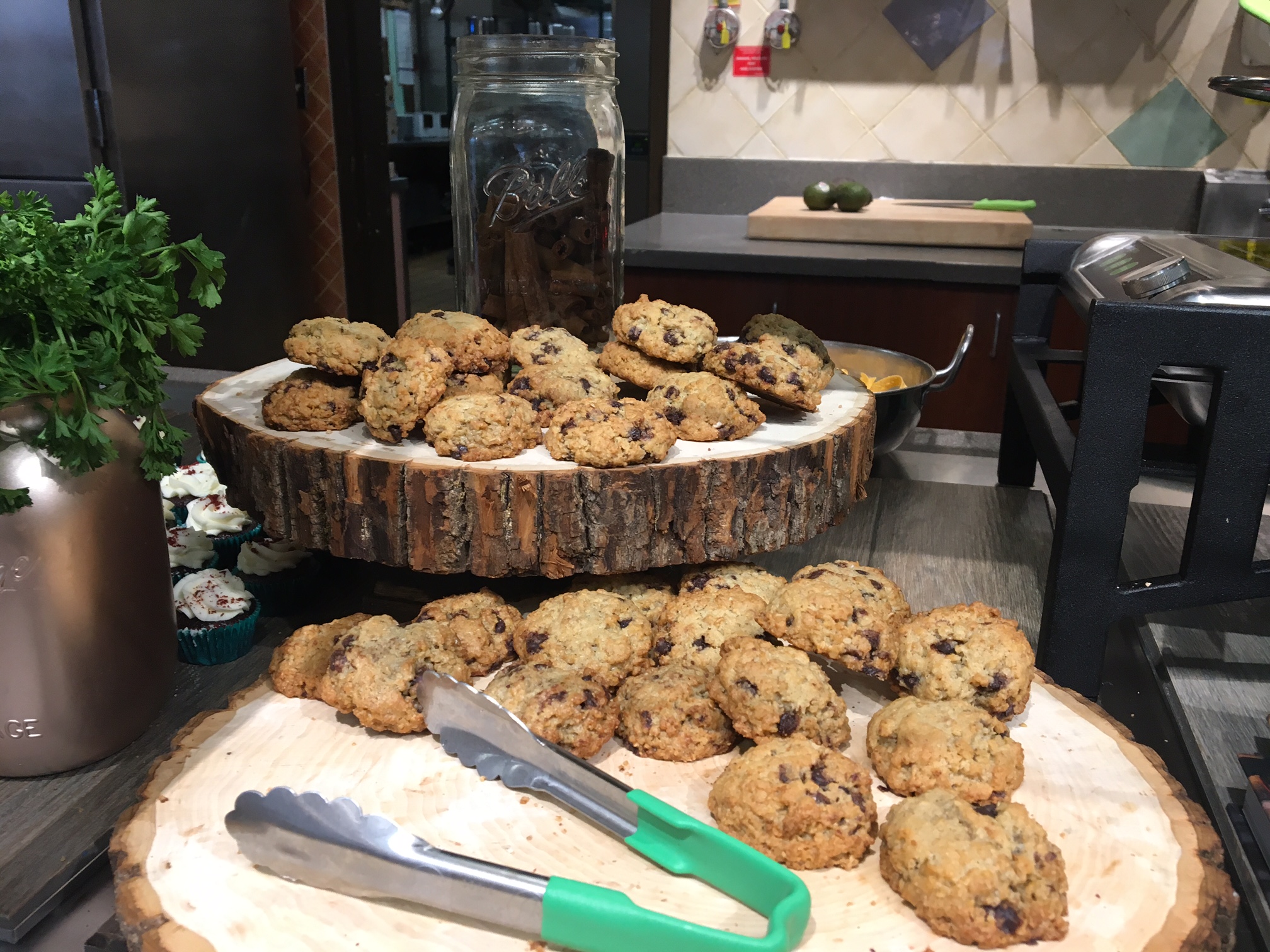 That work – and recipes borrowed from “The Thug Cookbook” series – helped the Chartwells staff put pull together a binder with recipes for entrees, sides, hummuses and desserts. The offerings run on a 28-day cycle.

Lunch entrees are $6 and include a choice of sides, as well as hummus and chips. Dinner is all you care to eat for $10.50 and includes all the dining hall food stations, including Pitchforks.

DiFrancesco said vegans, vegetarians – and meat eaters – including students, student athletes, staff and the general public, have made Pitchforks a dining choice.

Mykietyn couldn’t be more pleased, though she fears she won’t be able to cook for herself the way she has eaten on-campus this semester after she graduates.

Here’s what else the North Brunswick, N.J., native had to say:

We have about 20 active members. We have biweekly meetings that always have food and we like to have a campus cookout at the start of each semester with veggie burgers and veggie dogs. We’ve had a movie screening of the film “Vegucated,” a funny and cute documentary.

Q. What have been some of your favorite offerings?

The tempeh BLT. They put in soy sausage and Liquid Smoke. They had a lot of beets last year and I hated them, but this year I keep eating them, especially the ginger beets. The beer-braised cauliflower tacos, the tempeh Reuben, the (meatless ground) chicken enchiladas.

Q. When did you decide to go vegan?

I was a vegetarian in seventh grade and I transitioned to vegan September 1st of ninth grade. It was for the animals, after seeing (meat production) videos. You learn to have health reasons, too. I also like the community aspect of it. I can connect with people. It’s a positive way to look at food.

Q. What have fellow students told you about the dining station?

It’s been really, really positive. When we have our Veg Club meetings, we always talk about what was served. People are upset when they didn’t try something. They’re always happy to hear that meat-eaters have tried something and liked it, even if it was just a side. We’ve talked to a bunch of people who are trying to become more vegetarian. They eat at Pitchforks too and it’s nice to know there is good food, more than just salads, that they can try.