With Christmas approaching, it's crunch time. For the makers of sponge candy, and for the folks who love it.

Of all the Western New York specialties on our 100 Things list -- loganberry, chicken wings, beef on weck and more -- sponge candy could be the most mysterious. How to explain its bite, simultaneously crisp and airy? Or that taste, like toasted sugar?

Discussions about who has the best sponge candy can grow heated.

"You may as well ask who's got the best pizza," said Andrew Galarneau, The News' food critic. "It's deeply personal."

A finely tuned instinct led us to Abbott Road in South Buffalo.

If we can have the Hydraulics District and the Milk Bone District, surely we can have the Sponge Candy District. This would be it. Two storied candy shops sit practically right next door to each other. Ko-Ed Candies, 285 Abbott, dates to 1947. Park Edge Sweet Shoppe, 325 Abbott, debuted in 1948. 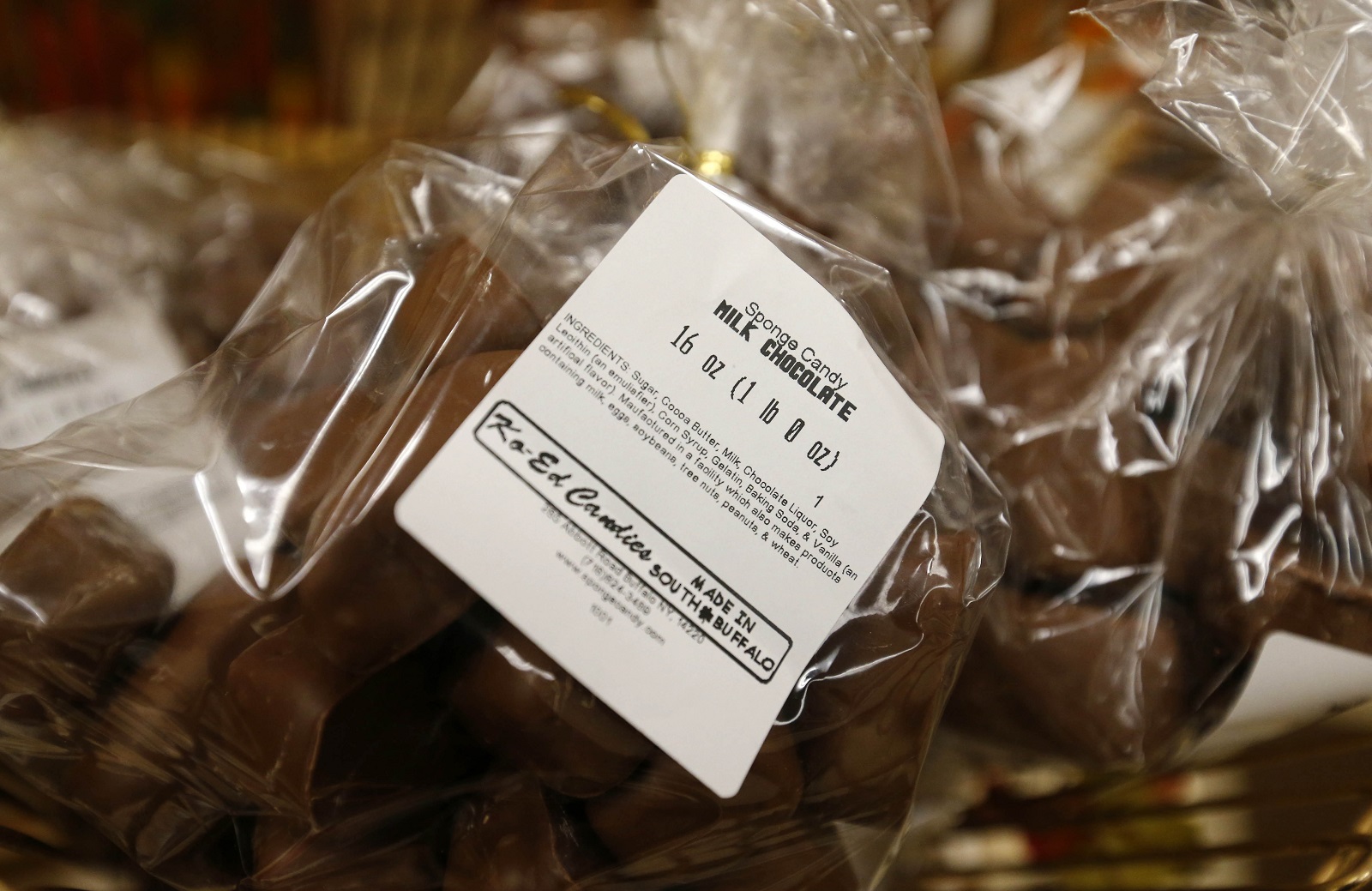 Ko-Ed was recently bought by another local company, Platter's. They kept their sponge candies separate.

O sweet mystery of sponge candy! To watch it being made is to understand why, although wildly popular here, it is virtually unknown elsewhere.

The candy is finicky, for starters.

"It's one of those temperamental things," said Vinny Libroia, Ko-Ed's co-manager. "If you cook it in a different room, it'll come out different." 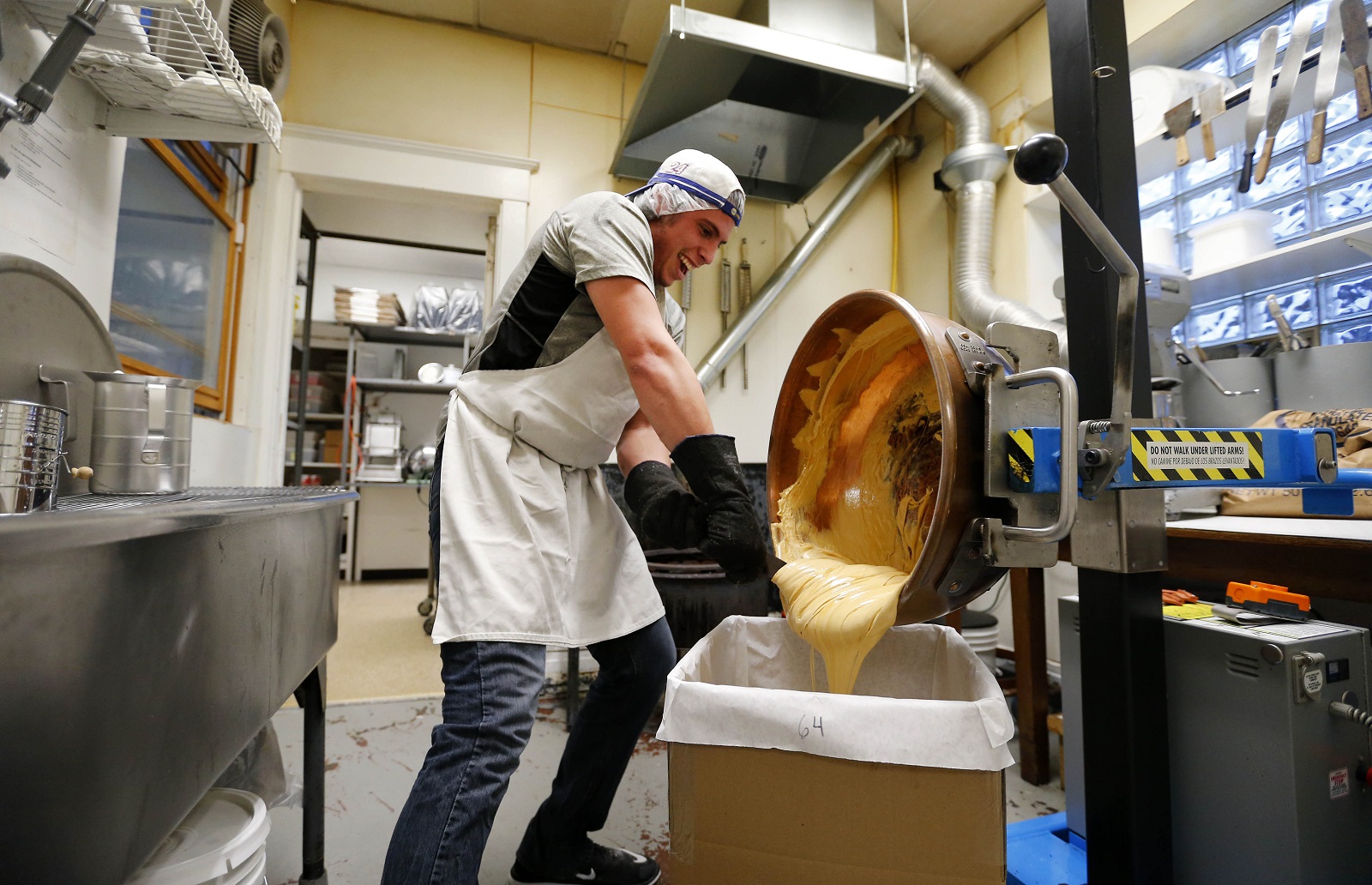 Ko-Ed is closed in the summer because you can't make sponge candy then.

"It's too hot. It doesn't come out right," DiGuiseppe explained.

Even when conditions are favorable, sponge candy lives up to its name, soaking up time and energy. As darkness fell on a weeknight, Libroia was armed with a giant paddle, whipping a huge copper kettle of sponge mixture. Corn syrup was in there, and gelatin, and baking soda. The floor was sticky. 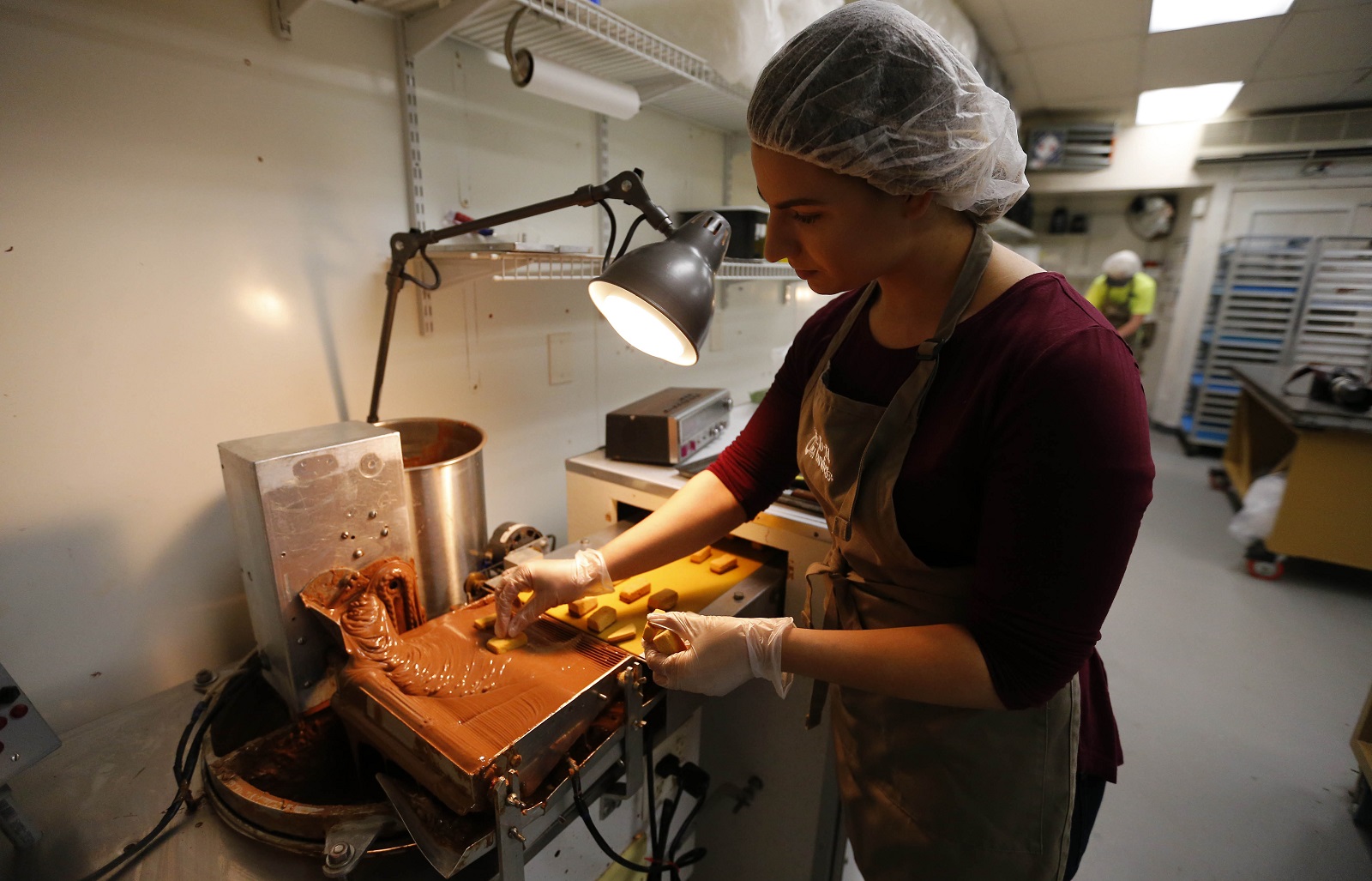 A mistake could not only ruin the batch, it could ruin the kettle. At last, satisfied, Libroia poured the molten stuff into a box lined with paper. Covered, it would gradually harden into a huge brick. Then, the outside edges are sawed off -- that's right, sawed, with a saw. The cube is cut into rectangles.

Finally comes the chocolate coating. An impressive machine helps with this -- but again, the process is hands on.

DiGuiseppe dipped one edge of each rectangle in chocolate, then fed it into the machine, which dried it and bathed it in chocolate. David Moteyunas then checked each piece. Any flaws must be patched up. Otherwise, the delicate inside would dry out. 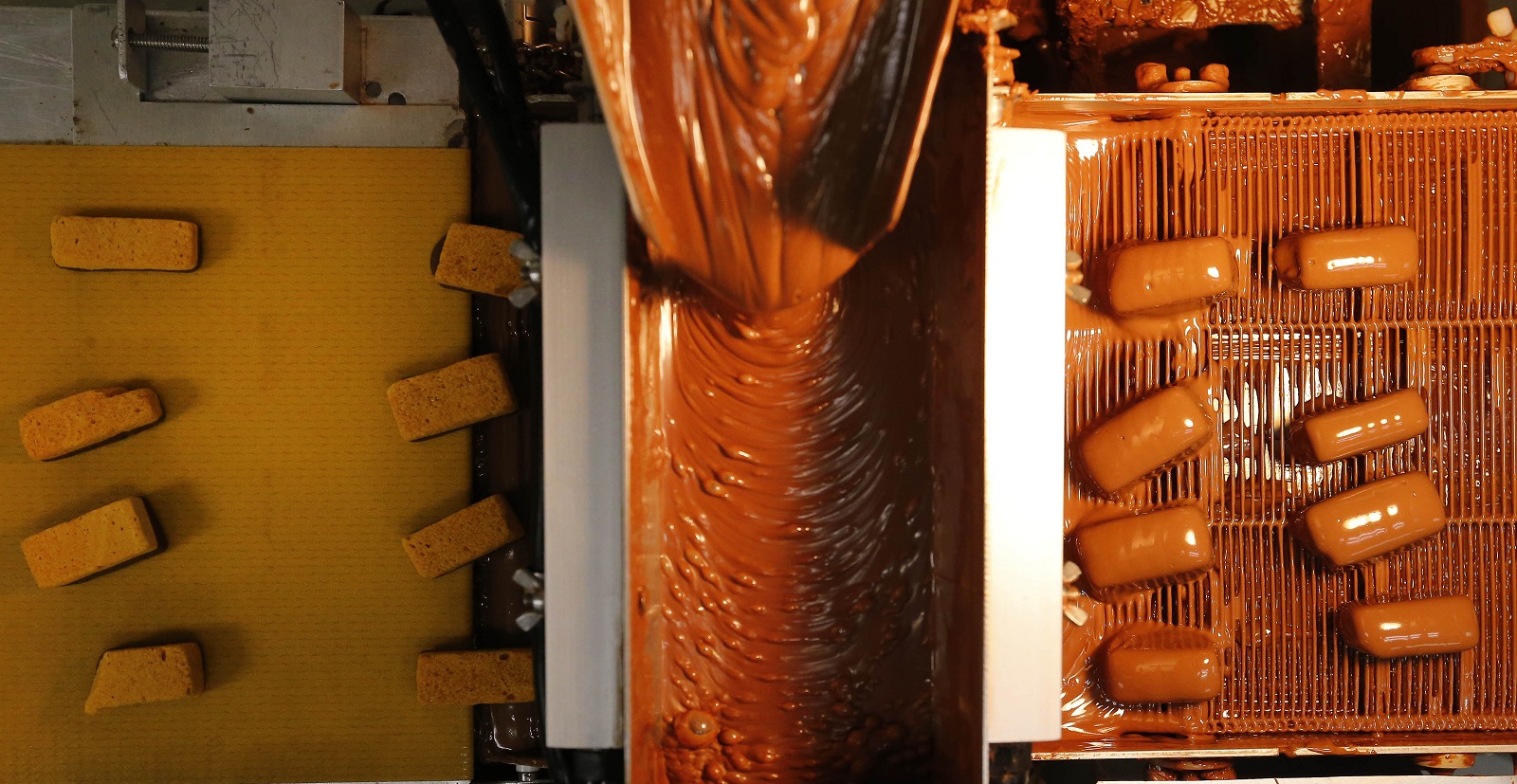 What science! Who dreamed it up? Even Libroia laughed that he didn't know.

The unanswered questions are part of the allure. Recipes are family secrets, handed down.

Two sisters, Maggie Mulvaney and Anna Hartog, bought the Park Edge Sweet Shoppe six years ago when it came up for sale. Hungry for authenticity, they located and consulted the shop's original owners, who now live in Florida. Mulvaney knows them only as Joe and Josephine. 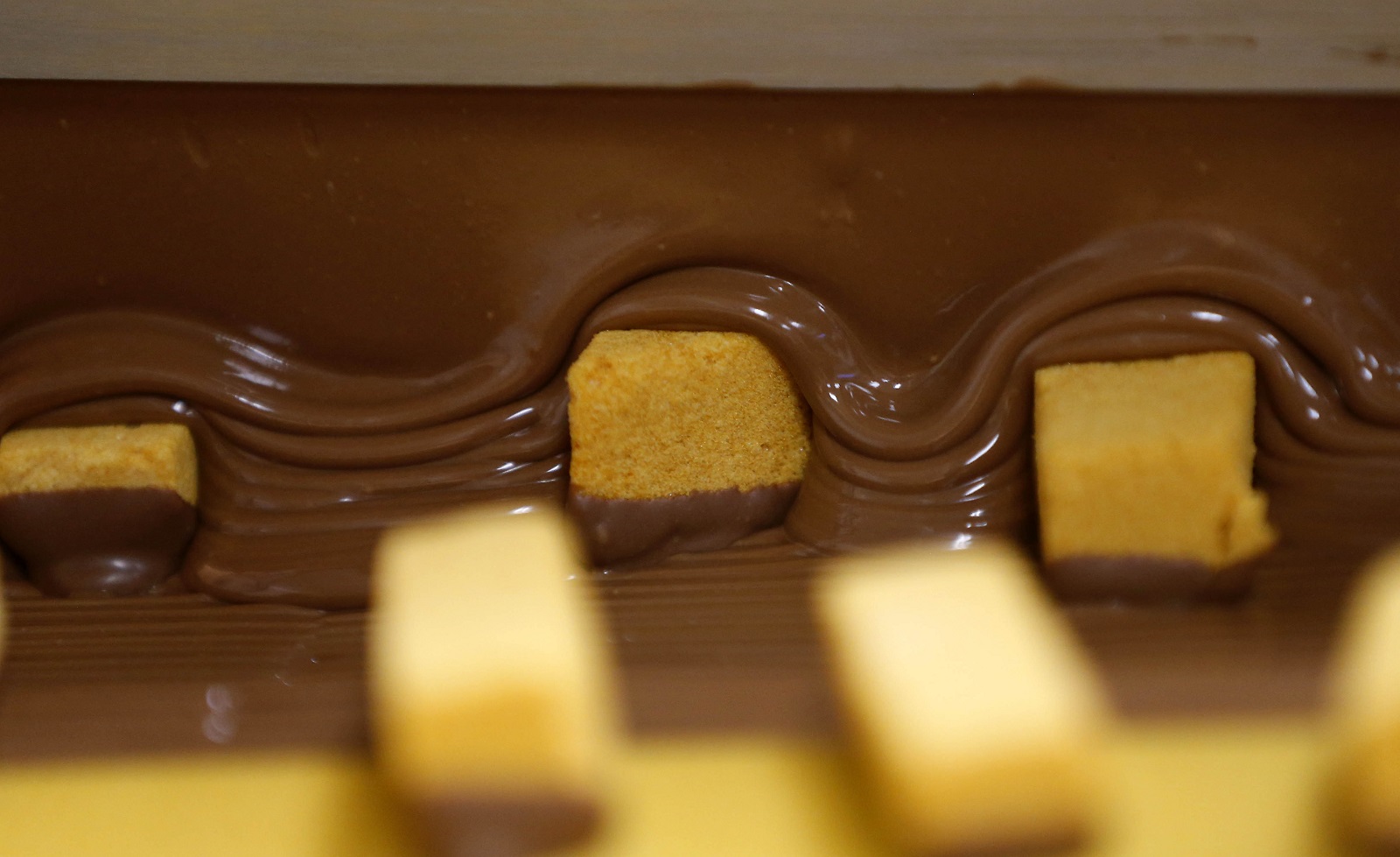 Wow, like Grandpa Joe and Grandma Josephine in "Charlie and the Chocolate Factory"? The coincidence seemed to surprise her. 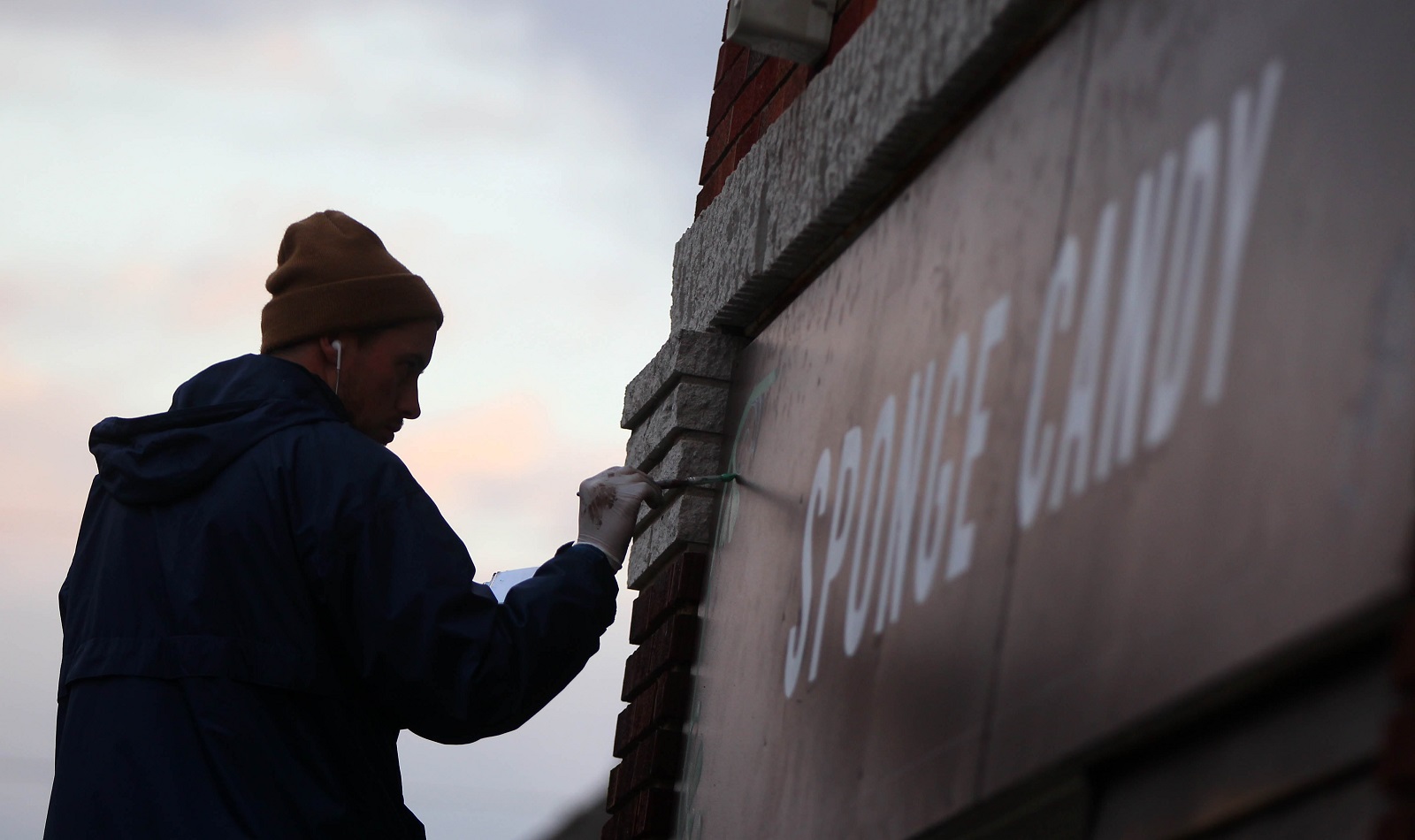 We saw the same kettle as at Ko-Ed, and the same cooker, a fearsome device that appeared to pre-date the Industrial Revolution. We saw the same Formica -- a coveted retro style, white flecked with gold. We saw saws.

"People who haven't lived in Buffalo for years, they say, 'Oh, my God, I miss sponge candy,'" Mulvaney said. 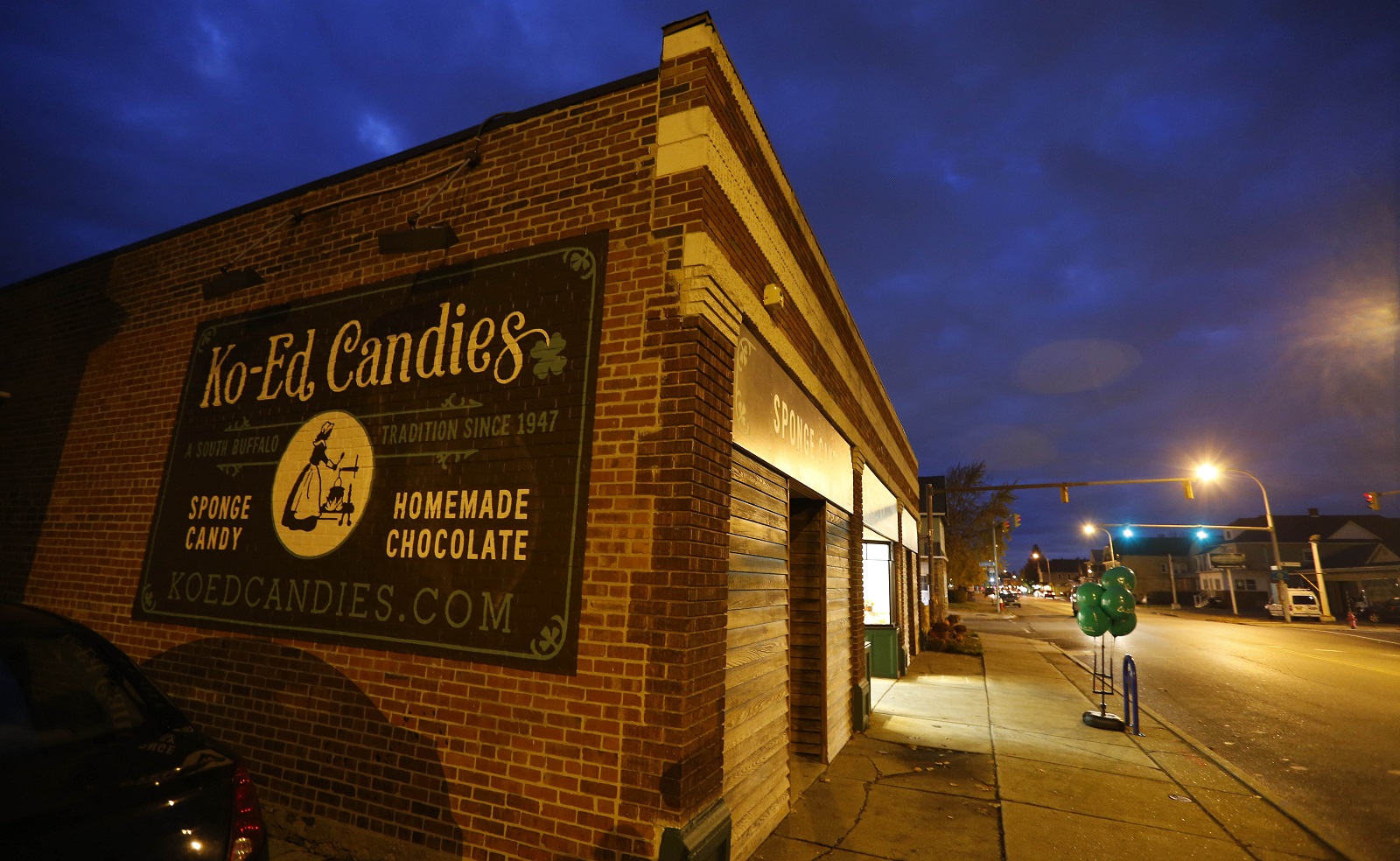