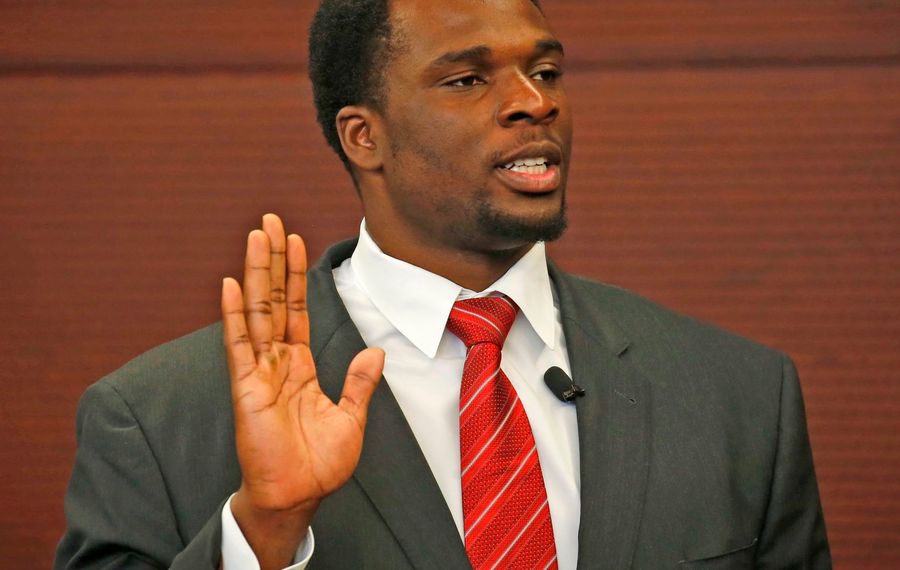 Cyrus Kouandjio understands the need to protest, to demonstrate, but kneeling during the national anthem is not his way.

As the son of immigrants who struggled in their homeland of Cameroon, he sees the anthem, and flag, too, as symbols of the freedom and liberty he came to cherish growing up here.

On Thursday, the day he and 33 others took their oath as new U.S. citizens, the Buffalo Bills lineman couldn't help thinking of his parents and what they sacrificed so their children could have a better life.

"I can't kneel during the anthem," said Kouandjio. "I don't blame Colin Kaepernick for doing what he did. But for me, I have too much respect for a flag and anthem that represent freedom and liberty."

For the Kouandjio family, the United States meant opportunity and, on this morning in a downtown Buffalo courtroom, their son spoke about why.

"My father still tells stories of running away from the violence, hiding out in the woods, his baby sister on his back," said Kouandjio. "He lived in a far different world."

He told his fellow immigrants that his 19-year journey to citizenship made him feel "blessed" to be part of a country that, in his words, has a moral center unlike any other in the world.

Yes, he sees flaws in his adopted country and understands why many African-American athletes are kneeling or sitting in protest while the national anthem is played at games.

Since the start of the season, Kaepernick, a quarterback with the San Francisco 49ers, has taken a knee during the anthem to protest racial inequality and what he sees as America's oppression of blacks.

During Thursday's naturalization ceremony, Kouandjio not only stood, he led his fellow immigrants in the Pledge of Allegiance.

And later, after taking the oath from U.S. Magistrate Judge Michael J. Roemer, he walked around the courtroom congratulating people and shaking hands.

His wife, Elizabeth, looked on and when asked about his enthusiasm for the event, said it's rooted in his family's journey here. His brother Arie, a guard for the Washington Redskins, received his citizenship about a month ago.

"His parents worked so hard and sacrificed so much," said Elizabeth.

Even before he took the podium, Kouandjio stood out in the crowd of immigrants gathering on the 8th floor of the Robert H. Jackson Courthouse.

At 6 feet, 7 inches and 322 pounds, the former Alabama all-American attracts attention almost everywhere he goes and Thursday was no exception. And yet, on this day, he shared the stage with people from Syria, China and dozens of other countries.

Roemer, who doubled as master of ceremonies, introduced Kouandjio to the crowded courtroom and, at one point, offered the former Crimson Tide standout a proper welcome.

Now 23, the Bill's tackle is not shy about mentioning the opportunities he had as a young man in the U.S. and how they provided him with a wonderful life.

He's looking forward to voting in the 2020 presidential election and admits to being less than pleased with the election of Donald Trump. And yet, he accepts him as his next president.

"I believe everything happens for a reason," said Kouandjio. 'That's part of my faith."

Drafted in the second round of the 2014 draft, Kouandjio was seen as an offensive lineman with the physical tools to succeed in the NFL.

He rarely played as a rookie but, over the past two years, started a few games as tackle.