The trophies and scars Leah Manth has collected during her lifetime aren’t just rewards for participating in sports.

They are proof that the 16-year-old North Tonawanda student-athlete and avid hunter lives life to the fullest, even though her body continues to be ravaged by a medical condition that has no known cure.

According to the Mayo Clinic, the condition is a genetic disorder that causes tumors to form anywhere in the afflicted person’s nervous system – including the brain and spinal cord. Tumors are usually noncancerous (benign), but sometimes can become cancerous (malignant). Other complications include hearing loss, learning impairment, heart and blood vessel (cardiovascular) problems, loss of vision and severe pain.

Manth’s tumors have been benign, but the removal of one of them has left her deaf in her right ear.

She is preparing for the day when she won’t be able to hear at all because she also has a slow-growing tumor in her left ear. The hearing loss has resulted in balance issues, which can be problematic for a cross country runner or a hunter negotiating uneven terrain in the woods.

“She doesn’t let anything get her down,” her father, John, said. “She seems to be accepting of it which I don’t know how she does at her age. … She knows it could lead to things. She hopes it doesn’t but she accepts it and moves on.”

“I know my way around the hospital really well,” says Leah Manth, who was diagnosed with neurofibromatosis nearly 10 years ago.

Every six months, Manth needs to get an MRI to keep track of the growth of existing tumors. The tests help doctors she visits locally, along with those in Los Angeles and Boston also determine the location of potential new ones. Manth receives chemotherapy once every two weeks to assist in managing the illness.

She’s had 12 major surgeries and eight minor ones. She’s had spinal fusion surgery following the removal of a tumor.

That surgery means Manth – a huge fan of all sports, including football – is only cleared for non-contact activities like running because an accidental collision could result in a severe injury or paralysis.

That’s better than being just a spectator, as she credits running for helping her manage her condition.

“It helps me stay in shape, balance-wise,” the 5-foot-5, 95-pound Manth said. “The tumors destroyed my balance nerves.”

John Manth said being physically fit aids in Leah’s rapid recovery from all those surgical procedures. There’s also a mental benefit to being a competitive runner. 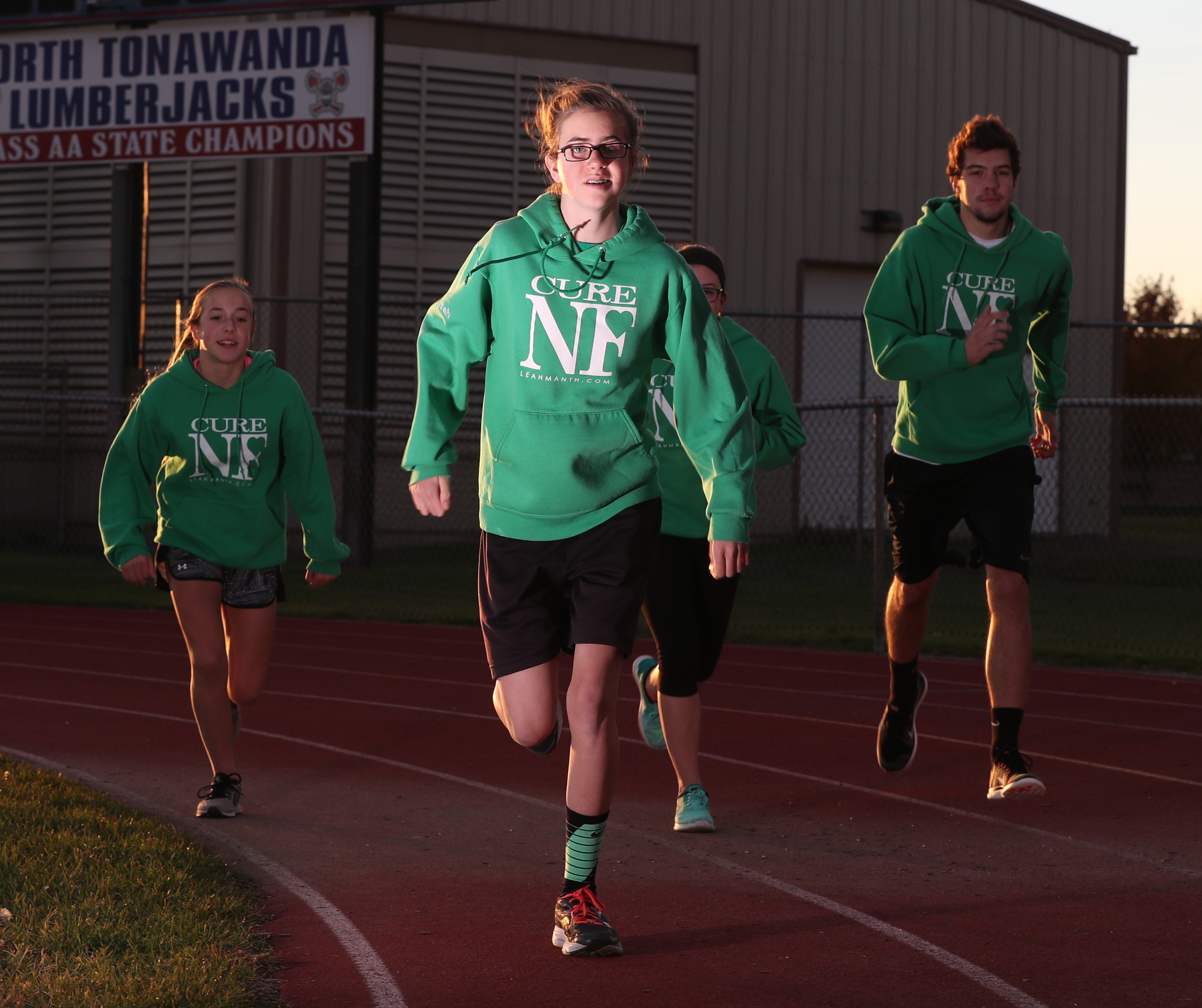 Leah Manth remains active in cross country and track and field as well as hunting despite challenges due to her disease. (James P. McCoy/Buffalo News)

“This is one of the things she can do that lets her be a normal high school kid,” John Manth said. Being with teammates and friends “is her support system.”

That support system, which includes her mother Linda and older siblings Christopher and Erin, has helped her deal with the condition since being diagnosed with it at age 7.

So too has Leah’s fighting spirit.

“She’s by far the toughest kid on the team,” North Tonawanda coach Sean Kibrick said. “She always keeps a positive attitude. The kids love her.”

Out of left field

When a lesion formed on Manth’s chest as a 7-year-old, her pediatrician recommended cosmetic surgery to have it removed. After the procedure, the tissue was sent to a pathologist for examination as a precaution. Tests indicated Type 2 neurofibromatosis in the cells of the removed skin.

An MRI later confirmed she had two more tumors growing in her brain and one more in her cervical spine.

“If we hadn’t had that done (cosmetic surgery), we probably wouldn’t have found out until she started having hearing or balance deficits,” John Manth said.

One in 25,000 people develop Type 2 NF. Half of them contract it via genetic disorder.

Manth’s condition caught those closest to her off-guard because her case is considered spontaneous. She’s the first in the family to develop NF.

“You Google it and read about it and realize oh gosh 90 percent of the people with this condition go deaf,” he continued. “You read that stuff and you’re like holy cow. She has something very rare and no cure.

“Our initial thought: No cure is not an option for us.”

The family has conducted fundraisers the past 10 years, donating $400,000 to NF research. John and Linda Manth have been active in the neurofibromatosis community and with lobbying Congress for research funds. A hopeful sign: A new chemo treatment has been discovered in Boston since they’ve join the fight to find a cure for neurofibromatosis.

“They’re getting far in science, but it’s just hard not to have a cure yet,” Leah said. “To see more and more people go through what I go through, it’s not easy.”

“No matter how bad we think we have it, someone always has it worse,” Leah said. “I see what other people go through. They’re in wheelchairs. Some of them can’t talk or can’t eat by themselves. I’m just lucky I can walk, run, eat and be independent.”

Running and walking have been a little challenging since her most recent surgery back in August.

She had a tumor developing on the nerve that carries hearing and balance information to the brain removed in her right ear. The procedure left her deaf. The balance issues have been an adjustment as she has to be careful when running or walking. 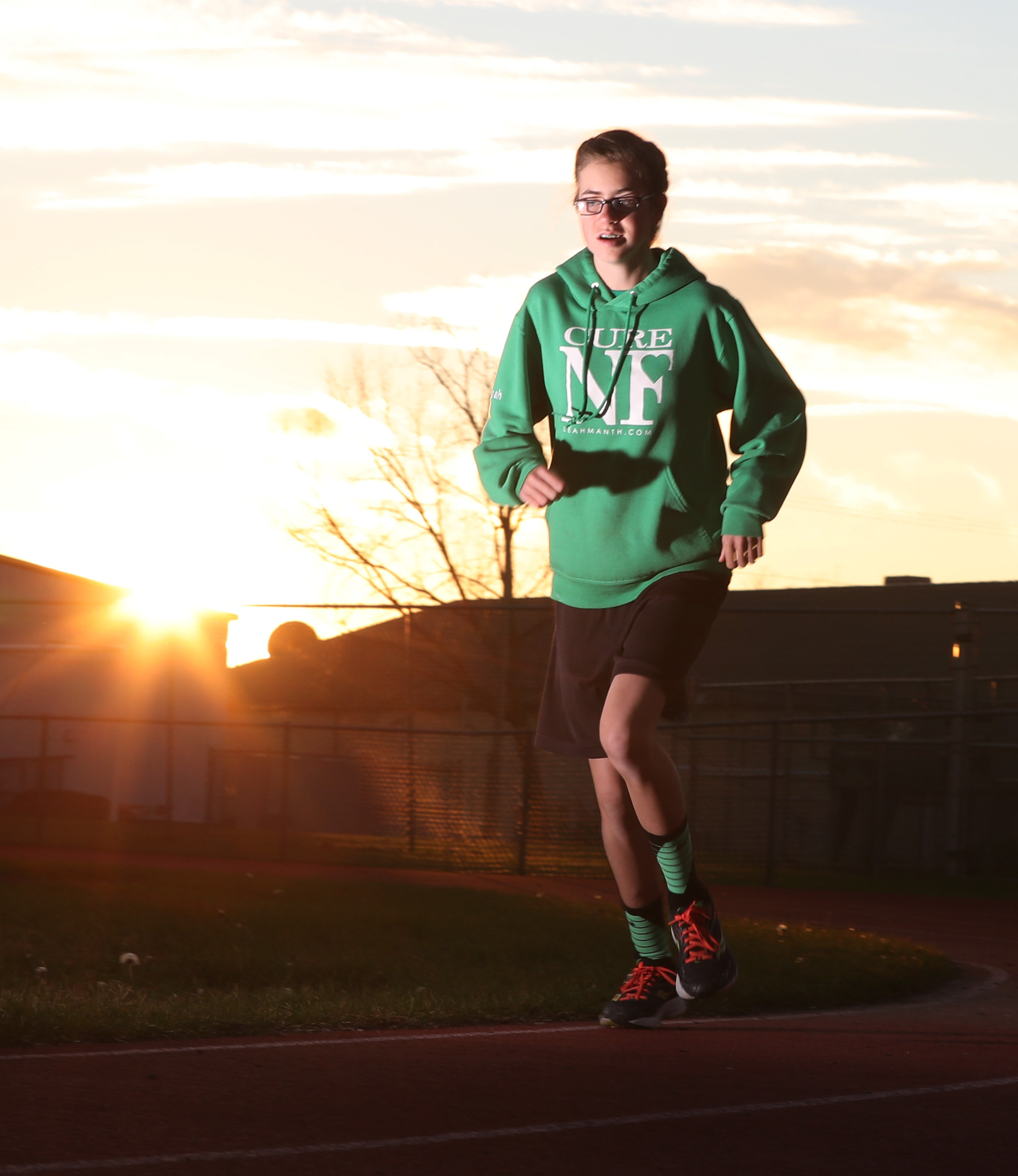 “On uneven surfaces and at night I trip a lot,” she said. “That’s what makes cross country difficult. … But doctors say running actually helps me as much as it can so I really want to keep going.”

She scored a victory by returning for the Lady Jacks’ final three cross country meets. While Manth’s times didn’t come close to those she put up last season, the fact she returned to competitive racing two months after a major surgery is remarkable.

“She regularly will have chemo treatments or procedures and then she’s at practice or meets without complaining,” Kibrick said. “She continues to work as hard as she’s ever worked. She continues to try as best as she can.”

Like any competitor, she wants to perform well in crunch time.

“It’s pretty frustrating to see the people you’ve been running with just run away from you,” she said. “You just want to get back up there because you know you can do better.”

In school, teachers know her condition and have done their best to help the honors student with a 95 average continue to develop her sharp mind.

“I’m pretty lucky,” Manth said. “My teachers since grade school have been really understanding. We talk to them and mom sends them emails. We talked to them at the beginning of the year. They put me on the right side of the room so that I’m facing them. When we’re watching videos they’ll ask me if it’s loud enough. … I’m lucky.”

So, how does Manth negotiate the outdoor terrain while hunting?

She uses two walking sticks to maintain balance. She has a shoulder strap attached to her rifle so that she can carry it.

While the ear may be vital for balance, it hasn’t affected her shooting skills. She can hit a target from 300 yards away.

Since reaching the legal age to hunt more than four years ago, Manth has harvested three deer, one black bear, one caribou and one antelope. The trophies hang on a wall in the family’s home.

The bear and caribou came on a trip to Quebec three years ago set up through the nonprofit group called Hunt of a Lifetime. The organization’s mission statement is to turn the hunting and fishing dreams of children diagnosed with life-threatening illnesses into reality.

Leah also enjoys fishing and hunting turkey in the spring.

“Here she is, she has balance issues and she’s out there with walking sticks,” John Manth said.

Hope for the future

While Leah is determined to live her life, she’s still preparing for the inevitable. 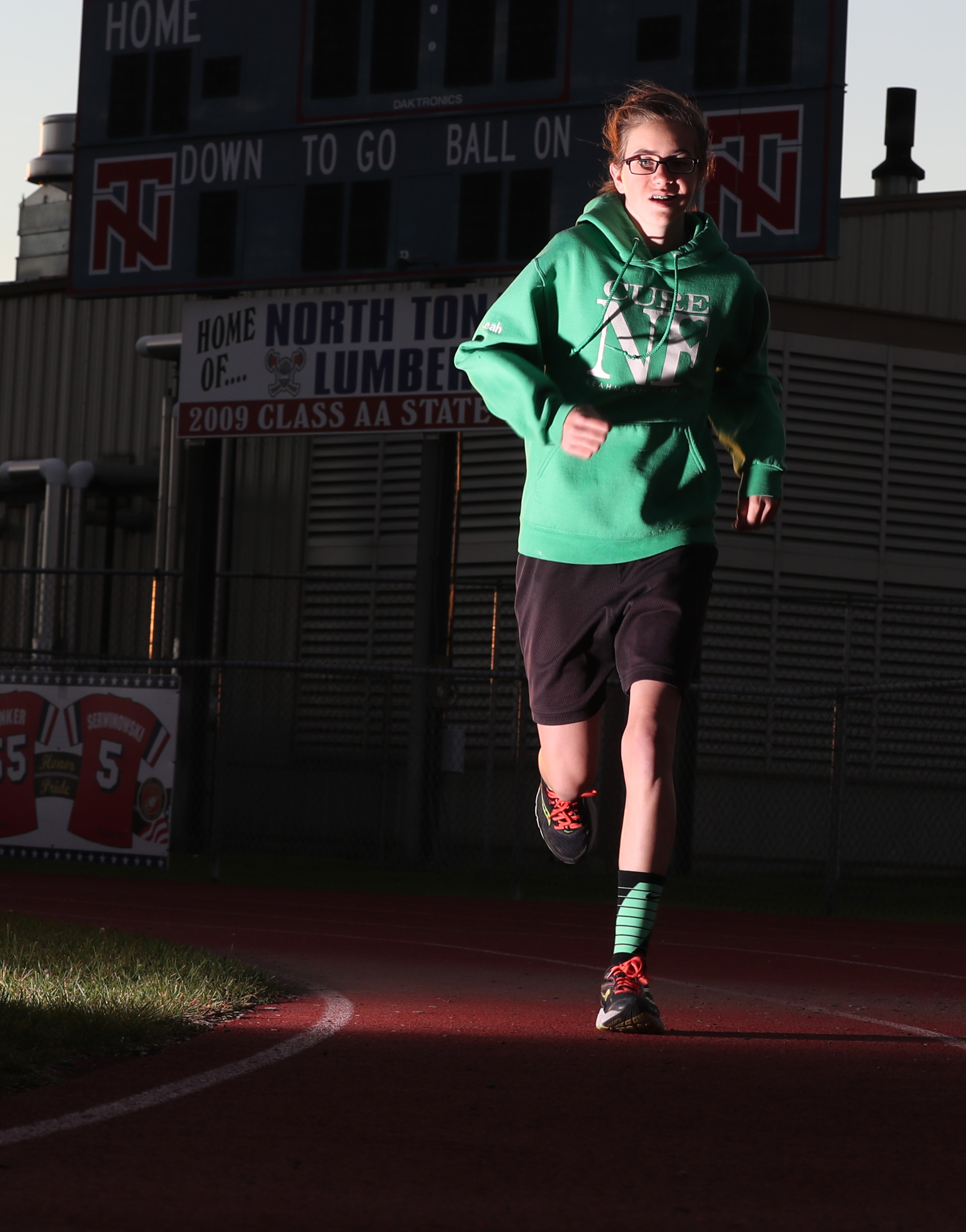 She will go deaf, so she is learning how to read lips and studying sign language.

On Nov. 8, her physicians in Los Angeles completed the surgical procedure started in August by activating an implanted auditory brain stem.

The small device, held in place near her right ear by magnets doesn’t enable her to hear words. But it allows her to have sound recognition, which is important because she now can detect if someone is talking to her when she’s not looking.

She got a chuckle when a teammate said the device resembled part of Iron Man’s armor.

Manth will need another surgery down the road to remove a slow-growing tumor in her airway.

It’s not affecting her ability to run, though, as she prepares for indoor track. The distance/mid-distance runner is determined to meet her own standards of excellence as a competitor. North Tonawanda’s first meet is in early December.

While some success would definitely quench her competitive thirst, the ultimate happy ending goes a little something like this.

Manth maintains her independence long into adulthood, fulfilling her dream of becoming a doctor. She shares her winning attitude and spirit with those who need moral support in their battle.

As she runs toward an unknown future only one thing is certain: She won’t stop living. It’s not her nature.

“She looks weak and frail but that’s not true,” John Manth said. “She’s a tough kid. She’s been through hell and back and she always has her head held high and she’s always smiling. … She’s very courageous.”