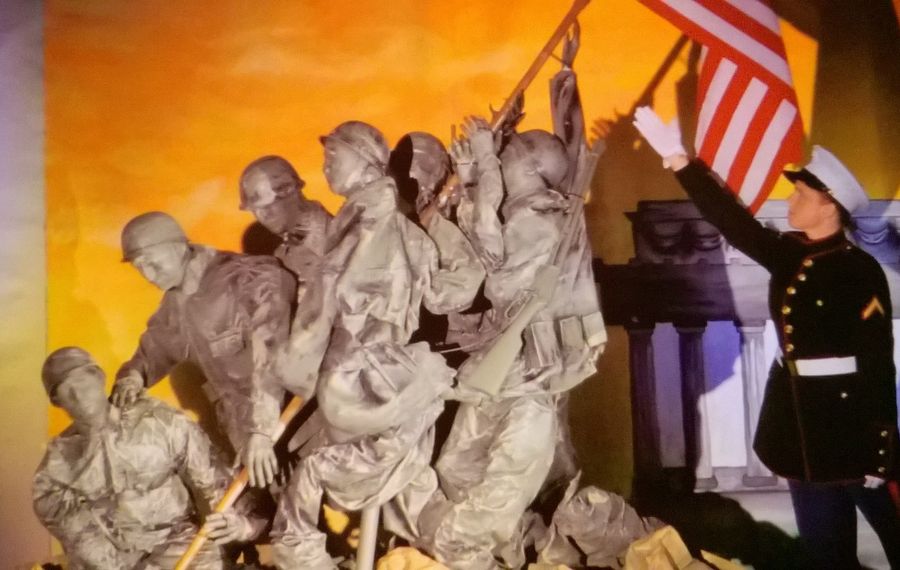 More than 400 guests are expected to see a unique display of patriotism at a special event Sunday, Nov. 13 at the Barker Fire Department’s recreation hall at 1660 Quaker Road.

A handcrafted, life-sized replica of the U.S. Marine Corps War Memorial, a national monument in Arlington, Va., complete with a panoramic backdrop of Washington, D.C., will be on display at this year at Somerset’s annual tribute dinner.

Teacher Heather Pedini designed it for the Royalton-Hartland Elementary School’s Pre-K through Grade 4 students for Flag Day this past June 14. It replicates the monument, which was inspired by a photo of six Marines raising the U.S. flag atop Mount Suribachi during the Battle of Iwo Jima during World War II.

Barker Fire Department President Wally Coates, who has chaired the veterans dinner for the past decade, said Roger Klatt, superintendent of both Barker and Roy-Hart School Districts, told him about the piece. “It’s huge and beautiful,” Coates said, adding that he invited Pedini to showcase her work at the tribute dinner. 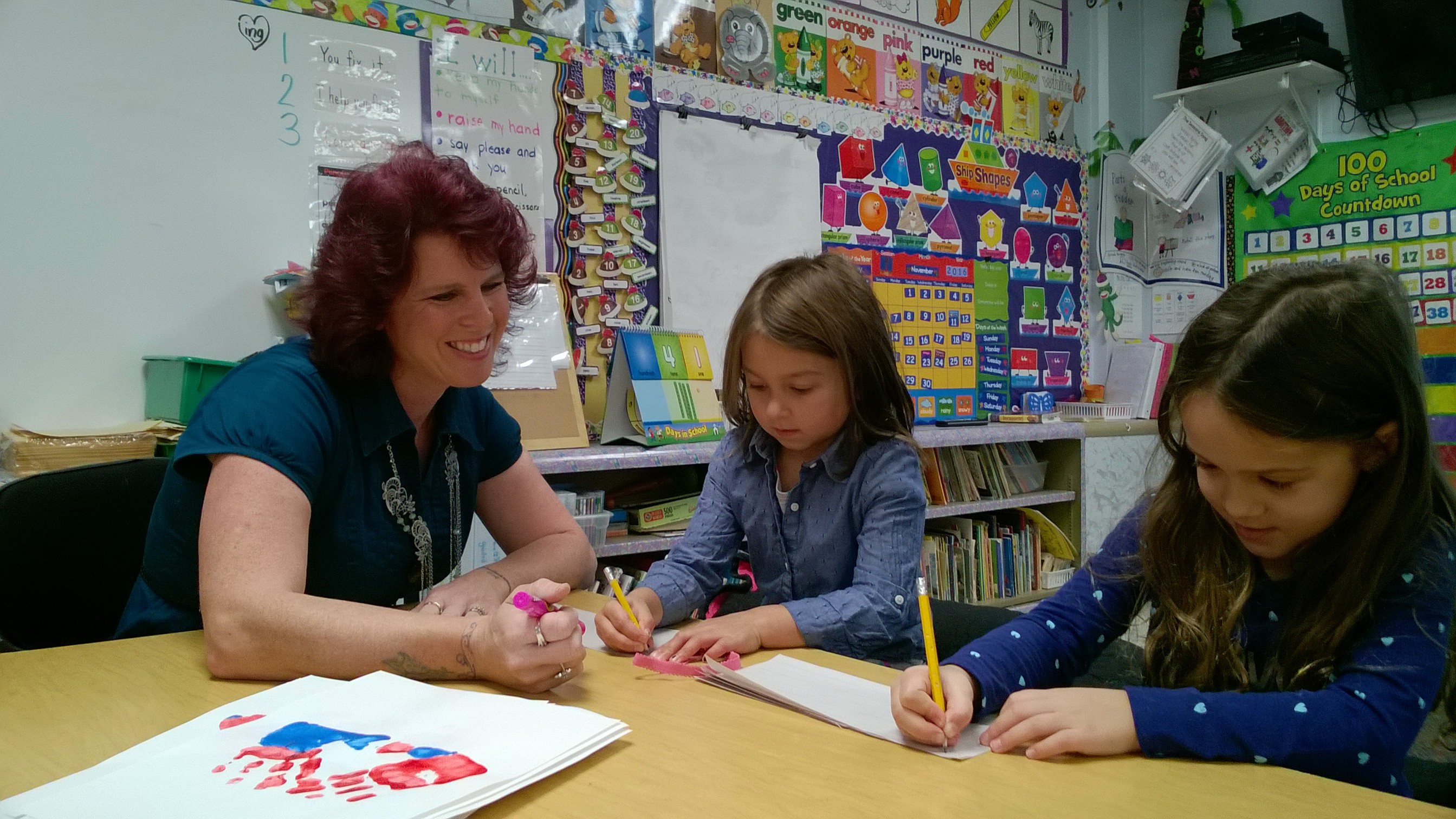 Coates said he expects between 125 and 150 veterans at today’s dinner, with at least a couple of WWII vets in attendance.

“We really appreciate what our veterans did for our country and we want to make sure they know it,” Coates said. “It’s nice to be able to do this.”

The recreation hall’s doors open at 4:30 p.m. and the program begins at 5 p.m., with a free buffet dinner for veterans and active military personnel. Most guests have reservations, but a limited amount of tickets may still be available at the door for $10 for the general public, with kids 12 and under free.

The students learn a lesson in patriotism first-hand by volunteering at the event, a lesson Pedini, a kindergarten teacher, tries to convey each June at her own Roy-Hart school.

In past years, Pedini has sculpted the presidential busts of Mount Rushmore with moveable mouths so that the “presidents” could talk to the students; built a lunar module and dressed like Neil Armstrong to plant the American flag on the moon; and learned how to play snare drum to march as a costumed soldier in the War of 1812 -- just to name a few of her productions.

This past June, Pedini unveiled her replica monument, complete with 10-by-33 painted scene of the Lincoln Memorial, Washington Monument and Capitol building. She and her husband, Shane, brought it out of storage and installed at the recreation hall.

“This is a very emotional thing for me,” said Pedini. “My grandfather, James Simmons, was with the U.S. Army and was a prisoner of war in France during World War II. He was missing in action, and then a POW. He told us that when he came home, the most beautiful thing he had ever seen was when he stepped off the plane and saw the American flag. That has stayed with me.”

Pedini said this Spring’s event was particularly poignant because her grandmother, Catherine Simmons, was eager to attend the June 14 event at school -- as she had for countless years. But the widow of James Simmons passed away on May 27, her 90th birthday.

“My grandmother was a big patriot and wore a flag pin every day,” she recalled. “This was always instilled in us.”

Pedini always invites area veterans to her June school productions as a way of honoring them.

“Some of our fourth-grade students walk our veterans in, carrying 13 flags for the original 13 colonies,” she explained.

Pedini recently took some time to talk about her patriotic projects and why they mean so much to her -- and the countless children and veterans who have appreciated them over the years.

How did this project for school start?

I saw a need to use my gifts more. I wanted to create something that was interesting, visually, instead of just having speakers speaking at the children about the flag. With these things I make, the students can come up and walk around them later. It’s more visual and I think that makes it more memorable.

How do you make these?

Just about everything I make is recycled. If someone is throwing something out, I’ll take it and think I might be able to make something out of it. I sew my own outfits for this, too, and I never do the same thing twice, so I have a whole slew of costumes.

I made the armature out of pvc for Iwo Jima, and used chicken wire and recycled clothing and Styrofoam heads. I even used real boots.

I think about people as I’m working. It keeps you busy. I think about my grandfather and grandmother. I think about the other service people I know. I couldn’t do what they do, so I became a teacher. I wanted to be a Marine like my older brother, Richard. I have a picture of my great-grandfather in his Army uniform. My husband’s father was a Marine and we have his flag.

This is a labor of love. When I get an idea, I do a lot of planning, researching, get a lot of books, look at Pinterest and then put together what I’ll need for my next project and write the script.

Do you do this on your own?

We have a committee. Our music teacher, Kathy Pease, does all of the music and we have someone who buys the flags for the kids and someone who does the invitations, for example, so I can do my part. Years ago, I also wrote age-appropriate booklets about the flag for Pre-K through Grade 4 and we still use them at school. My principal, Donna VanSlyke, is very supportive. 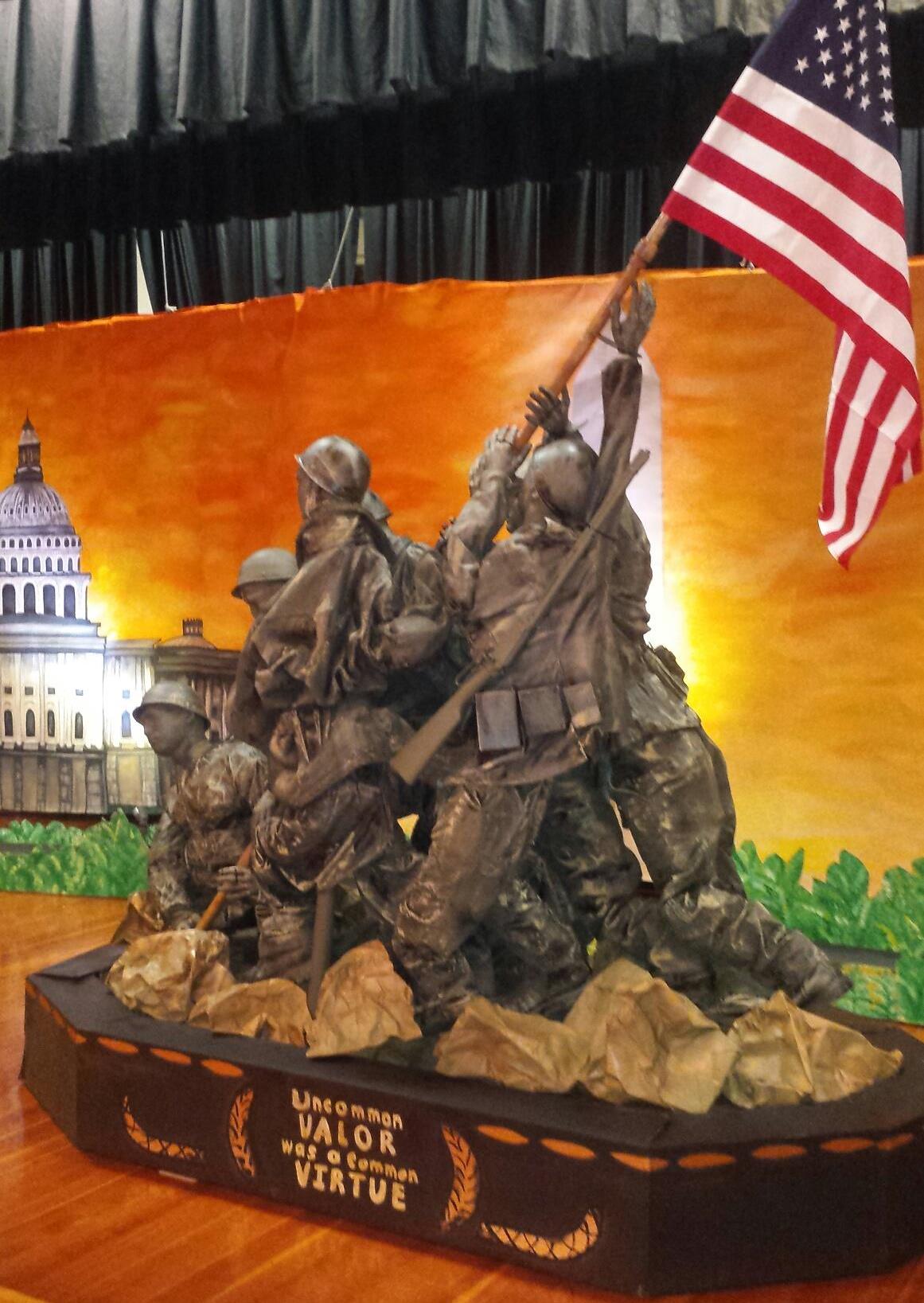 Royalton-Hartland Elementary School teacher Heather Pedini created this replica of the U.S. Marine Corps Memorial, a monument in Arlington, Va. Washington D.C. She will display it at the Barker Fire Department's annual dinner for veterans on Nov. 13, 2016. (Provided photo)

How long have you been teaching?

This is my 21st year, and I’ve taught all different grades.

What do the kids think about these projects?

My favorite thing is to see every single kid in our school with a flag in the audience. Some of them have flag hats on, too. My kindergarteners wear special flag shirts we make. I think the kids see this is part of our flag’s history and part of our history. Even if they’re too young to understand all of it, they still get the gist of the importance of it.

I get a lot out of this and I know the kids do, too. To see the veterans there with the kids is a nice feeling, too, and some of the veterans start crying.

I understand the school displays quite a few flags on Flag Day. Can you tell us about some of them?

All of the flags used on Flag Day are mine. I own about 50 American flags or military service flags. I have a POW flag, a 9/11 flag, a 3-percenter flag…

It stems from the Revolutionary War, when only 3 percent of the Colonists fought against the King of England and won our freedom. It’s a Betsy Ross flag, with the 3 percent sign in the middle of it.

In what other ways do you show your patriotism?

I have a flag tattooed on my shoulder in memory of those who died on Sept. 11, and I have a tattoo on my wrist that says “1776” and the words “E pluribus unum” (“out of many, one,” the motto on the U.S. seal). My students know what this means. If they don’t learn the importance of this now, when are they going to learn it?