Jimmie D. Ferguson gasped for air as the cockpit of his AH-1 Cobra attack helicopter quickly filled with water.

It was Jan. 19, 1972, and the Army warrant officer one had been shot down outside the Phu Bai airport in Vietnam, violently landing upside down in a rice paddy filled with three feet of water.

“That was a time in my life when I had lost all control of myself and the aircraft I was in,” said Ferguson. “For a helicopter pilot, that’s the nightmare you relive over and over again.”

He and the aircraft’s commander, Capt. Michael E. Neufeld, escaped bruised and battered but mostly unscathed.

The helicopter – tail number 67-15690 – was retrieved, repaired and flew for decades more before ending up in storage at the former Bell Aircraft Plant in Wheatfield.

Now, 44 years later, the aircraft has followed a long and winding path from that rice paddy to become the centerpiece of a new Vietnam veterans memorial in the City of Tonawanda, where a dedication is planned for Nov. 12, the day after Veterans Day.

U.S. troops were being withdrawn from Vietnam. The war wasn’t going well for the U.S. and the tide of public sentiment many years earlier had turned against the war.

Neufeld was 25, on his third tour. Ferguson was 21 years old. 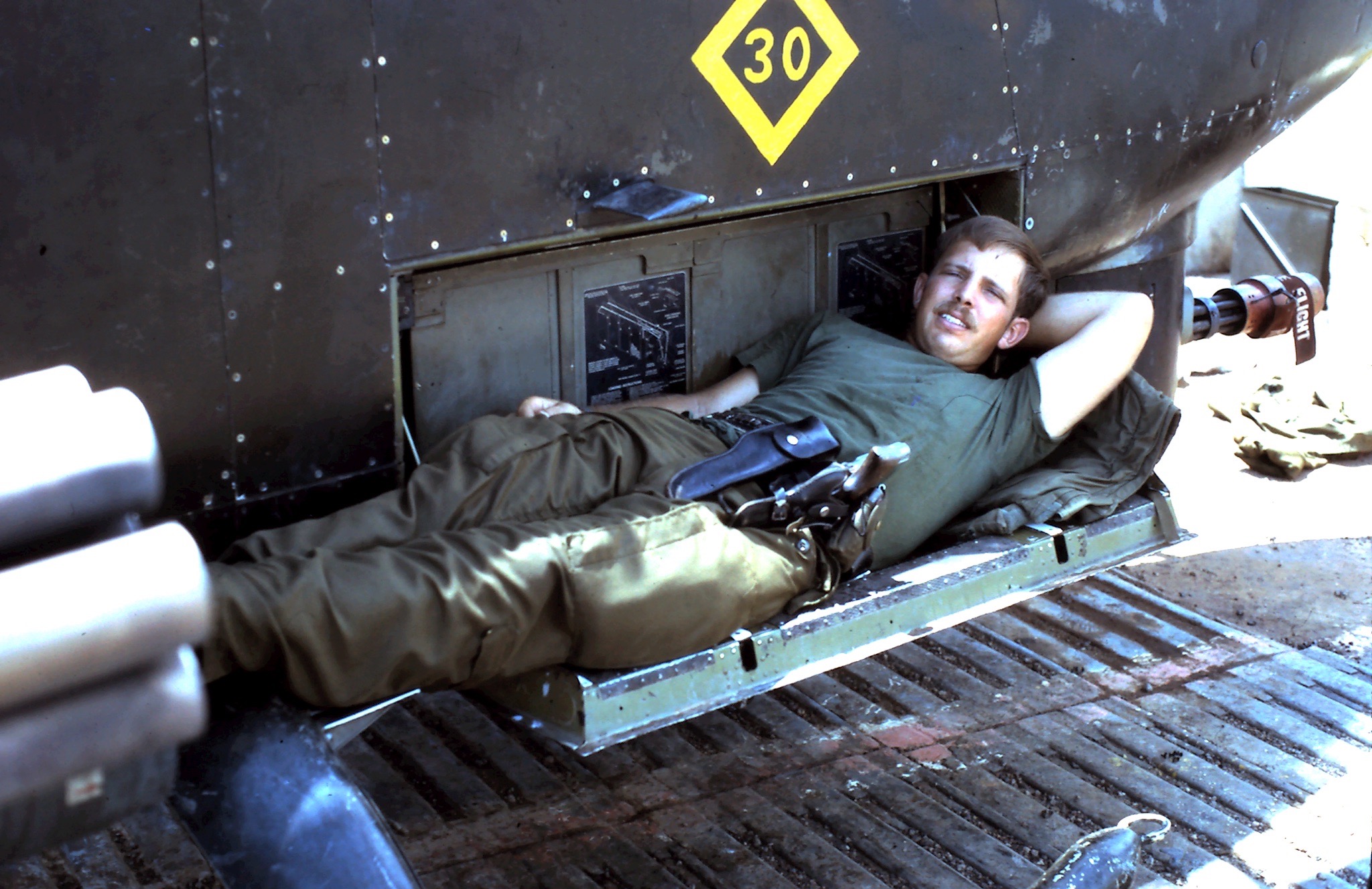 He had enlisted in the Army in 1970 and wanted to fly helicopters. He had flown fixed-wing planes before, but didn’t have a pilot's license, and figured the military was a good way to get the training for free.

He graduated in the top 25 percent of his class at flight school in Fort Rucker, Ala., which meant he could choose the type of aircraft he wanted to fly. He chose the Cobra.

“The Cobra has always had a special place in my heart,” he said. “I flew it for almost six years and it’s a great aircraft. For the time it was built it was a great attack helicopter.”

He was sent in August 1971 to Vietnam where in December he joined the A Battery, 4th Battalion, 77th Field Artillery – a unit in the 101st Airborne.

On the fateful day Ferguson’s Cobra was to be one of four escorting five Bell Huey helicopters carrying a Green Beret unit – the 5th Special Forces - to neighboring Laos. It was a classified mission.

About five miles from their base in Phu Bai, Ferguson’s Cobra came under fire.

"We took two hits,” he said. “There was a loud pop and the aircraft just immediately went nose up and we totally lost control of the aircraft."

One round had lodged in the .40 mm drum of the Cobra’s nose-mounted turret system. But the other had penetrated one of the blades’ pitch-pull tubes.

"When it separated we lost control of that blade, which is only half the blades that control the aircraft,” Ferguson said. “So the aircraft just went berserk.”

The Cobra’s nose pitched up.

“I could feel the pressure on my back, rather than on my butt, which indicated to me it was getting ready to roll over backwards,” he said.

If the Cobra was inverted, positive lift on the blades would be lost, causing the blades to cut the tail boom off and disintegrate the aircraft.

The two pilots pushed forward on the controls with all their might and got the Cobra in a nose down position about 1,000 feet up. Then they had to worry about an uncontrollable nose-first dive.

“I figured we were gonna be a hole bored into the ground,” Ferguson said.

They pulled back with about half the effort and leveled out about 20 feet off the ground. Ferguson, seated in the front cockpit, saw a big earthen mound straight ahead and slammed on the Cobra’s right pedal, which draws power from the engine and dampens its aerodynamics.

The Cobra landed in the water, rolled and tumbled end over end.

“When we stopped, all the gyrations and motions from rolling I was just amazed that I was still alive,” Ferguson said. “I started moving my toes and my fingers just to see if I could move things.”

With the engine roaring and the cockpit filling with water, Ferguson undid his seatbelt and fell to the Cobra’s plexiglass canopy.

“I was so disoriented that I actually panicked,” Ferguson said. “I was so cool, I thought to myself, up until that point, but sheer panic started to set in.”

Neufeld, whose cockpit wasn’t underwater, used his survival knife to break the window and climb out.

Meanwhile, Ferguson was scrambling for air.

“All I could do was get my lips up in to a little hole that had some air in it to take a breath then try to get out,” he said.

Neufeld saw him struggling and struck the canopy with his knife, creating a quarter-sized crack. Ferguson shoved against it.

“My whole body come through that hole and the plexiglass all broke out around me,” Ferguson said.

Neufeld was on his second downward strike at that moment and accidentally stabbed Ferguson on his right forearm.

A Huey hovered nearby. They tried to wave it away, knowing the Cobra was loaded with fuel and weapons that could explode at any moment.

They waded in waist-deep mud and water over to the Huey, where Neufeld shoved Ferguson onboard then turned back to the Cobra.

“I said, ‘Where in the world are you going?’” Ferguson said. “He said, ‘I gotta go back and get the log book. We’ve got to log this landing!’” 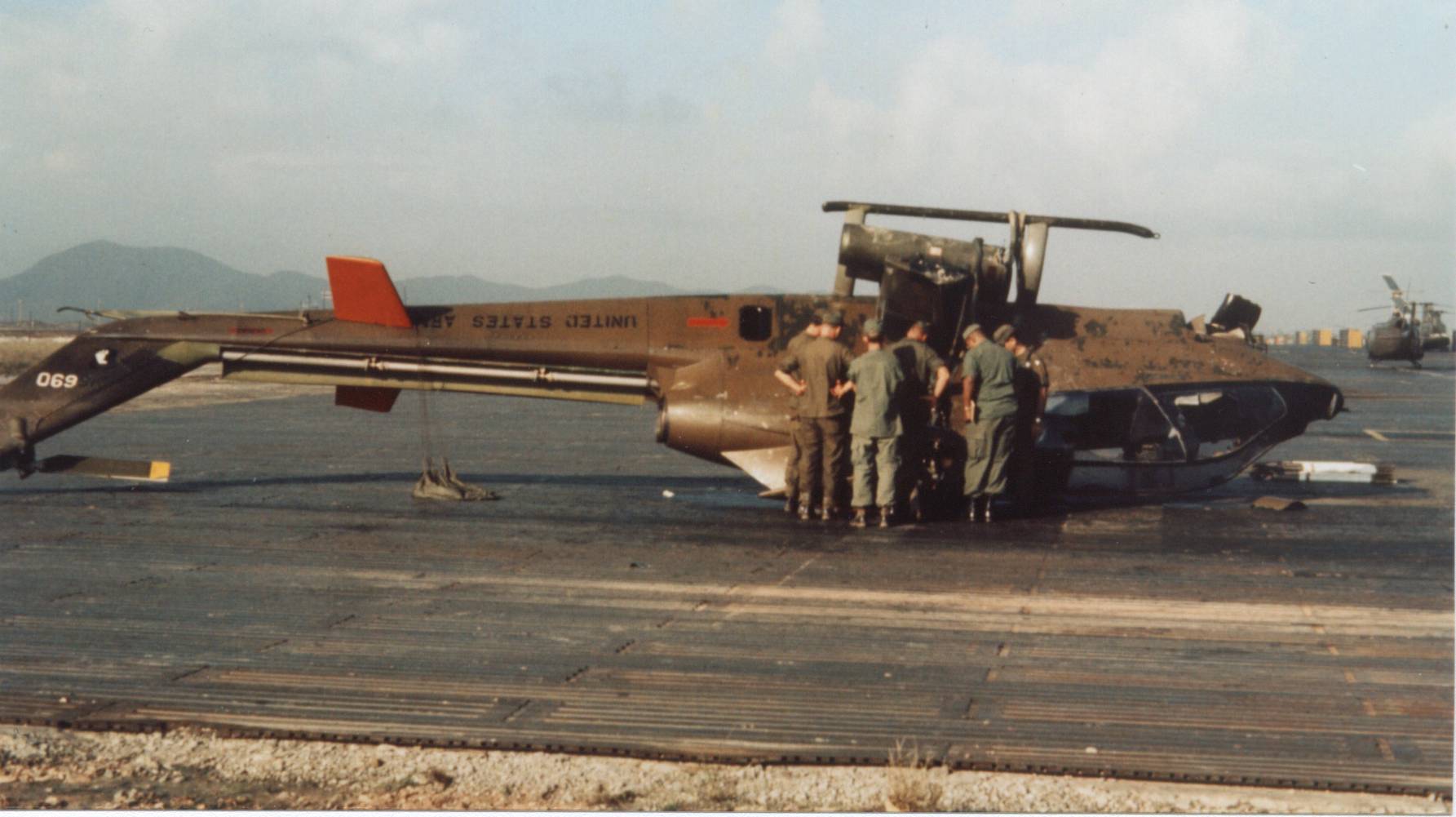 Army helicopter maintenance workers and crew chiefs remove rockets and fuel from a Cobra attack helicopter on Jan. 20, 1972, in Phu Bai, Vietnam. The helicopter, piloted by Jimmie D. Ferguson and Mike Neufeld, had been shot down a day earlier. This helicopter is set to become the centerpiece of a new Vietnam veterans memorial in the City of Tonawanda. (Photo courtesy of Jimmie D. Ferguson)

Ferguson was treated with a tetanus shot, for his cut from Neufeld’s dull, rusty knife, and for leg injuries from being jostled around and hit with the controls.

He learned Neufeld had been read his rights and was told to prepare for a court martial for destroying government property.

“They thought we were trying to do a loop or something in the Cobra and it got away from us and we crashed,” Ferguson said. “I said, ‘Fellas, we took rounds.’”

A platoon went out and retrieved the pitch-pull tube, which showed evidence of bullet holes. The investigation was closed and the crash was ruled the result of hostile fire.

A Chinook pulled the Cobra out of the rice paddy and returned it to the base.

Ferguson was sent to the 1st Cavalry Division and flew for another seven months before returning to the U.S. in August 1972. He stayed in the Army another five years, stationed at Fort Campbell on the Kentucky-Tennessee border.

Meanwhile, the Cobra was repaired. In 1972 it was assigned to a unit at Fort Lewis in Washington State and then, briefly in 1974, to Fort Campbell where Ferguson was stationed.

From the mid 1990s to the early 2000s the Cobra was flown by the Army National Guard out of Rochester, then retired and sent to Fort Drum where it was deactivated and the engine was removed.

The Army awarded it to the Bell Aerospace Museum in downtown Niagara Falls where it was displayed on the roof for several years before the museum moved and it was placed in storage, said Paul D. Faltyn, the museum’s director.

Faltyn began looking for a place to properly display it, and heard members of Chapter 77, Vietnam Veterans of America in Tonawanda were looking for a helicopter and the museum agreed to make a permanent loan for the memorial. 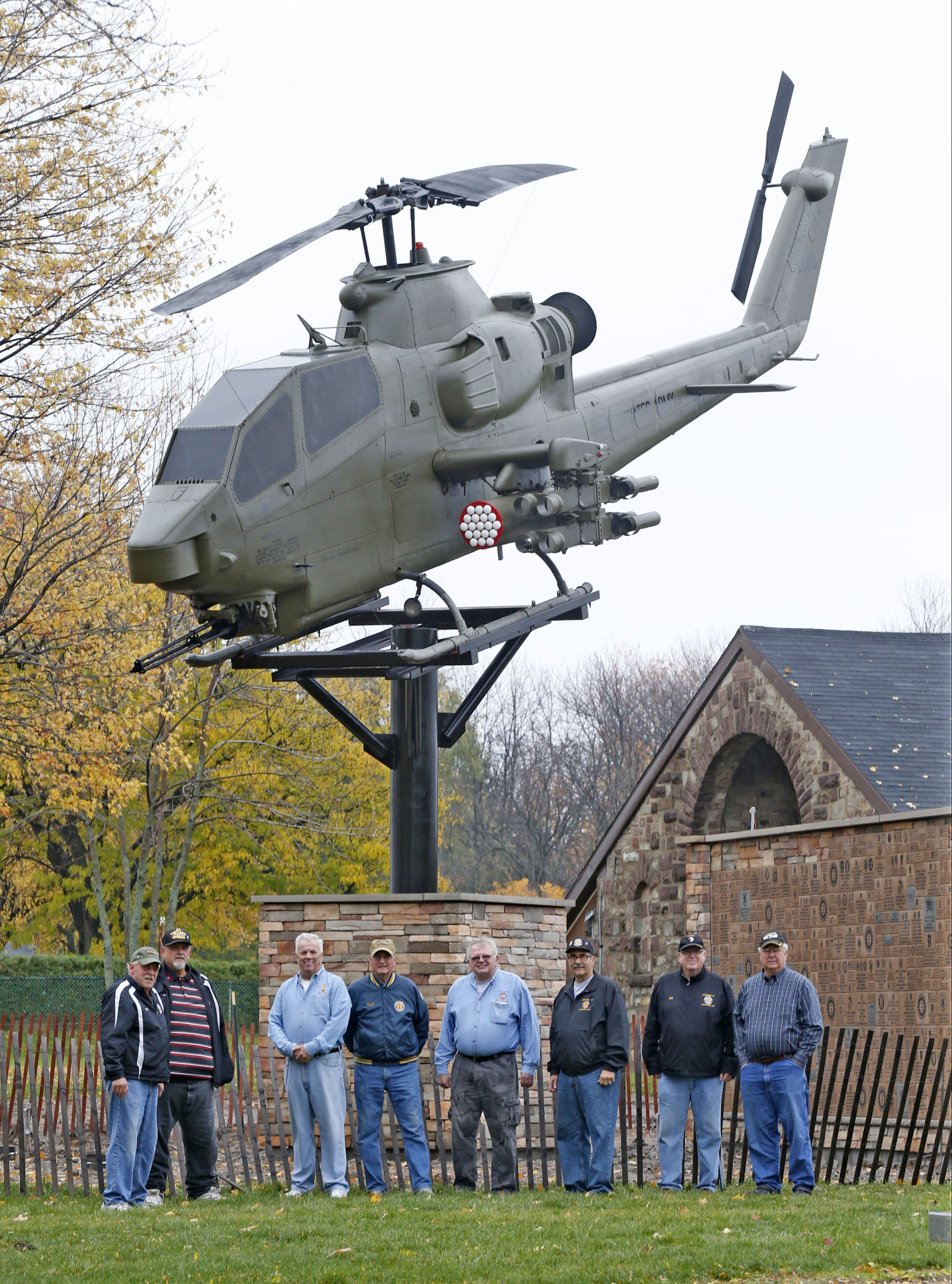 The local chapter has been working since 2006 on plans for a memorial.

After securing the Cobra, they broke ground in August on the memorial at the entrance to Veterans Park, off Niagara Street overlooking the Niagara River. Over 500 engraved bricks were sold as part of a campaign that raised nearly $100,000, said Paul Pietrowski, the chapter’s treasurer.

The bricks are installed on a wall behind the 3,900-pound helicopter, which is mounted 15 feet high on a pedestal. On the reverse side of the wall are service emblems representing each military branch. And behind the wall are POW/KIA, American and VVA flags.

Plaques on the Cobra’s pedestal will tell its history, including the events of Jan. 19, 1972.

The Cobra today looks very different than the one Ferguson remembers. He flew a G model, but it was twice taken apart and rebuilt and exists today as an F model. The rounded canopy is gone, in favor of a flattened canopy that’s harder for heat-seeking missiles to track.

About one-third of the aircraft, including the airframe and its engraved data plate, are original, Ferguson estimates.

“As long as you have the same data plate, it’s the same aircraft, as far as the military is concerned,” Ferguson said.

Several years ago he visited a new Vietnam veterans memorial in Bull Shoals, Ark. similar to the one in Tonawanda. The Arkansas memorial displays the helicopter Ferguson's roommate in Vietnam, Capt. Arnold John Rahm, was shot down and killed in.

That got him wondering if 67-15690 was still around. Some Google searches revealed it was in storage at the Bell Aerospace Museum, but he didn’t know about the plan to use it for the memorial until contacted by a reporter.

“I’m thrilled to death that the aircraft is still around giving enjoyment to people and reminding people there’s many of our soldiers who are risking their lives to keep them all free," he said. 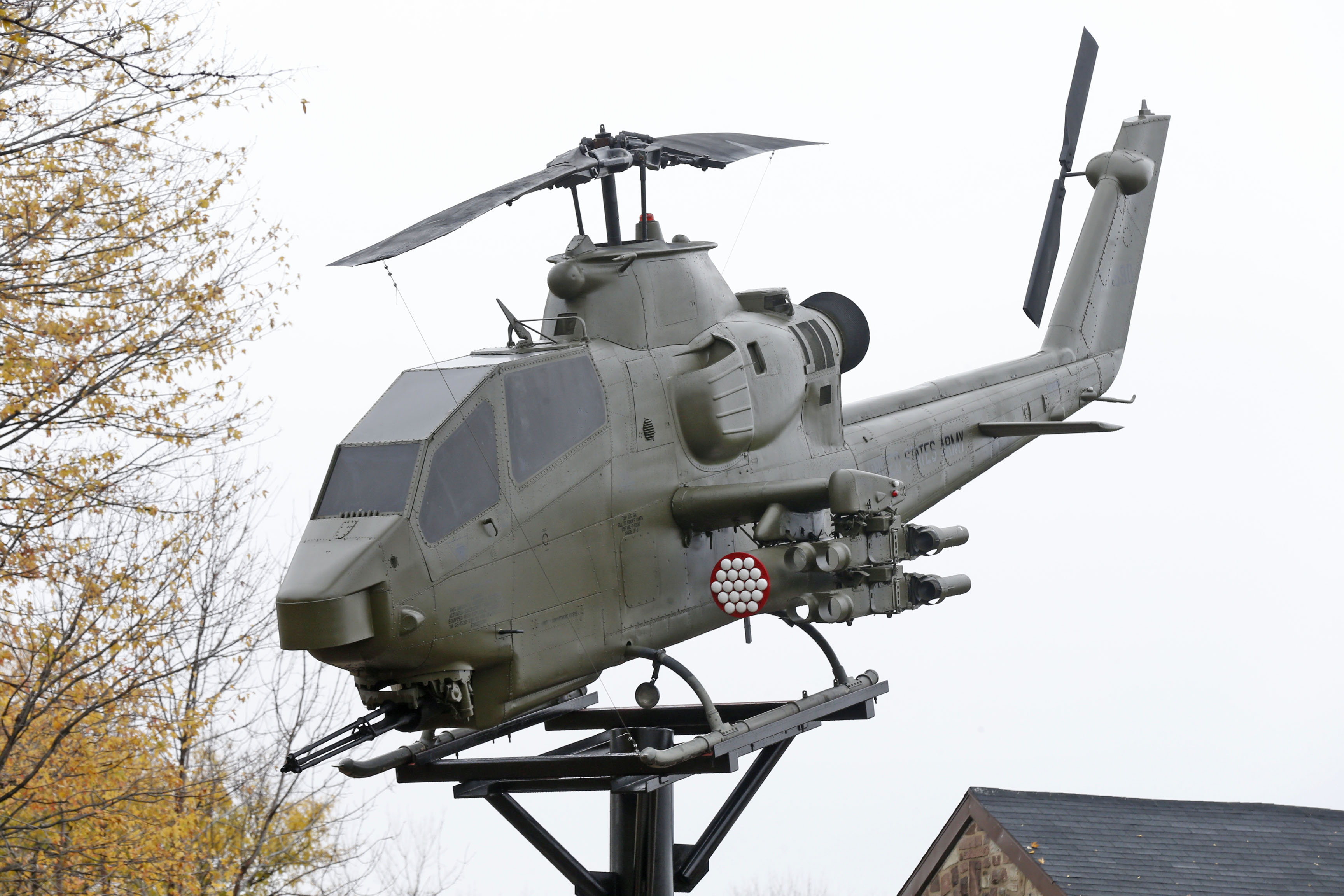 The Cobra attack helicopter was placed in late October on a pedestal in Veterans Park in the City of Tonawanda. (Robert Kirkham/Buffalo News)

Now 66 years old and living in Bowling Green, Ky., Ferguson retired in 2010 after 34 years as an air traffic controller. He struggles with diabetes and uses two canes to get around.

“I’m not in very good health,” he said during a phone interview.

But he and his wife of 45 years, Jean, delight in their three children -- a son and two daughters -- and seven grandchildren.

Ferguson and his co-pilot Neufeld never reconnected, although Ferguson had tried to track him down in recent years.

“When I finally did find him, he had passed away,” he said.

Neufeld died in 2011 at age 64 in Kansas from the effects of Agent Orange exposure, said his sister, Mary Neufeld. She remembered her brother as "brave, smart and a good pilot."

Ferguson credits Neufeld for not only saving his life that day in 1972, but also for his long career with the Federal Aviation Administration.

Neufeld had insisted to a doctor that Ferguson receive a Purple Heart for the stitches he received for the knife wound. As a Purple Heart recipient, Ferguson was entitled to 10 extra points in his job application to the FAA and that put him over the top.

He plans to travel here to see the new memorial in Tonawanda, though likely not for the dedication. But when he gazes upon the brightly lit Cobra, Ferguson said he’s

likely to have many of the same vivid recollections of that day in 1972 that have remained with him since. 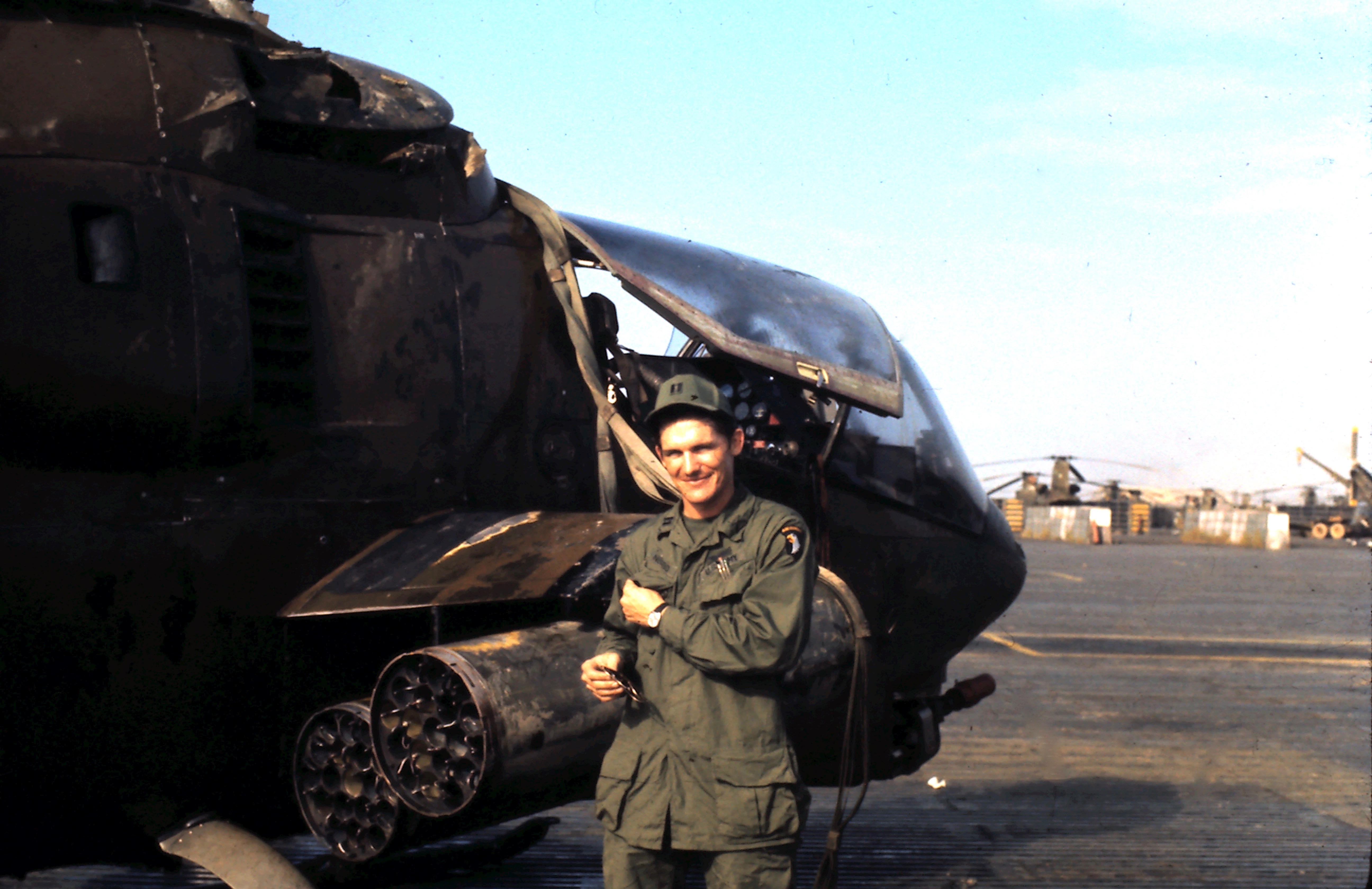 Capt. Michael E. Neufeld stands in front of a Cobra attack helicopter on Jan. 20, 1972, at an Army base in Phu Bai, Vietnam. A day earlier, Neufeld was shot down while flying the helicopter and survived. The helicopter is the centerpiece of a new Vietnam veterans memorial in Tonawanda. (Photo courtesy of Jimmie D. Ferguson)