For more than two decades, Earl Ketry has been defying the odds, and even his own advice, in his personal bid to restore some of his city's luster.

Starting with his first investment in the floundering Pearl Street Grill & Brewery in 1997, the beer-loving and sports-minded entrepreneur has gradually built a retail and entertainment empire in underappreciated parts of downtown Buffalo.

From a single-floor restaurant in a once seedy part of the city, he expanded Pearl Street into one of downtown's best-known eateries, with its three floors of dining, banquet rooms and bars. He added a downstairs deli, and then developed a boutique hotel in the adjacent Webb Building. He teamed up with prominent downtown developer Rocco Termini to run the Hotel @ the Lafayette and its Pan American Grill & Brewery.

And while it took him 15 years, Ketry has finally achieved his long-standing desire of being a player on Buffalo’s waterfront, turning a derelict and largely demolished former industrial property along the Buffalo River into the burgeoning RiverWorks sports and entertainment complex. In the process, he's lured the city's roller-derby league, other amateur sports, hordes of fans and even more restaurant and bar patrons to a strip of waterfront that is undergoing a broader transformation into Buffalo's newest destination.

"I’ve been in love with the Buffalo River since before it was cool," Ketry said, sporting corduroys and a pale linen shirt while perched on a bar stool and sipping beer at RiverWorks. "It’s been on my intellectual radar screen for well over 10 years, and I was trying to see where I was able to do something." 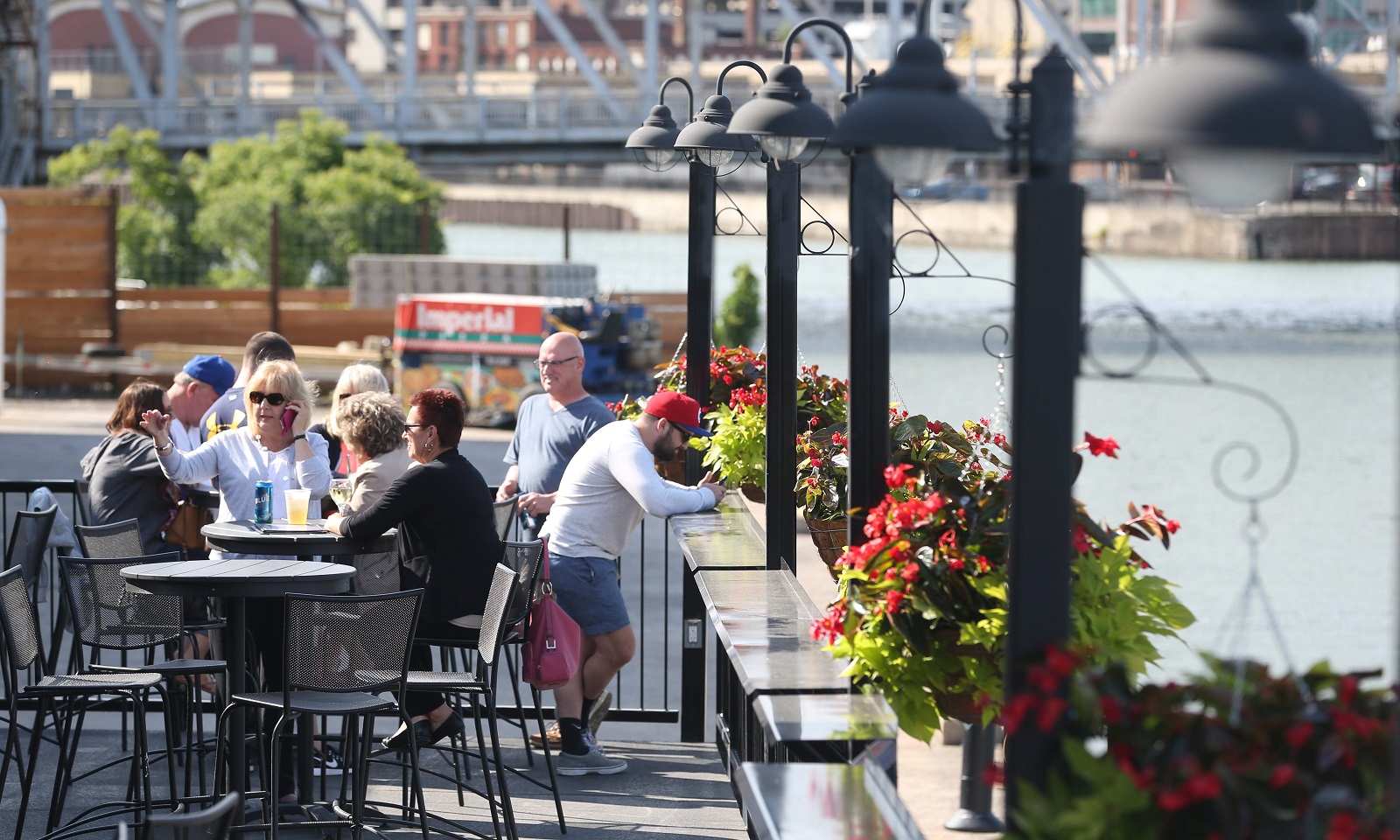 RiverWorks, at 359 Ganson Ave., has a large patio as well as courts for people to play pickle ball every Tuesday and Thursday and when the area is open on Saturdays and Sundays. (Sharon Cantillon/Buffalo News)

His businesses now serve everything from fine dining steaks to pub burgers. And he's made millions of dollars that he's plowed back into his investments.

"Earl is a very modest individual. He’s a background guy. He doesn’t starve for the spotlight," said Sean Green, RiverWorks' director of athletics and corporate sponsorship. "But if you look at what Earl’s done here, he took a bankrupt brewpub and turned it into an empire."

But he is not done. Rather, he’s looking to the future, seeking to unite his properties while also bringing new entertainment features that he hopes will attract more out-of-state visitors to his hometown. Among his big plans:

"We’re constantly envisioning the next twist, the next turn," said the 69-year-old Ketry.

Ketry, while not youthful, is part of the new generation of private-sector leaders who are trying to reimagine a new city rising from the historic and industrial remnants of what he calls old "boomtown" Buffalo. It's a challenge that has stymied the city's best and brightest for decades, but which is starting to bear fruit in recent years.

The crux behind Ketry's philosophy is building business around a "four-day weekend."

That is, rather than just capture local patronage, he wants to capitalize on existing regional resources and build new attractions that will lure visitors from out of town, and even out of state. And he's betting that they will stay for several days and spread their spending around - including at his businesses. 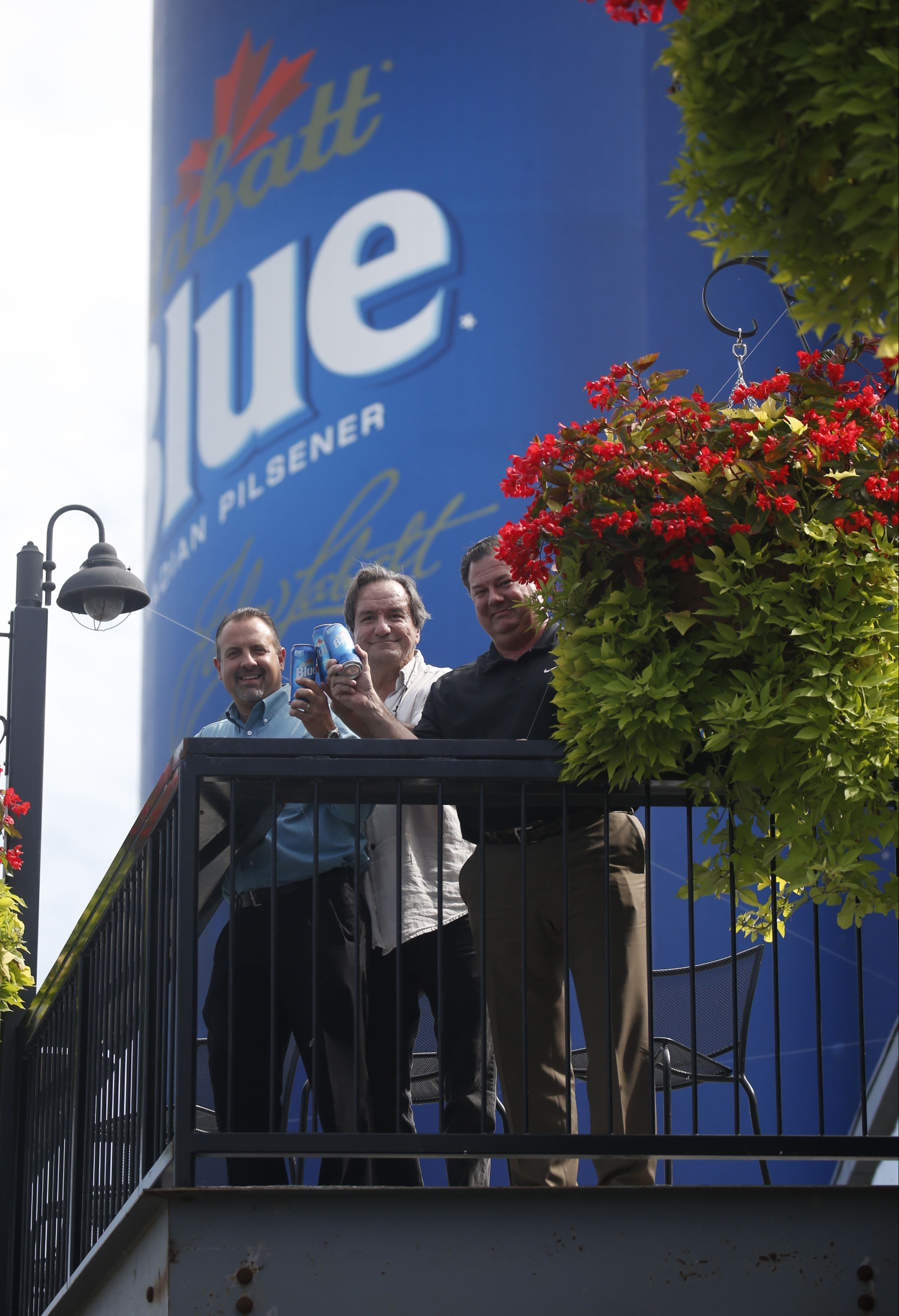 Earl Ketry, center, with Bill Casale, general manager at Riverworks, left, and Sean Green, director of athletics at Riverworks, stand on one of the facility's upper decks on Thursday, Aug. 25, 2016. (Robert Kirkham/Buffalo News)

And he said Western New York is missing opportunities to benefit from its historic and natural features by packaging visits together for visitors. "We’re morons if we don’t make Niagara Falls part of us," he said.

It's all part of boosting regional self-confidence, after decades of residents viewing the city as a downtrodden and dirty steel town with no future. The increased national publicity and renewed pride helps, he said, but it's only a start. "We’re just starting to fully believe in ourselves, and I think it’s critical," he added. "We’ve got to be yelling how cool we are at all times, and getting it out there."

Ketry isn't your typical entrepreneur. For all his bravado, pioneering and ambitious plans, he came from one of the most cautious and risk-averse professions: he was an accountant at one of the world's largest firms, on a partnership track. Indeed, the traits that made him successful at a KPMG LLP predecessor still show in his management of the business.

"We're obsessed with our financial statements. We have key ratios that I will not allow myself to violate, ever," he said.

But his real-life training, unpolished style and freewheeling personality, as well as his deep commitment to Buffalo, come from elsewhere. The son of immigrants from Germany and Austria, Ketry grew up on the more rough-and-tumble streets of Buffalo's Kensington-Bailey neighborhood, where "everybody had holes in their pants" and "everybody had a crappy bike." It was a lower-middle-class childhood, and although he says he "was a pretty good student," his parents couldn't afford to send him to college.

So Ketry found a job at Bethlehem Steel's blast furnaces for more than four years, paying his way through Canisius College while earning some burns and scars along the way.

He had planned to major in history "until I found out how much history teachers got paid," so he switched to accounting. He worked for Peat Marwick Mitchell & Co., where he rose in the audit and consulting ranks, and had a tempting opportunity to transfer abroad to London, Dublin or Beijing. Instead, he left to start his own business consulting practice, gaining significant experience in bankruptcies and turnarounds.

Perhaps most ironically, he counseled his own clients never to invest in restaurants. "When they came in and said they were thinking about investing in a restaurant, I’d say, 'Feel free to do so, but I promise you I’ll fire you,'" he said. "Anybody stupid enough to invest in a restaurant cannot be my client.

Ketry invested in Pearl Street Grill as part of a partnership with Denver's Wynkoop Brewing Co., when they opened the restaurant in 1997 - only the second microbrewery in town after Flying Bison Brewing Co. Problems emerged quickly with the primary operators, however, and after just 15 months, Ketry said, "they had the place pretty much bankrupt."

That's when he and the local investors took control. "What Pearl Street ended up being was practice what you preach," Ketry admitted.

Today, after a financial turnaround and multiple expansions, the restaurant is booming, with all four floors, two wraparound balconies and the basement now open, featuring nine bars and the Brawler's Back Alley Deli. Sales have grown more than seven-fold since 2000, and Ketry expects continued growth over the next five years.

The operation has also expanded to include the Pearl @ The Webb banquet facility, the restaurant, brewery and catering operation at the Lafayette, and the Lofts on Pearl hotel, with 32 rooms, just up the street from the restaurant. Finally, there's RiverWorks, a joint venture of Ketry, Doug Swift, the Paladinos, and other unnamed partners, that opened in 2014 in the former GLF grain complex on Ganson Street, with its ice rinks, the Labatt Blue Pond Hockey Tournament and other sporting events. The Ward Restaurant and Catering followed in July 2015, with the brewery, tours and kayaking coming this year.

Today, RiverWorks is home to the Queen City Roller Girls, who used to play in North Tonawanda, as well as a host of sanctioned sporting events almost every weekend, such as wrestling, curling, skating, ice hockey, in-line hockey, pickle ball, boxing, lacrosse, soccer, jujitsu and amateur mixed martial arts. Kayak, paddleboard and waterbike rentals are available, along with 750 feet of dock space.

The businesses are demonstrating their ability to handle significant volume. Last year, the combined companies handled more than 3,000 events, including 487 weddings, and officials expect more than 3,500 this year. On one Saturday this past summer, staff took care of seven weddings.

In total, Ketry estimates he has already reinvested more than $50 million into his Buffalo properties and projects, or "virtually every dollar we've made since 2000." And he's ready for more.

"We better get it right, because if our vision is wrong, the customer is never going to support it," he said.

That's the goal behind his latest initiatives.

Eager  to tie his properties together, Ketry bought a 1954 double-decker London bus, which he plans to refurbish and then deploy on Buffalo's streets to take patrons from one place to another. Besides advertising his venues, the bus could support a pub crawl, taking riders between RiverWorks, Pan American Grill and Pearl Street. "This thing is going to stand out like a sore thumb," he said. "It's outrageous, and if it isn't outrageous, we're going to alter it to make it more so."

At RiverWorks, an observation deck is planned for an upper level of the blue-painted Labatt "Six-Pack" silos, where the brewery is located. And an area of RiverWorks known as "Stonehenge" - because of the array of worn and crumbled pillars still standing erect after a previous building demolition years ago - is already destined for a new beer garden.

Then there's the zipline. Ketry and his partners hired an experienced adventure sports firm to help them create an adrenaline-focused ride that uses several of the former grain structures standing at RiverWorks, taking advantage of their size, shape, height and history. The zipline would take participants from the top of the Six-Pack to the "Bunker" - the immense L-shaped building next to the GLF silos - and back again. There, patrons take a rope bridge, about 60 feet over Stonehenge, back to the Bunker.

Ketry's team has also unearthed old maps and images of the city, the Buffalo River and the GLF operation from more than a century ago that they plan to enlarge and plaster throughout the complex, to highlight its legacy as a major grain shipping facility.

He is also looking for ways to boost revenues through new corporate sponsorships and unique advertising. And he and his partners are seeking city permission to put up a giant wraparound digital screen on a tower on the GLF silos, facing the Niagara Thruway. At 90 feet by 80 feet, it would be the 12th-largest such display in the world, outside of stadiums. It faced resistance from the Zoning Board of Appeals, which tabled it, but RiverWorks officials are still hopeful.

Finally, as RiverWorks builds a reputation in amateur sports and tournaments, it's starting to attract more out-of-town athletes and fans. Several events are already booked for next summer that resulted in a sellout at both Lafayette and the Lofts, forcing officials to turn to the Adam's Mark Hotel for additional rooms. Once that growth becomes more consistent, Ketry said, it will make sense to consider a third hotel, perhaps adjacent to RiverWorks.

But "it’s going to have to be something that’s part of the story," he said. "It has to be cool."