The private owners of the former Westwood Country Club in Amherst are taking another step toward their $238 million transformation of the golf course property into a new mixed-use neighborhood, renewing a process that is expected to be controversial among nearby residents.

Mensch Capital Partners filed an amended request with the town Planning Board to rezone 146.7 acres of the sprawling 171-acre property to make it easier to redevelop the land into residential, commercial and retail space. The investment group led by Andrew Shaevel envisions converting the longtime former private club into a variety of housing for 1,700 people, along with storefronts, offices, a hotel and parkland. The board is expected to review the request at its Nov. 17 meeting.

But neighbors have already been putting up a vocal fight against the mammoth multiyear project, which they say will harm the area by creating more traffic and parking headaches for nearby homeowners. They've called for the town to reject the proposal, and have mounted a campaign to stop it, with yard signs posted all along area streets. 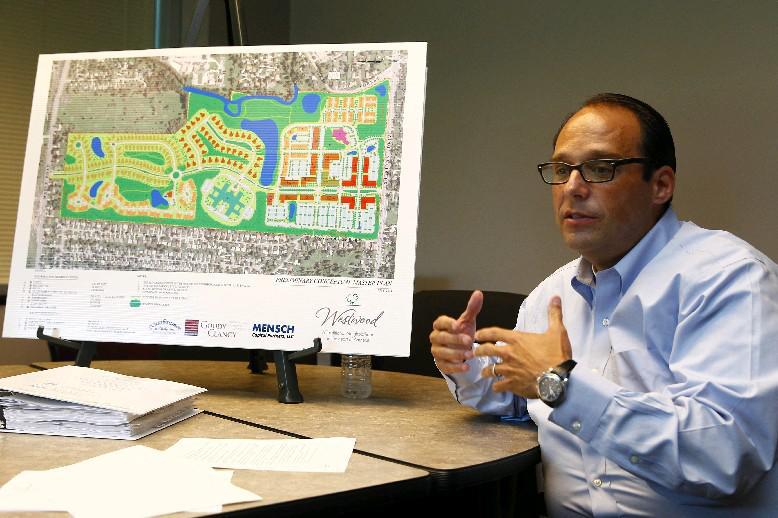 However, that's not a final approval, which may still be months away, given continuing environmental and municipal reviews. The vacant and fenced-in site was also designated as a brownfield site subject to state-supervised cleanup, after traces of arsenic were found in the soil from the days of pesticide usage. Native American artifacts were also found on the property. 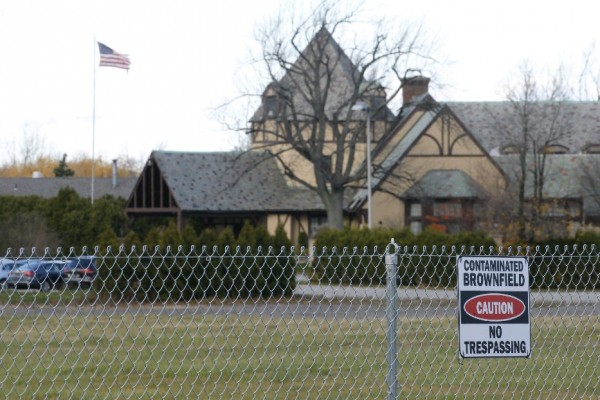 In the revised 221-page application, Mensch also lays out carefully worded and detailed arguments for how and why the proposed project fits within and meets the goals of the town's bicentennial comprehensive plan. That's expected to be the crux of the opposition.

"The Westwood Neighborhood is the embodiment of the comprehensive plan and its vision for the town," Mensch wrote. He said the developers intentionally designed the site at a scale that is cognizant and respectful of the surrounding residential character."

Town officials, led by Supervisor Barry Weinstein, have expressed their own reservations, and sought to negotiate a swap of the Westwood property for the municipal-owned Audubon Golf Course. But while that would have satisfied the Mensch partners - who preferred the Audubon course location near University at Buffalo - the two sides could not come to terms, and Mensch's filing indicates the firm now plans to proceed with its Westwood redevelopment.

Founded in 1945, Westwood had been a private members-only country club and golf course until shifting demographics and increased local competition caused a membership decline and financial problems that weighed on its ability to operate. Mensch bought it from the membership in March 2012 for $2.5 million, staving off imminent bankruptcy while agreeing to maintain the  club for a couple of years. However, the partners all along recognized the value and potential of the site for redevelopment, and shifted their attention after closing the club in 2014.

Plans for the proposed new Westwood Neighborhood call for a total of 985 residential housing units, plus 315,000 square feet of nonresidential space. That includes a four-story, 130-room hotel, plus six two-story professional or medical office buildings and 100,000 square feet of first-floor retail space. In all, 14 structures would be built, with a maximum height of four stories. And a new north-south road would be constructed between Maple Road and Sheridan Drive, as the primary access to the neighborhood.

The housing includes 160 patio and single-family homes, 84 two-family condominium town homes, a set of three-story apartment buildings with 280 units, 72 attached multifamily units, and 93 upscale rental townhomes, plus a senior facility with 96 independent-living apartments and 200 assisted-living units. Officials are planning for 5.78 units per acre - just over half of the maximum allowed by the town's comprehensive plan. 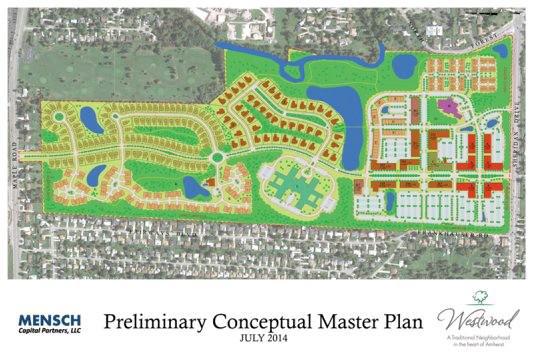 However, the current "recreation conservation" zoning does not permit such activities. So, Mensch wants 131.7 acres classified as "traditional neighborhood development," with another 13.59 acres as "multifamily" and 1.4 acres for "general business." About 64 acres, or 34 percent of the total area, will remain as open space, with a new 23-acre central park, plus lakes and ponds, and 2 miles of pedestrian and bicycle trails.

According to the application, which cited an analysis by the Center for Governmental Research Inc., the Westwood project would generate $52 million to $63 million in additional property tax revenues over 10 years, as well as $15 million in higher sales taxes and $10 million in new income taxes. More than 2,200 construction and 300 permanent jobs would be created.

If approved, work would begin in January 2018, and would extend in five phases over a decade until January 2028, based on market demand.