The owners of the former Loew's Theater Warehouse building in downtown Buffalo are seeking tax breaks to convert the seven-story building into an apartment building with first-floor storefronts.

Amy E. and Mark C. Judd are asking the Erie County Industrial Development Agency to approve about $166,000 in sales and mortgage recording tax incentives for their $4.27 million conversion of the vacant warehouse at 510 Washington St. into the Alexandre Apartments. They will apply separately to city officials for a routine property tax break through a city program.

The couple plans to create 12 market-rate one- and two-bedroom loft apartments on the second through seventh floors of the 23,847-square-foot building. The units will range in size from 882 square feet to 1,100 square feet, and will rent for $1,500 to $2,000 per month. 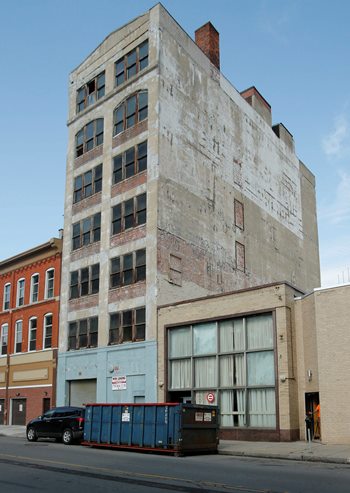 The building, which is located in the city's targeted downtown revitalization area, will also include 1,356 square feet of commercial or retail space on the ground level. That space will be leased as soon as it is finished by a new commercial and retail bakery, which will supply artisan breads and ethnic specialties to local restaurants, and will create four new jobs.

The Judds' application noted that the building is the tallest and one of the last vacant buildings remaining in the 500 block of Main, where it's part of the Main Street Historic District. It was originally used to store props, costumes, sets and films, and was later used for document storage by M&T Bank Corp. and Buffalo Place. But it's "currently exhibiting decades-old blight and urban decay" in what they describe as a "rapidly transitioning, upbeat and 'hip' new metropolitan neighborhood."

So the historic rehabilitation of the concrete structure, built in 1920 and vacant for 19 years, will also include "notable improvements" that will "enhance livability in this long-neglected downtown block," according to the application.

The owners hope to lease apartments to employees of the new high-technology hub anchored by IBM at 50 Fountain Plaza, as well as workers on the Buffalo Niagara Medical Campus and employees of new Start-Up NY participants. The Judds noted that Buffalo Mayor Byron W. Brown has called for 2,000 additional units of housing in downtown Buffalo by 2018 to meet the growing demand.

The project was designed by Schenne & Associates, while Hayes Construction Services Inc. is the construction manager. It's already been approved by the city's Planning and Historic Preservation boards, as well as by the State Historic Preservation Office, and the Judds said they are "technically prepared" to immediately apply for city building permits once they firm up bank and other financing.

But the Judds say they can't make the dollars work without the ECIDA help. The couple purchased the building for $340,000 in cash and said they have already invested $193,000 in "soft costs" over the past 29 months for engineering, design and pre-construction bidding.

There's a funding gap, they say, because of the "high cost of redeveloping this very tall but small footprint concrete warehouse for a modern mixed re-use development." Specifically, they have to put in new utilities, a new elevator and new stairs, while providing tenant entrances and making exterior repairs to the building's shell. The building also has asbestos. And there won't be enough rentable units to spread the "enormous cost" of the infrastucture improvements.

Besides the tax breaks, the Judds are also working with a consultant to obtain $2.55 million in construction and permanent loans, while exploring other special project financing and both local and state development grants. That includes $750,000 loans from the Buffalo Urban Development Corp.'s Buffalo Building Re-Use Project and the Better Buffalo Fund, as well as money from Community Preservation Corp. The project is also eligible for federal and state historic tax credits, totaling $1.3 million, as well as a $50,000 Main Street grant and a $50,000 grant from National Grid.

If approved, the Judds hope to start work next month and finish by mid-June 2017.