Andy Adamski hates Halloween, everything about it.

He hates it because any thoughts about the fun and frolic of Halloween take him back 34 years, to the night when his older brother, James, was beaten to death in a horrific crime that still remains unsolved.

James Adamski was 18 – 10 years older than Andy – the night it happened. Their family lived on View Court in Cheektowaga. Dressed in a costume that he called “the American Gigolo look,” James left late on the night of Oct. 30, 1982 to attend a Halloween Eve party at a bar on Transit Road in Depew.

“My last memory of my brother is him, in his costume, kissing me on the forehead and saying, ‘Have a good time trick-or-treating, kid,’” Andy Adamski said. “I will never forget that, as long as I live. This was the big brother who baby-sat me, who put me up on the handlebars of his bicycle and rode me all over town. I loved him and looked up to him so much.”

James went to the party – one of those “pay one price, drink all night” events – for most of the night. He left the bar early on Halloween morning, walking toward his home about two miles away, according to police. He was last seen walking alone along Transit Road near Broadway around 3:30 a.m.

“When he didn’t come home the next morning, my mother knew something was wrong,” Andy Adamski recalled. “He was very respectful of our parents. He would never have stayed away all night without telling them.”

Lancaster Town Police, assisted by volunteer firefighters, spent weeks looking for James, without luck. Finally, on Dec. 26, 1982, a couple of rabbit hunters found the teenager’s body under leaves and twigs in a wooded area west of Ransom Road in the town. The body was found about four miles from where James last was seen alive. 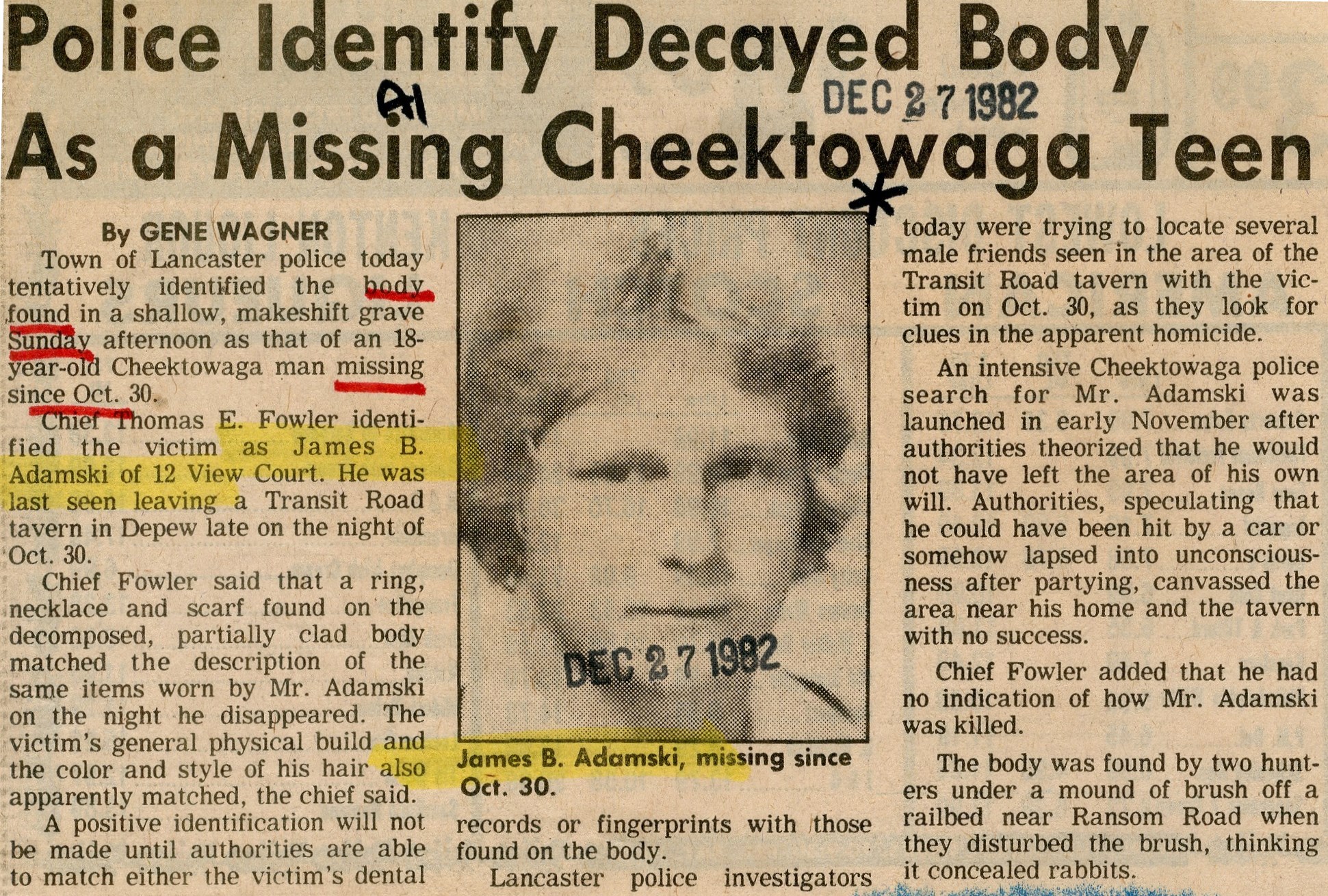 James was still wearing his Halloween costume, which included some gaudy clothing and a scarf and necklace.

“He was beaten to death with some kind of blunt instrument,” said Detective Lt. James N. Robinson of the town police. “It could have been a two-by-four, a baseball bat. Maybe a car jack from somebody’s trunk. We don’t know. He had numerous wounds from blows to his forehead.”

The killer, or killers, made an effort to hide the body.

“There were twigs and leaves that appeared to be purposely used to cover up the body,” Robinson said. “The twigs appeared to have been freshly cut or broken off a tree. Our department had the twigs analyzed at a laboratory, but no fingerprints were found.”

Dozens of people who knew James – including friends from Depew High School, former girlfriends and people who encountered him at the party the night he disappeared – were interviewed, said Joseph Gill, a State Police Bureau of Criminal Investigation investigator who has been assisting Lancaster Police with their cold case investigation.

“From everything we can determine, he had no known enemies. That’s part of the mystery of this case,” Gill said. “This was a good kid, not a troublemaker or a trouble starter in any way.”
Police did learn that James – along with many other people at the party – had quite a bit to drink. They also learned that, at some point, James and several other revelers got into an argument, possibly fueled by alcohol.

“But we haven’t found any information that this argument was anything that would have led to violence later in the night,” Robinson said.

While they cannot be sure, police believe that someone in a car picked up James as he walked, in an inebriated state, along Transit Road.

“We don’t know if someone picked him up as a hitchhiker, if someone who knew him invited them into their car, or if someone somehow forced him into a car,” Robinson said. “It was a gruesome crime, and after all these years, we would really like to find out who did it.”

The bar where the party was held was called 5 & 23. It was on Transit Road in the village of Depew, just north of Walden. It has been closed for years.

Although frustrated by the lack of evidence, police said they are determined to continue their investigation. Police recently sent all the clothing James was wearing to a laboratory for DNA analysis. But what they really need is for someone to come forward and help them with information.

“Somebody out there knows something … We hope that someone reads about this and remembers some little detail that helps. Maybe they were never interviewed by the police, and they should have been. Maybe they were scared to say something way back then,” Robinson said.

Investigators ask that anyone with possible information about the case contact the Lancaster detectives’ office at (716) 683-2800, extension 137.

“The victim was loved by his family. You can imagine the family’s sadness,” said Lancaster Police Chief Gerald Gill, who is Joseph Gill’s brother. “This is someone’s child, who is missed and loved by family members.” 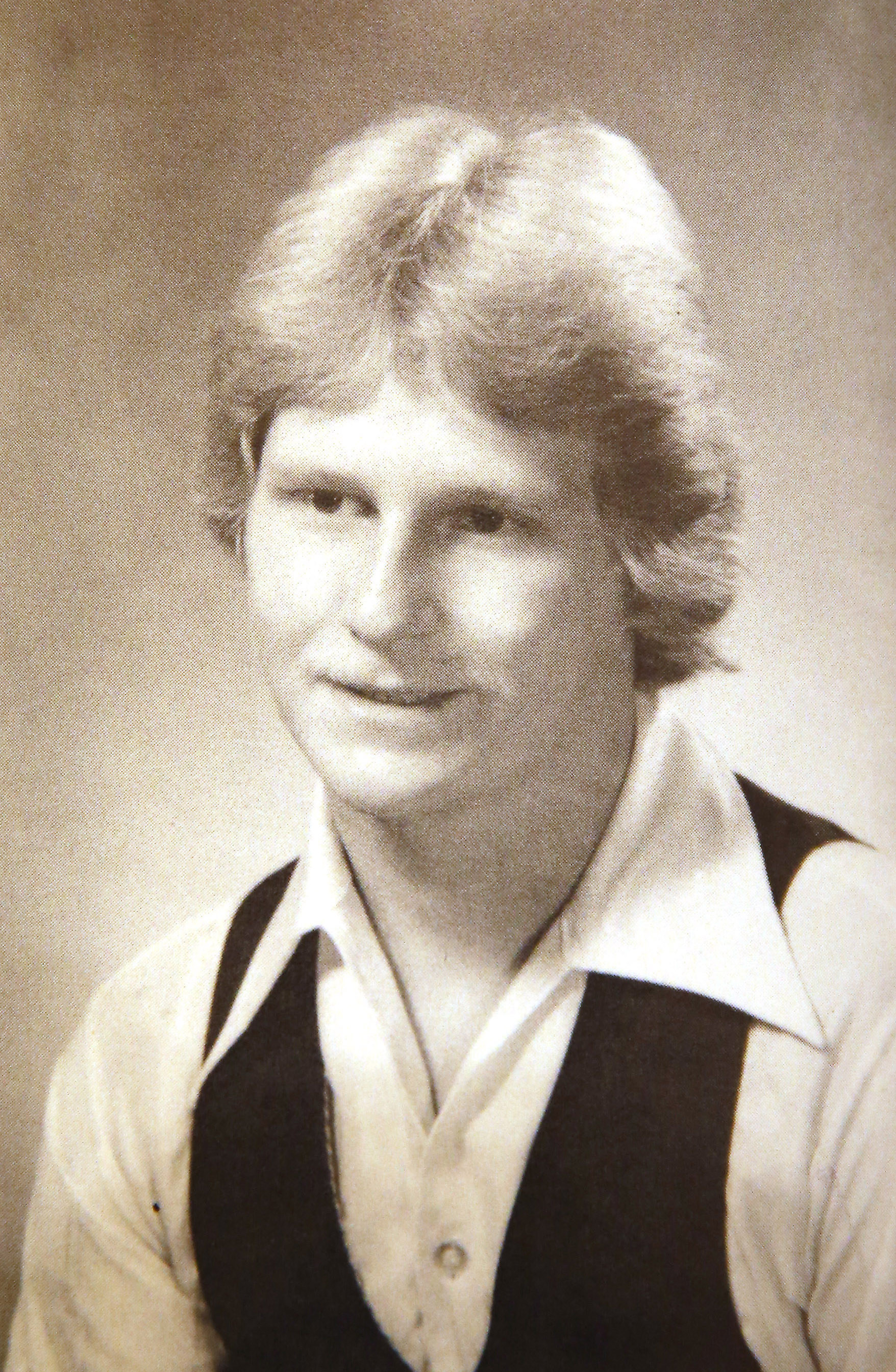 James’ unsolved murder had a profound effect on his family, said Andy Adamski. Now 41, he works in a warehouse and lives in the Buffalo area. He said the slaying devastated his parents, Bernard and Rosemarie, his other brother, Larry, and sister, Susan.

“My brother was such a good person,” Andy said. “He loved art and bowling. He loved Halloween, loved having fun with his friends. He was the type of person who would give you the shirt off his back, just so you’d have a shirt.”

He said the murder was especially hard on his mother, who died in 2005. Bernard Adamski died in 2000.

“My mother was never the same person for the rest of her life,” Andy Adamski said. “She overprotected me after that. For years, she drove me to school, wouldn’t let me take the bus. I always had to be home before the street lights went on. She always told me she was worried that they would kill me, too.”

“I wish the parents were still alive,” Joseph Gill said, “just so we could tell them that we’re still working on this.”

Andy Adamski said he appreciates that police are still trying to solve the case, and he will do anything he can to help them.

“If they ever do catch the person, and the whole story comes out, I know that will be hard for me,” he said. “But it’s even harder not knowing.”