"I stayed at Bell about six or seven months building P-39 Airacobras," he said.

But the teen wanted to do more. America was fighting a war on two fronts, Europe and the Pacific. And there was peer pressure: His friends were heading off to war.

"Some of them were drafted and others enlisted. I decided to enlist. I was just a teenage kid. My mother didn't like it, but she didn't try to stop me," he said.

In December 1943, he sailed aboard the Queen Mary with thousands of other troops who arrived in Glasgow, Scotland. Then they headed south to Camborne, England, and started delivering parts for the construction of boats that would be part of one of the largest amphibious military assaults in history --- the Invasion of Normandy.

"We didn't know it at the time that there was going to be an invasion," he said.

A member of the 1st Truck Company – a unit of African-Americans, except for the white officers – Webb said he never gave any thought to the segregation. He says he and his comrades focused on their job, delivering ammunition and supplies to the front lines and staying alive.

"We drove 2 1/2-ton, six-by-six  trucks. Most of the time we were in convoys and it could be devastating. Some of our guys didn't make it. Trucks were blown up."

He says he and the other drivers were never given information on their destinations ahead of time. They depended on the officers who were reading maps and leading the convoys. But one thing was certain: Wherever they were driving, they were sure to end up on the front lines.

"We were constantly up at the front lines, and you could hear the fighting all around you," Webb said. 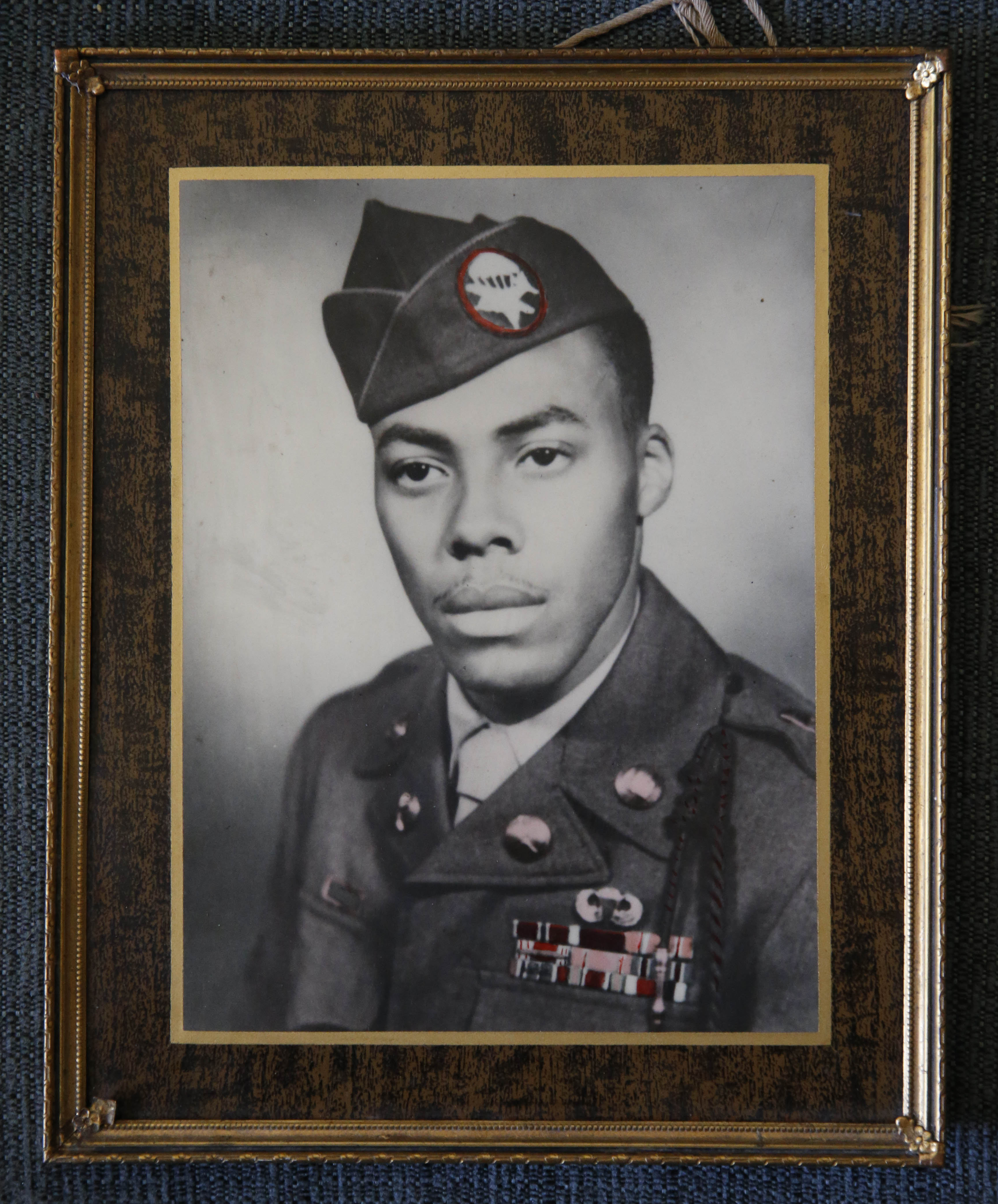 During the Battle of the Bulge,  he recalls they were on high alert day and night.

"Some of our trucks had 50-caliber machine guns mounted on the roofs, and the guns were going all the time. You couldn't sleep."

And even though he was inside a truck, Webb was not spared the harsh cold that so many of the ground troops experienced, often freezing to death.

"In those days, there were no heaters in the trucks, and there was many a time I wish I hadn't left home," he said.

How many trips did he make to the front lines? 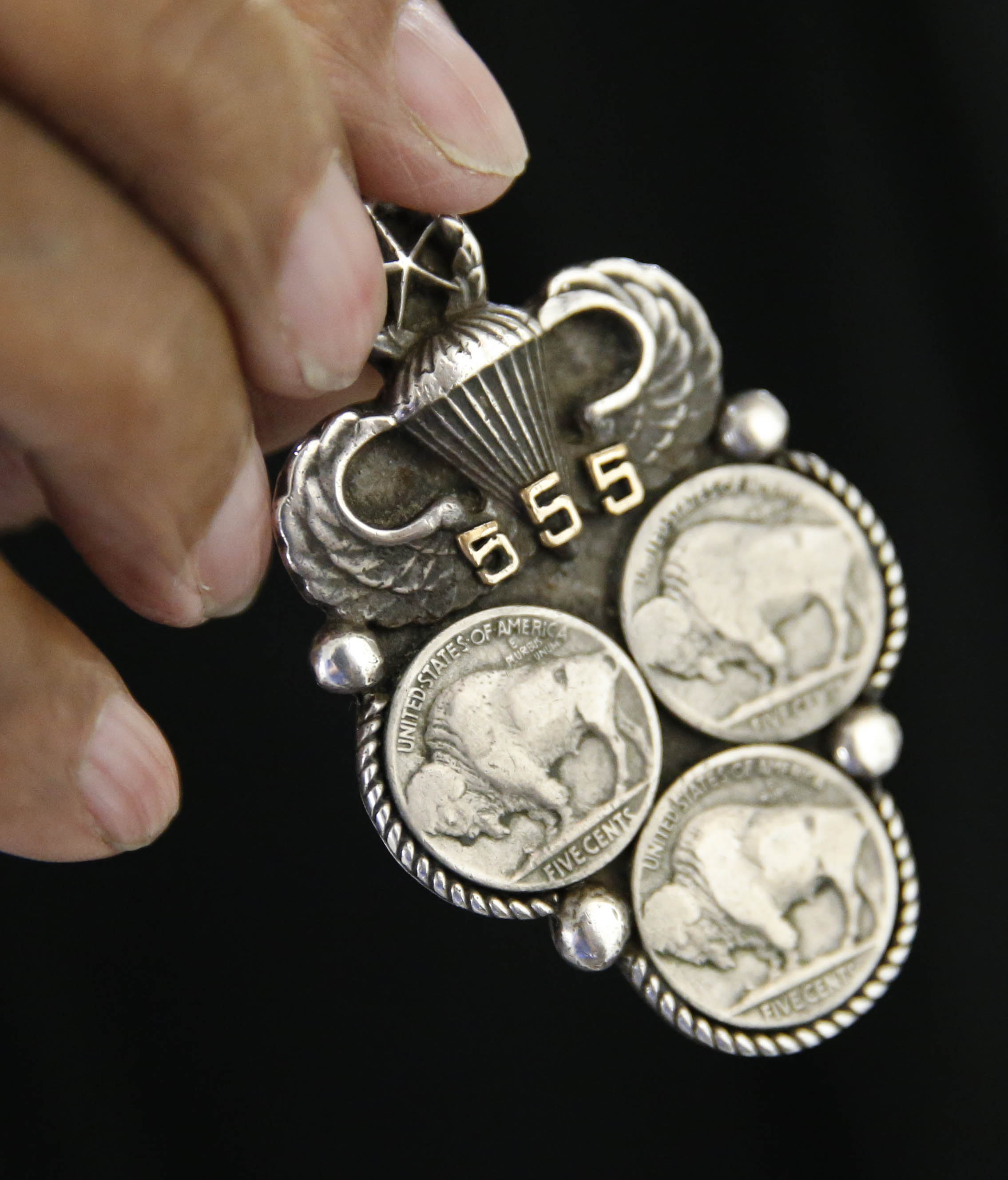 William J. Webb holds up the medallion he wears around his neck to honor the 555 Parachute Infantry Battalion, nicknamed "The Triple Nickle" in which he served. (Derek Gee/Buffalo News)

He says he does not recall, but he is certain he logged hundreds and hundreds of miles ferrying ammo and chow  from supply depots to combat zones. And when the war in Europe ended in May 1945, Webb was happy.

He recalls a visit to Dachau concentration camp where he saw "people walking around who were skin and bones." He also viewed the camp's ovens, where prisoners were sometimes burned alive.

In contrast to that horrific sight, Webb said he and fellow soldiers made a trip to Hitler's "Eagle's Nest" in the Bavarian Alps.

"It was at the top of a mountain, and we drove up in our trucks and Jeeps. We went all through Hitler's house. It was really elaborate. Nice big picture windows."

Webb returned to the United States after the war, and the teenager who had been eager to help America lost some of that enthusiasm.

"My mom was glad I was home and I was definitely glad to be home," he said. "I couldn't figure out why I'd wanted to join the Army."

But that didn't stop him from re-enlisting when the Korean War broke out.

"I was assigned to the 2nd Airborne Ranger Company. We parachuted into the front lines on Good Friday 1951," he said.

In comparing the two wars, Webb offered this insight: "A combat zone is always dangerous and the enemy is the enemy."

A year later, he returned home and  found work at American Axle's East Delavan Avenue plant, where he retired after 28 years.

The father of six children, the  91-year-old Webb says he still thinks about his service in two wars.

"It allowed me to experience the things of life. But if someone offered me a million dollars now to experience it again, I wouldn't take it."