The best recipe for breaking a drought's grip is adding rain to the soil.

And, there was plenty of that this month in the Buffalo Niagara region.

As of 8 a.m. Saturday, 4.37 inches of precipitation fell at the Buffalo Niagara International Airport, according to the National Weather Service.

That's more than an inch above normal for October, and the most rain in a single month since 4.39 inches fell in August 2015.

With another quarter-inch forecast on Sunday, October 2016 should end above 4.6 inches, making it the wettest month on record in Buffalo since July 2014. There was 5.45 inches recorded that month.

Weather service records show that measurable precipitation fell on 12 of the first 28 days of October with traces of rain on four others.

The federal drought monitor continues to classify most areas of the region - including Erie, Niagara, Orleans, Genesee and Wyoming counties - under "severe drought" conditions, however, the map shows progress in many portions of the western part of the state has been gained. 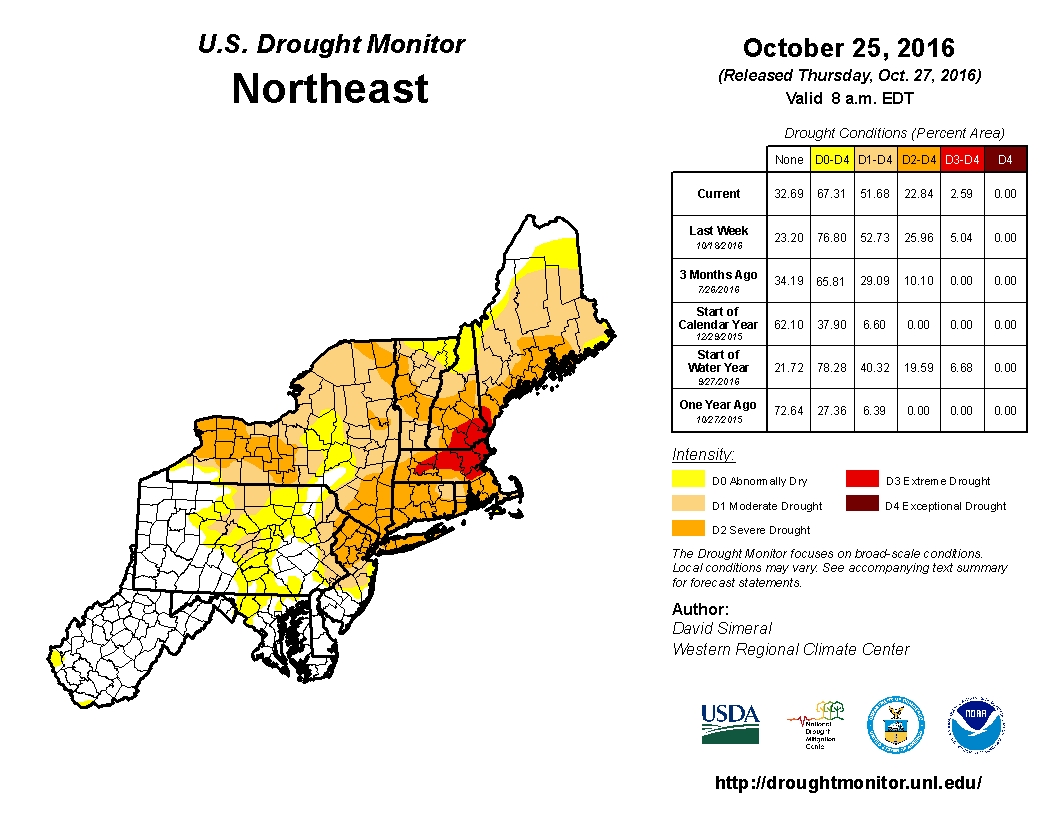 The federal drought monitor report released this week shows most of Western New York remains under severe drought conditions" as the annual precipitation deficit remains more than six inches below normal, however, a wet October has chipped into the drought in many areas. Portions of the western Southern Tier aren't classified as under any drought at all. (U.S. Drought Monitor)

As recently as a week ago, areas of the Genesee Valley remained in the red under "extreme drought" classification. That extended near to the eastern Genesee County border.

Moderate drought conditions were also reported along the Lake Erie plain from Ripley to Irving a week ago. That's also improved, according to this week's report.

Despite the gains made, the region remains about a half-foot below normal for precipitation in 2016.

As of this morning, 26.42 inches of precipitation was recorded in 2016 at the Buffalo airport.

By the end of October, about 33.24 inches usually falls on average, according to weather service data.