We have major holidays that celebrate gratitude, giving, loving — all kinds of uplifting things. And then there’s this one, All Hallows’ Eve, where we celebrate fear. Ghoulish, grisly, gut-tangling fear.

We dress up as zombies, monsters and killers. We willingly tiptoe into (or less willingly get dragged into) haunted houses, go on ghost walks, watch horror movies. We turn our gravest emotions into a social experience and call it a holiday.

A holiday season, actually, one that lasts for a month or longer, and one that Americans will spend more than $8 billion this year to celebrate, according to the National Retail Federation.

[Read more: Why are we fixated with fear?]

Eight billion bucks to exploit our deepest-rooted, exponentially unlikely-to-happen fears. And when we’re not doing that – when we’re not celebrating guts and gore – we’re dressing ourselves or our kids as princesses and comic-book characters or fairy-tale figures. Then we’re knocking – sorry, we can’t be that polite; we’re screaming – on our neighbors’ porches to ask for free candy. 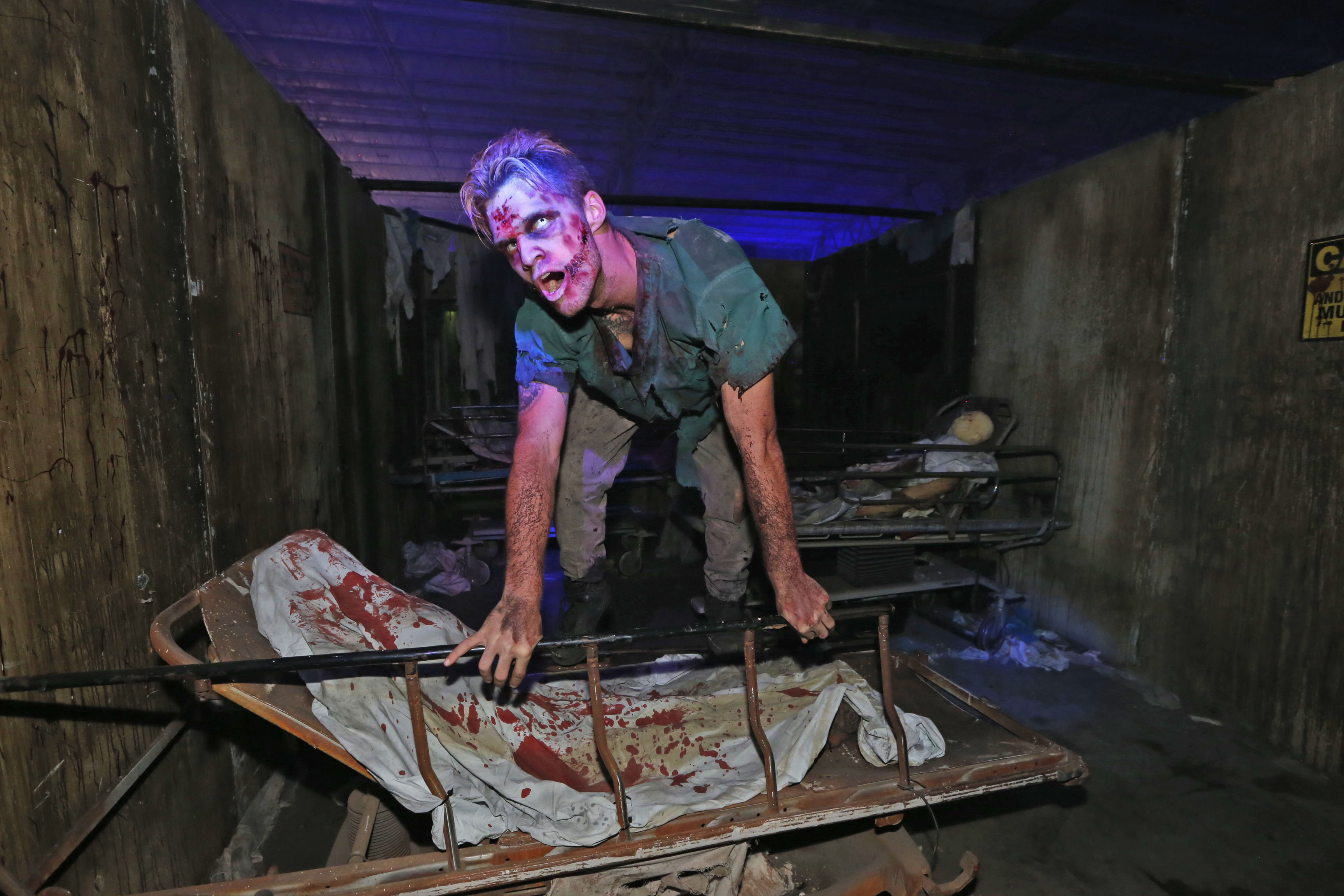 Zombies jump out at guests at Frightworld in Tonawanda. (Robert Kirkham/Buffalo News)

A factory of fear

Confession: Though we seem to be sticking a pitchfork into your trick-or-treat bag of Halloween perceptions, we get it. Who doesn’t like the socially acceptable opportunity to dress like a movie character and chew fistfuls of candy? Even we enjoy it.

One of us (Alyssa) is mortified by haunted houses, horror movies, or anything in general that involved blood, gore or ghosts. The other (Tim) is boringly unaffected by these things. Haunted houses don’t entice or repel him, and he watches horror movies with the same level of interest he may give to a Cellino & Barnes commercial: He’s vaguely aware when one is playing in his presence, and thinks they’re all the same.

Given that, the natural place to begin our plunge into Halloween psychology was a haunted house. (The fake kind; not an actual house apparently haunted by an actual ghost.) The two major haunts in Western New York – Frightworld Screampark in Town of Tonawanda, and House of Horrors & Haunted Catacombs in Cheektowaga – are seasonal. Neither was open in August, when we first started talking about this, so we headed across the Rainbow Bridge. Inside a former coffin factory at the top of Clifton Hill in Niagara Falls, Ont., sits Nightmares Fear Factory. It has a dripping-blood logo and a website that touts, in bold blocky letters, that more than 140,000 people have chickened out.

Here’s how it went when we arrived:

Alyssa: I must have looked as pale as the ghost I assumed was plaguing the room upstairs. “You know you don’t have to go in,” Tim said. He was smirking.

Tim: I was being empathetic and supportive. I wasn’t smirking.

Alyssa: You were smirking. But you were definitely empathetic and supportive too.

Tim: We actually had enough material to do the story without you going in. If you stayed in the lobby, you’d be writing right now about how the fear overcame you.

Alyssa: Walking into the lobby was not my best moment. I thought I was either going to cry or throw up. Maybe both. My gaze landed on the black “I chickened out” T-shirt. I’m 23 and still cover my eyes during horror-flick commercials. That T-shirt looked like a good fit. 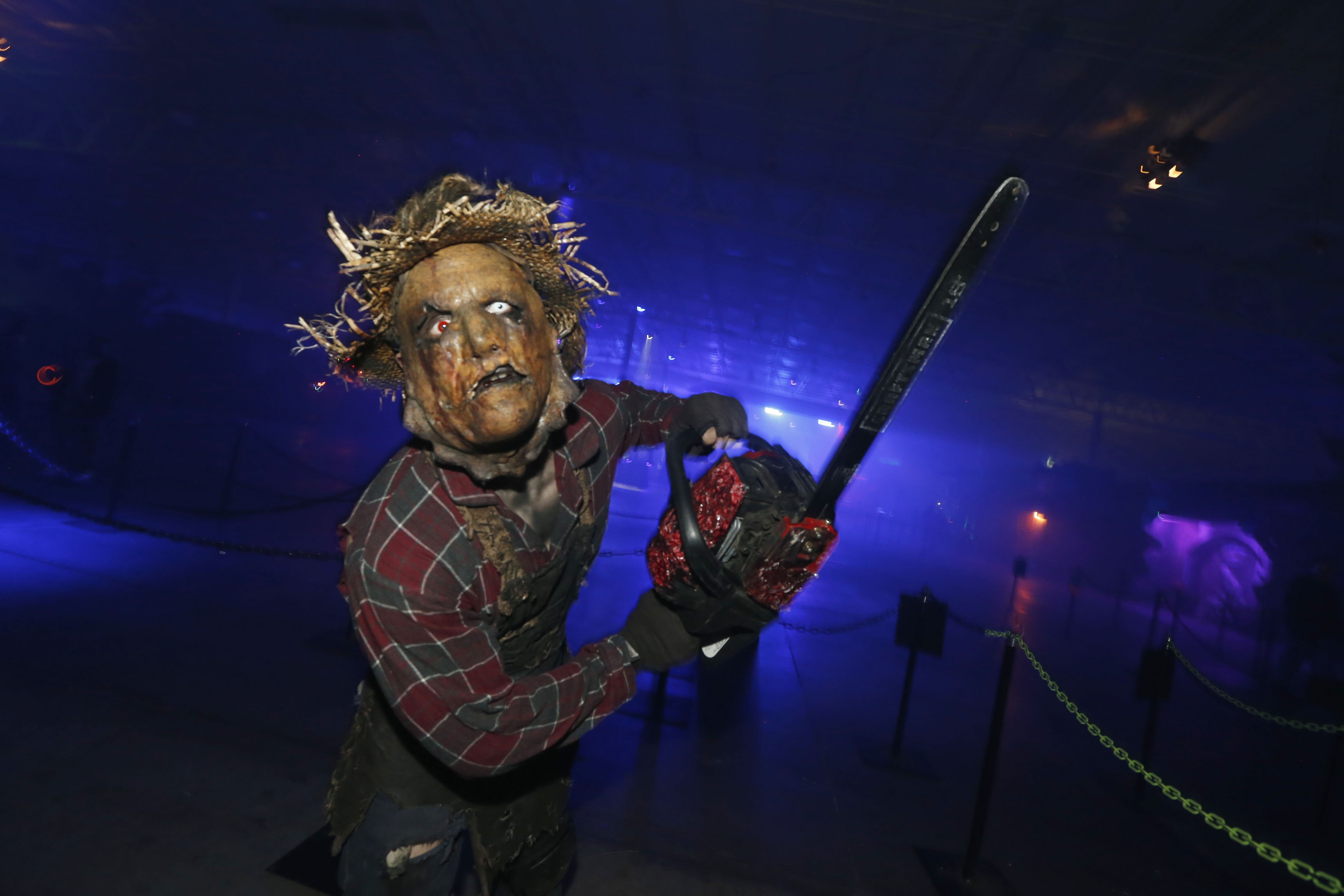 Chainsaw maniac Trevor Feger of Amherst is a crowd pleaser as he has customers running for the exits at Frightworld in Tonawanda. (Robert Kirkham/Buffalo News)

Ah, the T-shirt. It’s a good reminder that fear isn’t just an emotion. It’s a business — a big one.

Here’s a fearonomics snapshot: Halloween spending has risen from $3.3 billion in 2005 to $6.9 billion in 2015, according to the NRF. The highest spending in the last decade was $8 billion in 2012, so if the NRF’s projection of $8.4 billion for this season comes true, it’ll be a nice jump.

One out of every five Halloween consumers also drops money to visit a haunted house, like we did. But thanks in large part to the same pop-culture trends that are driving those costume choices, the other 80 percent are left explaining why they’re not visiting the haunts.

“As a culture now, we’ve reached the point where it’s actually people who are not interested in those things feel like they have to explain themselves more than people who are interested in those things,” said David Schmid, an associate professor at the University at Buffalo who specializes in the portrayal of crime and fear in popular culture. “If you think about it, it should probably be the other way around.”

Schmid points to television shows like “Criminal Minds” as providing people a mechanism to justify their interest in the scary and disturbing. 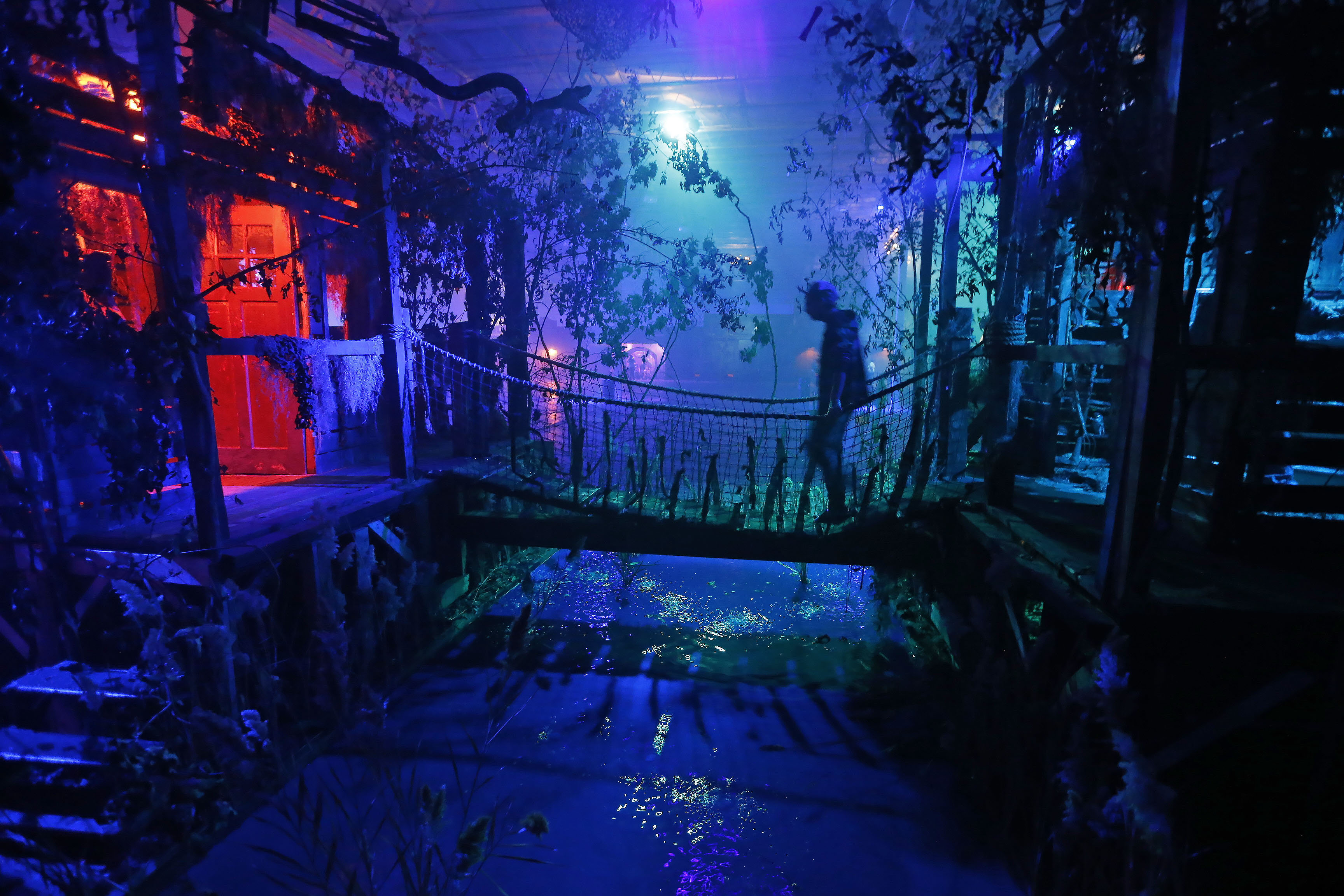 While some of us justify our interest in the eerie by “learning,” others embrace avoidance. One of those people was the third member of our Nightmares Fear Factory party: Tim’s 22-year-old daughter, Bryanna. Like Alyssa, she hates haunted houses and won’t watch horror movies.

Also like Alyssa, she promised to confront her fears that day. But when we arrived in the Nightmares Fear Factory lobby — or more specifically, before we even ascended the stairs to the actual lobby — she noticed a coffin. It was a prop. (Heck, everything there is a prop. Isn’t it?) But it startled her, and she made an announcement: “I’m not going in. No way.”

Bryanna sat on a bench in the lobby, right underneath a neon dry-erase sign with that day’s “Chicken Out” tally.

Alyssa: I didn’t blame Bryanna. Actually, I was jealous of her.

Tim: She had company out there in the lobby. A family with two young sons walked in. The two little blond boys went into the haunt with their mother, but —

Alyssa: But the father shuffled backward. “No way I’m going in there!” he said. I understood his feelings. Right about that time I heard a loud boom and screaming. I kept looking at the chicken-out T-shirt. And Bryanna. And the dad.

Tim: And I told one you more time you didn’t have to go in…

Alyssa: But I hated the idea of giving up. I’m stubborn like that. 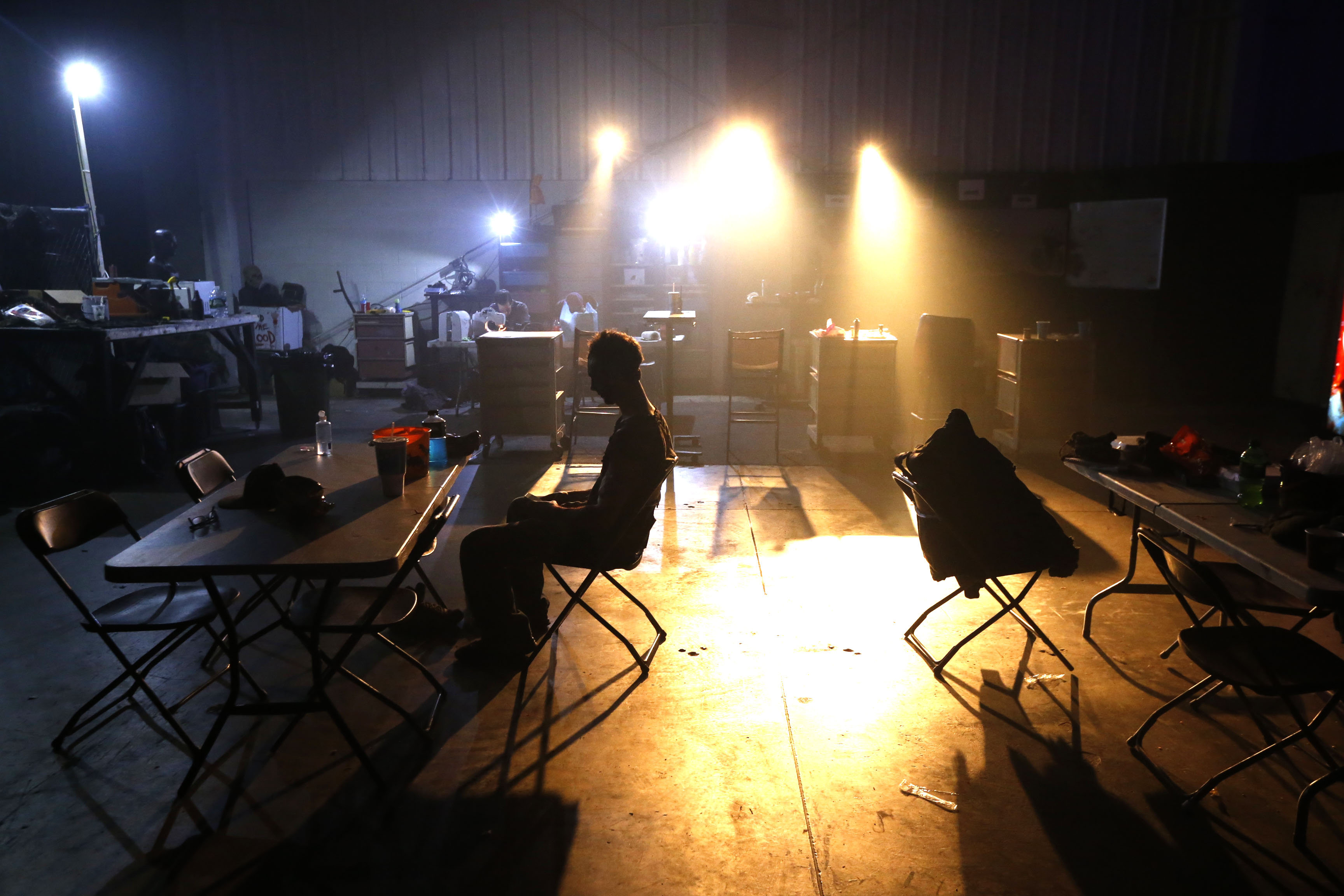 One of the scare actors, with fresh makeup and costume on, waits for his shift to start at Frightworld in Tonawanda. (Robert Kirkham/Buffalo News)

Intrigue is a powerful emotion. That’s what kept us in line at Nightmares Fear Factory in Niagara Falls. What was on the other side of that turnstile? When the green light signaled us to enter, what would we find?

The worker at the counter gave us a safety word: If we got too scared, we could stop and yell “Nightmares!” and a staff member would escort us out.

Alyssa: I think he was telling me, not both of us. You didn’t look too scared. Me, on the other hand…

Tim: You were wearing sunglasses inside. That might have given it away.

Alyssa: I put on the sunglasses because they made me feel braver. I felt like they would shield me from the horror. But the attendant said to me, “You might want to take those off. You’re going to lose them.” I said back to him, “What do you mean, ‘lose them’?” He laughed.

Tim: It’s like the instructions you get before riding a roller coaster: Secure all loose items.

Alyssa: Right. But this wasn’t a roller coaster.

The light turned green and we entered the Factory. First we climbed up a set of stairs, then reached a faux-wood door covered with bloody red “Do Not Enter” warnings.

Alyssa: I thought, Maybe I should listen. But then I opened the door.

Tim: And inside was this thick, black darkness.

Alyssa: I was already covering my eyes, which makes no sense, since we couldn’t see anyway. I remember saying, “Where do we go?”

Tim: Someone actually answered you.

Tim: Which is when I noticed these tiny red-lit dots on the ceiling.

Alyssa: Which is when I noticed we weren’t alone. People were watching us.

Tim: The “red lights!” note was really helpful — it was telling us where to go. So I said, “Thank you!”

Alyssa: That was a mistake. 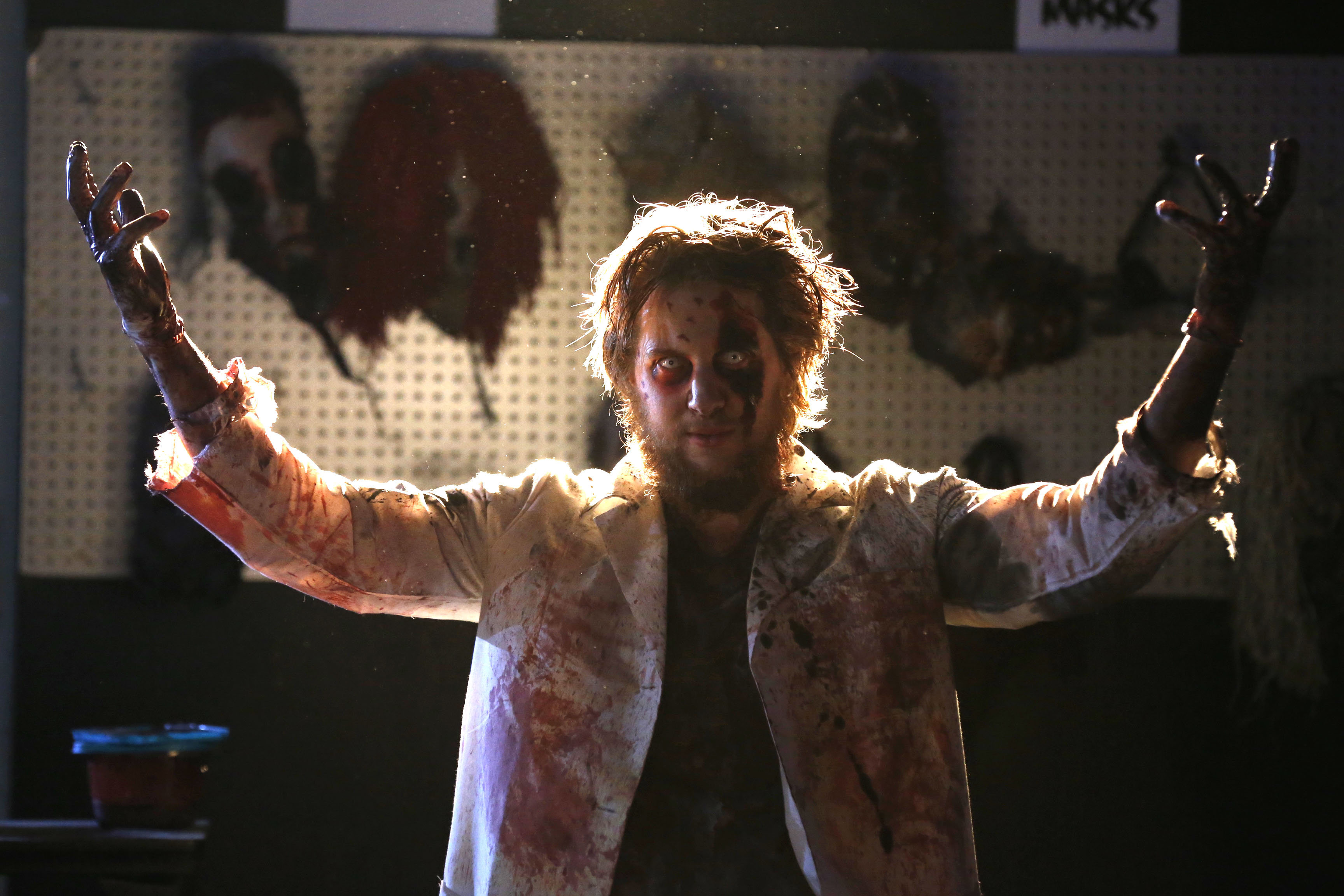 Bobby Weber, of Lockport, one of the scare actors at Frightworld in Tonawanda. (Robert Kirkham/Buffalo News)

The art of the scare

Other haunts claw into your brain with a more visually rich approach. Inside a former BJ’s Wholesale Club in Tonawanda, the seasonal Frightworld Screampark has five themed haunted houses with names like Insanity (a chain-link fence maze), Asylum (an abandoned pysch ward) and Grind House (which feels like a serial killer’s lair).

Frightworld’s houses are staffed by more than 100 live actors who are hired in what general manager Steve Szortyka calls a “pretty awkward” interview process.

“It’s in a regular plain white room and you’re pretending that your hand is attacking your face,” Szortyka said. “With all the lights on, no sound, no music, and there’s seven people staring at you.”

If a monster wannabe can be scary in that sterile setting, imagine what that person can do with bloody makeup, a mask and ripped and burnt clothing inside a dimly lit room with screams and clanking and chainsaws punctuating the foggy air.

Andrew Lavin is in charge of makeup and design at Frightworld. Each night, Lavin and an assistant or two wield makeup brushes like scalpels, churning an assembly line of actors into monsters with sunken eyes, and darkened jawbones.

“I don’t like clean skin,” Lavin said. “Clean, bare skin looks normal. It looks pretty. So we try and get as much coverage as possible, soaking them in blood and dirt.”

Several of the zombies pick up a small bottle and squirt the contents into their mouth, creating a black, frothy drool. It’s actually Listerine and food dye.

Good thing, because although they won’t touch you, those monsters will get close inside the houses. Especially if they know you’re freaked.

“The number one rule when you go to a haunted house is do not act scared,” Szortyka said. “It’s 100 times worse when somebody sees that you’re a little nervous or you’re scared. They focus in and go into attack mode.” 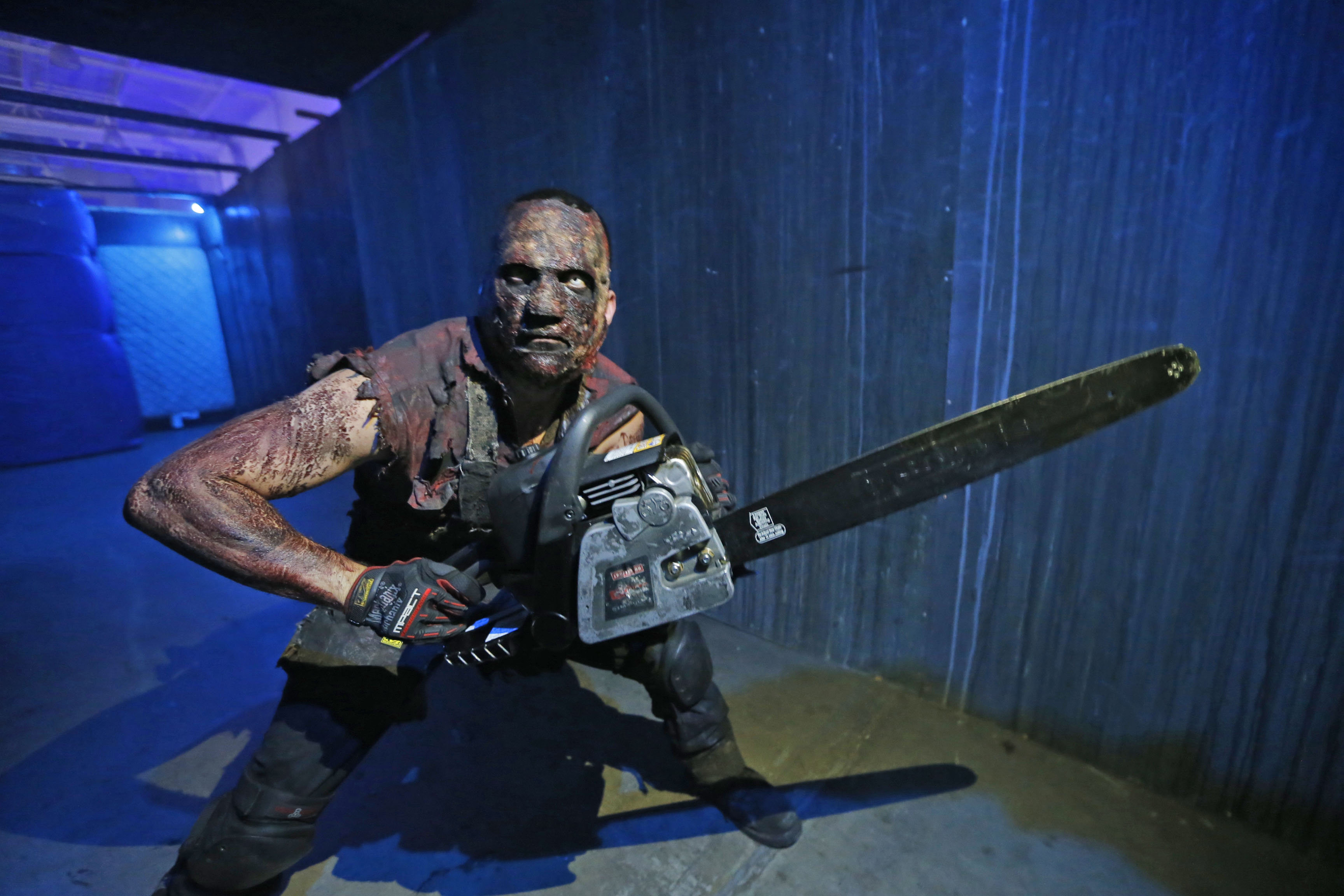 We couldn’t see them, so it’s difficult to be certain, but we’re pretty sure that whomever – or whatever – was inside Nightmares Fear Factory was preying on Alyssa.

Alyssa: I screamed with every boom and crash. The walls closed in on us and I cried. I shouted expletives. Ugh.

Tim: Note to readers: Want to see a different side of your co-workers? Take them to a haunted house.

Tim: More than a few.

Alyssa: I thought we were at the end when we exited the dark tunnels and entered a regular staircase. We went down a flight. Tim high-fived me. We were done!

Tim: Almost done. I learned later that haunt designers, much like moviemakers, like to build in temporary breather. It makes you relax —

Alyssa: — and then they nail you at the end. Which is what happened at Fear Factory. We re-entered a dark hallway, and I ran through it screaming and panting into the lobby.

Tim: My daughter Bryanna and the guy behind the cash register were laughing. So was I.

Alyssa: I wasn’t. I felt like crying and throwing up, and imagined my mascara running and eyeliner thick like a raccoon’s glare. But I didn’t care. I was happy I made it through. They gave me a wallet-size “survivor” card.

Tim: The far wall of the lobby had a rack of “I Survived!” T-shirts. I bought one for Alyssa. She deserved that.

Alyssa: I did survive — and I proudly wear my shirt and carry my card to prove it.