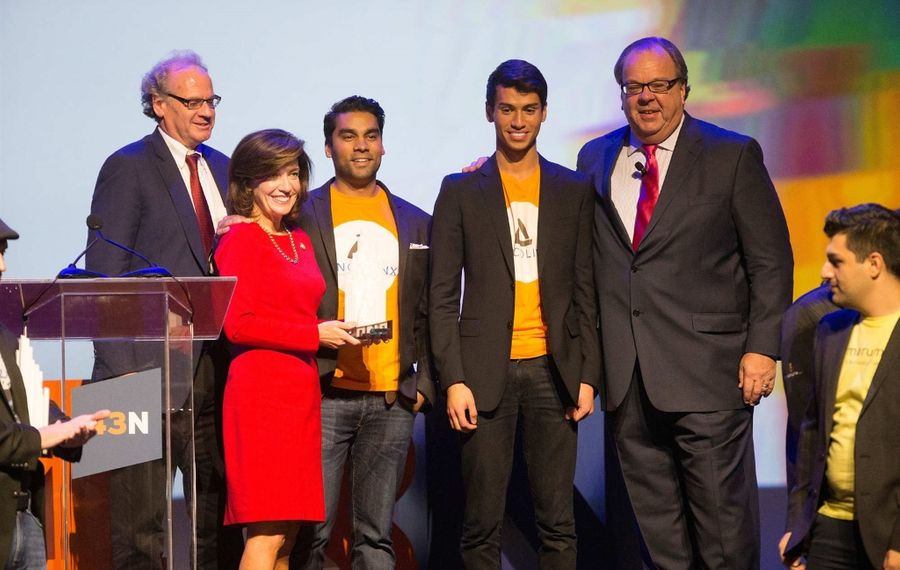 A life sciences company had the $1 million plan.

On Thursday night, 43North culminated in the selection of a Boston company that develops cancer immunotherapies, known as antibody-drug conjugates, as the top prize winner.

Oncolinx, which has worked with the National Cancer Institute on efforts to target cancer cells without harming healthy cells and without the side effects of chemotherapy -- a concept that seems like it would be right at home on the Buffalo Niagara Medical Campus -- took home the cash after a competition that built in tension and excitement.

How did it feel to be making that winning pitch?

"Really surreal. Sure, there’s a lot of pressure," said Sourav Sinha, Oncolinx's CEO, after the prize was awarded. "But we fight for cancer patients. And what they go through every day makes what we do really easy."

"It’s really important for us to step up and fight for them."

The startup beat out 14 other companies over two days of judging in the Buffalo-based contest, now in its third year and billed as the world's biggest competition of its kind.

The ultimate showdown came Thursday night in Shea’s Performing Arts Center, in front of a couple of thousand people who saw Oncolinx’s founders square off against the founders of two other startups, plucked from among the final 10 43North companies, “Shark Tank” style.

43North organizers wanted to highlight the region’s economic resurgence, and the competition’s contribution to that revival.

Russert played into that theme with remarks both serious and light throughout the night.

"Even coming here tonight, we got caught in a traffic jam -- that's progress," said Russert, the son of the late newscaster Tim Russert, a South Buffalo native.

As Lt. Gov. Kathy Hochul announced Oncolinx’s victory, co-founders Sinha and Riley Ennis pumped their fists, hugged and then shook hands with the officials giving them their trophy.

The company has partnerships with 14 pharmaceutical companies, and believes its technology can be effective against as many as 30 kinds of cancers.

Sinha said Oncolinx hopes to begin clinical trials next year for triple negative breast cancer. Ennis said the goal initially is to license its technology to those pharma companies and plow this revenue back into research and development and contract manufacturing work that would be done in Buffalo.

The company's founders have worked with Dhaval Shah, an assistant professor in the University at Buffalo's School of Pharmacy and Pharmaceutical Sciences, for about a year, and look forward to collaborating with him more in the coming year. They also said clinical trials could be performed at Roswell Park Cancer Institute.

“It took a long time for us to get here, and I think we’re drawn here because of the science, because of the technology," said Ennis, the chief operating officer, of the emotion of the win. "But to feel the support of 43North and the fact that now our dreams and dreams of many people could come true, for us, is the best opportunity."

One of the judges, venture capitalist Erik Moore, said afterward that Oncolinx stood out because its founders were tackling an important issue, and the judges were convinced they would move to Buffalo.

"The others are very important as well, but this one to me, they pulled on our heart strings, for one," Moore said. "Secondly, they were so well versed, so well prepared, they knew the market cold. They had a phenomenal team. They really had a plan to get to the next level."

The 10 companies didn't know which three would be asked to pitch live until moments before they had to come out on stage to do that, adding to the drama of Thursday night.

Oncolinx competed against Asarasi and HigherMe for the top prize. The three vying for the $1 million were picked based on 10-minute pitches they made earlier Thursday to the same panel of judges.

"All 10 of them are fantastic businesses," said Alysia Welch-Chester of Niagara Falls, who recently moved back to the area and started her own company, a matchmaking service called Soul Connective. She said she hopes to enter the contest herself eventually.

"These are 10 varied companies," said Jim Hatem, who worked in engineering and finance at Calspan and General Dynamics and has volunteered for each of the past three years as a judge in the early rounds of the contest. He said it's a hard task for the finals judges to compare a biotech company to a building materials company.

HigherMe, in second place, is a Boston company that developed software to help retail and hourly employers quickly hire better employees. With four of the 15 contending companies hailing from Boston, it's not surprising the two top finishers came from the Bay State.

• Asarasi, which makes bottled sparkling water from the water left over from the maple sugaring process.

• Bounce Imaging, from Boston, which makes 360-degree, disposable cameras in balls for first responders to use as they enter dangerous spaces to better identify hazards ahead.

• PathoVax, a Baltimore biotech spinout from Johns Hopkins University that is commercializing RGVax, a low-cost vaccine to prevent HPV-associated cancers.

The two companies that, as alternates, didn’t win any money are:

• The Wealth Factory, a Washington, D.C., startup that has created a mobile and web-based game to promote financial literacy.

The Wealth Factory didn’t go home entirely empty-handed. The startup was voted the winner of the People’s Choice Award, via text message balloting from the audience, earning its founders $10,000 in funding courtesy of Ciminelli Real Estate Corp.

Organizers made several changes to the contest format this year, to bring in a higher-quality mix of contenders, even if fewer companies applied. They asked applicants to answer more questions, including more questions about their finances, earlier in the application process than in previous years. And they charged an application fee for the first time.

They brought in 542 qualified applications, a total whittled down to 142 semifinalists and 16 finalists – although one withdrew before the pitches began Wednesday.

The payoff, organizers and observers said, was in more mature companies from a broader geographic area that have raised more money from investors and already generated more revenue from sales.

The organizers also changed the rules to make things more interesting once the companies got to town.

In the first two years of the competition, every company invited to attend the finals in Buffalo was guaranteed to win at least the minimum prize of $250,000. The only question was how much money each company would win.

This year, only eight of the companies receive a prize – but the minimum payout was doubled, to $500,000. The other seven companies go home empty-handed, including two that received that news on the Shea’s stage Thursday night.

In another wrinkle, there were two days of judging -- first on Wednesday in the Atrium at Rich Products to trim the finalists from 15 down to 10 and later from 10 down to the three companies whose founders made pitches live on Thursday night for the chance to win the $1 million grand prize.

Thursday’s judging took place in two rounds at Shea’s, with tough questions in particular in the morning and early afternoon session.

Thursday night, the organization announced it was giving $300,000 in follow-on funding to one company from the first two years of the competition, revealed as CleanSlate.

43North is part of Gov. Andrew M. Cuomo's Buffalo Billion initiative, with most of the funding coming from the New York Power Authority.