NIAGARA FALLS, Ont. - In old stone building high above the street in Queen Victoria Park, the Illuminations Tower houses rows of spotlights which have lit up the American and Horseshoe Falls since 1925, offering millions of visitors a view of the falls after dark.

But the nighttime view of Niagara Falls is about to change dramatically as the lighting technology used moves into the 21st century.

Since the late 1990s, the falls have been are lit with 21 Xenon spotlights, 18 on the Illumination Tower and three more in the Niagara Gorge. The lights are in cases that date back decades before then. But these fixtures are being scrapped as part of an over $3 million upgrade. 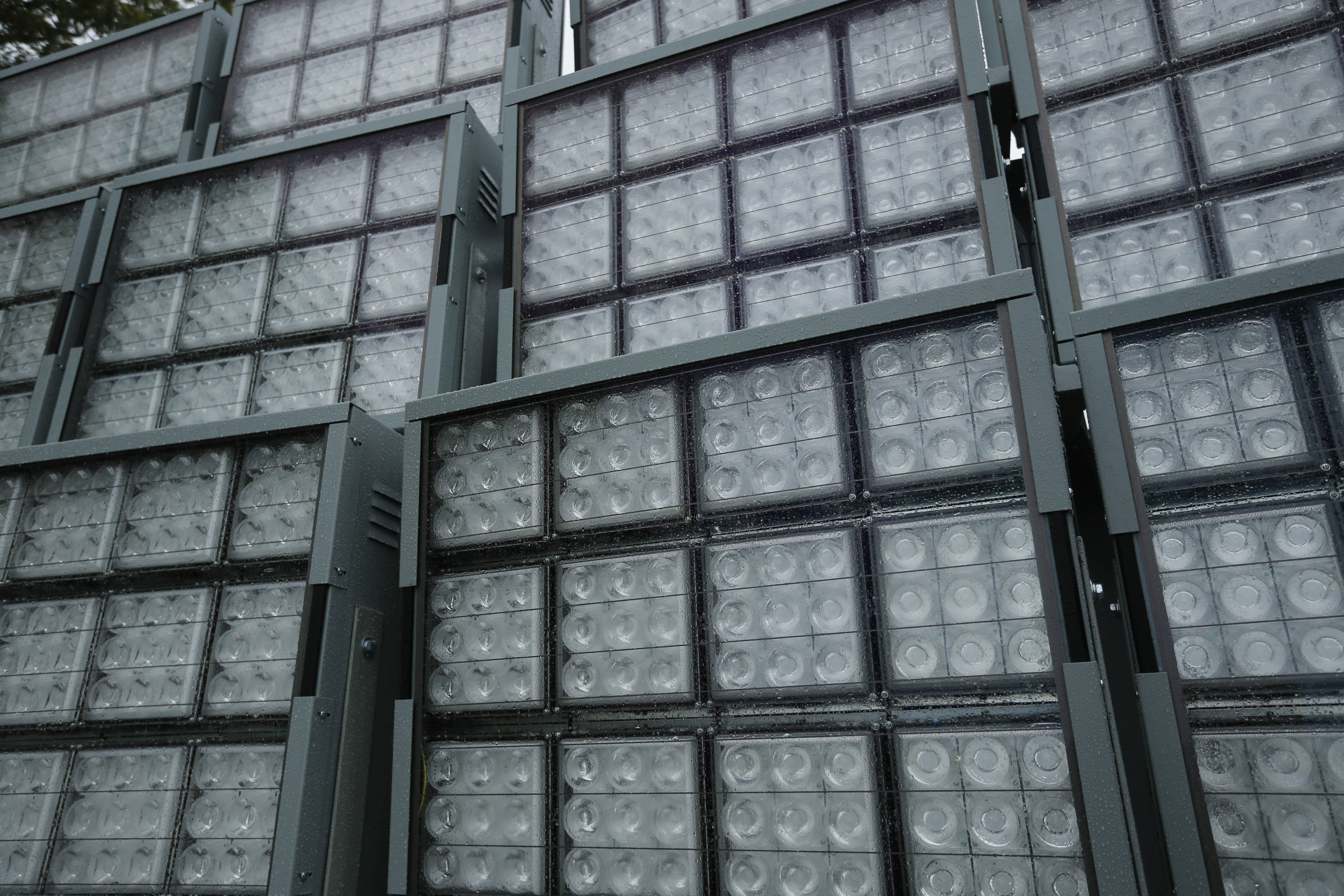 The searchlight-style lighting will be replaced by banks of flat lighting panels atop the Illumination Tower, in the Niagara Gorge and in a new location atop Table Rock. A total of 12,600 LED lights will replace the current 21 spotlights.

The difference between the two technologies is like comparing a 1950s-era television to the flat screen TVs of today. The new lights will shine twice as much light on the falls as the ones they are replacing.

"It's a completely different technology. It's a major changeover of the lighting of the falls," said David Adames, chief operating officer of the Niagara Parks Commission in Ontario. He is also a member of the Illuminations Board, a binational committee which oversees the lighting of the falls. Both countries are equally sharing in the cost to upgrade the decades old lighting.

Throughout history, entrepreneurs and government agencies have sought to extend the time to view the falls into the night, but it wasn't until the the Illuminations Board was formed in 1925 that lights were consistently shone on the falls.

The lights are on every night, and the Xenon bulbs must be replaced every 1,900 hours of use, according to Ecco Electric of Ontario, the company that is custom-building the new fixtures. Adames said the LED bulbs will last 20 years or longer. They will also consume less electricity and the computerized system will give operators more lighting options.

Adames said currently they use colored gels on the Xenon lights and are limited on color combinations, but the new lights will allow them to have any color of the spectrum, as well as varying shades of those colors, and programmable lighting displays .

"We realize we are lighting a world icon. This is about illuminating the falls to accentuate the falls," said Adames. "We will choose the color palettes very carefully to reflect colors that are seen in nature." 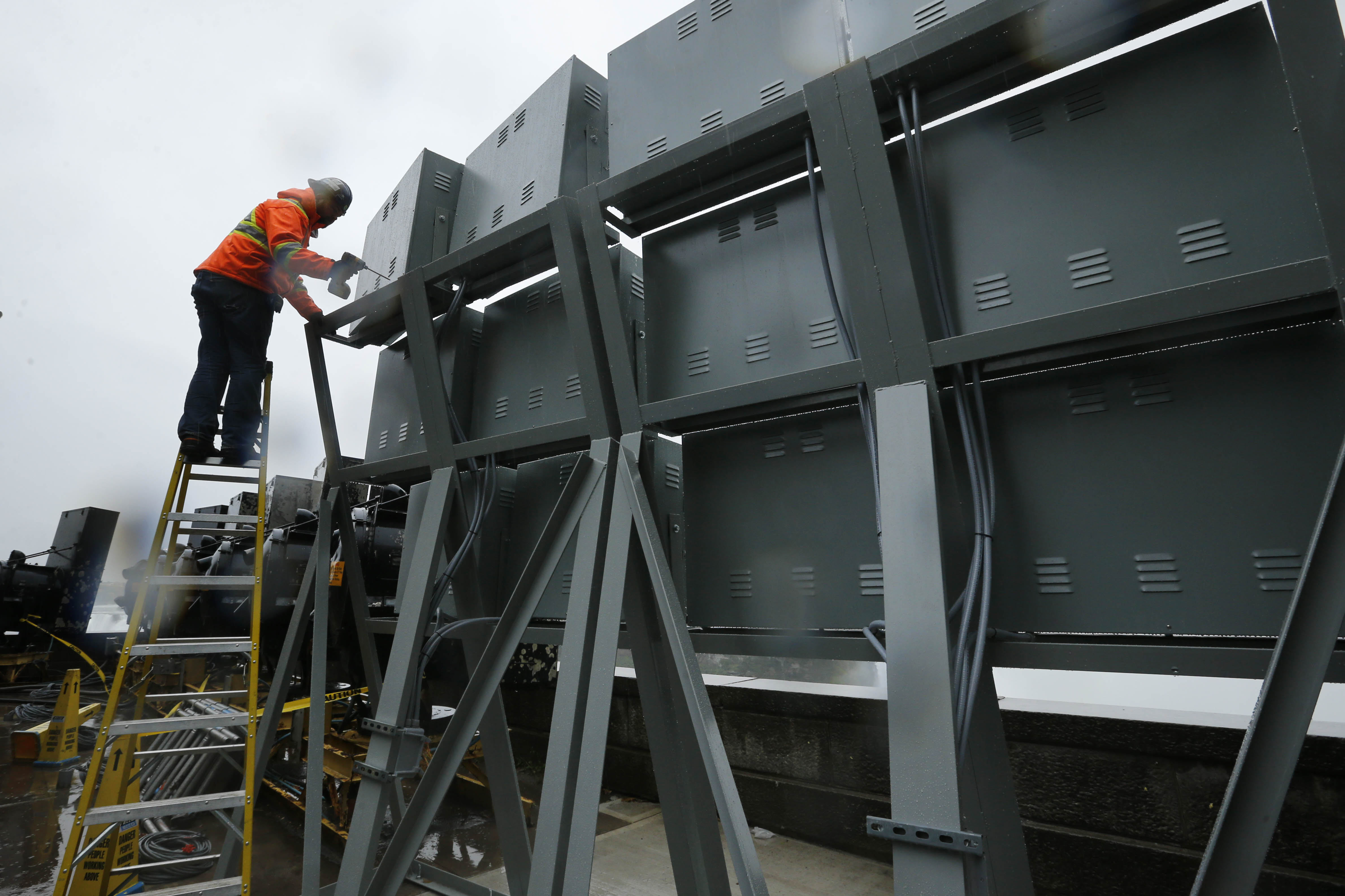 Ryan Salminen, with Ecco Electric, wires a bank of new LED lights that will illuminate Niagara Falls at night. The lights were being installed at the Niagara Falls Illumination Tower in Niagara Falls, Ontario, on Thursday, Oct. 27, 2016. (Derek Gee/Buffalo News)

A total of approximately 20 million people visit both the United States and Canadian sides of  Niagara Falls each year, but according to tourism statistics only one third to half of that number stay overnight. Leaders on both sides of the border hope more visitors will remain overnight if there's a spectacular view of Niagara Falls that can only be seen at night .

"Enhanced lighting will provide a richer experience for patrons who visit here after the sun goes down," said Mark Thomas who chairs the Niagara Falls Illumination Board and is the western district director of the New York State Office of Parks, Recreation and Historic Preservation. "We anticipate a more robust lighting program will help encourage a longer stay."

"A lighting program will also encourage those who have been to Niagara Falls before to come back," added Adames. "The falls looks different at different times of the day and in different seasons."

Adames said that the lighting will be more consistent and directed and won't spill over beyond the falls on the American side, as searchlights can often do. They will also be able to light the rim of the Horseshoe Falls, beyond the mist, which is something Xenon lighting is unable to do.

The falls will remain lit through the construction period and will be officially unveiled at 6 p.m.  Dec. 1.

"We will be keeping the old lights in as long as we can, but we will also be programming the new lights to look like the old lights until we go full board on Dec. 1 with all of the lighting capacity," said Adames.