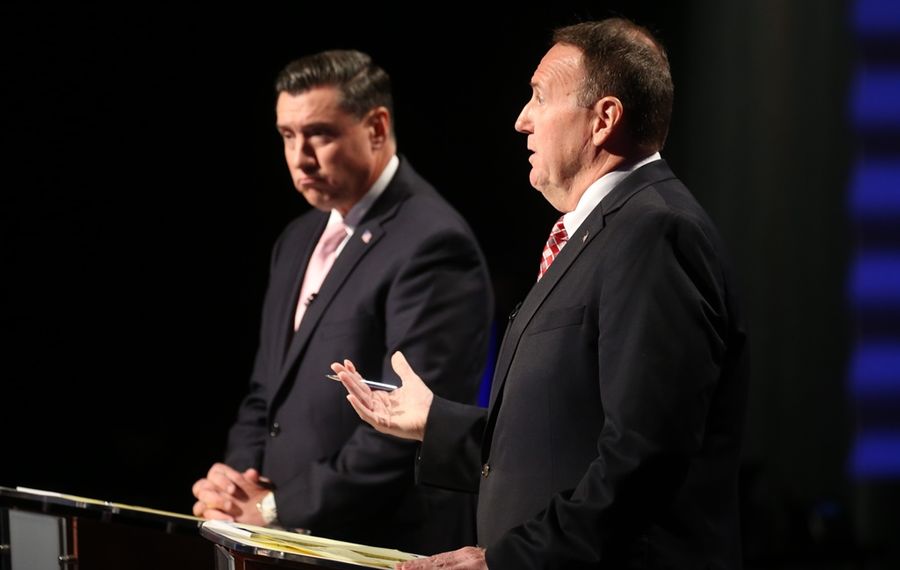 John J. Flynn Jr. said again Thursday that if elected Erie County district attorney, he will begin a criminal investigation into the death of a Holding Center inmate who was likely suffocated by jail deputies.

Joseph V. Treanor III, the other candidate in the race, refused to say what he would do on the matter if elected because, he insisted, it’s improper to comment on a potential criminal proceeding.

The candidates’ contrasting opinions on the case of Richard Metcalf Jr. came during a televised debate sponsored by three Buffalo news organizations, including The Buffalo News.

It was one of the final contests between the two candidates as both turn up the volume in the final sprint to Election Day on Nov. 8.

The state Commission of Correction, which polices jails, said in a recent report that the Erie County district attorney should open a criminal investigation into Metcalf’s 2012 death.

A medical examiner at the time determined that Metcalf’s chief cause of death was a heart attack, at 35.

But, the commission’s Medical Review Board said Metcalf was asphyxiated when Holding Center deputies knotted a “spit mask” around his neck, pulled a pillowcase over his head, placed him face down on a stretcher and prevented ambulance medics from assessing him for several crucial minutes.

Acting District Attorney Michael J. Flaherty Jr., who leaves office Dec. 31 because he lost the Democratic primary to Flynn, has yet to say publicly whether he will pursue a criminal probe. Even if he does, it’s unlikely to wrap up before the end of the year. It would be up to the next district attorney to see the matter through.

Flynn, a lawyer from the Town of Tonawanda who has served as a judge, said the Commission of Correction’s findings in Metcalf’s death deserve the district attorney’s attention, and he will investigate the matter if elected. It does not faze him, he has said in the past, that then-District Attorney Frank A. Sedita III decided in 2013 to lodge no charges against the Holding Center deputies who restrained the inmate.

“I will look into the matter if the matter is not resolved by the time Jan. 1 comes around,” Flynn said.

Treanor, who spent 28 years as an Air Force lawyer, is enrolled as a conservative but also is backed by the county Republican Party, which counts Sheriff Timothy B. Howard among its prominent incumbents.

Howard is the elected official ultimately responsible for the county Holding Center.

Treanor was more guarded about what he would do with the Metcalf matter if elected. He said he does not want to taint potential jurors by making pronouncements about the subject ahead of time.

“It is premature for me to try to inject myself into the district attorney’s job. Mr. Flaherty is the district attorney,” Treanor said, characterizing Flynn as a politician looking for a headline. “For me to start spouting off like some barnyard rooster...is unfair and it’s inappropriate.”

Flynn said that nothing in his remarks taints a jury pool or treads on Flaherty’s status.

“What it shows is that I have the leadership abilities to do this job,” he said. “I am willing to take a stand, make a decision, not be wishy-washy and answer a question directly.”

The debate was sponsored by WGRZ-TV, The News and WNED-TV, which broadcast the event. It exposed the contrasts between the candidates on pressing issues.

For example:
• The SAFE Act: Treanor called New York’s controversial restrictions on military-style rifles “inherently flawed” and said he would use prosecutorial discretion to avoid turning “otherwise law-abiding citizens into convicted felons.” Countered Flynn: “It is a dangerous path to take if you are out there as a district attorney making a determination on what laws are flawed.” He said he’ll enforce all laws on the books.

• Their backgrounds: Flynn again called Treanor unqualified to serve as district attorney of New York’s most populous upstate county. He has never tried a criminal matter in a New York courtroom, and his experience as an Air Force lawyer does not easily cross over to the criminal courts, Flynn said. Treanor dismissed the criticism by saying he was a successful prosecutor during a military career that prepared him to be DA.

• Minority hiring in the DA’s office: “The DA’s Office needs to reflect the community at large,” Flynn said. “It does not do that.” He said he’ll work with a mentoring program run by his current law partner, John V. Elmore, to find good minority candidates who will make the nearly all-white prosecutors’ office more racially balanced. On this issue, the candidates sound similar. “Absolutely I am a big proponent of inclusiveness,” said Treanor, who said he, too, would work to recruit more minority prosecutors.

• Fundraising: While Treanor is self-financing his campaign – to remain free of obligations if elected, he says – Flynn went after him for accepting Republican Party spending on his behalf, including the purchase of a television ad blitz now ramping up. The party, Treanor responded, has a First Amendment right to support its favored candidates, and he can’t control what it does. He said Flynn will be beholden to many of the lawyers who have donated to his campaign.