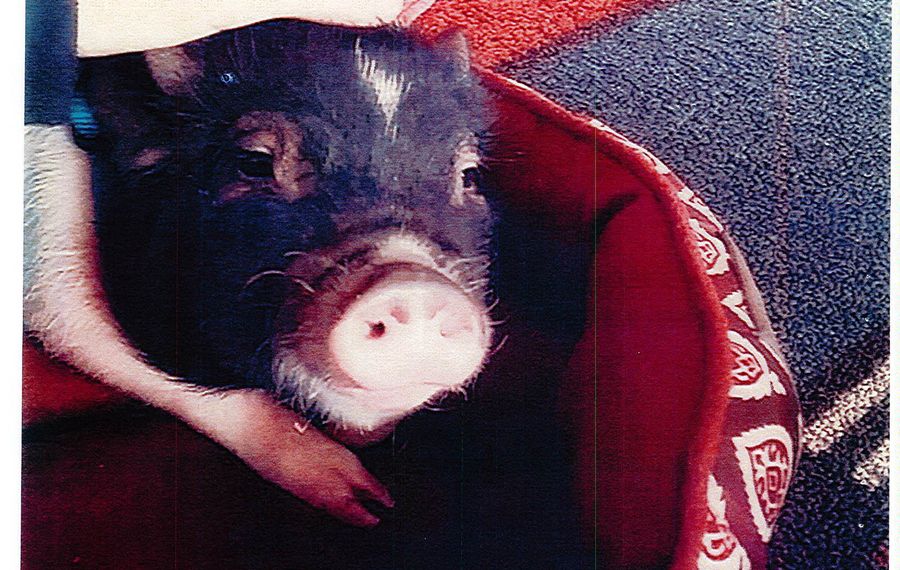 An Amherst woman is fighting this suburban town over its refusal to let her keep a small pig she bought her children as a house pet.

Mariela Vasquez sued the town, but a State Supreme Court judge last week refused to hear the case, arguing that the Coronation Drive resident still had other options to resolve the dispute.

Parts of Amherst are rural, but Vasquez lives in a modest ranch house on a typical suburban street with sidewalks, west of Millersport Highway.  The pets of choice for many of her neighbors who have them would tend to be dogs or cats, and not farm animals.

None of Vasquez's neighbors had squealed on her and her pet pig, Ham Solo, before she approached the town for permission to keep it. A town ordinance required Vasquez to seek permission from the Zoning Board, which she did at a scheduled hearing on July 19. That was about five months after Vasquez had obtained the pig.

"There is a provision in the zoning ordinance that doesn't let you keep livestock," said Amherst Town Attorney Stanley J. Sliwa.

"And livestock is defined, among other things, as a hooved animal. It's the same provisions that prohibits residents from keeping chickens as pets," Sliwa added.

Vasquez told the Zoning Board that she purchased Ham Solo in February to honor her children's request for a pet. She opted for what she described as a "micro pig" because, unlike a furry dog or a cat, pigs are hypoallergenic and would not exacerbate a chronic lung ailment suffered by her young daughter. At a mere 44 lbs., Ham Solo made an ideal house pet, Vasquez argued.

"Micro pigs are considered the second-most intelligent animal after the dog," she told the Zoning Board.

Despite assurances by Vasquez that Ham Solo was mostly confined indoors, was house trained, quiet and always supervised,  a half-dozen of her neighbors who also attended the hearing were not enthusiastic.

"I have a huge issue with a pig," said Michele Adamski, a neighbor. "It's not allowed in Amherst. I mean, maybe I'll get a goat."

Frank Pasztor, president of the Hartford-North Bailey Homeowners Association, insisted that granting permission for Vasquez to keep a pet pig was not appropriate for the neighborhood, calling it a slippery slope.

"There's a district for folks who want pigs as pets," Pasztor said, referring to the rural areas of the town that are zoned suburban agricultural.

"They can move out there and raise all the animals they want. I just think it's a bad idea and will set a precedent that'll be difficult to overrule in the future," he added.

Others expressed concerns that allowing Vasquez to keep a pig in her home would lower property values and that the pig's dropping would attract rats.

In the end, the Zoning Board denied Vasquez's request for a use variance, which would have been tantamount to a permanent exemption from the town's ordinance barring pigs and other livestock from being kept in a residential area. The board's denial of her request  prompted Vasquez to file a lawsuit to have the Zoning Board's decision overturned. However, when it got to court last week, State Supreme Court Judge Diane Devlin declined to hear the case on the grounds that Vasquez still had the option of seeking a special use permit.

The Zoning Board has, on occasion, granted special use permits to those seeking to raise chickens in residential areas of the town, always for a limited duration and often with special conditions.

Vasquez may seek to pursue that option.

She declined to consent to an interview, but a spokeswoman for Nixon Peabody, the law firm Vasquez hired to represent her, issued a statement. "We are disappointed that the Court granted the motion to dismiss on procedural grounds and did not reach the merits of the petition, but are hopeful that once the (Zoning Board) reviews Ms. Vazquez’s application for a special use permit, the (Zoning Board) will conclude that the Vazquez family should be able to keep Ham Solo,” the law firm said.

Dr. Louis Budik, a veterinarian at Transit Valley Animal Hospital in East Amherst, treats a variety of pets at his practice. Among them is a breed of small pig, alternately referred to as a mini pig, micro pig or teacup pig that, fully grown, generally does not exceed 50 lbs. in weight.

"These are not pigs that you might see in a production facility on a farm that weigh around 220 lbs. These are small pigs and they're very conducive to living in a home. They're domesticated. They're pets, much like a cat or a dog," said Budik.

"In our practice, we seem to be seeing more of them recently. About 20 years ago, they became very popular. They were sort of a designer animal that was introduced in this country, but the breeding got out of hand and they just got too big. Many of them were just way too big for being in a home," he added.