Get your selfie-sticks ready, Buffalo.

There's a new mural in town, and it is almost ready to compete for your Instagram-fueled affections. Casey William Milbrand expects to complete his picture-postcard mural on the south wall of the Washington Market at 461 Ellicott St. this week.

The piece, funded with $6,500 in crowd-sourced donations, practically glows with Buffalo pride. It depicts a 12-pointed sun rising behind a red and purple skyline against a graphic background of blue squares. At dead center is the word "BUFFALO" spelled out in bubble letters, complete with a heart in the center of the "O." On the right, a red Buffalo heads out of the frame, as if on his way to explore the city.

Much like the perpetually upbeat Milbrand, the mural gives off an air of boundless optimism and possibility about the city. It also mimics the vibe of unbridled "Buffalove" on display in the storefront space and Buffalo-themed Airbnb Milbrand runs with his partner Jason Lloyd Clement on Grant Street.

"We need something that’s going to welcome people to our city and I’m just hoping this becomes the place where people come to take their photo," he said during a short break from painting on a chilly Monday afternoon.

In a culture obsessed with instant photo-sharing, the postcard mural has become a common feature in American cities on the rise. The trend can be traced back at least to 1998, when the much-photographed "Greetings From Austin" mural was painted in Austin, Texas. 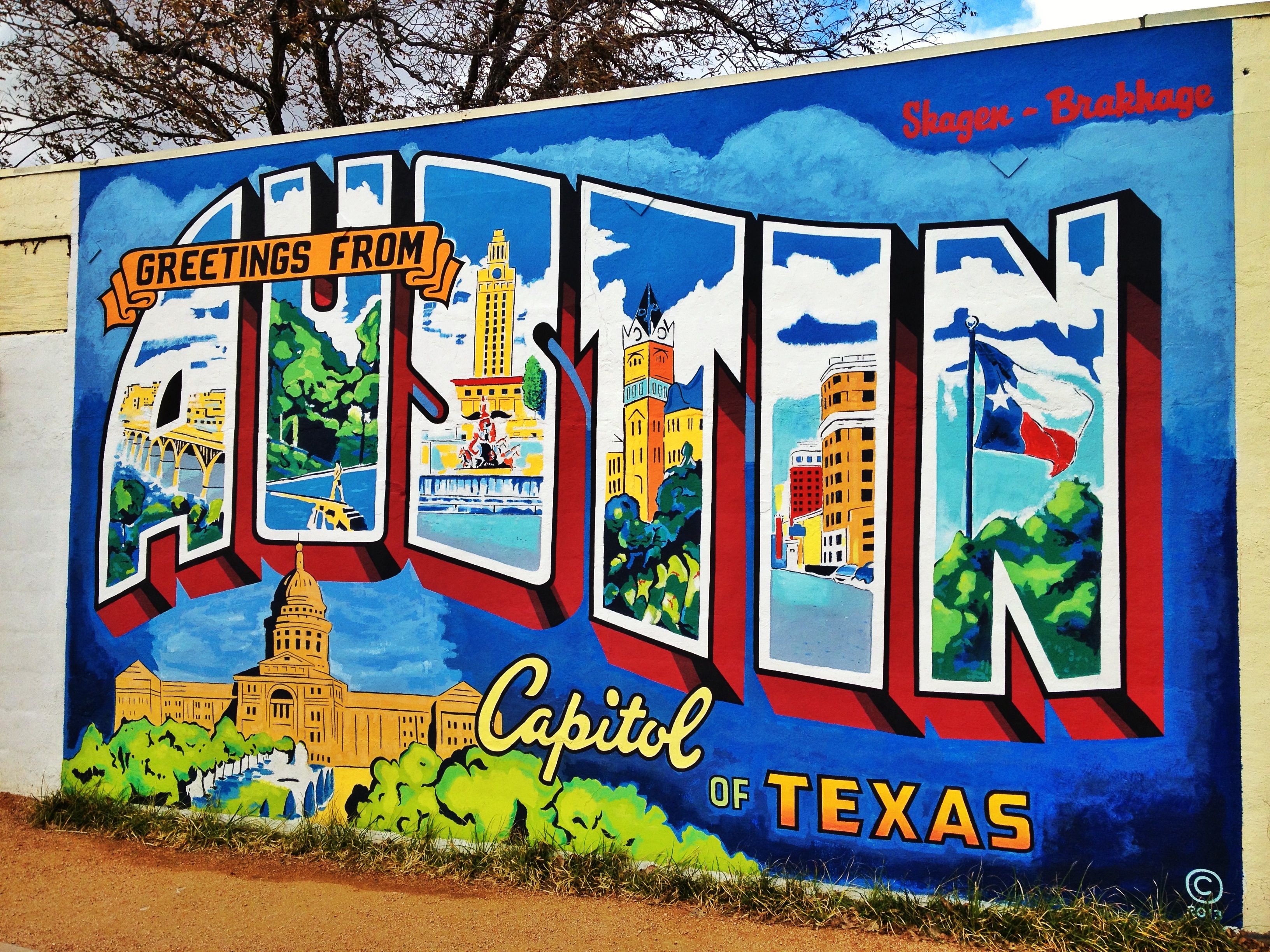 The "Greetings from Austin" mural in Austin, Texas, has been attracting explorers and photographers since 1998. Photo via flickr.com/photos/jimnix.

Since then, such photo-op murals have proliferated in cities across the United States, especially those eager to parlay their homegrown pride into a marketable commodity. That includes Niagara Falls, where a "Greetings from Niagara Falls, New York" mural was painted recently as part of the city's "Art Alley" project. 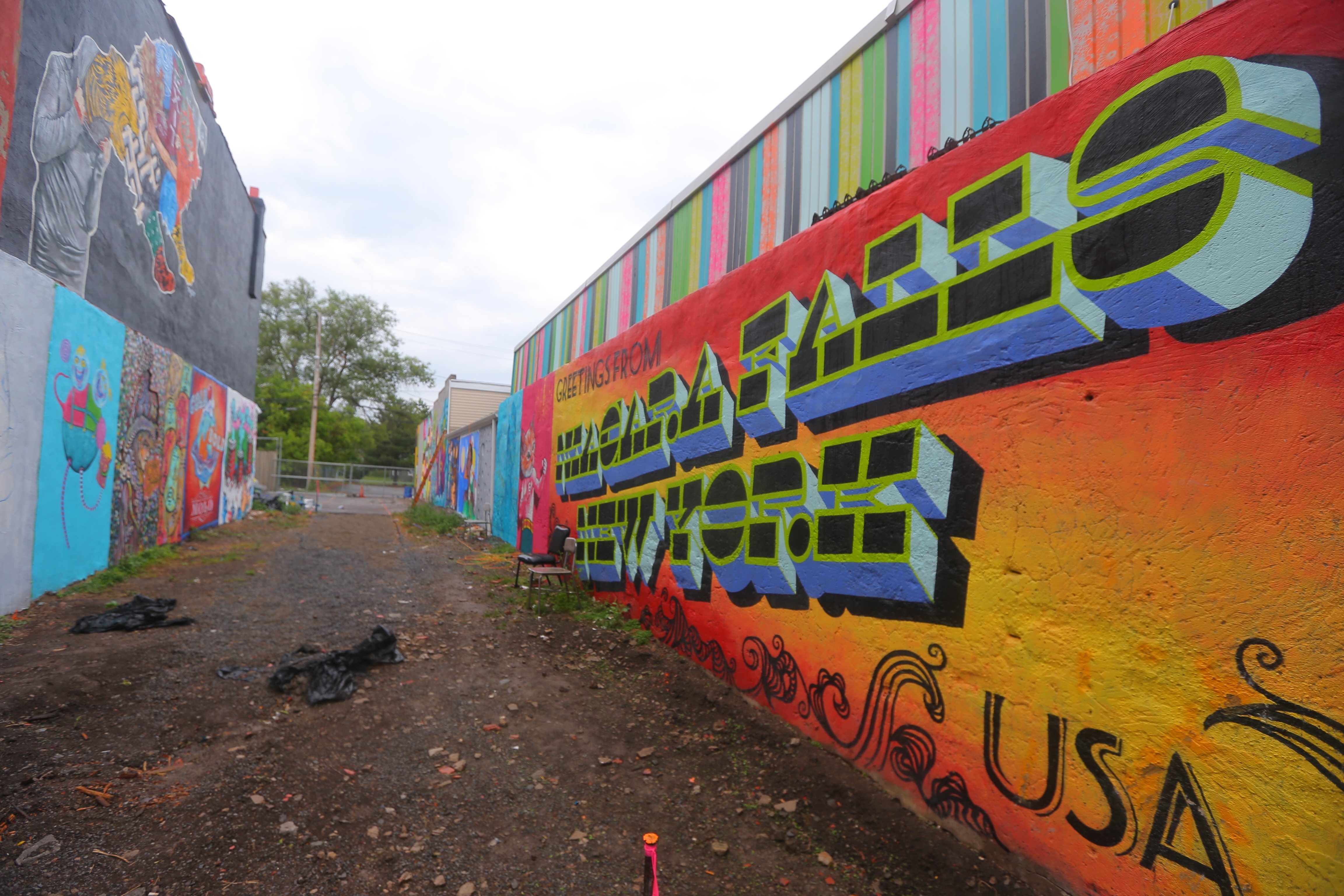 The reception has already been positive for Milbrand's mural, with dozens of people stopping to take pictures and flooding Instagram with shots of the artist's progress.

"People have been kind of cheering me on," Milbrand said. "I have moments like, why am I doing this? It’s cold and there’s times I’m here until like 4 in the morning, maybe. And people just stop their cars, roll down their windows and say, ‘It’s beautiful!’

Dressed in several layers of paint-spattered clothes, Milbrand marveled at the friendliness of passers-by, who have given him constant encouragement since he started the project.

"What’s nice is we live in a place where people actually take the time to compliment me, even though I look like a crazy person," he said.

For Washington Market manager Michael Khoury, the mural adds a much needed sense of vitality and beauty to the historic Ellicott Street corridor.

"I think it's beautiful," Khoury said. "It's nice to have it here for us, but overall it's helping to beautify the city, which is really the important goal here."