GratefulWeb.com recently called Turkuaz "the best and hottest funk band in the world at this moment," and if you've ever witnessed the energetic nine-piece power-funk ensemble in concert, you quite likely agree.

When it comes to funk - even forward-looking, highly creative and genre-stretching funk of the sort that Turkuaz makes - you're only as good as your drummer. The other eight members of Turkuaz surely know how blessed they are to call Buffalo's own Michelangelo Carubba - a member of that family you hear Rick Jeanneret hollering about during Buffalo Sabres games - the heartbeat of their band.

Carubba is a powerhouse drummer with a startling command of dynamics, and he is most assuredly funky as all get-out. I caught up with Carubba to chat about life on the road, his already infamous annual birthday bashes and Buffalo's status as a decidedly funky town. Turkuaz plays Oct. 28 at Buffalo Iron Works with Imperial Brown.

Q: How do you think New York City influenced the sound of the band, if it did?.

A: When you're starting out as a band in New York City, you're a needle in a stack of needles. To be heard and remembered, you need to create a unique sonic and visual aesthetic, and we've been focused on that since the very beginning with the help of our visual director, Dani Brandwein.

Not many young bands even have a position like that on their team, but for us, it's been one of the most important strategies for rising to the top. Also, a million honking horns and a seasonal smattering of funky smells make me play the drums a little harder and with a little more stank.

Q: These musical birthday parties you’ve been throwing for yourself over the past few years in New York City sound like they’re totally bonkers. Tell me a few of the highlights.

A: My whole idea with throwing these birthday shows is to provide a concert experience that reflects my time spent on the road and the relationships I've built along the way. This past year at the beginning of the show I opened it with Robert "Sput" Searight and myself just improvising on the drums together.

When we sat down next to each other at our drums, I just looked at Sput and thought to myself, "Jesus what have I gotten myself into?" I mean this is a guy who has played with everyone from Snoop Dogg to Kirk Franklin, has multiple Grammys under his belt with Snarky Puppy, just came off doing a ton of work on Kendrick Lamar's "To Pimp a Butterfly," and he's flown all the way from Dallas to Brooklyn to sit next to me and play music.

It's enough to make your head fall off your shoulders. But he just looked at me, smiled, and whispered playfully "Alright Michelangelo, let's play." I'll never forget that moment. 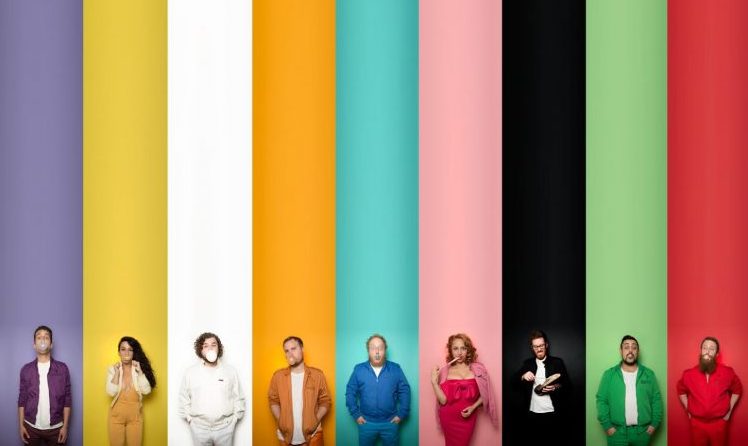 Q: Tell me what it’s like keeping a big ensemble like Turkuaz on the road in the present day?  How do you keep it going, considering that the old days of label tour support and hoping to sell lots of records and make publishing money are in the past?

A: The touring business operates on an economy we call "Tickets and T-shirts." That's how we all put food on the table. The days of huge record contracts and selling millions of albums are over for 99 percent of music acts, so constant touring and playing great shows are they way we sustain and grow.

We are working 17-18 hour days on tour, when you include the driving, load ins, load outs, sound checks, radio interviews, etc. We work tirelessly for every dollar we earn, and in our crew of 12, that pie gets split up quickly. And personally, we just love each other, so that side of it has always worked out very easily.

Q: Buffalo has a long, deep funk tradition, going back to Dyke & the Blazers, and running through Rick James and straight up to the present. Why do you think that is? Is Buffalo funky, in your view?

A: Buffalo is absolutely a funky town. There's all kinds of different people. Diverse neighborhoods. Cultures. Stories. But Buffalo is a place where the shared experience of seasonal changes, historic sports moments, a deep food culture, actually make us all one.

Being able to weather a horrible winter followed by losing your fourth Super Bowl in a row, all the while having a great sense of humor, is a badge of honor all Buffalonians wear proudly. It makes us walk taller, dance a little harder , and funk with the best of them. Just ask the Evans Brothers. (Neal and Alan of Soulive.)

Q: Do you feel part of a movement, one where we’re seeing fans who might have been more strictly jam-band people opening up to funk and hip-hop and jazz, and you can now go to a festival and hear all of these kinds of bands on one bill?

A:  I like to think, and have heard from fans and taste-makers alike that were part of the forefront of that movement. Bands like us, Lettuce, Snarky Puppy, Nth Power, Ghost Note, The Motet, Break Science, are all bands that are showing people a kind of music they didn't even know they liked until now. Even if it's been under their nose for years.

And the better part about being at the forefront of that movement is the community that it's creating and the collaboration that's been happening between all these acts. If you look at the rosters from my birthday shows the last two years, almost every one of those bands have (a few of) their members on stage with me. That's friendship and a shared vision and shared joy of music making. Collaboration. That's dope.

Who: Turkuaz and Imperial Brown