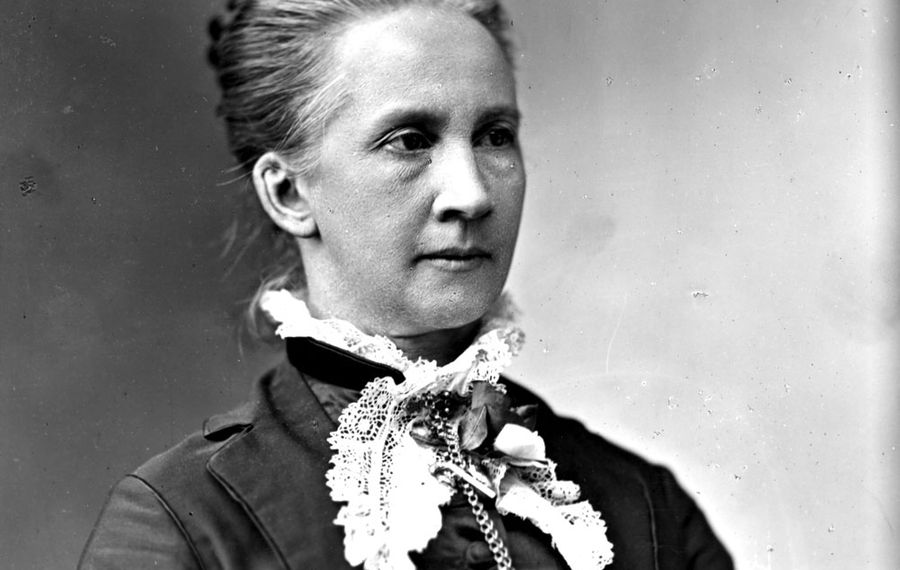 That woman was Belva Lockwood.

Born poor and without any real prospects in rural Niagara County, through necessity and a strong sense of self, Belva Lockwood went from a farmer’s wife to the leading women’s rights advocate to first female presidential candidate.

Western New York was the American frontier when Belva Bennett was born in a log cabin in the Niagara County Town of Royalton in 1830. The daughter of a farmer, she married a farmer at 17. When her husband died a few years later, she — against the advice of friends and family — went to Genesee College so she could support her young daughter by becoming a teacher.

Returning to Niagara County with a degree, she was offered a teaching job in her native Royalton.  She refused the job after only being offered half the salary of the men who were doing the same job.

She eventually accepted the role of preceptress at Lockport Union School, where she began administering her belief that boys and girls should receive the same education. “Much indignation was aroused among many of the prim folk in the village,” it was written in one Niagara County history. She was called “that crazy teacher,” and efforts to have her fired were blocked by female students and their families who supported her.

She was still being paid less than her male counterparts, and that didn’t sit well with Lockwood.

Although already a dynamic speaker and very active in the equal rights movement, she thought she’d be a more effective voice for equality if she became a lawyer. After several rejected law school applications, the National Law School in Washington welcomed her as a student. 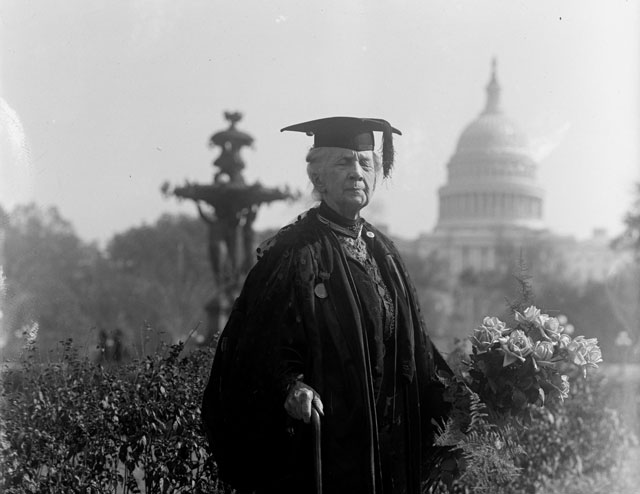 Belva Lockwood poses in front of the U.S. Capitol in 1915. (Library of Congress)

After a struggle to get the diploma she had earned certified by the college, she was finally admitted to the bar in 1873 and began work in the courtroom and as a lobbyist. Among her early accomplishments were convincing Congress to pass a law mandating that the federal government pay men and women equal wages for the same type of work. Another law she lobbied for allowed mothers to have custody rights equal to fathers.

It was national news when she lobbied Congress to pass a law allowing women to argue before the Supreme Court. She was successful and, indeed, became the first woman to argue a case before the nation’s highest court. For 13 years, she never missed a weekday in court, and was always, she said, “treated like a gentleman” at the bar.

Clearly being the only female practicing attorney in the nation’s capital would have garnered attention, but Lockwood’s style added to her renown. She caused an uproar by becoming the first woman to ever ride a tricycle on the streets of Washington, using the newly invented machine to get to and from court. She said the tricycle was “just the thing” she needed to avoid the walk home after a long day, adding that the men of Washington “shouldn’t have all the fun to themselves.”

In 1884, at the San Francisco convention of the Equal Rights Party, Lockwood was nominated for president of the United States. The nomination came 36 years before the Constitution was amended to guarantee women the right to vote, but Lockwood’s campaign was vigorous, if not successful. Another Western New Yorker, Grover Cleveland, ultimately won the race.

Jokes and puns about Lockwood and the fact that she took up smoking a pipe during the campaign took up more space in The Buffalo Evening News (and most newspapers) than her ideas for women and the country. 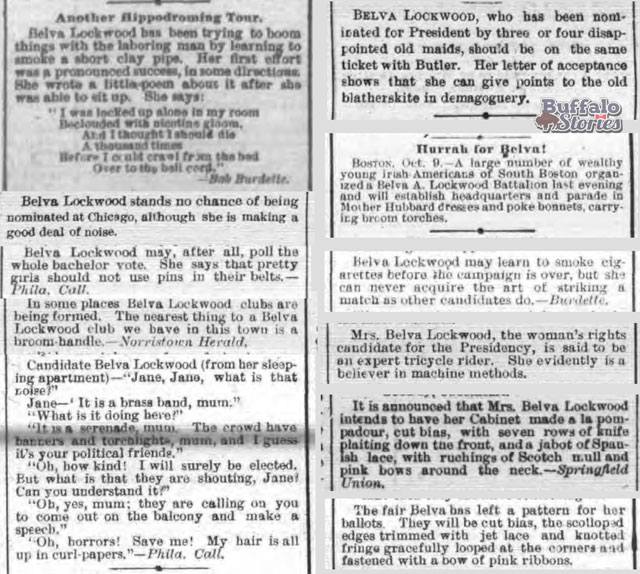 The Buffalo Evening News’ coverage of Belva Lockwood’s Presidential campaign was dismissive (above), but coverage in the Buffalo Times (below) was nasty.

A straw poll was taken on the train ride between Gardenville (West Seneca) and Buffalo in the runup to the election. It was no surprise that Buffalo’s adopted son Grover Cleveland led with 200 votes, Republican James Blaine with 47, and Belva Lockwood with six.

Lockwood ran again in 1888, and while the jokes continued, this time her message received more attention.

Presidential candidates Grover Cleveland, Benjamin Harrison and Belva Lockwood all enjoyed some manner of sport, as reported in the Buffalo Evening News, 1888.

While most editorializing in The News and most papers was slanted against Lockwood, The News did run a two-column interview with the Western New Yorker called "Belva Lockwood at home," complete with a drawing of her. 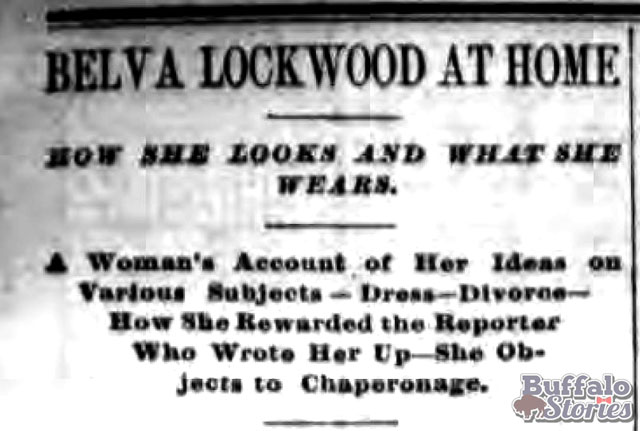 “She possesses an indefinable good humor and gentle goodwill, not unmixed with an old-school grace that is winning rather than remarkable.”

“She does not pretend to style in dress, never did, but there is none of the soiled tawdryness of attire of some gentlewomen who utterly repudiate her view, neither the aggressive masculinity which many of her own school of thought affect.

“She has all her life been a scholarly, intellectual woman from choice, the instinct—as so many leading instincts are—prenatal, the result of a mother’s yearnings in that direction during the year of her baby’s birth. In her girlhood she was accustomed to have exalted periods of mentality, in which arguments and philosophies of life and humanity would work within her without any apparent cause or assistance. Many a time has her mother’s gentle ‘Belva Bennett’ brought back her dishwater or her needle from these transports.

“She says this particularly masculine calling has been easy work for her, her instincts being all argumentative and judicial, and a fluent speech serving as a useful handmaid in their expression.”

Acknowledging that many men and some women looked at her candidacy as a joke, Lockwood told the interviewer that her goal was not tied to her ambition to live in the White House, but to call attention to the plight of women and to grab the attention of other women from her bully pulpit.

That joking — some of which is reprinted above — never much bothered Lockwood, save once. One Washington reporter was “particularly fresh” about her in his column, so she rode her tricycle — which the writer had called “a ridiculous machine” — over to the paper to speak with him.

“Amid the nudges, punches and winks of ‘the boys,’ she was assured that the young writer had just stepped out, would be gone for a week, won’t be back til next month,” reported The News. She fulfilled her intention in the visit anyway and left the scribe flowers and a note “commending his cleverness, but wishing him success in better business.” The writer was never “fresh” again.

Lockwood’s argument against chaperonage — the idea that a woman needs to be supervised and tended to by a male relative — was radical when it was written in The News in 1888, but it’s something she fought for until she died in 1917.

“She objects to chaperonage, or rather the necessity for it, claiming that there is such a thing as training boys and girls with an equal sense of moral responsibility, self-control and desire for the good of the race,” so as to make chaperonage unnecessary.

The legal and moral idea of a woman needing a chaperone died long ago, but the rest of what she talked about there — the notion of the equal training and treatment of boys and girls — remains a topic of discussion 128 years and 32 presidential elections later.