TORONTO – For the work of glass artist Dale Chihuly, the word “cool” seems most appropriate.

Not only did the Lime Crystal Tower in the Gloria Chen Court, at the Royal Ontario Museum’s Bloor Street entrance announce to all that something cool was happening here, it’s how I felt observing the light reflecting off of more than 100 lime-colored crystals making up this tower. The crystals in this tower are made of Polyvitro, a plastic lighter than glass that Chihuly uses on occasion enabling him to build large scale, transparent structures.

In the museum’s Garfield Weston Exhibition Hall, the cool sensations continue, where Chihuly runs until Jan. 8. And after noticing the introductory tower, many will begin too muse, wondering what actually awaits them here.

In the PBS documentary “Chihuly Fire and Light,” architect Frank Gehry said Chihuly had “a glass language nobody else has. Kind of like jazz. And he translates that language to the kids he’s working with. And he’s playing.”

Playing is the operative word when considering Chihuly.

Observers delight in the playfulness of it all. They pose for pictures and take countless selfies by the large-scale creations, spurred by a Chihuly installation team.

Born in the Pacific Northwest, Chihuly was influenced by Native American culture and inspired by nature. An early inspiration was seeing fishermen keeping their boats afloat and finding small glass fishing nets on Puget Sound. Above the Ikebana Boat he’s quoted , “Glass is so much like water, if you let it go on its own when you work with it, it ends up looking like something from the sea.” 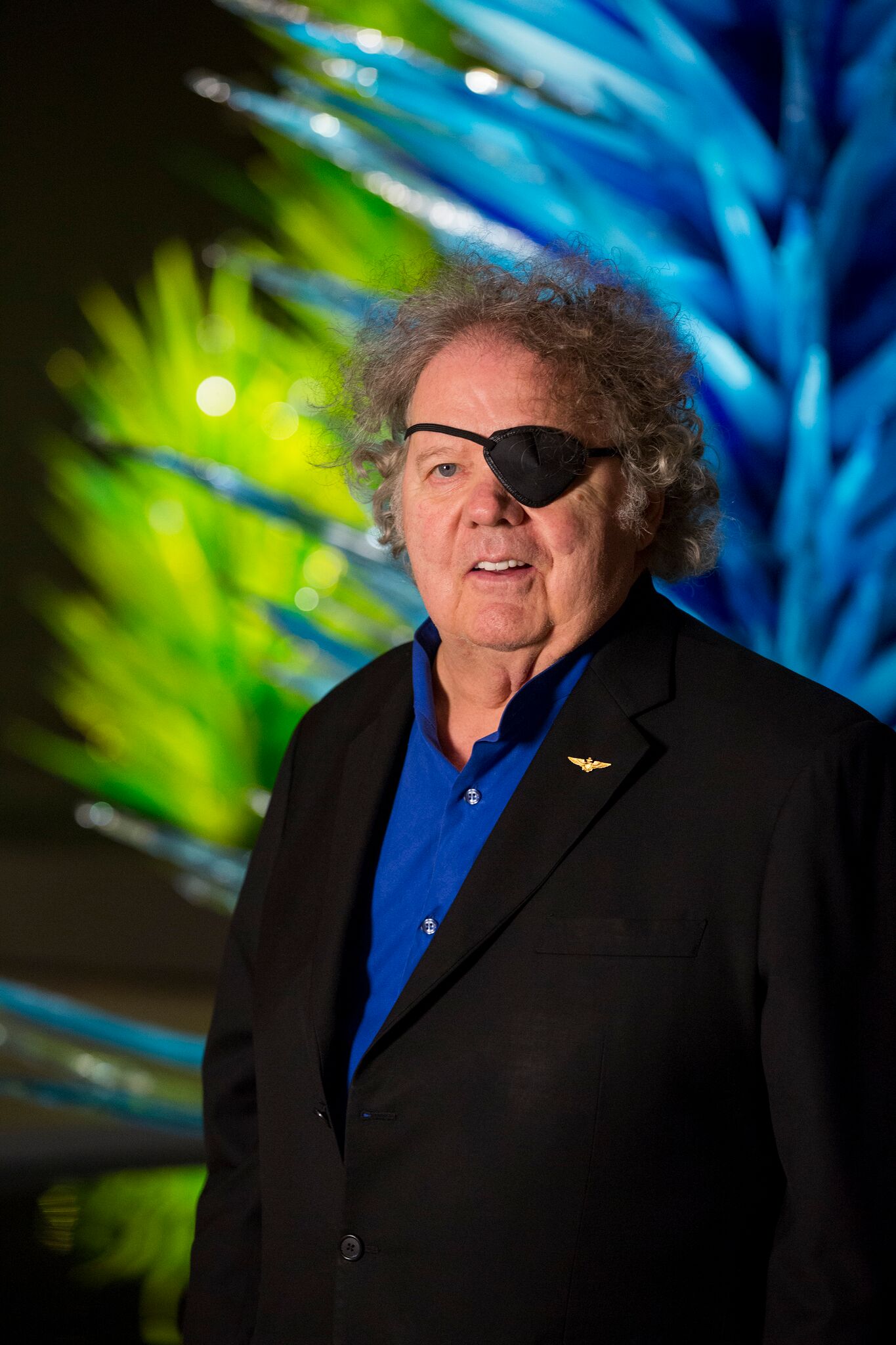 He’s studied and traveled throughout the world, developing a scale defying glass’ fragility, and often labeled monumental. Initial university studies included interior design and architecture. Then the University of Wisconsin’s glass program, the nation’s first, called. Thereafter the Rhode Island School of Design beckoned, where he started its glass curriculum, teaching there for several years. In 1971 he co-founded the Pilchuck Glass School in his native Washington. Four years later, he served as an artist-in-residence at Artpark in Lewiston.

Though auto and surfing accidents caused Chihuly to give up glassblowing years ago, he’s achieved recognition for expanding glassblowing into art. These days he creates images he converts into sketches, translates them to “the kids he’s working with,” and what emerges, appearing in more than 200 planetary galleries, are some of the most dazzling objects eyes have ever seen.

The Laguna Torcello installation fits into the immense category. It’s part of his Mille Fiori series, a “thousand flowers” in Italian. There are more than 2,500 forms, flowers and floral objects in this massive glass garden. Named for a lagoon island in Venice, Italy, it honors Venice’s glassmakers. It’s an exhibit favorite, inviting visitors to take it all in by repeatedly strolling around its oblong layout.

The Red Reeds on Logs 2016, also created for the Royal Ontario, was inspired by high ceilings Chihuly encountered at a Finland glassblowing factory, with some reeds 3 meters high. For this exhibit, he used Ontario white birch logs. The reeds are so vibrant, plentiful and colorful they evoke nature, sprouting effortlessly from the logs, looking like candles, too numerous to count, atop a white iced cake.

Chihuly chose a theme of icicles for the Canadian exhibition. Whether his choice was determined by the locale, and its weather, is not known. But brilliant colors unfold in the icicle towers and chandelier. Hundreds of pieces of blown glass comprise these works, built around steel frames, and they reflect light that is cast upon them.

When it comes to glass art, Chihuly is continually expanding boundaries. Consider that his penchant for veering from glassblowing convention dates to 1977 when he began creating out-of-the-ordinary, asymmetrical baskets. Inspired by a museum displaying Native American baskets that were bent out of shape by gravity and time, Chihuly produced similar effects in glass, with unusually formed baskets whose functionality previously depended on symmetry.

Fire Orange Baskets 2016 made for this exhibit are among his largest, which also includes baskets from his personal collection. Dozens of baskets are on hand, some resulting from Native American exposure, others stimulated by images on blankets made by Pendleton Woolen Mills and other companies.

The Royal Ontario Museum (ROM) is on the southwest corner of Bloor Street West and Queen’s Park Avenue.

There is an additional charge ranging from $7 to $12 to attend the Chihuly exhibit, through Jan. 8.