Not long ago, the wicked hit would have been featured in highlight reels for the next week.

Damn, bro, you see that play? Aaron Williams got JACKED UP!

What happened to Buffalo Bills safety Aaron Williams with 6:06 left in the second quarter against the Miami Dolphins was, for me, unentertaining and made the rest of the game not worth watching.

There's a backstory here: Williams suffered two neck injuries last season. After a diving tackle in Week Two, he couldn't feel the left side of his body and departed Ralph Wilson Stadium in an ambulance. When he came back in Week Five, parts of his body went numb. He underwent surgery and wondered if his career was over. He returned for training camp, where a collision with Bills receiver Dez Lewis gave Williams a concussion.

On Sunday, for the second time in Williams' past nine games, an ambulance whisked him from a stadium to the hospital.

Williams was on his back, writhing and screaming. The reaction was chilling enough to make his cocky assailant, Dolphins receiver Jarvis Landry, stand there in stunned silence with the play still blurring around them.

Landry delivered a reckless crackback block, the type that used to make us instinctively leap from our seats and roar.

Landry lined up wide left at the 11-yard line and veered at Williams on a run play to the left. Williams, his eyes on Dolphins back Jay Ajayi, didn't see Landry shooting toward him. Landry could've hit Williams cleanly, but launched his helmet and left shoulder into Williams' face.

Officials penalized Landry 15 yards for unnecessary roughness. The Dolphins kicked a field goal and life went on for pretty much everybody in the stadium not named Aaron Williams.

That's when I stopped watching.

Not permanently, mind you. Not yet anyway.

Sure, NFL players make a nice living playing a game and know the risks more than ever.

And we know what we're witnessing more than ever. 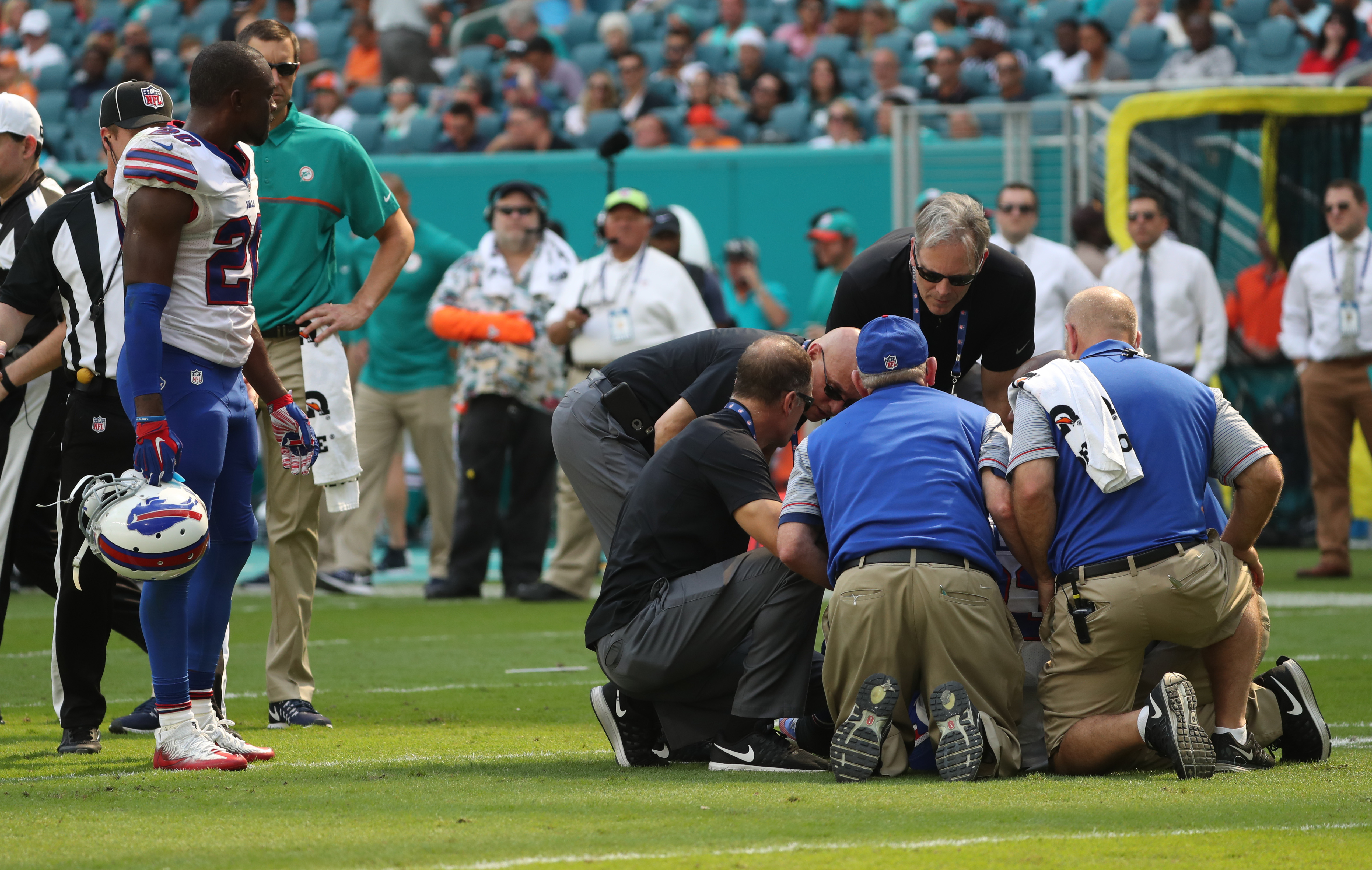 The cost of glory is steep. While at the Pro Football Hall of Fame's induction weekend in August, I introduced myself to legendary Dallas Cowboys running back Tony Dorsett in a hotel lobby. He didn't speak. His handshake was limp. A woman alongside him offered him a piece of chocolate. He took it and stared off.

Hall of Fame guard Joe DeLamielleure was nearby.

DeLamielleure and Dorsett have participated in tests that indicate they have chronic traumatic encephalopathy (CTE), the degenerative brain condition scientists believe is caused by the kind of repeated head trauma football entails.

A common sentiment from knuckle-dragging fans is that empathy for the injured is one more sign of America's wussification. Just give those crippled and addle-brained former players a piece of candy and let us enjoy our sports.

The Bills-Dolphins game remained on my television. I was aware the Dolphins scored 22 straight points in the second half to win, that Ajayi was as gentle on the Bills' run defense as a rusty bone saw.

I noticed when Bills receiver Marquise Goodwin sprinted for a 67-yard touchdown in the third quarter. And I noticed when the back of Goodwin's head bounced off the Hard Rock Stadium field. He lay motionless for too many uncomfortable seconds before regaining consciousness.

A look at the game book shows injured running back LeSean McCoy shouldn't have played, outside linebacker Lorenzo Alexander picked up a sack in his seventh straight game, rookie pass-rusher Shaq Lawson recorded a sack in his debut and Brandon Tate had a terrific day on special teams.

All of it was eclipsed by what happened to Aaron Williams.

For the record, Landry's penalty was his second 15-yarder Sunday. He was cited earlier with unsportsmanlike conduct for spinning the ball on the Bills' sideline to celebrate a nice reception.

People wonder why the NFL's television ratings have withered as other sports leagues trend upward.

An easy reason to fathom is how a vicious play, threatening a man's livelihood, can jolt a lifelong fan straight out of a diversionary sports moment he's been looking forward to all week.

The game ceases to be entertaining when contemplating ethics and mortality.

Landry's thump -- and it's not merely Landry; these plays happen all the time around the NFL -- might have ended Williams' career on the spot and could cause long-term neurological problems. 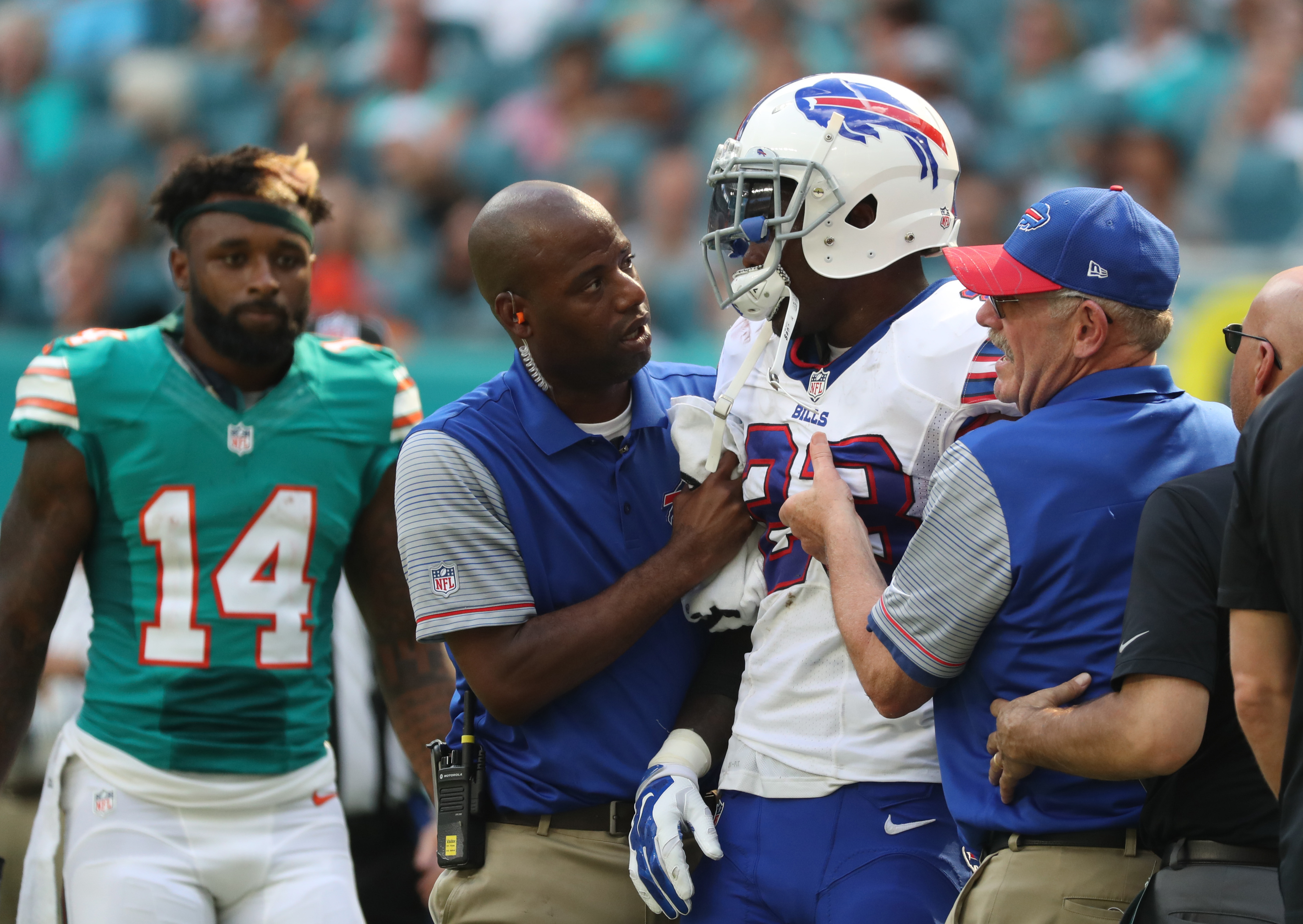 Buffalo Bills strong safety Aaron Williams (23) is helped off the field after being hit by the Dolphins' Jarvis Landry (14, at left). (James P. McCoy/Buffalo News)

Not until 2010 did the NFL reword Player Conduct Rule 12, Article 7 to prevent someone from launching himself helmet-first into a defenseless player's head or neck area (2010!) and to whistle a play dead when a ball carrier loses his helmet (2010!).

In December 2011, the NFL was compelled to publicly clarify what constitutes a defenseless player.

And just last year, a receiver who "is clearly tracking the football and is in a defenseless posture" after an interception or potential interception was granted 15-yard protection.

You're not allowed to target those guys in the head or neck anymore. Imagine that.

When I expressed some of my thoughts on Twitter during Sunday's game, a majority of respondents agreed the NFL is becoming increasingly uncomfortable to watch.

I also received feedback that distorted my perspective. Some sarcastically asked if we should go ahead and ban the NFL.

Fans can watch whatever they want, all they want. The NFL isn't going anywhere.

And I'll be in the New Era Field press box next Sunday for Buffalo's game against New England.

How will I handle it? Hopefully, carnage won't darken the entertainment. But I can adjust.

After all, a younger me spent work shifts listening to police scanners, dreading a fire or a homicide alert.