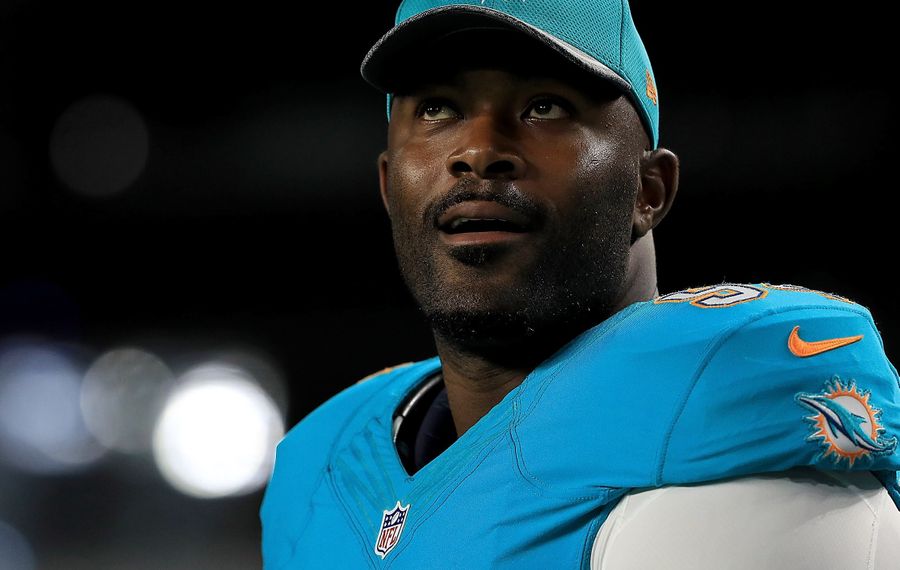 DAVIE, Fla. − Everyone chooses their words carefully when it comes to Mario Williams. Publicly, teammates rave at his physical abilities − a 6-foot-6, 300-pound force of nature. Privately, they wonder how a man of his stature can disappear so easily.

Six weeks into his first season with the Miami Dolphins, the same questions that were asked of Williams in Buffalo are now being asked in South Florida. Namely, is he trying? Does he care?

That type of criticism has followed a player who, right or wrong, has become the face of the Buffalo Bills’ defensive shortcomings in 2015. Williams’ relationship with Bills coach Rex Ryan turned sour last year amid complaints about the way he was being used, memorably moaning about being asked to drop into coverage.

With each passing week, it became more apparent that the Bills and Williams were heading for a messy divorce. That was finalized March 1 when the team released him with two years left on the six-year contract he signed before the 2012 season.

That wasn’t the end of it, though. Ryan unloaded on Williams in an interview with Sports Illustrated in May.

“With some of the comments, do I wish him well? Not really,” he said. “But, he’s on Miami. If he would have gone somewhere else, maybe. He’s a good kid, but I am used to some mean (expletives) that play out there. The Terrell Suggs, Jarrett Johnsons of the world.

“I screwed them, too; I had them drop, too. Not one of them bitched. … Why? Because that’s what’s asked of him; that’s what his job is. Your job is to play. Coaches spend a hell of a lot more time studying tape and everything else. They are trying to put the team in the best position to be successful, not an individual.”

So, yes, when the Bills and Dolphins meet at 1 p.m. Sunday inside Hard Rock Stadium, both Ryan and Williams will have plenty of motivation to prove they were right − even if neither one of them would admit as much.

On the record, Bills teammates this week said nary a negative word about Williams.

“He’s a great friend of mine,” guard Richie Incognito said. “I wish him nothing but the best.” 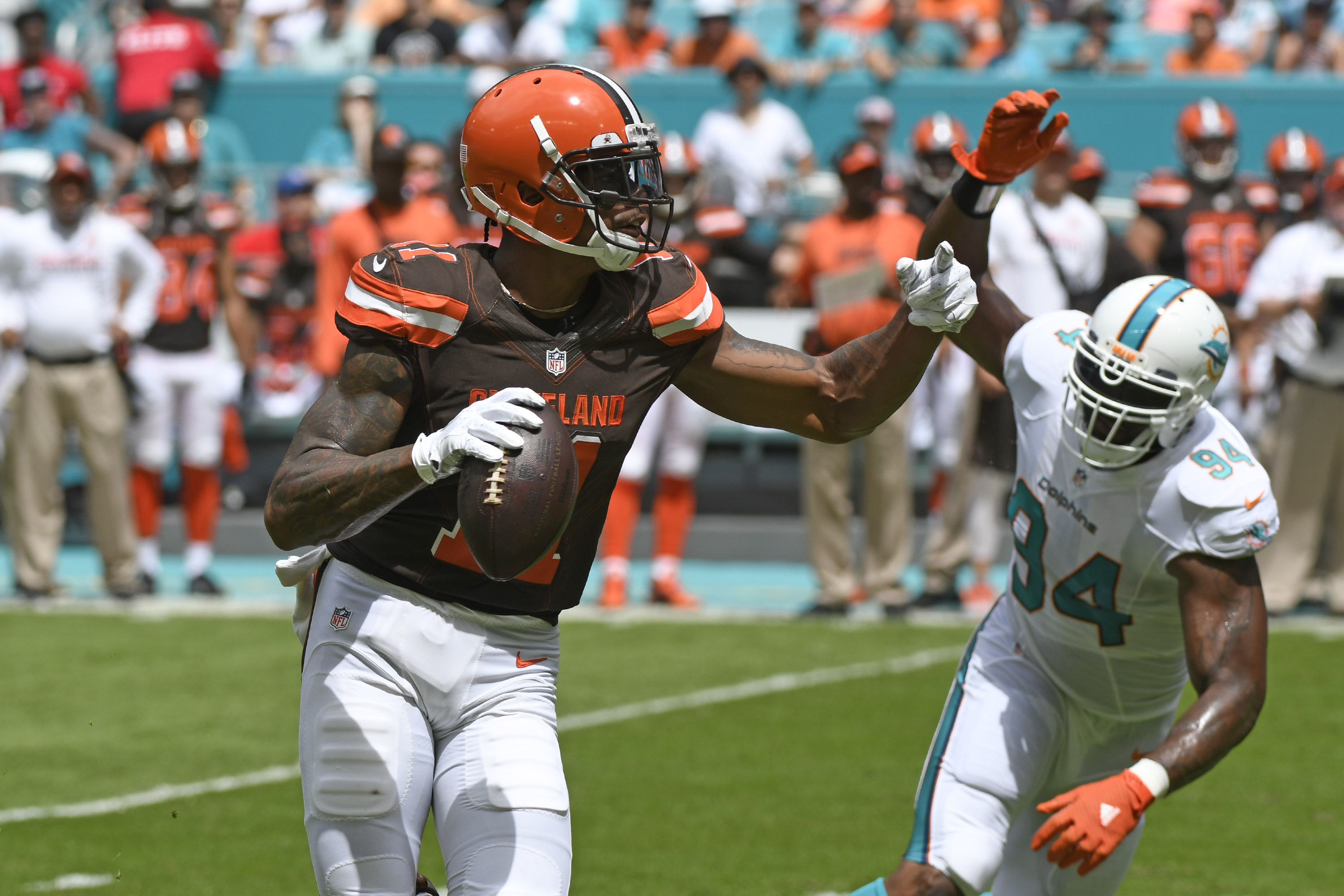 “He’s a hell of a player,” linebacker Jerry Hughes said. “He’s a great athlete. I don’t really want to say too much to poke the beast, because you really don’t want to do that in a division game like this.”

“I see Mario as a friend,” defensive tackle Corbin Bryant said. “He’s a good guy. We talk all the time, so of course I’m going to wish him well. That was my teammate.”

Grant anonymity, however, and the story changes.

“Lorenzo Alexander comes in and he’s leading the league in sacks,” one current Bills player and former teammate of Williams said. “He’s not getting $90 million. He’s getting $900,000. What does that tell you about Mario?

“He was frustrated. That was the biggest thing. Sometimes you can look disinterested. When you’ve been rushing for 10 years and now somebody tells you you’ve got to drop when you’re 30 years old, you’re like, ‘I ain’t gotta do that.’ It was definitely different for him and he felt like it was misusing him.”

Ryan and Williams did their best to sidestep questions about their reunion this week.

“I’ll say this about Mario – Mario’s been a really good football player in this league for a long time,” Ryan said after a pause and a smirk when asked if he was worried whether Williams would actually show up Sunday. “He really has.”

Williams insisted that facing the Bills would not provide any extra incentive.

“The only motivation each and every week that I deal with is simply having the opportunity and the blessing to be out there on Sunday,” he told Miami reporters. “For me, it’s another opportunity just to play football, do what you love and go out there and play. It’ll be great to finally play against the guys live for the first time. I still have a lot of friendships and communication with those guys, so I’m sure it will be interesting.”

The Buffalo media asked to speak with Williams on this week’s conference call, but he claimed to have never received the request. He wasn’t at his locker Friday following practice during the time reporters were allowed inside the room.

That’s not a surprise – Williams did his best to limit his interaction with reporters during his time in Buffalo, too.

That has left teammates to speak about him. Fellow Dolphins defensive end Cam Wake took part in the conference call with Buffalo media, and spent much of the time answering questions about Williams.

“Hell of a guy, great football player, great teammate, and I’m glad that he’s on our side,” Wake said.

But what about those criticisms about his effort, Cam?

“I haven’t had any issues or noticed anything of that nature,” Wake said. “We’re semi-locker mates. We have great conversations, long walks on the beach – all that fun stuff.”

So is Mario extra motivated to face his former team?

“You want to call him? Ask about what he’s got going on?” Wake said. "Honestly, I’m worrying about the quarterback, the running back, what plays they’re playing, how they’re playing, the tackles.

“I’m not a psychologist worrying about other guys and how they feel and what they’re doing. I couldn’t care less about that business, because it doesn’t help me on Sundays. That’s really all I’m concerned about. If you all want to ask him when his birthday is or his astrological sign, maybe you guys should call him and find out about that. It’s not really any of my concern, and this is really a pointless conversation as far as football is concerned.”

Williams’ time in Miami has not gotten off to a great start. He has just one sack in six games, and played just 14 defensive snaps last week against Pittsburgh.

“We made some changes,” Dolphins coach Adam Gase said of limiting Williams. “We’ve been moving some guys around. We’re just trying to find what the best lineup is for what we’re doing. We cut back some of his snaps to try to make sure that we use him as efficient as possible, put him in on some situations where there were more pass-down emphasis and just trying to make sure that when he’s able to go, it’s full go. 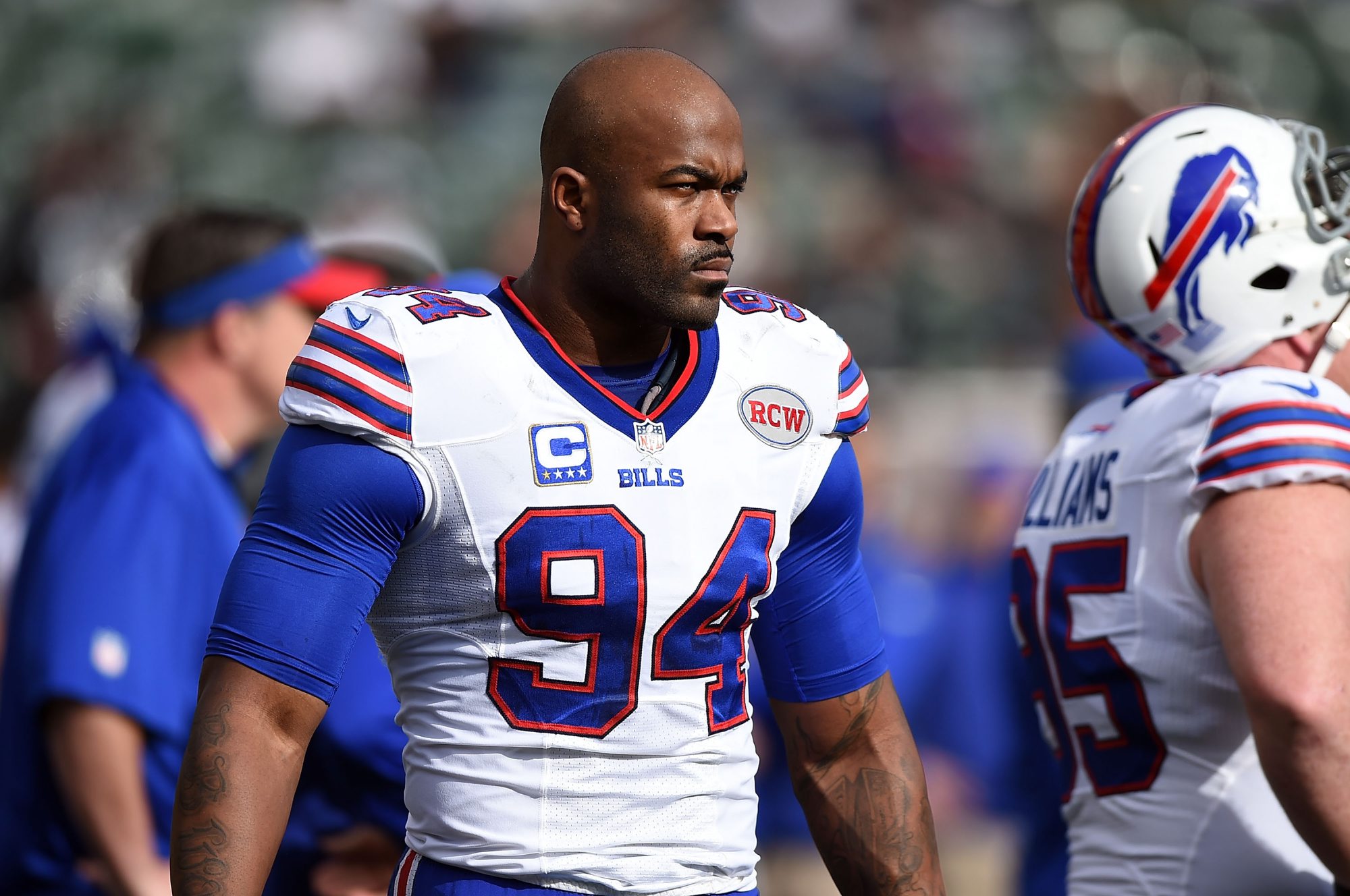 “We’ve had a lot of snaps on defense leading up before this last game. We were averaging close to 75 plays a game on defense and our guys were playing a lot of the run and between Mario and (Jason Jones), they were getting pounded on pretty good. I think it just finally caught up to us as far as those guys taking so many snaps.”

To Williams’ credit, he didn’t rock the boat.

That’s different from openly complaining about dropping into coverage − a sign that Williams may have learned from his last year in Buffalo.

“He’s done a good job in practice and there have been a lot of positives coming out of training camp and through the beginning of the season,” Gase said. “I think some of our issues as far as what has happened to us on defense is we’ve done such a poor job on offense that we left those guys out on the field. When you’re taking on the blockers that they are the amount of times they are, I think our guys got worn down a little earlier than what we needed to. Last week we were just trying to get some fresh bodies going and try to get these guys back to being as healthy as possible and as fresh as possible.”

“It seems like it’s been kind of the M.O. of the free agents that come to Miami − you don’t get their best,” said Dolphins great Doug Betters, the 1983 Defensive Player of the Year. “I don’t if Miami’s just a distraction. They come down there and take the money and don’t put the effort out any more.”

Williams has signed contracts with maximum values of more than $170 million in his career. While he hasn’t seen every dollar of those deals, he’s surely made enough money to go live on an island if that was his preference.

“I don’t know what’s going on in the guy’s head,” Betters said. “He’s got a great opportunity. Miami is a fun town to play in. He certainly has the ability and talent, but something’s not right. It’s happened before. Free agents have gone there and they just self implode. It’s a lot different than New York and the blue-collar work ethic they have up in Buffalo.”

Betters currently lives in Montana, and has a relationship with Bills safety Colt Anderson.

“In the perfect world if you could take Colt’s heart and put it in Mario’s body, you might have Lawrence Taylor of the new millennium,” he said. “It doesn’t work that way unfortunately.” 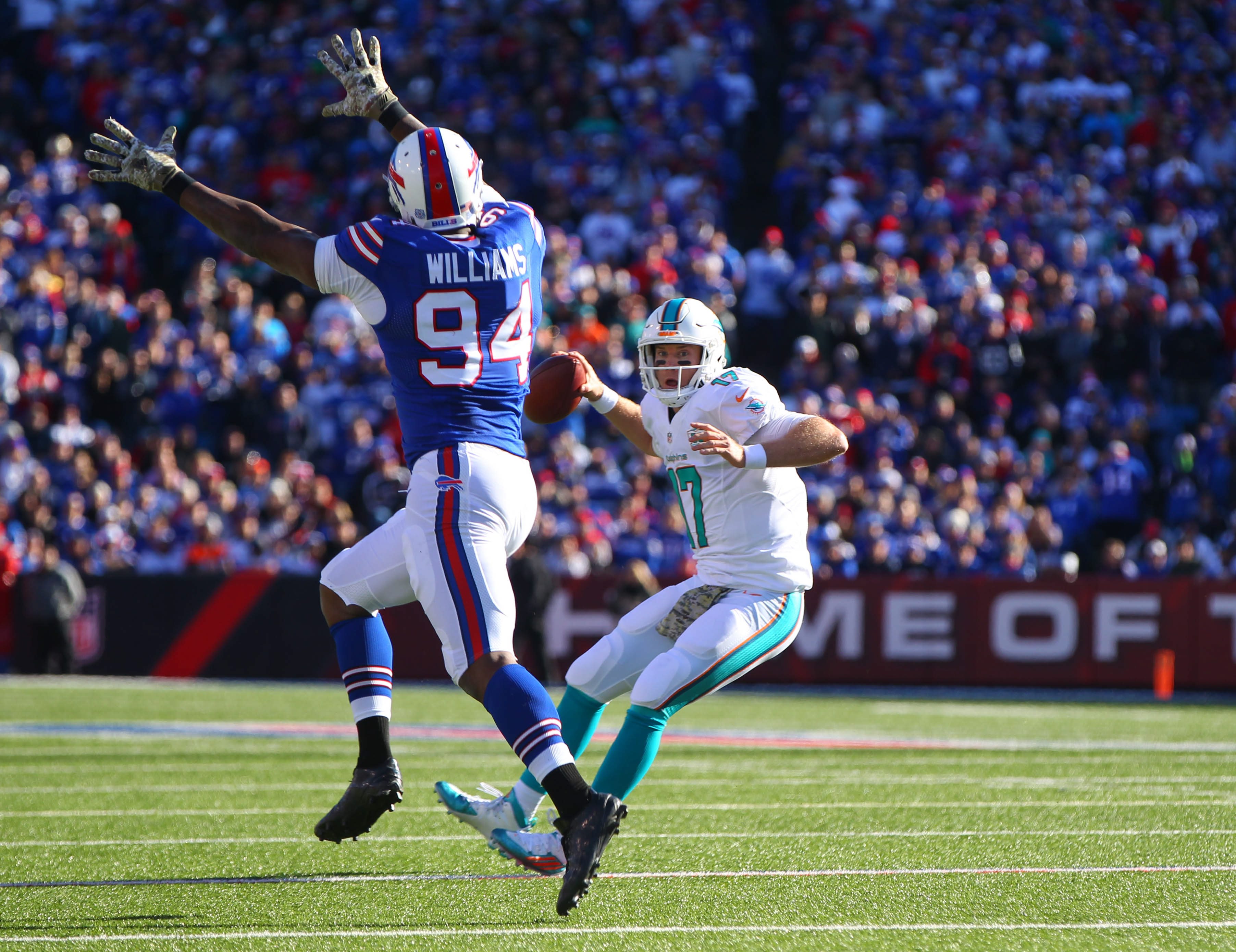 Bills fans didn’t throw a parade the day Williams signed his six-year, $100 million contract on March 15, 2012, but it was reason to celebrate. Landing a player of Williams’ status was a sign Buffalo wasn’t the NFL Siberia it was made out to be.

Former General Manager Buddy Nix cautioned after Williams signed that he would have a difficult time living up to the expectations that came with what was the richest contract ever given to a defensive player at the time. It didn’t take long for those concerns to materialize.

Williams’ first game with the Bills was a 48-28 loss to Ryan’s New York Jets in which he was manhandled by right tackle Austin Howard. Afterward, he complained that Howard blocked him illegally throughout the game.

Williams also dealt with a mysterious wrist injury during his first season in Buffalo. While he never missed practice time, he openly complained about it. Eventually, the Bills were fined for not reporting the injury.

Coach Chan Gailey and his staff were fired after a disastrous 2012 season in which the defense allowed at least 45 points in a game four times. Doug Marrone took over, with Mike Pettine as his defensive coordinator. That’s when things took off for Williams. He had 13 sacks in 2013, then 14.5 in 2014, making the Pro Bowl in both of those seasons.

Beginning of the end

Optimism was high that 2015 was going to be a special year for the Bills’ defense. Ryan came from New York with a pedigree to suggest that improving on the fourth-place finish from 2014 was a realistic goal.

But things unraveled quickly, and Williams vocalized his displeasure with the scheme.

“I think I probably set a record on dropping today,” he said after a 34-21 loss to Cincinnati in Week Six.

As the defense continued to struggle, criticism of Williams continued to mount. That comes with big-contract territory.

“You can’t label one person as the problem,” Bills defensive tackle Corbin Bryant said. “We’ve got 10 other guys out there that are playing. If it was one guy out there that was the problem, then he wouldn’t be playing. Mario started almost every game that he wasn’t hurt in, so he obviously wasn’t that big of a problem.

“He’s a great talent, but things just didn’t work out last year. That’s all that happened.”