A truck breakdown in a Thai jungle.

A bone-rattling ride through rivers and across mountains.

And dozens of hours seated cross-legged on the floors of barren West Side apartments, listening to harrowing stories of escape, assimilation and alienation.

Those were just three of the elements of the 20 months of reporting that went into "From Burma to Buffalo," a series that details Buffalo's largest ethnic influx in decades: the arrival of more than 8,000 refugees from Burma.

The series, which started in Sunday's paper and which continues Friday, originated in talks between chief photographer Derek Gee and Law Eh Soe, a photographer who fled Burma after chronicling the "Saffron Revolution" pro-democracy riots in 2007.

Law Eh Soe planned to return to Burma for a visit early last year, and he invited Derek to join him. Derek told Deputy Managing Editor Stan Evans about the idea, and Stan -- knowing that I have traveled extensively in Southeast Asia and that I would leap at the idea -- asked me to go, too. 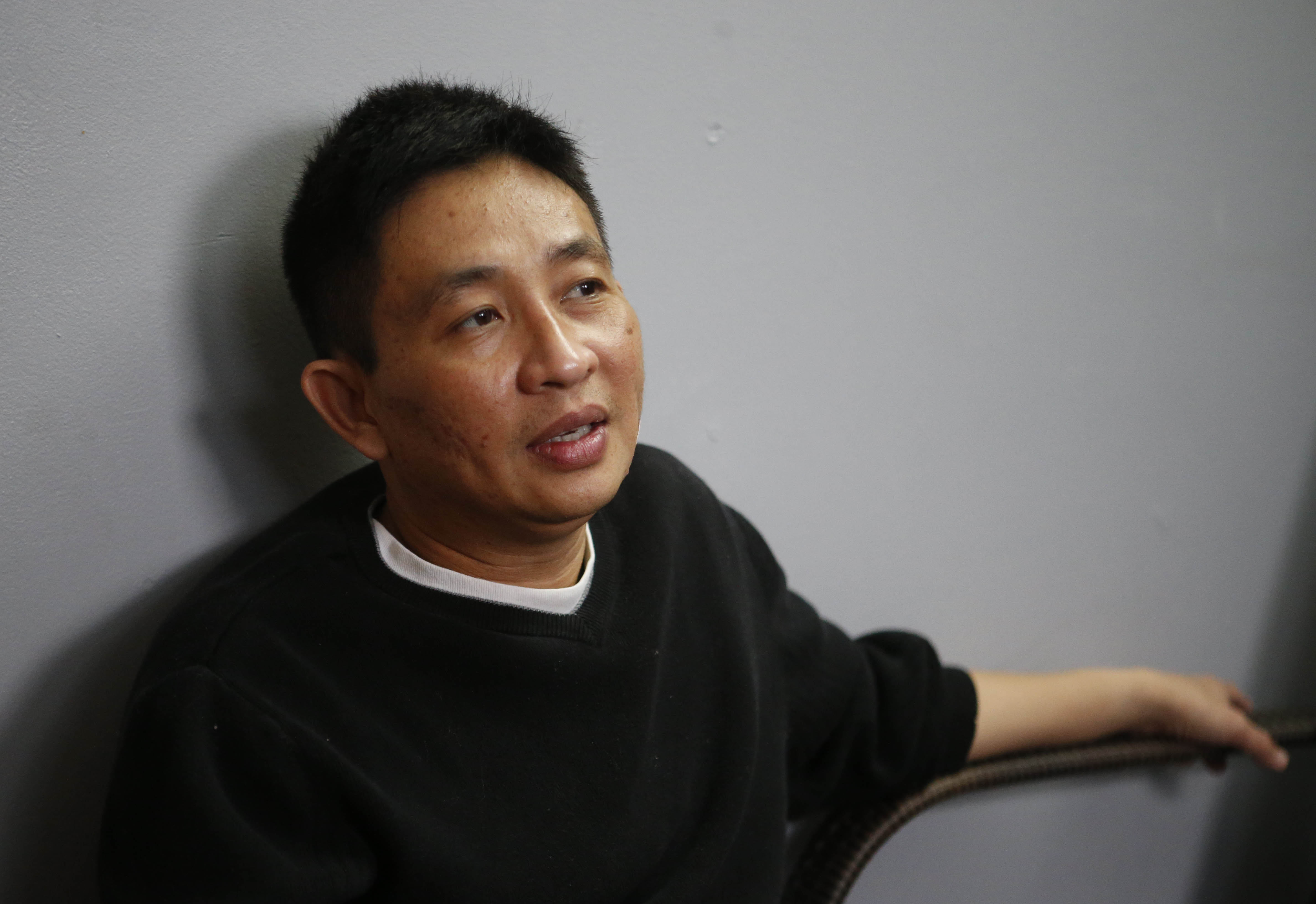 Law Eh Soe, a refugee from Burma, in his Riverside home in Buffalo, Tuesday, Feb. 16, 2016. Law Eh Soe was a photojournalist who was documenting the 2007 "Saffron Revolution" in Burma when the military began targeting journalists and assassinated Japanese photographer Kenji Nagai at a protest Soe was also covering. He was forced to flee the country that night. Now a U.S. citizen, Soe has returned to his native country twice. (Derek Gee/Buffalo News)

Quickly, though, I learned that the story was much bigger than one man's trip home. My preliminary research found that the arrival of the refugees from Burma was changing Buffalo in untold ways -- and that we had to tell those stories.

We never went to Burma with Law Eh Soe. Derek and I applied for visas to visit Burma in the spring of 2015, but months went by without an answer to our application. 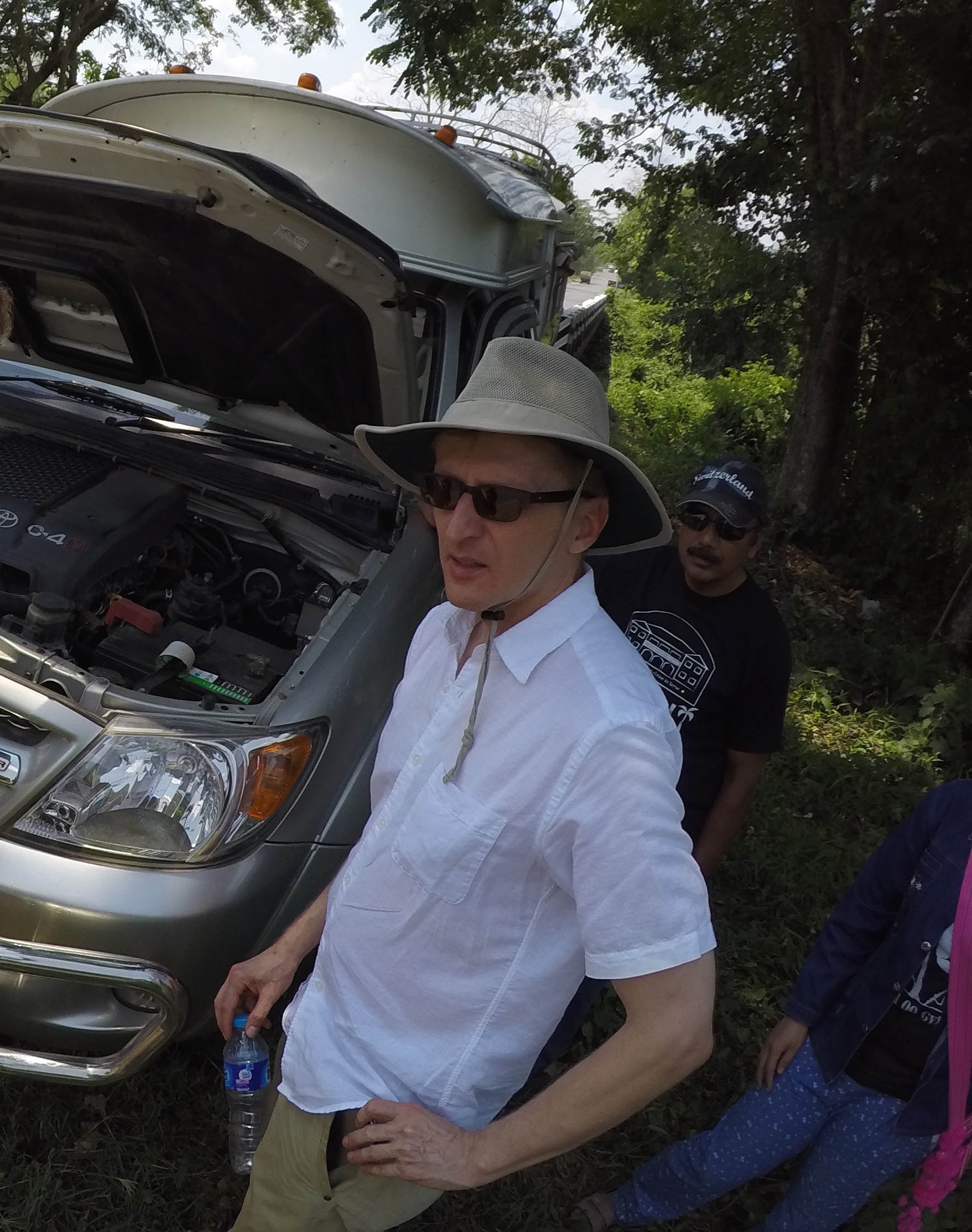 Derek and I decided to go to Asia anyway. A Google search pointed me to a source who pointed me to another source who could get us into the Mae La refugee camp in Thailand, even though the Thai government didn't allow American journalists to visit such camps. So we figured the trip would be worth it even if we never made it to Burma.

We visited Mae La on a sun-drenched day in April 2015 where the heat was so stifling that I nearly passed out in the middle of an interview. But what interviews they were. We talked to people who will spend the rest of their days in bamboo huts strong along a hillside and separated from the outside world by a bamboo fence. We  visited with the mother of a young refugee we had met in Buffalo.

So we were exhausted but ecstatic as our "fixer" -- the source who got us into Mae La -- took the wheel of his battered old truck to drive us the 30 miles back to our base in Mae Sot, Thailand. Well, we were ecstatic until the truck started churning and heaving and chugging before lurching to a complete stop  beneath a tree on a road in the middle of the jungle.

Thai ingenuity got us back to Mae Sot.. The driver we had hired arrived in his SUV with a mechanic, who quickly found a stray bamboo pole on the roadside that he and Derek tied to our driver's vehicle and the disabled truck. 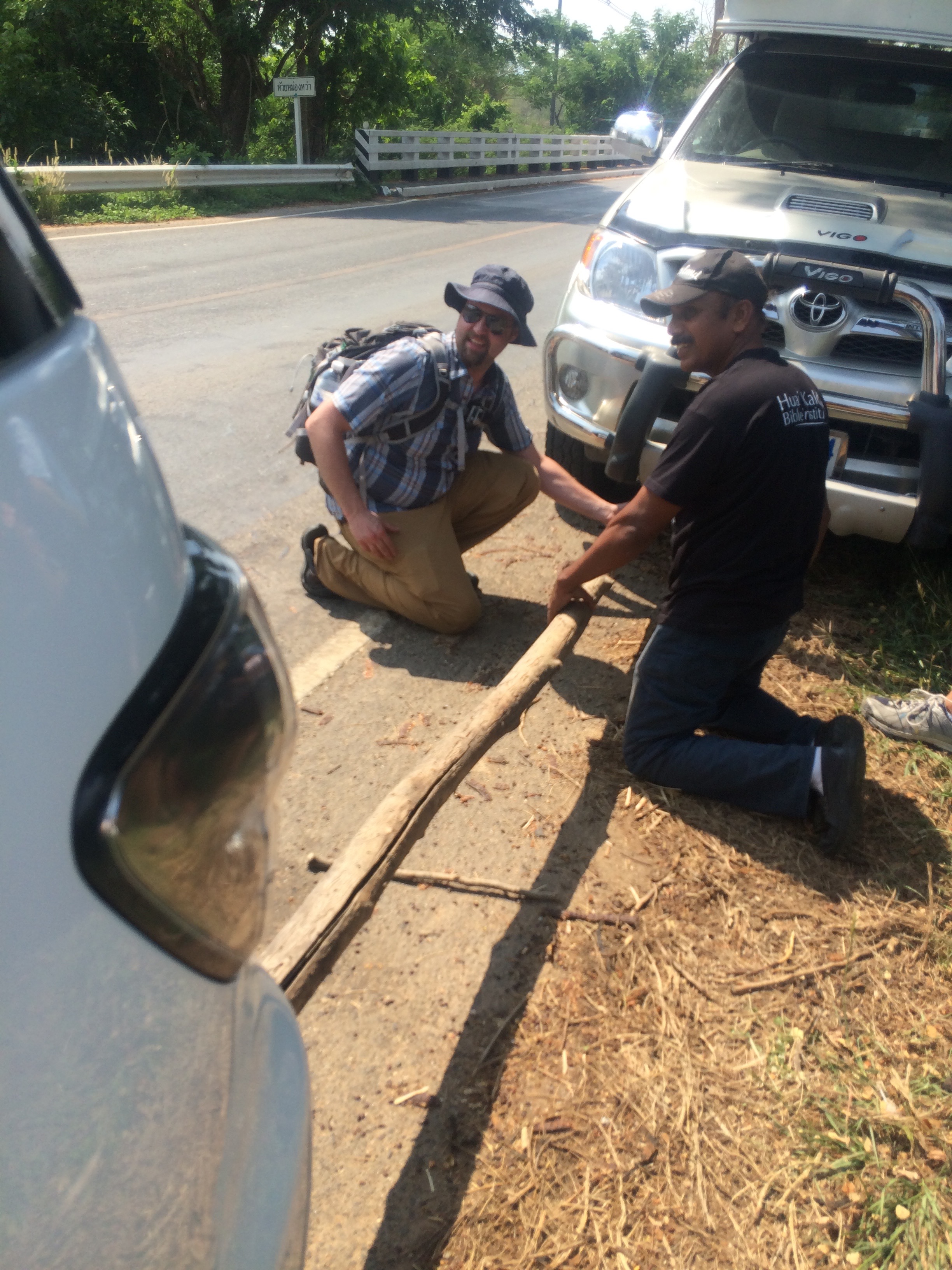 Buffalo News photographer Derek Gee helps attach a bamboo poll to serve as a towing line between a working vehicle and a disabled one. The truck breakdown temporarily stranded Gee and reporter Jerry Zremski in the Thai jungle near the Mae La refugee camp. (Jerry Zremski/Buffalo News)

Off we went back to Mae Sot in a dusty old truck pulled by a bamboo tow line, and just then, our fixer said to us: "Do you want to go to a village in Burma tomorrow?"

So the next day our fixer, in another vehicle, picked us up and drove us about an hour to the south, where we changed vehicles and drove to the river that separates Thailand from Burma. Someone had built a rickety footbridge between the two countries, so we walked across it. No one checked our passports.

A handful of  men in dusty clothing met us on the other side and told us to climb in back of their rusty old pick-up. And so began that bone-rattling ride across mountains and through streams to a village in Burma called Kwee Ler Shu.

We spent the day there, wandering from one teakwood hut to another, interviewing villagers about their life and why they never fled it. One of the women we met was named Mu Je, who said she had a brother in New York State.

Weeks later, after we had returned to Buffalo, I spent two hours sitting cross-legged on the floor of a West Side apartment during the Karen Baptist Church's informal Saturday night service. Afterwards, the pastor asked me to speak, and I began by asking: "Have any of you ever heard of a village named Kwee Ler Shu?"

A slight but sturdy middle-aged man raised his hand and said, in thickly accented English, "My hometown!" 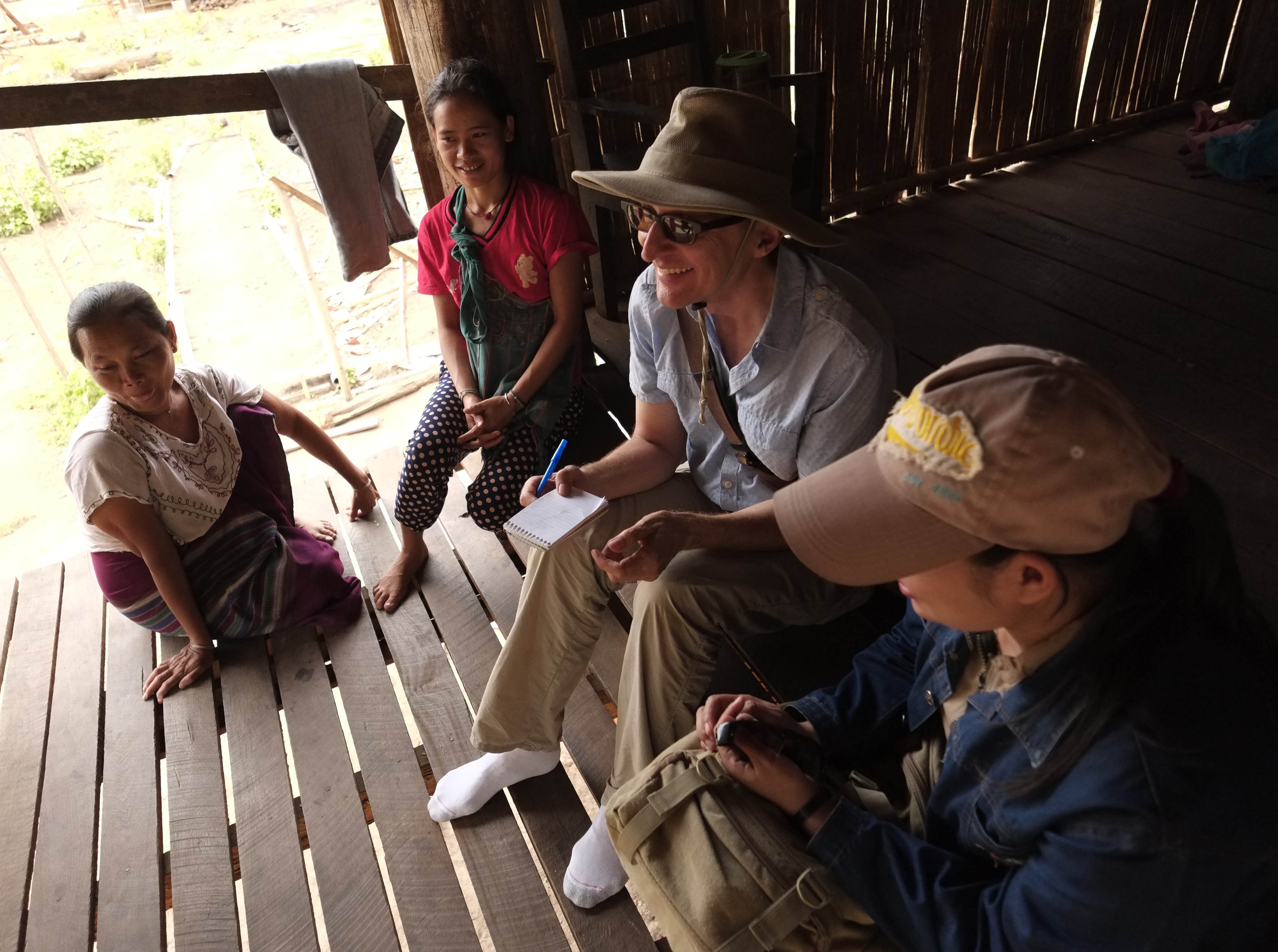 He introduced himself as Nay Htoo, a refugee who came to Buffalo in 2010. He was Mu Je's brother.

Derek and I spent many hours with Nay Htoo over the next few months, filling in details of his story, which we told in the first day of our series on Sunday. I filled in even more in January when I made a detour from my Asian vacation to return to Kwee Ler Shu, where I met with other members of Nay Htoo's family and confirmed details of his journey.

Locals in Kwee Ler Shu greeted me like an honored guest on my second visit, cooking lunch for me over an open flame. Like a local, I ate my curry and noodles and rice with my fingers. 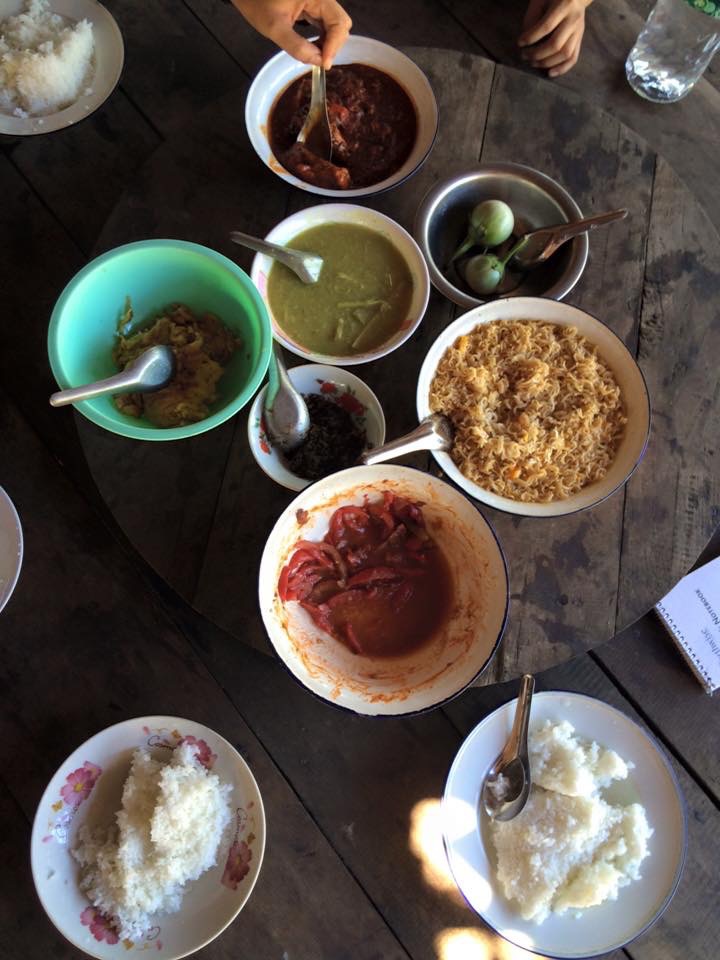 In between, Derek and I finally got our visas to visit Burma legally, which we did in the fall of 2015. We visited Hpa-An, the capital of Karen state, home to most of the refugees in Burma. We visited the monastery that U Pyinya Zawta,  a monk now living in Buffalo, fled during the Saffron Revolution. We visited the squalid camps where Rohingya Muslims lived like prisoners in Sittwe, Burma, as well as the slums in Malaysia where refugees who wanted to move to Buffalo remained stranded.

When we returned, we spoke to Eileen Buckley of WBFO about our journeys -- yet we still had more work to do.

We had to go to Asia to know what the refugees fled, but the most important reporting took place in Buffalo, where we donned Karen ethnic garb for the Karen wrist-tying ceremony, where I got drenched with a water gun at the Burmese Water Festival, where Derek explored the culture at Chin National Day and Karenni National Day and at least a half-dozen other events that showed that these newcomers really know how to celebrate. 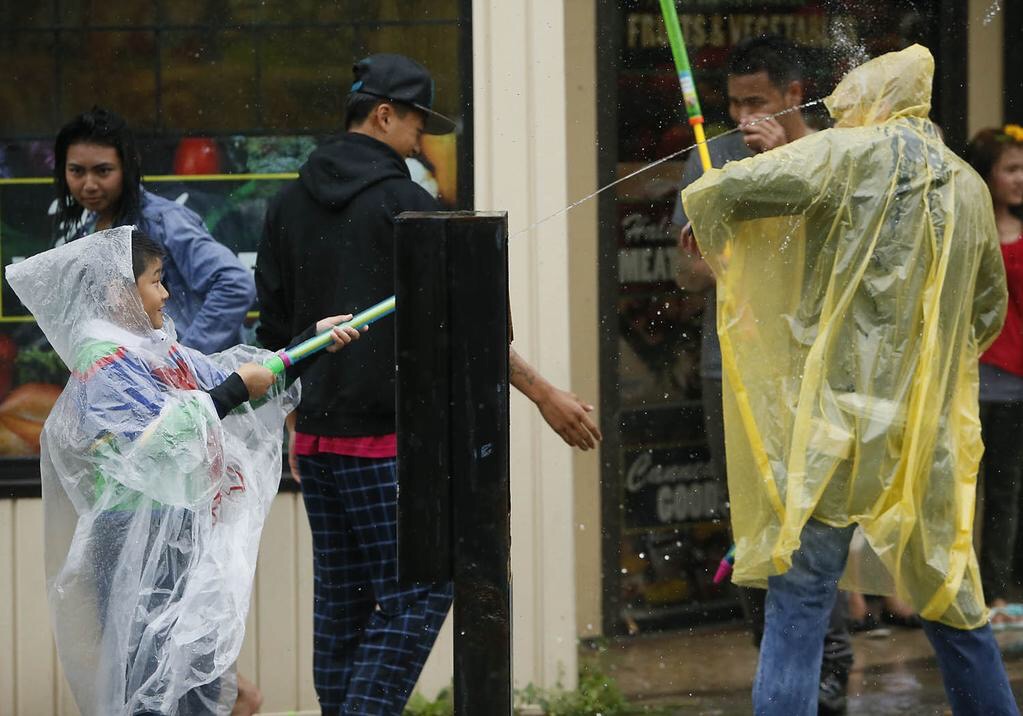 And most importantly, we sat crossed legged on floors, listening for hours on end as Buffalo's newcomers told us their stories. Now it's our job to tell those stories to you, which we will do over the coming weeks.