Five years ago, a prominent, beloved member of the Bills' Super Bowl teams of the 1990s passed away, provoking strong emotions from those who knew him well.

Kent Hull, the intelligent center who many credit with being the main brain behind and backbone of Buffalo's revolutionary no-huddle offense, died on Oct. 18, 2011. A couple days later, News columnist Jerry Sullivan penned a stirring remembrance piece honoring one of the all-time great Bills — both on and off the field.

That column by Sullivan ran five years ago today.

It is reprinted below.

Hull's death puts a hole in many hearts

"I told my wife this: If they called me right now and told me that I had been released, I'd go over there and shake every one of those hands and truly get down on my knees and thank them for this ride." -- Kent Hull, August 1996

Kent Hull was forever grateful for the ride. He never expected to be on it. It had begun 10 years earlier, in 1986, when Jim Kelly rode triumphantly through the city in a limousine after signing his first Bills contract. Hull rode behind in an equipment van, an obscure center from the USFL who figured he would soon be cut.

Hull never took his NFL career for granted. Maybe that's why the people here loved him so much. He once said that walking through the tunnel into old Rich Stadium on game days was the closest thing to seeing his two children born. Hull said it felt like gliding.

I remember doing that interview on a couch in Hull's modest condominium in Orchard Park. He didn't need a big place, because he had one in his native Mississippi. Hull dreamed of settling down on his 2,000-acre farm, working the land his father had bought when he was a boy. But he loved Buffalo. He pointed out the window of his condo on that summer day, 15 years ago, and said he wished he could put the farm right there, so he could stay.

He felt a connection with the town and the people who watched him play for 11 seasons. When I spoke with players for a Super Bowl retrospective early this year, that was what they held dear, not so much the wins but the bond they shared with each other, and this community.

So there were a lot of heavy hearts in the extended family of Bills football Tuesday, when the news came that Hull had died at age 50 in Mississippi. The coroner in Leflore County, Miss., said on Wednesday that the cause of death was gastrointestinal bleeding. Hull had told me last January that he needed a liver transplant.

His death hit hard with his fans, his former teammates, and even the reporters who covered him through the years and considered Hull the ultimate go-to guy, an honest, gentle giant who was always there with the right quote.

Steve Tasker said Thurman Thomas, who made the Hall of Fame running behind Hull, was crying so hard on the phone Tuesday he could barely understand him. Darryl Talley said his daughter was crying over the phone with Bruce Smith's son. 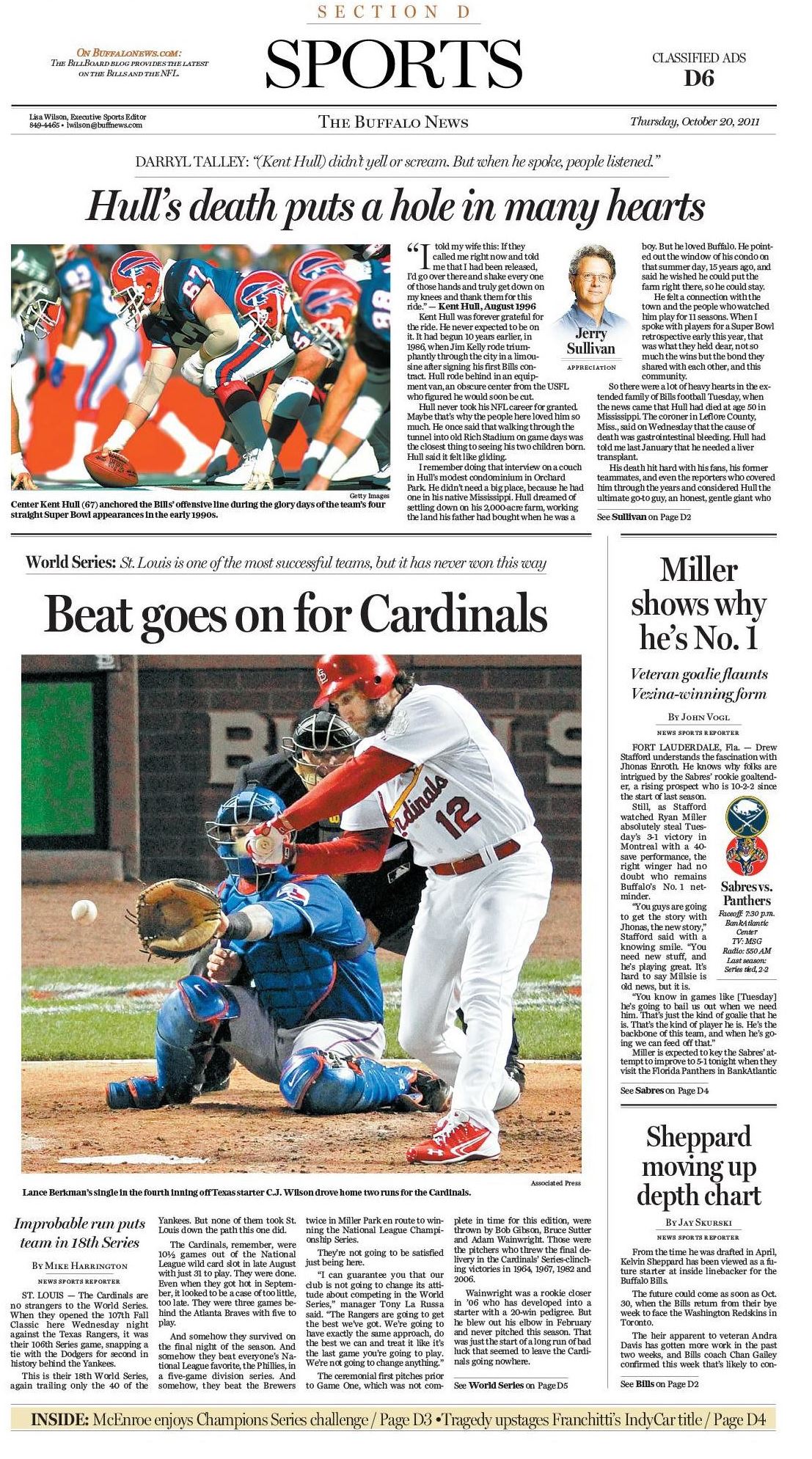 "It was amazing," Talley said Wednesday morning. "Those kids grew up with Kent. Now it's like they can't believe he's not here."

It's a death in the family. Mitch Frerotte died in '08. But Hull is the first major figure from the Super Bowl teams to go. You see his age -- 50 -- and realize how much time has passed. They're not boys anymore. They're middle-aged men. It's a jarring reminder of our own mortality.

"It really is," Ray Bentley said. "Any time one of your peers dies, it gives you pause to reflect on things."

Hull was the center of it, in many ways. He went to three Pro Bowls, four Super Bowls. He was the axis of the no-huddle, the man responsible for making the line calls for an offense that was ahead of its time and opposing defenses.

Hull was one of the best ever to play center. If he had played longer, and if the Bills had won a Super Bowl or two, he might have been a Hall of Famer. But in the locker room, he was revered as a decent man, a tough, smart player, and a great teammate and leader.

"He didn't yell or scream," Talley said. "But when he spoke, people listened. You remember the old E.F. Hutton commercial? That was Kent. He'd just shake his head, look at you and sit down to talk. And you damn well listened. He was a very old soul who was really calming in a storm.

"I called him 'Tough,' " Talley said, "because he was one of the toughest guys I ever saw. He dealt with pain on a consistent basis. But it didn't matter. He knew he had a job to do and he was going to do it. He'd get hurt and say, 'I can't come out of the damn game.' He instilled that mentality in the rest of the O-linemen. He held them to that standard."

Hull did a lot of moving. That was a key to the no-huddle, mobile linemen creating holes on the run. He deflected praise to Kelly, Thomas and Andre Reed, the stars. But it was his intellect that initiated the attack.

"No way we could have run no-huddle without Kent," said Glenn Parker. "He made it go. He could make calls on a dime, get the call out to us. There were centers who couldn't do that. He was one who could."

"As long as Jim had his hands under his [butt], we had a chance," Talley said. "He was truly a man among boys. We were the only team, besides Houston, that sent five receivers out in those days. He had responsibility for blocking schemes and everything. And if Jim got knocked stupid, he would turn around and tell him, 'We don't have the personnel to do that!' "

The Bills were a supremely talented but volatile bunch in those days. Hull had a wild streak of his own, but as Talley said, he was a tranquil presence amid the storm.

"You can't hide what you are in the locker room," Tasker said. "You can't be a phony. I remember a bunch of times thinking to myself, 'What Kent said is what I should think.' I adopted his opinions as my own."

Hull had no agenda. He was straight, thoughtful, structured. He did crossword puzzles in the locker room before games to calm his nerves. He was real. He understood Buffalo and its people.

"People saw Kent's passion for the Sabres," said Vic Carucci, the former Bills beat writer who now works as senior editor for the Browns. "They saw that he and Will Wolford didn't want to sit in the suites. They wanted to be in the stands with the masses. We loved that this southern boy from Mississippi loved hockey.

"You know how writers are," Carucci said. "Kent did our jobs for us in so many ways. Maybe you had to move the pen a little bit, but his quotes just jumped onto your notebook and into your story."

That was the case from the time Hull showed up at Mississippi State as a 185-pound freshman, secretly wishing he could play basketball for the Bulldogs, like his father, Charles.

Rick Cleveland was a rookie reporter in Jackson when Hull was a freshman at State. Even then, Kent was a "go-to guy," someone a reporter could rely on for insight and perspective. Cleveland followed Hull's pro career. He covered all four Super Bowls. Once, he showed up late for a group interview on Media Day.

"You know how it is," Cleveland said. "People are shouting and interrupting. Kent saw me in the back and he just stopped. He stood up, reached over people to shake hands and said, 'Rick, what do you need?' I was no big national guy. It wasn't doing Kent any good. But it did a lot for me."

Cleveland said he cried for the first time in quite awhile when he got the bad news Tuesday. I cried, too. Talley was the first one to call, naturally. He was struggling with it, barely able to put a sentence together. We decided to wait until the morning.

Talley was so upset, his wife, Janine, said he should postpone his business trip across Florida on Wednesday.

His voice broke. "There's a big hole in a lot of our lives right now. And it's going to be there for awhile."