Acting District Attorney Michael J. Flaherty Jr. said he is considering whether to conduct a criminal investigation into the 2012 death of Richard Metcalf Jr. – as the state agency that regulates local jails urges him to do.

Metcalf died at Erie County Medical Center after being removed from the Erie County Holding Center, where the state agency says Metcalf was suffocated by jail deputies who improperly restrained him.

But even if Flaherty begins a probe, his days as Erie County's top prosecutor are numbered. It's likely that any effort to hold a jail deputy responsible for Metcalf's death will remain unresolved when Flaherty leaves office Dec. 31.

One of the local lawyers campaigning to replace Flaherty says he fully intends to take up the matter.

"I definitely feel that, based upon the findings of the report, an investigation is warranted," said John J. Flynn Jr., a Democrat who defeated Flaherty in the party primary and currently holds the inside track to become Erie County district attorney in 2017. Flynn was referring to the State Commission of Correction report that concluded Holding Center deputies suffocated Metcalf.

To prevent him from spitting blood at them, deputies knotted a "spit mask" around his neck, blocking his airway, the commission said. When Metcalf chewed through the mask, deputies placed a pillow case over his head, put him face down on an ambulance gurney and blocked Rural/Metro medics from assessing him for several crucial minutes, the commission said. 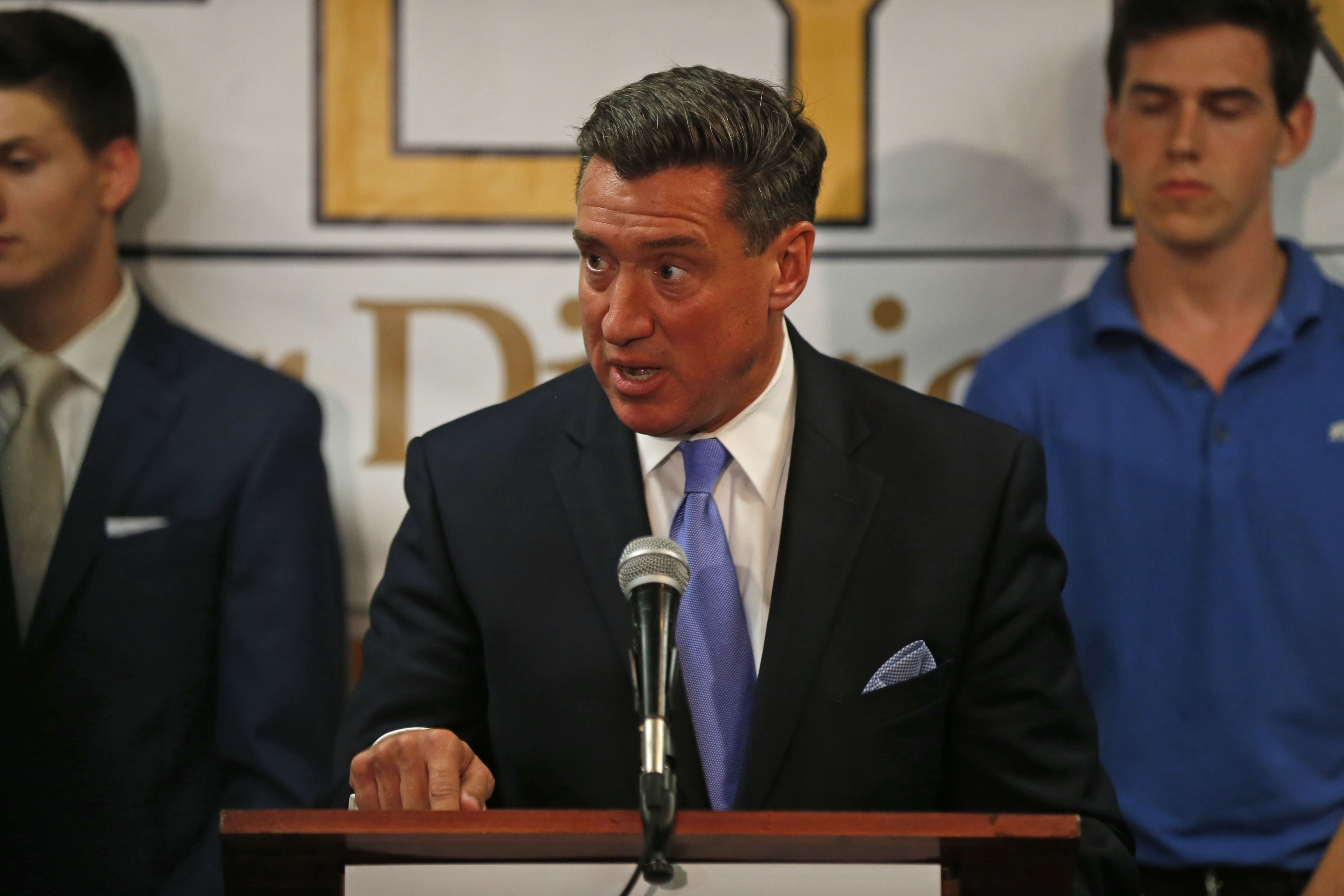 John J. Flynn Jr.: "Based upon the findings of the report, an investigation is warranted." (Robert Kirkham/News file photo)

When the medics finally lifted off the pillow case and cut the spit mask free, Metcalf was in cardiac arrest, and his face was bloated and cherry red, the state report said. The medics had been called to bring an erratic, self-injuring inmate to the Erie County Medical Center for treatment and another mental evaluation. But realizing he was near death, the medics hurried the 35-year-old Metcalf to the nearest hospital, Buffalo General Medical Center, around 11 p.m. on Nov. 28, 2012.  He later was transferred to ECMC and pronounced dead on Nov. 30 of that year.

The commission said in its 25-page report that the death had the classic elements of "traumatic asphyxia" and was not caused by a heart attack, as a past medical examiner found. The commission also told Sheriff Timothy B. Howard that Metcalf would have survived had his personnel acted properly and he had better procedures in place.

When the report went public this week, Howard's administrators refused to answer detailed questions about it because, they said, a wrongful death lawsuit is pending. But they added in a written statement that they dispute the commission's findings and look forward to defending their office and their jail deputies in court.

Howard's team showed no sign that it will follow the commission's recommendation to investigate the sergeant who placed the spit mask on Metcalf and a second sergeant who, the state agency said, failed to properly supervise the use of force on the inmate.

In one of its most pointed criticisms, the commission said the Erie County Medical Examiner's Office needs to reclassify the death as a homicide caused by asphyxia, not a homicide caused by a heart attack combined with: multiple blunt force injuries, the stress those injuries imposed on Metcalf; and his existing liver disease.

The county Medical Examiner's Office said this week said the report presents no new information, and Dr. Dianne R. Vertes' conclusions from 2012 will not be changed.

Flynn said the medical examiner's findings do not dissuade him from pursuing an investigation, nor does the fact that former District Attorney Frank A. Sedita III chose not to place charges after the State Police gave him their investigation report. Information from the State Police inquiry appears throughout the Commission of Correction document.

Flynn said he will investigate the death should he be elected district attorney.

"This needs a fresh set of eyes," said Flynn, who explained he will nonetheless talk to any county prosecutors who were involved in past decisions about Metcalf to learn why those decisions were made.

After the Commission of Correction urged him to "initiate a criminal investigation," Flaherty issued a statement saying he sympathizes with the Metcalf family and is "discussing with my colleagues our next course of action."

"It would be inappropriate for me to offer any further comment at this time,” he said.

However, Flaherty met Wednesday afternoon with a team of lawyers pressing the wrongful  death lawsuit against the county. The lawyers were willing to share with Flaherty any information he might need for a criminal case. Thomas J. Casey is one of those lawyers who huddled with the district attorney for about 45 minutes.

"The impression I got from him, besides that he is taking it very seriously, is that within a reasonable amount of time he should have some decision about what he may do," Casey said of Flaherty.

As the Democratic nominee, Flynn has an edge over the Republican-Conservative candidate in the race, if past results indicate future outcomes. Erie County elects its district attorneys in presidential election years, which bring out more Democratic voters in a county that already skews Democratic. 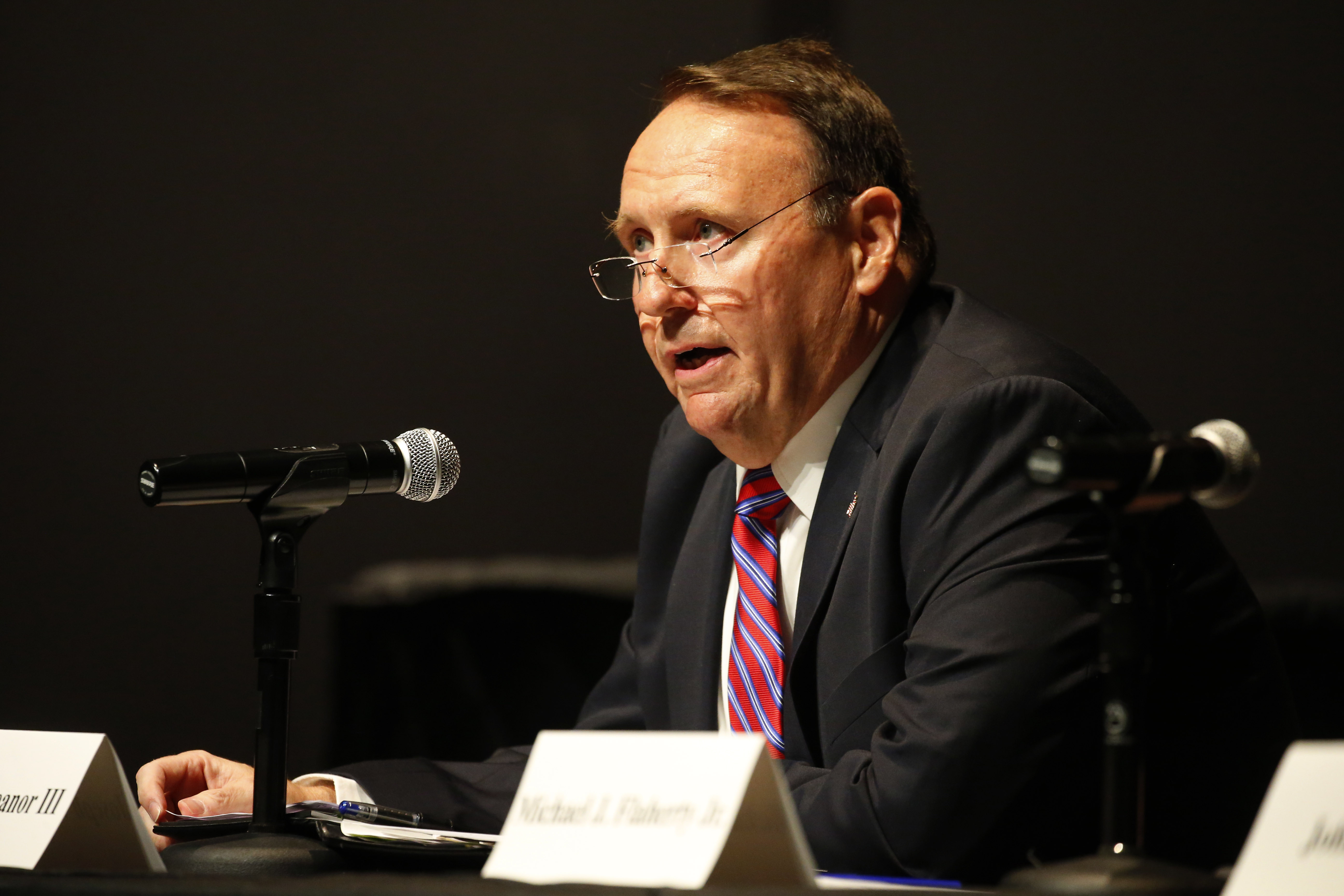 Joseph V. Treanor III: "It would be improper for me to prejudge or comment upon any case that could potentially come before me as a future Erie County district attorney." (Mark Mulville/News file photo)

While Flynn's opponent, Joseph V. Treanor III, spoke of Metcalf's "very sad and troubling demise," he was guarded about what he would do if he wins in November. Treanor is enrolled as a Conservative, but the Republican Party  selected him to run on its line as well. Treanor has balked at criticizing others, including other elected officials and even his rival in the DA's race.

"Nobody is above the law," Treanor told The News. "...Moreover, throughout my career, I have repeatedly demonstrated the moral courage to 'do the right thing,' regardless of personal cost or criticism," he said, referring to his 28 years as a military lawyer with the Air Force.

"Beyond that," Treanor said, "because I am not privy to the case file or actual evidence, and also because law enforcement personnel often encounter extreme challenges not typically discussed or fully known to most in the general public, it would be improper for me to prejudge or comment upon any case that could potentially come before me as a future Erie County district attorney."