Poorly trained deputies at the Erie County Holding Center – not a heart attack – killed inmate Richard Metcalf Jr. in November 2012, a state agency says as it urges the district attorney to begin a criminal investigation and the U.S. Justice Department to again examine the Sheriff's Office for civil rights violations.

"Metcalf's death was a homicide caused by the restraint methods used by the Erie County deputies," says the state Commission of Correction, which polices local jails in New York and dispatches its "Medical Review Board" to examine deaths behind bars. The team of doctors found that "traumatic asphyxia with compression of the torso and neck" took Metcalf's life.

Not only did the jail deputies cut off Metcalf's airway by knotting a mask around his neck to prevent him from spitting blood, they laid him face down on a stretcher with a pillow case over his head, making it harder for him to breathe, the commission said in a 25-page report.

Jail deputies then refused to let ambulance medics turn him face up or remove the mask to examine him, even as the sound of his breathing faded away, the commission said.

In the list of new safeguards it expects from Sheriff Timothy B. Howard, the commission said he should prohibit his personnel from again interfering with an emergency medical crew.

When questioned by investigators, none of the deputies remembered who tied the spit mask around Metcalf's neck, the report said, and they tried to blame the ambulance medics – not those in their own ranks – for keeping the inmate in the prone position.

Deputies told investigators they had to keep Metcalf's head covered as they and the medics wheeled him from an upper floor to an elevator and finally out to an ambulance because he was struggling throughout and likely to spit more blood. But the medics from Rural/Metro told investigators that Metcalf, whose hands and feet were bound, went quiet while in the elevator. Video of him being wheeled along shows no sign of him resisting.

Ambulance medics were told to keep the pillow case around Metcalf's head until he was in the ambulance, the commission said. Once inside, the medics found a spit mask pulled so tight they needed scissors to remove it. Autopsy photos of Metcalf's bruised and bloated face show marks left by the strings, the report says. 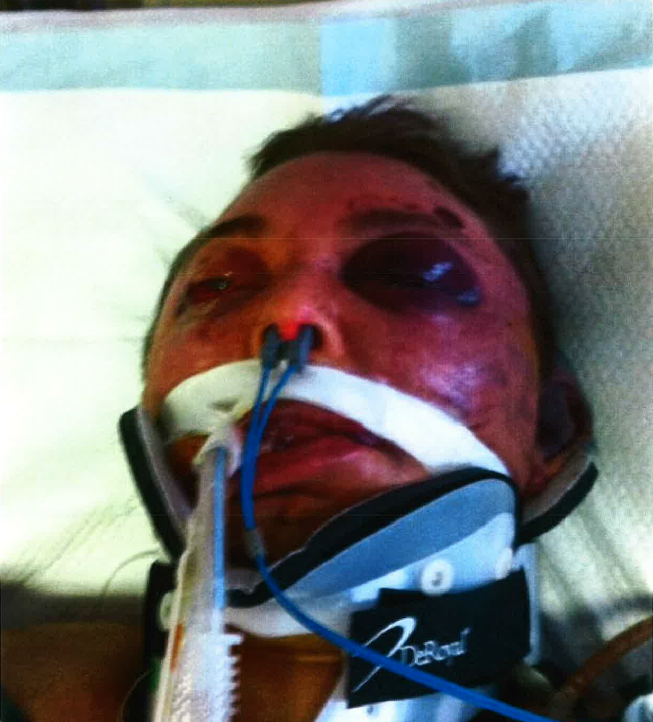 Richard Metcalf in a hospital bed shortly before he was declared dead. (File photo)

The Commission of Correction approved the report at its September meeting, and The Buffalo News obtained it days ago under the Freedom of Information Law. The commission also sent it to various law enforcement agencies expecting that they would heed its findings. But they were not ready to indicate what they might do.

When Frank A. Sedita III ran the district attorney's office, he chose not to press charges in Metcalf's death. On Tuesday, Acting District Attorney Michael J. Flaherty Jr. said the matter is again under discussion inside his office. He is  to meet with the lawyers pressing a wrongful death lawsuit against the county on Wednesday afternoon, one of the lawyers said.

The U.S. Justice Department, which in 2009 sued Erie County to force more humane conditions in its jails and correctional facility, also said officials are reviewing the report.

Howard and his staff, who fought the Justice Department lawsuit, did not answer a Buffalo News inquiry about the matter but put out a statement Tuesday afternoon saying they dispute the commission's findings and look forward to defending the Sheriff's Office and the jail deputies in court.

Meanwhile, the Medical Examiner's Office, overseen by County Executive Mark C. Poloncarz, said it would not issue a new cause of death. Dr. Dianne Vertes, who has left county employment, found that Metcalf died of a heart attack . But she also found  that  “multiple blunt force injuries with associated stress” was a secondary cause and she eventually deemed the manner of death a homicide. But because there is no new information that was not  available to Vertes, the cause "will not be amended," the office told The News in a written statement.

"The one positive of this whole situation is the Commission of Correction is concerned about what happened to Mr. Metcalf,'' said attorney Jim Brown of the Brown Chiari law firm. Brown's firm and Thomas J. Casey, the Metcalf family lawyer, are pursing a lawsuit against the county that describes a scenario much like the one outlined by state officials

Brown called the state report – while four years in the making – the first serious effort by a government agency to determine what happened to the 35-year-old Walmart clerk whose body, as captured in autopsy photos, was left badly bruised after only 32 hours in the Holding Center. One photo shows three deep-purple hematomas, one roughly the outline of a football, along his left rib cage. Broken ribs were also found. Brown said that none of the force used against Metcalf took place under the watch of a video camera.

Though he had never been diagnosed with a mental illness, something was clearly wrong with the way Metcalf was thinking when he jumped through a window on Nov. 25, 2012, and two days later broke into the Joseph’s Country Manor and Grove, not far from the apartment he shared with his girlfriend in Lancaster. Despite the cold temperatures, Metcalf had left his home in bare feet and wanted to cool down in the Manor's walk-in refrigerator.

Depew police hit him twice with a Taser when he reportedly refused their orders and came at them with a metal wrench. They took him to the Erie County Medical Center for an evaluation, then back to their police station where he was seen smearing feces on himself and on the cell floor. A detective later told investigators he thought Metcalf was mentally ill or on some drug. Metcalf  would later report that he was a regular marijuana user and had smoked that day. He kept revealing paranoid thoughts that someone was out to get him.

When he arrived at the Holding Center on the afternoon of Nov. 27, 2012, Metcalf was immediately taken to a shower to remove the feces. Something went awry there because jail deputies had to take him to the cell floor with force, according to the state report. Later that same day, he was again brought to the medical center after some type of  assault.

The Commission of Correction said that after two visits to an emergency room within 48 hours, Metcalf should have been given a psychiatric evaluation when he returned to the Holding Center. But he was not given one. On the evening of Nov. 28, 2012, he was reportedly saying he was "radioactive," repeating the words "slaughter house" and, according to jail personnel, picking at his arms with a plastic fork, drawing blood and refusing to willingly go to the medical unit.

A team of about a half-dozen deputies then began a "cell extraction" to forcibly remove him. They got him walking to an elevator and then to a medical unit, but somewhere along the way he began spitting blood – as he had done the week before, according to his medical history. When deputies got him to an examination room, the spit mask went on. Metcalf chewed through it. Then someone went for a pillow case. Metcalf was more forcibly subdued. And a decision was made to take him again to a hospital.

It was supposed to be ECMC. But the medics realized time was of the essence. They took him to the closer Buffalo General Medical Center. When he arrived, he had been in cardiac arrest for at least 10 minutes, the commission said. He was transferred to ECMC and deemed to be brain dead, Brown said.  His family signed a "Do Not Resuscitate" order, and he was pronounced dead at 5:17 p.m. on Nov. 30.

The commission called it a death that could have been prevented and laid many issues at Howard's feet.  The agency said jail deputies did at least four things wrong as they tried to keep Metcalf from spitting blood in their direction: Pillow cases are not to be placed over someone's head; spit masks are to be used with "restraint chairs," which allow an inmate's torso to remain upright; they are to be tied behind the head, not around the neck; and the manufacturer's instructions say  they are not be used with an inmate spitting up blood.

The panel told Howard to mandate that his jail deputies comply with his office's rules on the use of spit masks and to impose an order that his staff "should not interfere with emergency medical services when they are attempting to assess and administer medical care ... unless there is a serious and immediate threat to the safety and security of the  facility."

Among its other "recommendations," the state agency wants Howard to investigate two sergeants, one who applied the spit mask and another who failed to properly supervise the use of force on the inmate. While the report redacts the sergeants' names, lawyers Brown and Casey named Sergeants Matthew Cross and Robert Dee in their lawsuit. Also named are seven deputies: Scott Evans, Michael Anderson, Matthew O’Connell, Edward Kawalek, Robert States, Scott Emerling and Richard Frys.

The commission blamed the Sheriff's Jail Management Division for lacking an "adequate crisis intervention plan" for inmates undergoing acute psychosis with violent behavior.  The commission's medical review board had insisted on such a plan after the 2002 death of Holding Center inmate Michael Bennett, who died under similar circumstances. The county paid $1 million to settle a lawsuit in that matter. Both Metcalf's and Bennett's deaths appear similar to that of India Cummings, a 27-year-old woman from Lackawanna who died after suffering severe injuries during a 20-day stay in the Holding Center early this year.